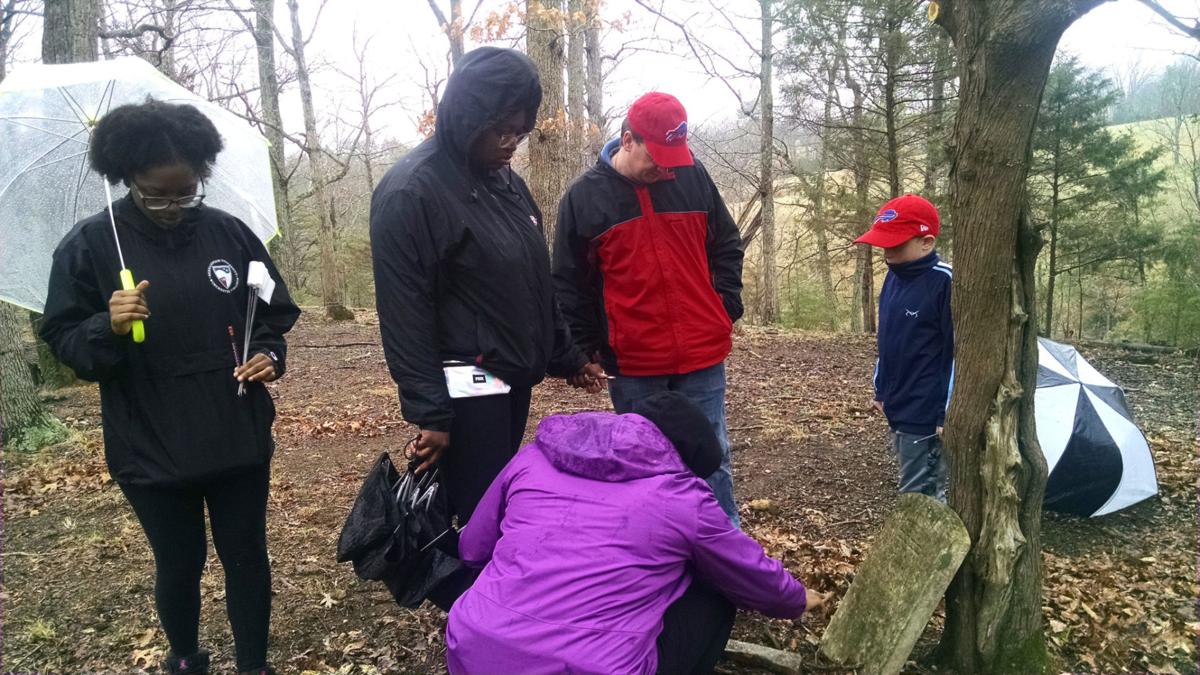 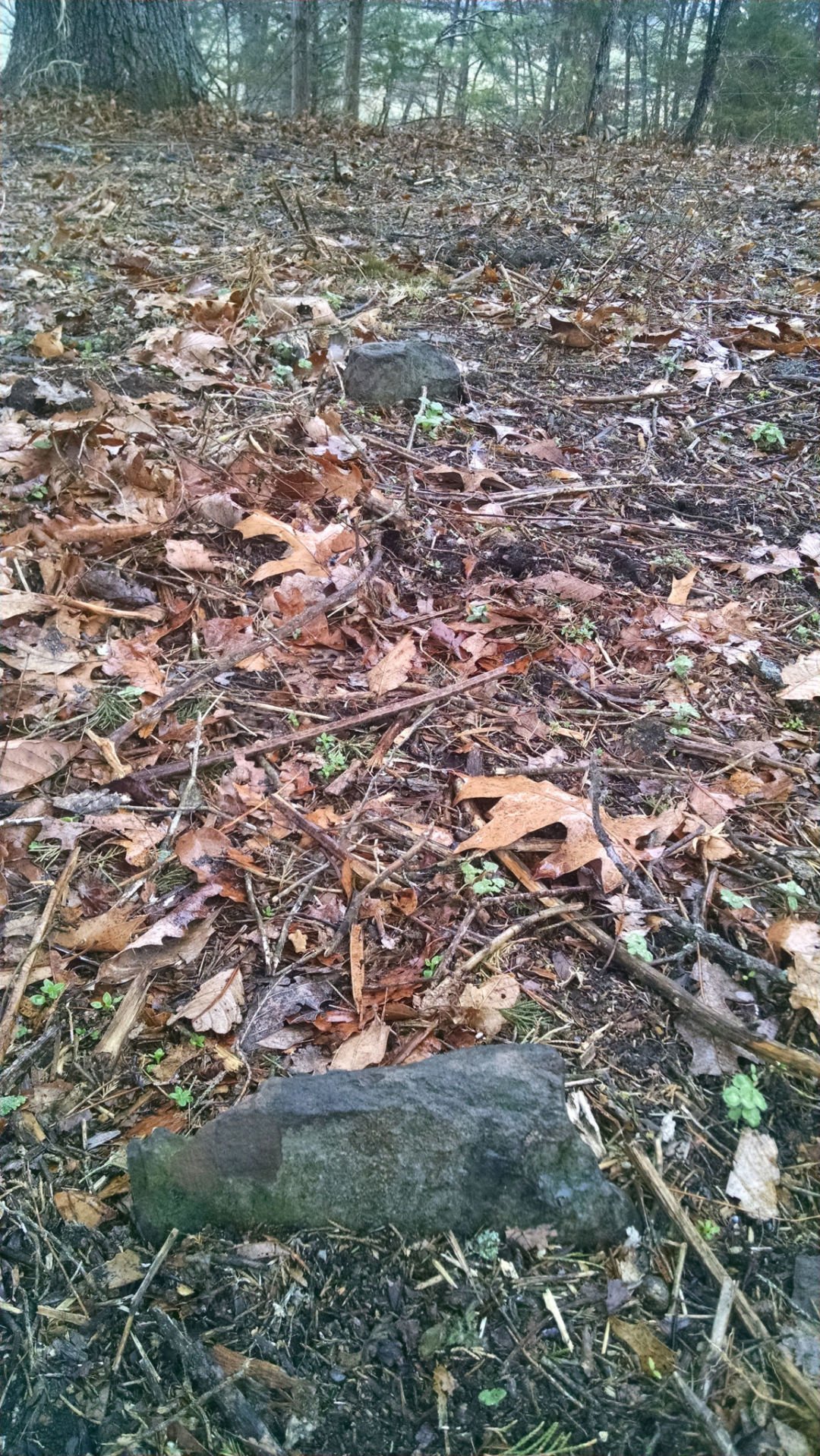 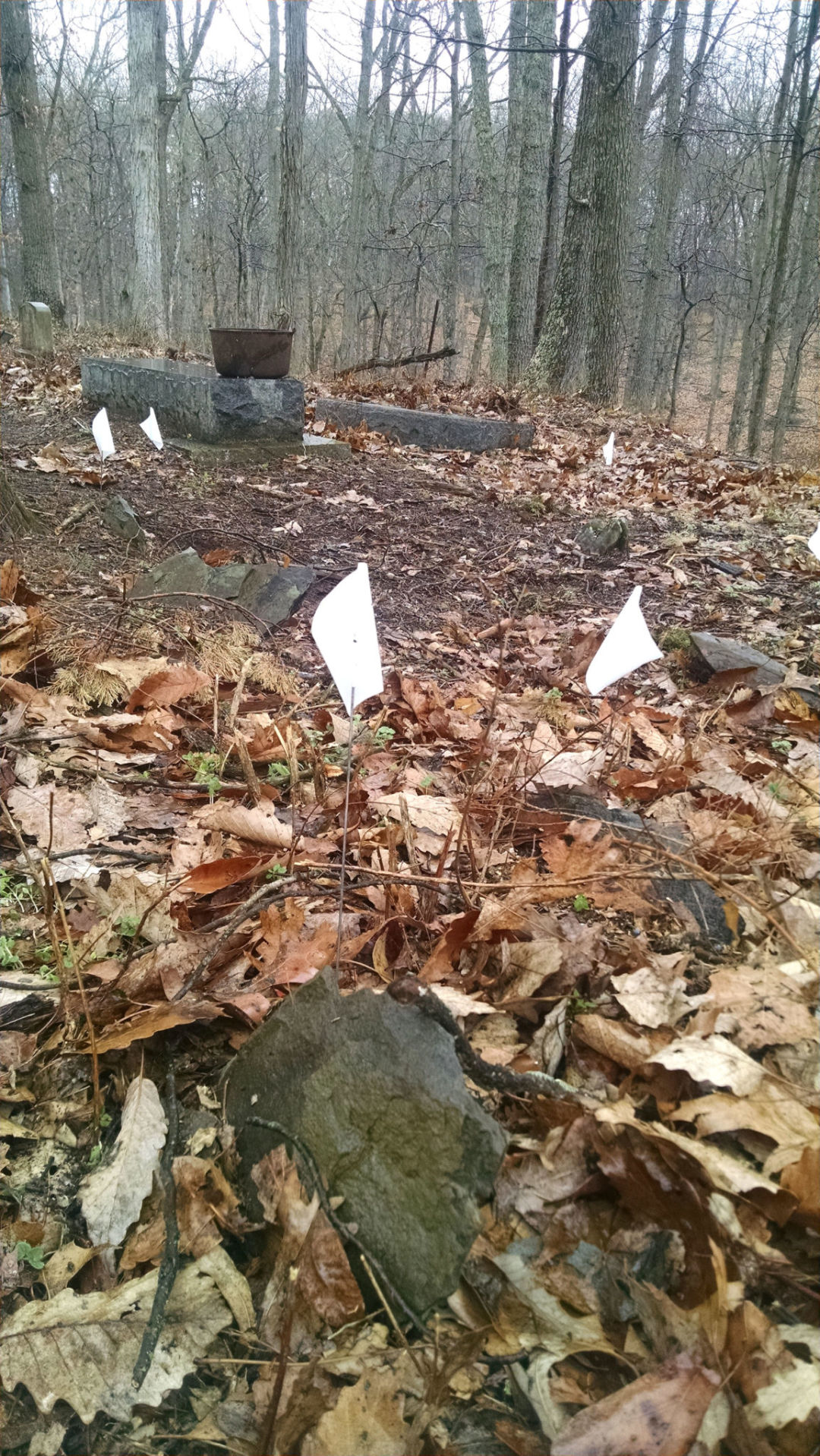 MIDDLETOWN – Shenandoah University students and volunteers located dozens of graves on Saturday as they surveyed a long-abandoned African-American cemetery.

They began about 12:30 p.m. and by 2 p.m. the 10 students and two volunteers had planted 100 small locator flags that Jonathan Noyalas, director of the McCormick Civil War Institute and history professor at Shenandoah University, had brought with him.

One of the students working in the softly falling rain was Supremia Bostick.

“I am here in the hopes I might uncover truths and hidden history,” she said.

Soon everyone would do that as they followed a muddy path among the trees to a pasture and through two gates to the Mount Zion Cemetery near North Buckton Road. It is here African-Americans are buried – many, but not all, were slaves.

In an area where battlefields are memorialized, preserved and the conflicts recreated, the same cannot be said of African-American cemeteries, of which there are several in the area, Noyalas said.

In one of the oldest parts of the Mount Zion Cemetery, a white headstone laying flat on the ground stood out.

It was intact but broken from its base, and it bore a name – that of Carolyn Jenkins.

Jenkins was a slave who was given her freedom after the Civil War. She would be one of the few to own property, Noyalas said. “She was doing her best to realize the promise of freedom.”

He pointed out that, as much change as she had experienced in her life, she almost lived long enough for one more historic moment. Women obtained the right to vote in 1919, 12 years after Jenkins died.

Next to her headstone was another, propped against a tree.

The writing on the soft stone was difficult to read. Noyalas and others had been unable to read it even a few days earlier. The rain that was falling, however, highlighted the words so that Faith Wright, Bostick.  and Chynna Beckett were able to decipher the name on the stone – Abraham Jenkins, Carolyn’s husband.

Working in two-man teams, they had spread out into five zones searching the once overgrown cemetery. They worked methodically to create a map of how many, and where, the dead were buried.

Finding the 100 sites they believe to be burial sites was no easy task. Students were looking for field stones sticking up from the ground. These nondescript, easily passed-over stones are grave markers for long-forgotten dead.

Most of the stones are blank with no names or epitaphs.

“That is one of the sad things,” Noyalas said. “If people, like we have here, are forgotten then it cheapens their life. That should never be the case.”

There could be up to a couple hundred final remains on the site. The actual number probably will never be known as Noyalas said remains of African-Americans were often buried on top of others.

The acre of land was donated in 1801 by Peter and Mary Senseney to the African Americans in the community for a church and a graveyard.

Noyalas said Peter Senseney, who charted Middletown, is not believed to have owned slaves – he was a Methodist and broke with the practice.

There are many more markers of burial sites to uncover and Noyalas said he and other teams would be back to continue the work.  In addition, members of the Middletown Heritage Society have been working on cleaning up the cemetery.

Town Mayor Charles Harbaugh was at the site Saturday to greet everyone.

“This is an amazing community event,” he said. “Shenandoah University is a partner of the community. They, along with Ellen Gant and Joan Roach, are instrumental in spotlighting the secret history of Middletown that not a lot of people know about.”

Roach and Gant are members of the Middletown Heritage Society and both were at the cemetery on Saturday.

Gant said her great-grandmother had moved to the area, coming by horse-drawn carriage from Louisiana, to work as a midwife for a Dr. Williams.

“I am from the old school. It is a sin to leave graves unattended,” Gant said looking over her great-grandmother’s grave.