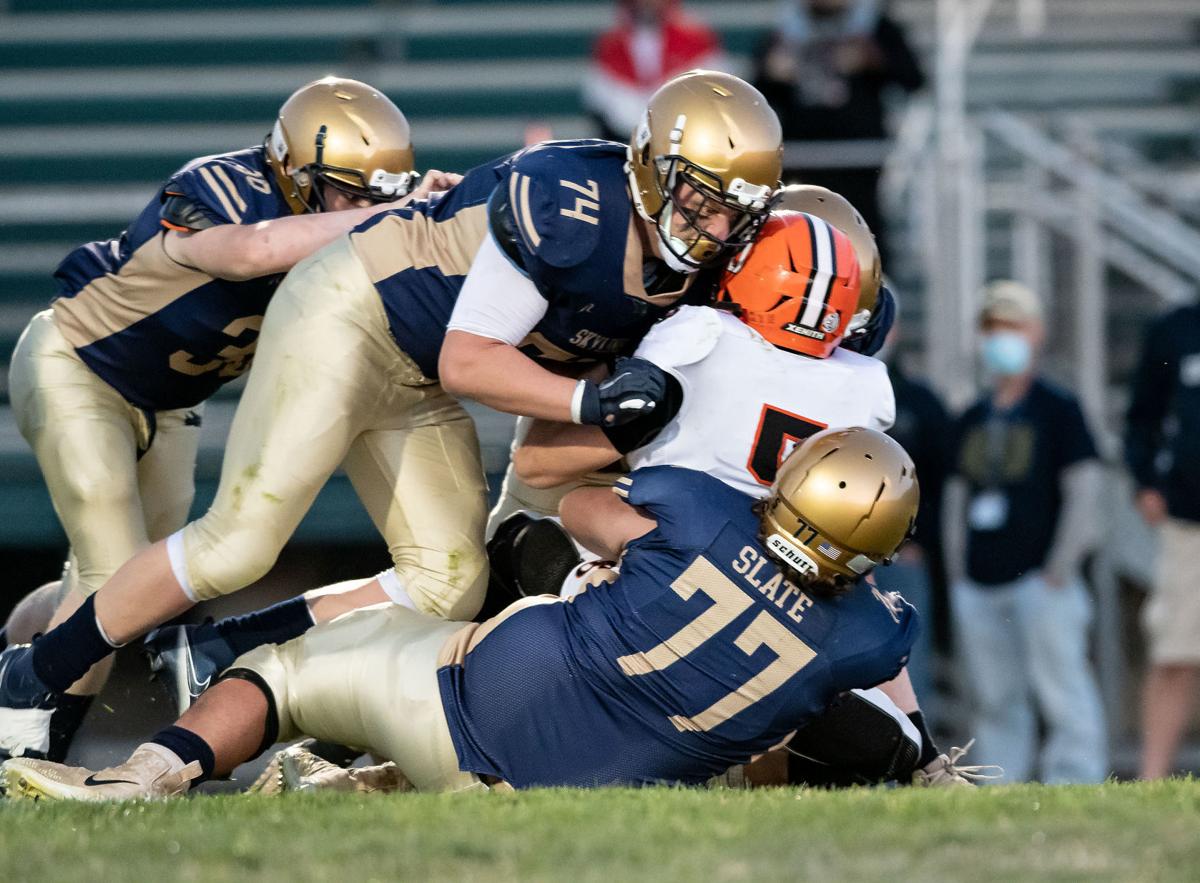 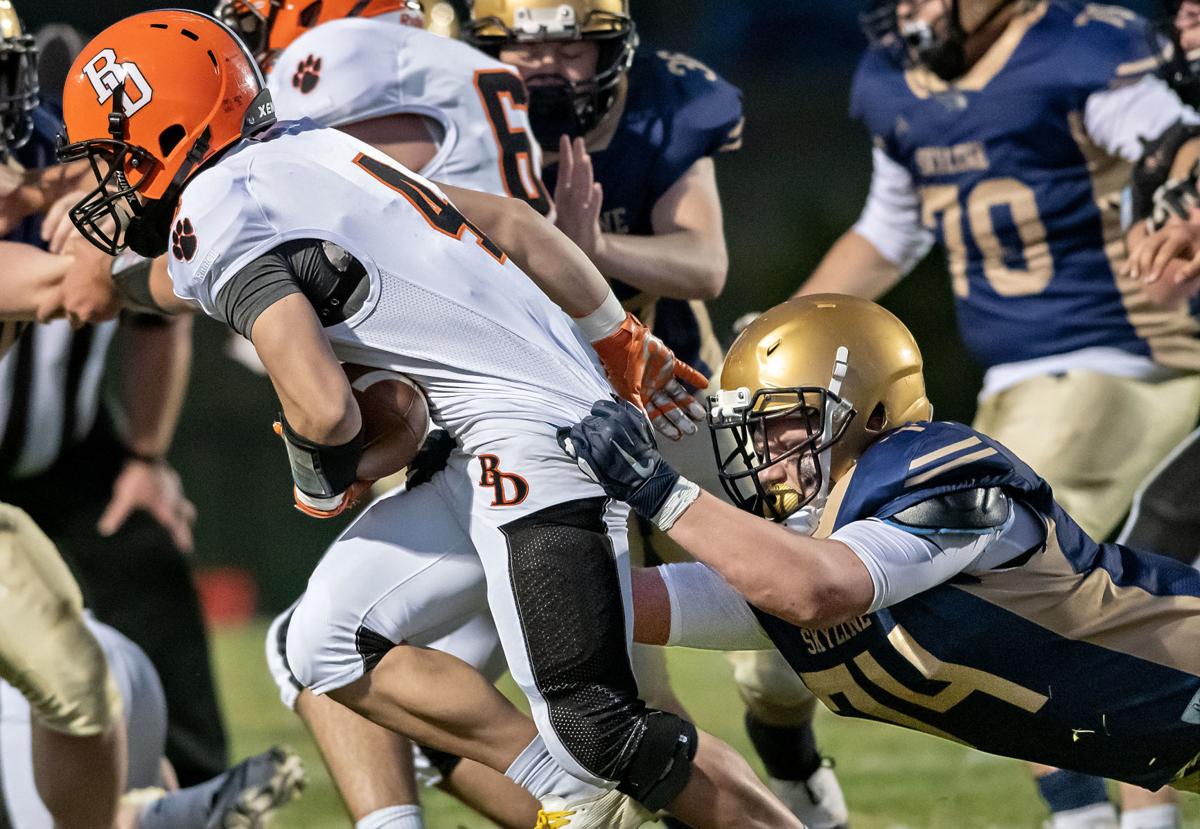 Skyline’s Will Wolf runs down Brentsville’s Brady Hoad from behind during their March 26 game in Front Royal.

Skyline’s Will Wolf runs down Brentsville’s Brady Hoad from behind during their March 26 game in Front Royal.

Will Wolf’s favorite memory of his school career was his first one.

The Skyline senior said getting ready to play in his first game was a memory that led to many more great memories.

“Right before the Central game, it was our first varsity game, I was a freshman and I was all sorts of nervous,” Wolf said. “And (Skyline head) coach (Heath) Gilbert came over into the locker room and told me I would be all right. That he wouldn’t put me in a situation where he knew I would fail, and he had all sorts of faith in me. And it snowballed from there. That was definitely probably one of the best memories.”

Wolf, The Northern Virginia Daily’s 2020-21 Defensive Football Player of the Year, made his senior year a special season with some impressive statistics and plays.

Before the season, which was pushed back to the spring due to the COVID-19 pandemic, started Wolf said he wasn’t sure what was going to happen, but he said he knew he had to keep working hard to prepare for his senior year.

“It was a time of uncertainty,” Wolf said. “I mean, not knowing what’s going to happen, if we’re going to play. But it’s also a time where true leaders come out. You can either choose to give up or you can keep fighting, and our team kept fighting. We kept working out, we never quit, and when the time came for the spring season we were ready to roll.”

Wolf has always been a strong leader, but this season he raised his leadership skills even higher.

Gilbert said the leadership Wolf showed this season was important to the team’s success.

“He took it to another level this year,” Gilbert said of Wolf’s leadership. “How he imposed his will, not in a negative way, but in a positive way to his teammates to make sure that we got everything we had out of practice to be prepared on Friday night. You have coaches giving that message, but when it comes from a player, it comes truly from his heart. And you see the same guy busting his butt doing extra to maybe make up for someone who can’t hang to show we’re going to get this done no matter what. It was outstanding.”

Wolf finished the season with an area-best 82 tackles and 7.5 sacks. Wolf was the Class 3 Northwestern District and Region 3B Defensive Player of the Year. He also was a key part of Skyline’s offensive line.

Wolf said he was pleased with how he played and the season the team had. He helped lead the Hawks (5-2) to the Class 3 Northwestern District title, and they advanced to the Region 3B semifinals for the second year in a row.

“I feel like it was a challenging year for everybody, but being able to come back and play at the level I played at my junior year and even higher it was awesome,” he said. “Just playing those seven games was definitely what we needed. I was just praying we got to play, and we finally got to play and I was ready to go when the time came. So that’s really what mattered.”

Wolf said his favorite game was beating William Monroe, in a game the team knew they needed to win to have a chance for the postseason. The Hawks trailed and rallied for the 29-26 victory.

On defense, Wolf made a lot of plays, including some impressive sacks. He said one sack in particular was memorable for him.

Wolf will be taking his talent to the U.S. Coast Guard Academy where he will play football this fall. He said the school, which is located in New London, Connecticut, is a perfect fit for him.

“I had a lot of interest from other schools, but ultimately it came down to my decision,” he said. “It wasn’t about football, it was about my life and what I wanted to do in my life. And ultimately Coast Guard set that up the best and that’s why I chose it.”

One of the things that has helped Wolf from the start of his career has been watching film. He said he watches about four hours of film each week of the season and it helps him perform even better out on the field.

“It helps me be a leader, especially when it comes to defensive practices and offensive practices,” Wolf said. “Being able to call what they’re going to do when there in a certain formation. It helps having a scouting report that coach Gilbert, (Skyline assistant) coach (Steve) Burton and the rest of the coaches give us at the start of the week. And then you’re able to go through the film and see exactly what they’re doing. It keeps you a step ahead of your opponent, and it gives you an edge on your opponent.”

Another big key to Wolf’s success has been his dedication to the weight room. The 6-foot-2, 250-pound Wolf said his body has changed a lot since he started lifting weights for football.

“I was a little 140-pound kid coming in 7th grade talking to coach Gilbert and now I’ve grew in the weight room,” Wolf said. “I put on weight, put on muscle and it definitely helped me as an athlete. It definitely helped me be a conditioned athlete, being in the trenches, being able to stand people up, being able to hold my ground. And in the end it also helped on the field becoming more smooth in my movements and becoming faster. So I was able to not be out ran by those running backs and the quarterbacks. I was able to catch them. So it helped.”

Gilbert said Wolf is special and it was pretty clear from the start he would have a big impact on the program.

“Right away,” Gilbert said of when he knew how special Wolf could be. “What he was able to do as a freshman, the way he was willing to work. Did I know that he would become a regional defensive player of the year? Or back-to-back district player of the year? No, but his mindset and work ethic and having the thought process that I’m the best at everything I do shined through.”

Gilbert said his favorite moment from Wolf from the season came against William Monroe, but there’s also been plenty of little moments that he will remember. He said Wolf will be missed this coming fall.

“He had a big sack at the end of the (William) Monroe game, that was so exciting,” Gilbert said of his top memories of Wolf. “On our finishing (offensive) drive, I didn’t know it at the time. But right on the goal line before we scored during that game he’s telling the defense that we’re going to run it right here and they can’t stop it. And that’s exactly what we did. And (Skyline fullback) Darion (Santucci) pounded it in behind him. It was a great bus ride on the way back. I remember that kind of stuff, the weight room sessions and working together in the summer time. He’s a special kid. He’s always going to have a special spot in my heart, and I look forward to following what he does as a man.”