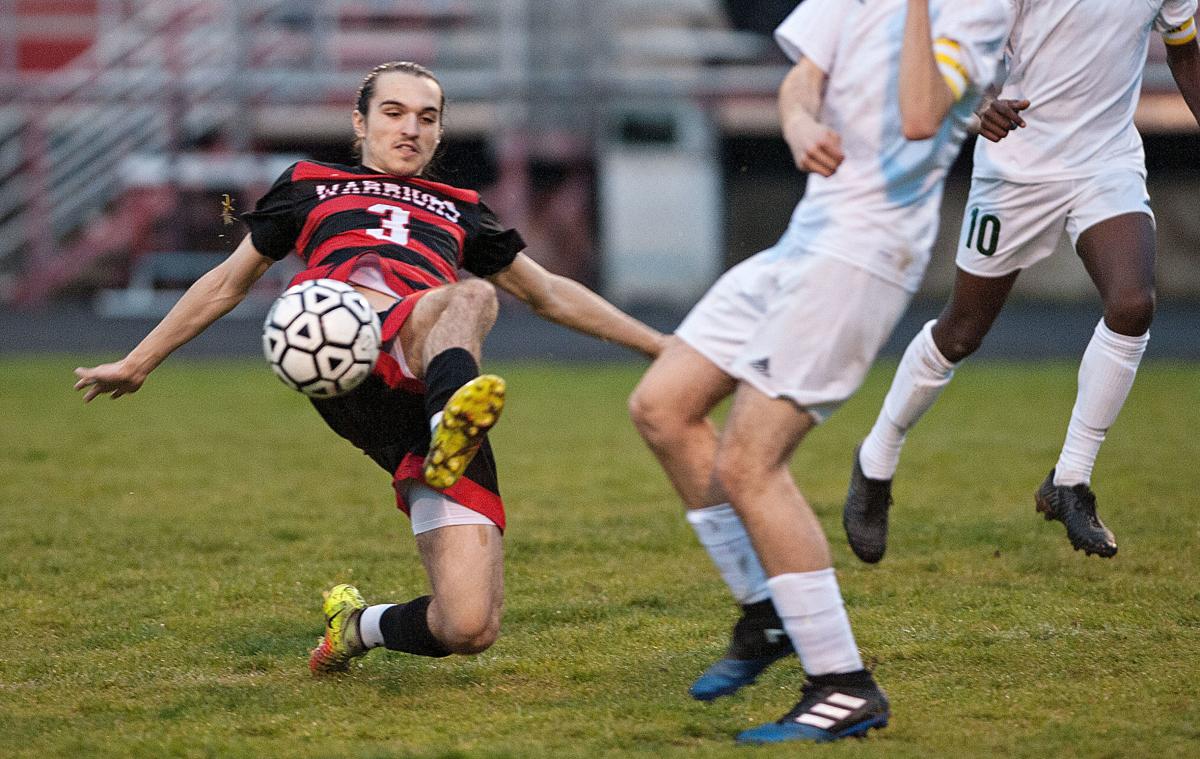 Sherando's Reed Solomon slips and hits the turf while trying to make a quick kick during soccer action last year. Solomon is one of nine Sherando seniors who made a big impact on the program. 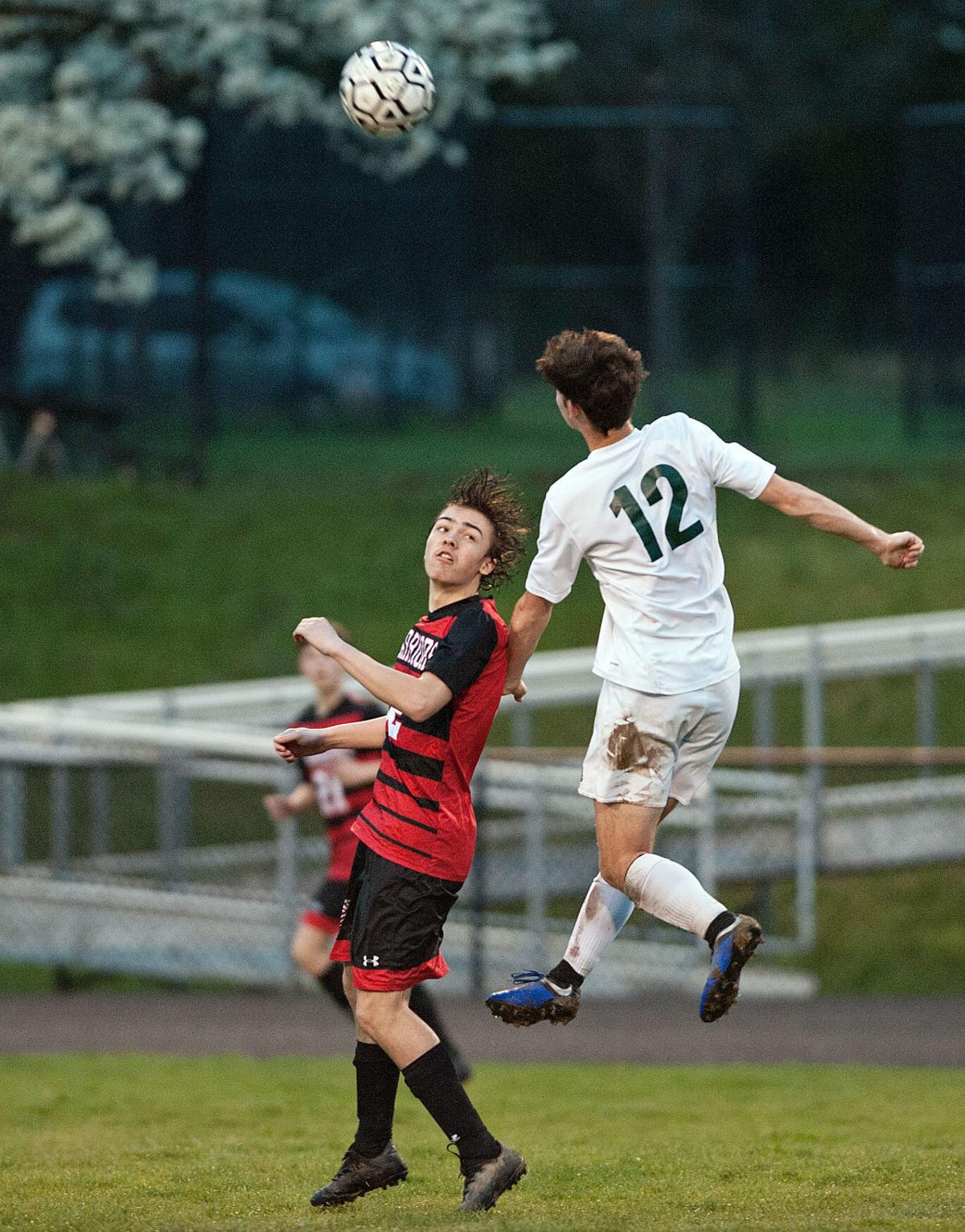 Skyline's Alexander O'Neill-Payne heads the ball over Sherando's David Berry during soccer action last year. Berry had one goal and one assist for Sherando last season and was one of nine seniors on this year's squad.

Sherando's Reed Solomon slips and hits the turf while trying to make a quick kick during soccer action last year. Solomon is one of nine Sherando seniors who made a big impact on the program.

Skyline's Alexander O'Neill-Payne heads the ball over Sherando's David Berry during soccer action last year. Berry had one goal and one assist for Sherando last season and was one of nine seniors on this year's squad.

The longtime Sherando coach said he couldn't have asked for a better group to coach.

"Overall just a dependable group of guys," Anderson said. "They're hard working. The majority of them I think everybody but Patrick (Almanza-Lora) this would be their fourth year (on varsity). Just overall, a great group of kids. They all excel in the classroom. ...They've always been there for the four years. As far as a good group of kids you can't ask for a better one than that."

"By far my greatest memory came from my junior year – winning the regular season (Class 4 Northwestern District title)," Wagner said. "Just watching the clock go down and I just remember I instantly ran back to our keeper Spencer Scott and we were all just yelling. We did a dogpile. It's just one of those moments they make in the movies, and it's just so surreal. That was by far my greatest experience in soccer."

For Anderson, one of his memories of Wagner came quite some time ago. Wagner is the fourth of his siblings to play soccer at Sherando for Anderson. When Wagner was in elementary school he was a team manager and the ball boy for his brother's (Josh) games.

Anderson said the team was not doing well in a game against Tuscarora and at halftime, Joe Wagner decided he should give the team a speech.

"He was like 'coach, I got this,'" Anderson said with a laugh. "The next thing I know he comes in and gives this hellfire and brimstone speech at halftime. And the next thing you know, the kids pull it out and win the game. So I'm like who is this kid? And come to the light of it, it was one of the Wagner boys."

Joe Wagner said he didn't remember what he said to the team but it worked.

"I was obviously really young," he said. "I don't remember a lot about the speech, but I just remember I've seen a bunch of grown men cry and I've never seen it happen like that before. Apparently, as a kid, I knew the right things to say and they were pumped up. They were ready to go. I didn't even know what it meant to them. It was something special to watch my brother and his team because they had a great team back then. It was just a special moment for me to be a part of my brother's team."

Joe Wagner said it's been special for him to have been able to watch his older brothers, Zach, Josh and Nathan play at Sherando and then be able to follow in their footsteps.

"It's been completely like a deja vu moment," Joe Wagner said. "Just experiencing over 10 years of Sherando soccer and just watching them. Coming from that team manager to trying to become a leader for my team this year. It's just been a great experience. It just kind of amplifies how great of a soccer program Sherando has that people want to keep coming back and fulfill that Sherando soccer mentality."

Berry said that most of his favorite memories at Sherando come from the team bonding.

"Some of my biggest memories are the team meals that we have before every game," Berry said. "They're always a blast. It's a great team bonding time."

Berry said that his favorite part about soccer is the competitiveness that it brings out.

"I like the competitive aspect," he said. "Every day you show up to compete. You got to earn your spot. It's a great way to express my competitiveness, which I'm very competitive."

Berry and Joe Wagner each had one goal and one assist last year for the Warriors.

Anderson said that both Lothrop and Naylor were battling this season for the goalkeeper spot, vacated by 2019 Sherando graduate Spencer Scott, and both showed a lot of improvement. Naylor had been the backup to Scott for the last few years. Scott was a standout goalkeeper for the Warriors and last year had 142 saves and five shutouts.

"Connor and Christian, those guys we're battling for goalkeeper to replace Spencer this year and they were both seniors," Anderson said. "Connor's kind of played all over for us at his time at Sherando. But it's just nice to see those two kids battle it out, especially Christian because he knew it was going to be tough to beat out Spencer (in previous years) until he graduated. Then Spencer graduated and this year would have been his year to have his chance. Him and Connor were really getting after it in a good way to help replace Spencer. So you just hate to see (the season be canceled by the COVID-19 pandemic) from that standpoint."

Berry said he plans to attend Penn State in the fall and hopes to either walk on to the college team or play on the club team.

He said it's nice to know that his soccer career doesn't have to come to an end just yet.

"It's great," Berry said. "It's something that I love, and I'm glad my final road isn't ending on something like (the COVID-19 pandemic canceling the spring season). So I'm looking forward to starting fresh and learning and making new friendships and new memories there."

Joe Wagner said that he plans to attend Virginia Tech this fall and will play intramural soccer with his older brother Nathan.

Joe Wagner said that soccer has taught him many things that he will take with him in life.

"The sport of soccer kind of developed who I am," Joe Wagner said. "It gave me communication skills, leadership skills, taught me how to be a team member. I always felt that there's no better way to learn who you are than by playing a sport. I feel like soccer's just done that from when I started when I was five. I've learned and developed so much not just with my fundamentals but as a person. And I believe that's what coach Anderson does incredibly well. At the end of the day, he always makes sure he teaches us how to become young men, and I think that's why Anderson's a great coach. And soccer has just meant everything to me."