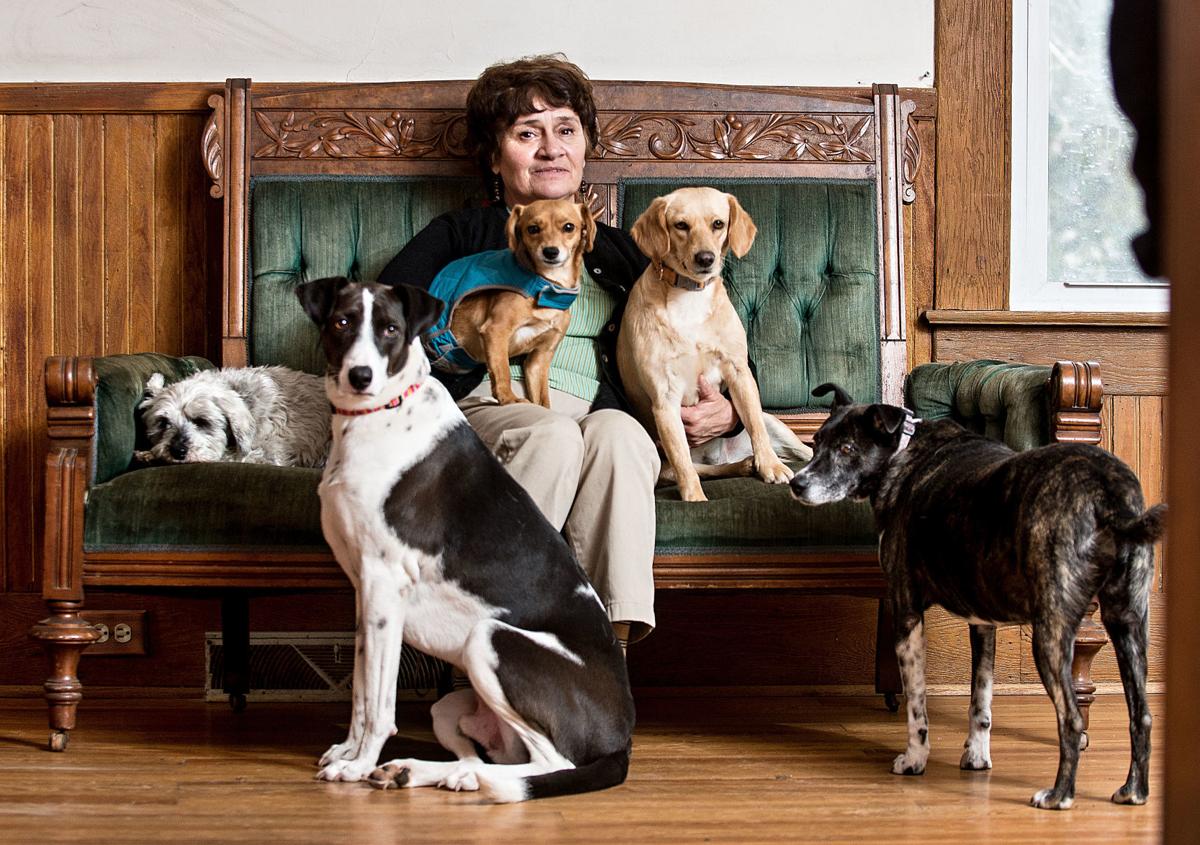 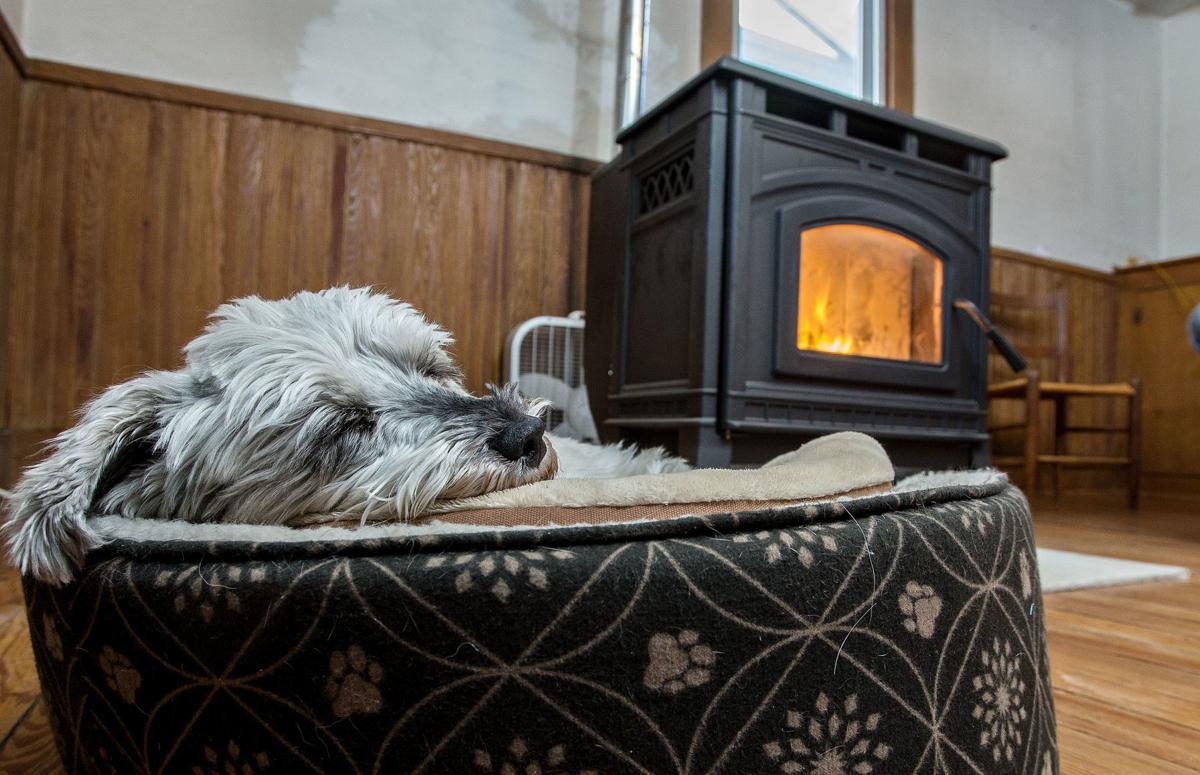 Shula, a mixed schnauzer, snoozes beside the pellet stove inside her Edinburg home.

Shula, a mixed schnauzer, snoozes beside the pellet stove inside her Edinburg home.

EDINBURG – Dogs are often known as man’s best friend, but Cecilla Rocha of Edinburg feels her five dogs - Shula, Loro, Jachi, Huitzi, and Murci - are much more than her friends.

“I don’t consider my dogs my children as many people say,” she said. “They’re not my children, they’re my partners. I do consider them my immediate family because they are the family I come to every day.”

Originally from Mexico City, Rocha, 60, moved to the Shenandoah Valley in 1986 and lived in the area for 21 years. She became an American citizen in 1989.

Rocha worked for the Shenandoah County school division as an English as a second language (ESL) instructor from 1988 to 1992.

"Back then, there were only two students who were from Mexico," she said. "When I left the program, there were 86 students."

Rocha returned to Mexico in 2008 to take care of her parents in the Mexican state of Morelos, 2 1/2 hours southwest of Mexico City, and stayed there for 11 years.

During her time in Mexico, Rocha began to take notice of the conditions the animals in the area were living in.

“Ever since I was a kid, I have had a very close relationship with animals, dogs especially,” she said. “In Mexico, economic situations are difficult and there’s a lot of animal mistreatment.”

Rocha and her father started an animal rescue and protection group called Lula’s Rescue Group, named after her father’s dog. The group rescued animals ranging from dogs to iguanas.

“My dad and I weren’t planning a rescue group but that’s what it became,” she said. “We organized neutering and spaying campaigns. [My dad and I] did some work in the schools to help kids, and people in general, to become more aware and sensitive about the feelings of animals and the right they have to share this Earth with us.”

One of the dogs that was rescued, Shula, had been hit by a car before Rocha found her.

Rocha said that Shula also had burn marks and a knife cut on her side. She said the dogs who live with her all come from similar living situations.

“It’s so difficult to see that and not do anything about it, you know,” she said.

Rocha said sought help from a local veterinarian to nurse the dogs back to health.

“She was wonderful,” she said. “She always gave me breaks with the vet bills. I learned a lot.”

Rocha said that she worked to secure medical supplies for the dogs as well.

“In Mexico, you have the possibility of ordering a lot of the vet medicines,” she said. “You can do a lot of [treatment of dogs] yourself.”

Rocha decided in August she wanted to return to the Shenandoah Valley, but it was a situation that was much easier said than done due to her owning five rescue dogs.

“I was very fortunate because I was wondering how I was going to get five dogs back to the U.S.,” she said. “I realized I wasn’t going to be able to do this by myself.”

Rocha contacted friends she still had in the Shenandoah Valley area to help her move in a week. She said that she had to purchase kennels for the dogs, get them to the veterinarian for their shots, and secure passage back to the United States.

“It was a real adventure,” Rocha said. “For the dogs, it was a nightmare.”

She said that the airport in Mexico City wouldn’t allow her and the dogs on a flight to Dallas because by the time the flight arrived in Dallas it would be too hot.

“They put us on a later flight and we had to stay at the airport in Mexico City for seven hours,” Rocha said. “The dogs could not get out of the kennels. I took the dogs out one at a time to walk outside of the airport.”

Rocha’s luck didn’t get much better in Dallas as the airport wouldn’t allow her to take a 7 a.m. flight out of Dallas due to time constraints on getting the dogs checked in.

“It was five and a half hours before the next flight,” she said. “We were supposed to fly from Dallas to Washington. It was a more convenient flight. By then, the dogs started to cry. I was heartbroken. I was thinking, when is this going to end?”

When Rocha and her dogs finally made it to Virginia, she was relived. She said the dogs had been in their kennels for 17 hours by the time their journey to Virginia was over.

“There was a rest stop near Manassas that we stopped at and we let the dogs out,” she said. “It was so beautiful to see them getting out of the kennels.”

Rocha and her dogs moved to Edinburg in November. She said the dogs are still adjusting to their new environment after spending most of their lives in a desert climate.

“Here, they have a huge yard to play in, but it’s cold and they don’t want to play in the yard,” Rocha said. “Between being cold and getting dark early, they sleep a lot.”

Another issue the dogs have faced has been the lack of free space they have to run and play in. Rocha said that the dogs were used to having more open space in Mexico.

“In Mexico, it was much easier to get them all on the back of my truck and drive to the end of the street and they would just get out of the truck and they were just free,” she said. “Now,  it’s harder on them.”

Rocha recalled the dogs seeing snow for the first time.

“Loro, the big dog, just loved it,” she said. “He walked out and he looked at it and trying to figure out what it is. I saw him step down the porch and he started stepping on the snow and he was feeling it. All of a sudden, he just started running all over the yard. He was so happy. The other dogs liked it, but not as much as Loro.”

Since moving to Edinburg, Rocha achieved duel citizenship in both the United States and Mexico and she is looking for work in the area.