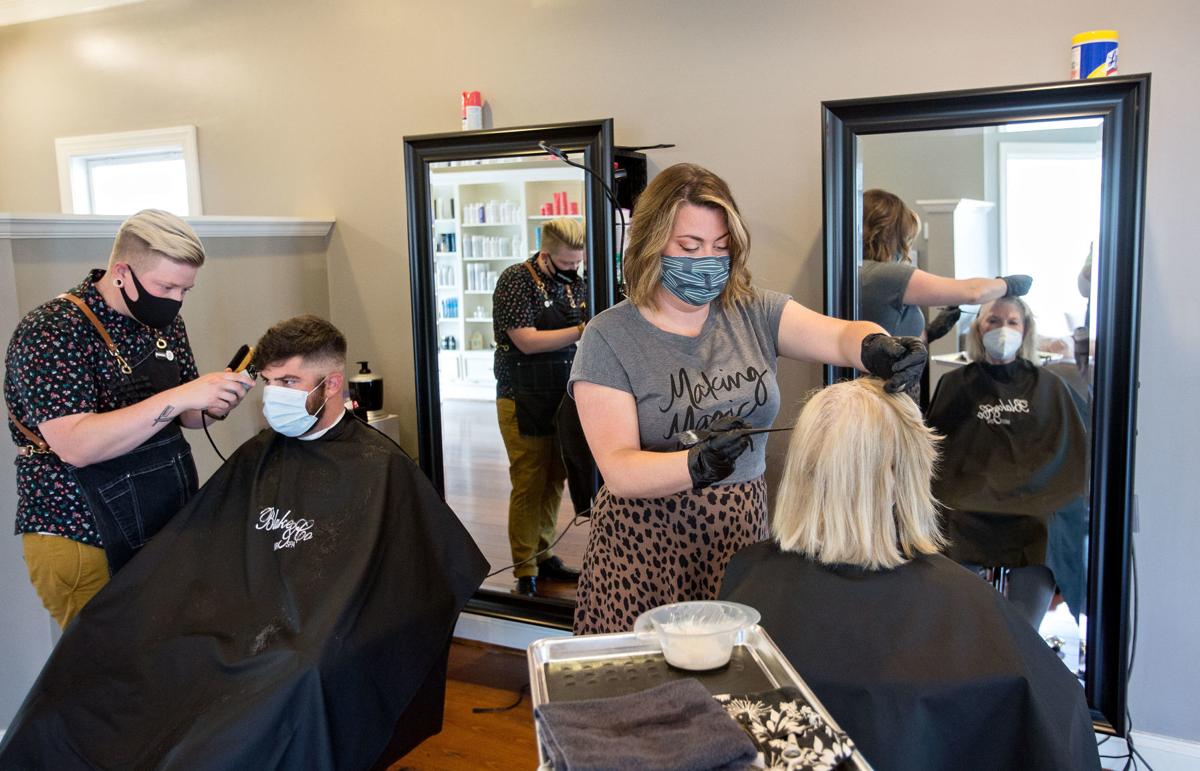 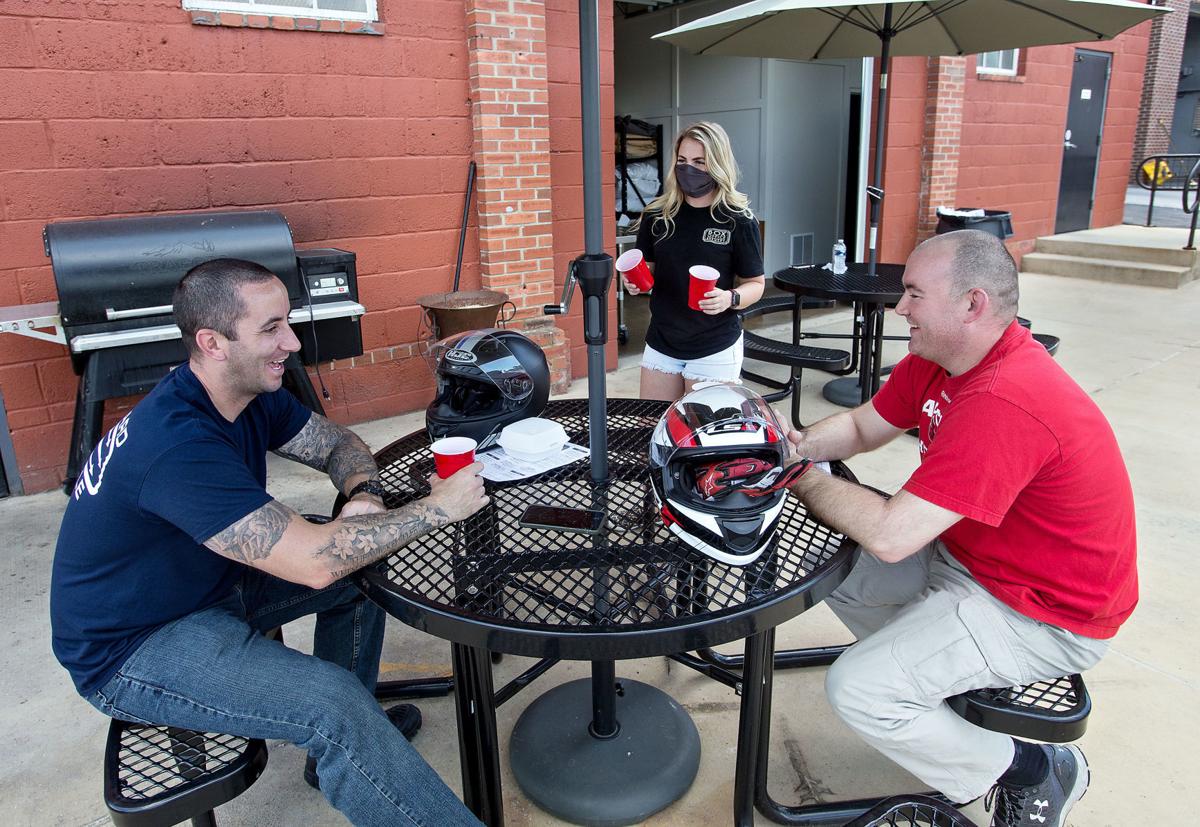 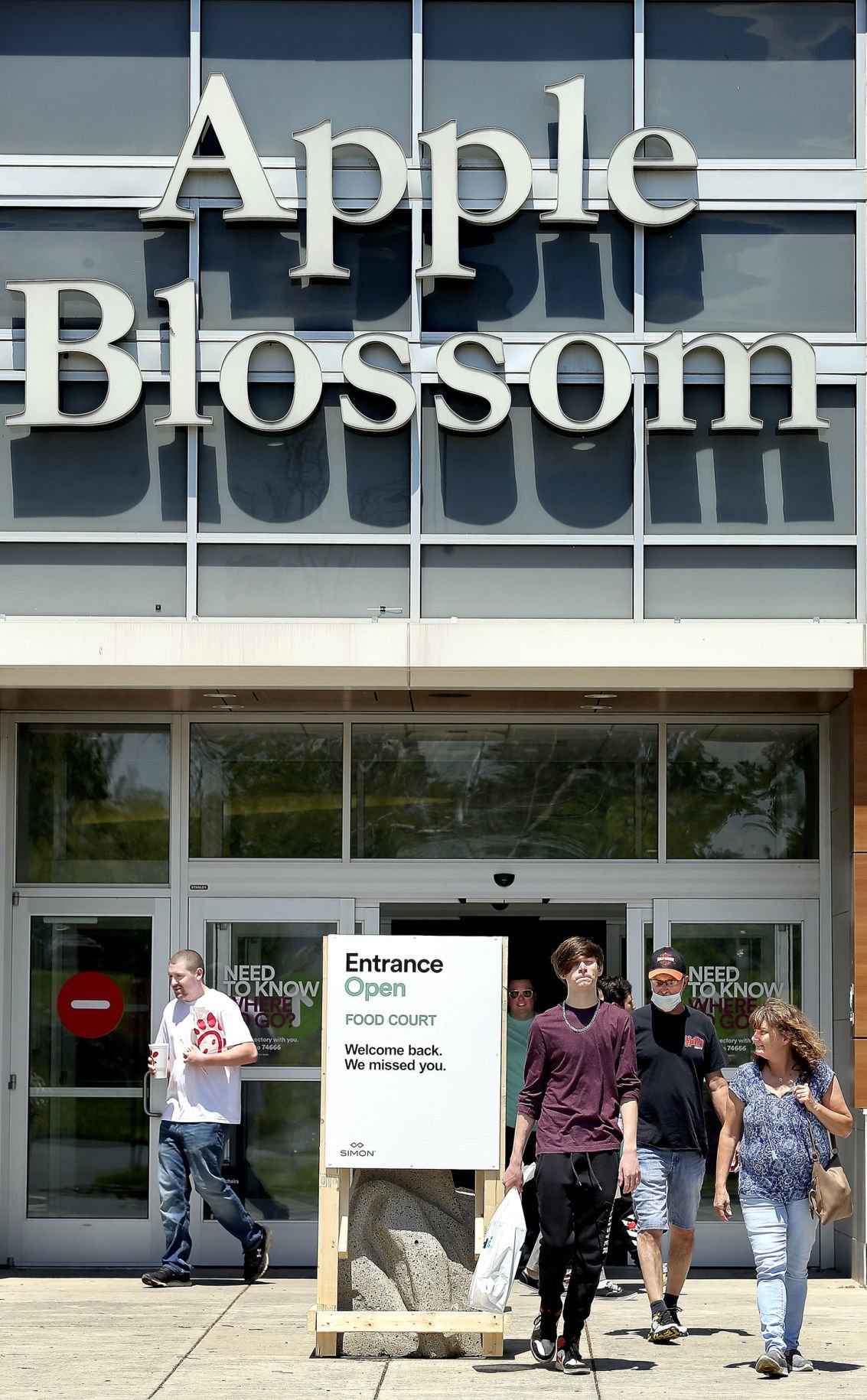 Accompanied by his grandparents, Ronnie and Tina Tarkett, at right, Joshua Tarkett, 16, of Toms Brook, leaves Winchester's Apple Blossom Mall with a new pair of shoes Friday. The mall reopened Friday after being closed due to the coronavirus pandemic. 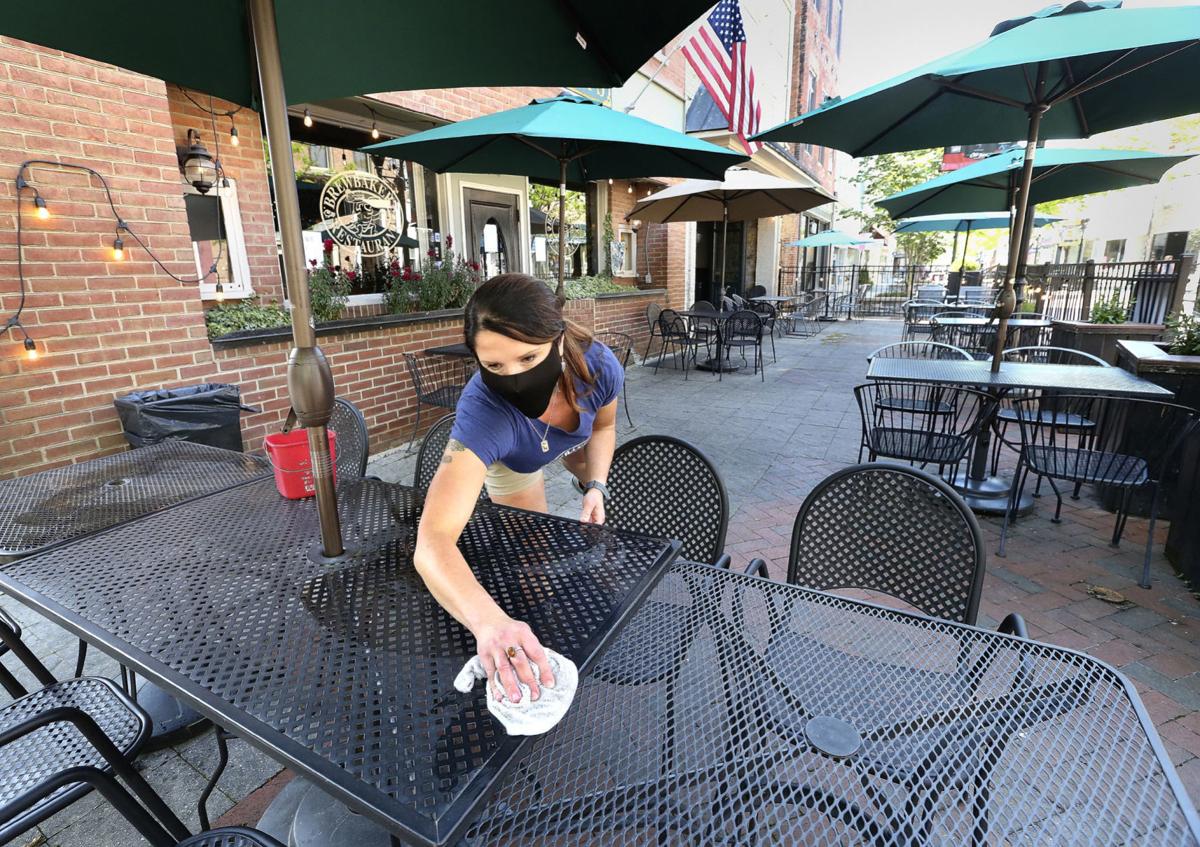 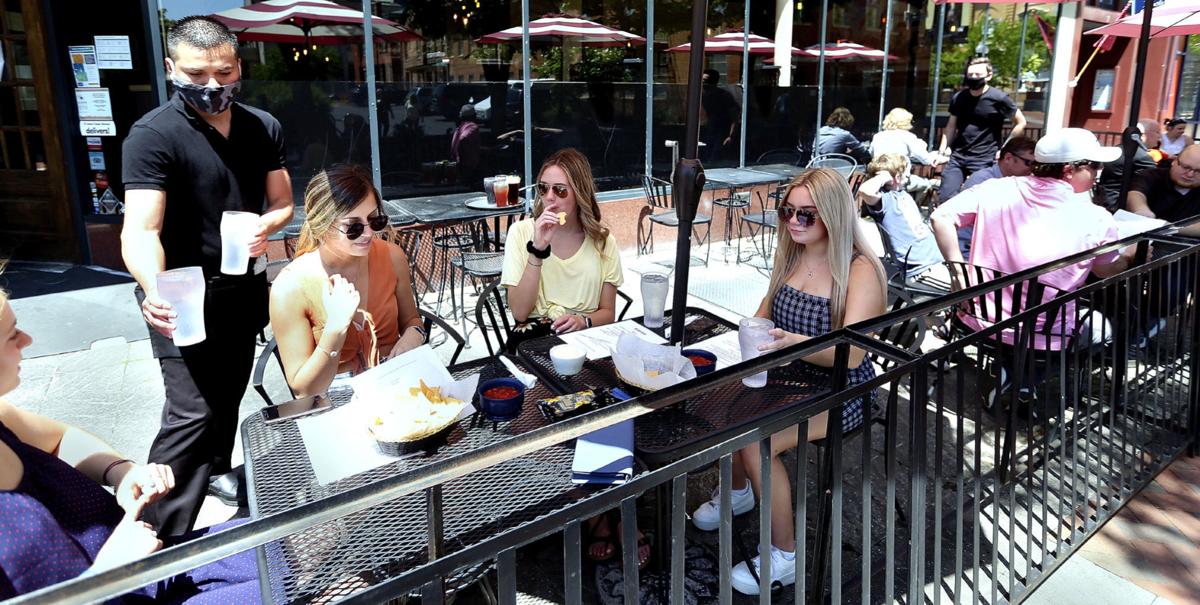 Friends, from left, Sarah Purdy, Tori Johnson, Maggie Heishman and Madi Clark, all 18 and of Winchester, enjoy dining outside during lunch at El Centro Classic Mexican Food & Drink on the Loudoun Street Mall on Friday.

Accompanied by his grandparents, Ronnie and Tina Tarkett, at right, Joshua Tarkett, 16, of Toms Brook, leaves Winchester's Apple Blossom Mall with a new pair of shoes Friday. The mall reopened Friday after being closed due to the coronavirus pandemic.

Friends, from left, Sarah Purdy, Tori Johnson, Maggie Heishman and Madi Clark, all 18 and of Winchester, enjoy dining outside during lunch at El Centro Classic Mexican Food & Drink on the Loudoun Street Mall on Friday.

Even though you couldn’t see it, Blake Pierpoint was smiling under her mask all day while she was cutting hair Friday.

Pierpoint, who owns Blake and Co. Hair Spa at 1201 N. Shenandoah Ave. in Front Royal, said having clients sit in her chair and catch up about the last two months of life was among the highlights of her 2020 so far.

She said she’s glad a sense of normalcy has returned to her and others in the Northern Shenandoah Valley as businesses began to open back up under Gov. Ralph Northam’s Phase One plan.

“Oh my gosh, I’ve missed it so much,” she said. “We only have a certain amount of time with our clients, but we haven't seen them in two months, so we all tried to catch up. I think everyone’s been in such a good mood today because we finally get to see each other. Today has been all of our older clients that have been with us for years.”

And it made for a busy but happy Friday.

“We’ve been really steady and our clients have been really awesome about wearing their masks. No complaints so far,”she said. “I think we were all really nervous about backlash about everyone having to wear masks, but they’ve been really appreciative of us. It feels like they’re seeing us in a different light since they haven't seen us in so long.”

Travis Eagan, who owns Eagan & Company Barber Shop at 219 Weems Lane in Winchester, agreed and said he was happy with the business and how well his crew adapted.

Those adaptations included things like “getting behind the ears” with a mask on.

“We are having the customer hold the mask in place while we go around their ears,” Eagan said. “Additionally, we have suspended straight shaves and beard trims per the governor’s order and have implemented an appointment system. All staff are wearing masks as well as a customers. As per normal, we are disinfecting all tools, chairs, and surfaces between each customer. Our customers are waiting in their car until we call them for their appointment. Children under 12 are accompanied by one adult and the adult has to remain in a waiting chair by the front door. We have set up chairs outside for customers to wait in if they choose. Our barber chairs were already 6 feet apart, so we didn’t have to move them.”

It wasn’t just barber shops and hair salons that were finding smiling faces on Friday, though. Those who have been itching for a sit-down restaurant meal or cold beverage were finally allowed to do just that.

Business was “steady and orderly” throughout the day at Box Office Brewery in Strasburg, co-owner Tom Price said Friday evening.

The brewery is offering five outdoor tables that seats about eight people per table, following the guidelines set forth.

“Of course, we did all of the social distancing with our tables that are more than 6 feet apart,” Price said. “All our staff is wearing face masks and gloves, and as patrons leave we’re sanitizing all the tables. We’ve also got plexiglass between the bartender and the cash registers.”

Box Office Brewery is also using throwaway menus as well as serving its food in styrofoam containers and its beer in solo cups so customers take care of throwing away their own trash. There are also sanitizer stations for patrons to use, Price noted.

He said customers have been enjoying the option of grabbing a bite to eat or a cold beer outside.

“Everybody’s been happy,” he said. “I think everybody wants to get out. We’ll do our job of keeping people apart. Our fear was that it was going to be overcrowded, but it hasn't been.”

Some folks may be worried about visiting bars around the area since the atmosphere in such establishments is typically known for being prone to rowdiness or customers finding themselves being closer to one another in general. But Price said with limitations on the number of guests allowed on the outdoor patios, staffs should have no problem managing things while making sure guidelines are followed.

“We’re limiting seating, so you can’t just come in here and stand,” he said. “That’s going to cut down on any problem areas where people usually stand beside each other. We’re not going to have hundreds of people. We’ll have, at max, around 30 people.”

One group of friends in Winchester was among those taking advantage of the nice weather for a late-morning beverage.

“This was kind of our thing for awhile before the virus, where we’d meet up after working night shift and grab a beer. So, we said let’s have a beer and see if we can’t normalize in some of this stuff that’s going on,” Philip Swanson said. “We’re being smart, of course.”

Most of the group explained they were essential personnel and had been working throughout the pandemic, so they said they appreciated the opportunity to step back away from things for a bit.

“It’s nice to have a place to get off work and have a beer,” Lucky Orndorff said.

Places like the Loudoun Street Pedestrian Mall weren’t as busy as a normal 80-degree spring day, but folks around the region seemed to generally have no issues coming out as the state begins its reopening.

In the first phase of the governor’s plan, restaurants, beverage services, farmers markets, brick and mortar retail shops, fitness and exercise facilities, personal care and grooming services, campgrounds and summer camps, and religious services were given guidelines on catering to needs on a limited basis.

All businesses reopening were given guidelines for physical distancing, enhanced cleaning and disinfection and enhanced workplace safety practices, which can be found at www.virginia.gov/coronavirus/forwardvirginia.

Businesses like restaurants and bars were encouraged to continue take-out and delivery options with the option to open outdoor seating. With that, the businesses are to post signage at the entrance of the establishment prohibiting those with a fever or symptoms of COVID-19 or known exposure to COVID-19 within the last 14. Signage is also needed to promote social distancing and to remind patrons of rules about gatherings and options for high risk individuals. Those who are sick are still encouraged to stay home.

Outdoor seating occupancy is limited to no more than 50% of the lowest occupancy load allowed at the establishment and a minimum of 6 feet is to be kept between individuals as much as possible, including parties at tables. No more than 10 patrons are supposed to be seated at the same table, even if multiple tables are pushed together unless marked with 6-foot divisions. Bar seating is supposed to be off limits for seating options.

Prior to the patrons showing up for lunch Friday in Winchester, Brewbakers owner Laura Vaughn and her staff were busy making final swoops to re-sanitize and make sure the seating options were up to par on the pedestrian mall.

“We’ve been revamping safety and sanitation protocols and looking at how the restaurant itself is set up. We’ve been seeing what things we have to do to deter our guests from doing their same old habits,” she said.

Brewbakers closed down in the middle of March and just recently reopened a little over a week ago. Now, going from just pick-up options to seating guests again, it almost feels like opening a new restaurant, Vaughn said.

“It’s a whole new situation in a new environment,” she said, “so it’s exciting but also nerve-wracking.”

PaveMint Smokin’ Taphouse in Front Royal knows that feeling as the owners and staff changed up their outdoor look for customers to take advantage of at least the foreseeable future.

The restaurant, located at 9 S. Commerce Ave.  in Front Royal, was left with about five tables after dwindling down to meet the 50% occupancy guideline, so owner Rachel Failmezger and her staff decided to reopen with a summer camp theme, using 100-square-foot, rain- and weather-resistant tents to serve as “cabins.”

“We started thinking about it probably four weeks ago: if we do open, how do we keep people socially distant and not having to tell people to go back to their tables, and how can we keep it fun and almost like a group activity?” Failmezger said.

Patrons can reserve a “cabin” for 2 1/2 hours, then a half hour of cleaning will be done prior to the next group coming in. Customers can book online, where a $50 deposit that will go toward purchases is required.

The staff at PaveMint will be themed as camp counselors, too, hopefully making things more enjoyable as customers get back out into the world, Failmezger said.

Whether it was catching up with friends or supporting a local business or just wanting some fresh air, those folks who were out seemed to have very little reservations about COVID-19. Some wore masks, others didn’t, unless they were required to. Some shopped alone, others traveled in small groups together.

One group of four high school ladies were waiting outside of El Centro Mexican Restaurant on the pedestrian mall until the staff opened up.

It was prom weekend for Maggie Heishman, a James Wood High student, and she and her friends had missed each other and missed their favorite food spot.

“We decided to get dressed up, take pictures and come out,” she said. “We’ve just been waiting for it to open. Supporting small businesses is big for me, so we thought it’d be cool.”

“We used to go like every two weeks,” her friend and Millbrook High student Mandi Clark said, “and since they didn’t offer take-out, we haven’t had it almost two months.”

Others took the opportunity to do some late morning shopping and get back home before the lunch and dinner crowds hit.

“I knew there would be a lot of people out and about,” said Stephens City resident Melissa Tusing, who was perusing Polka Dot Pot on the walking mall with her daughter Natalee. “So we wanted to get some things to do at home away from that.”