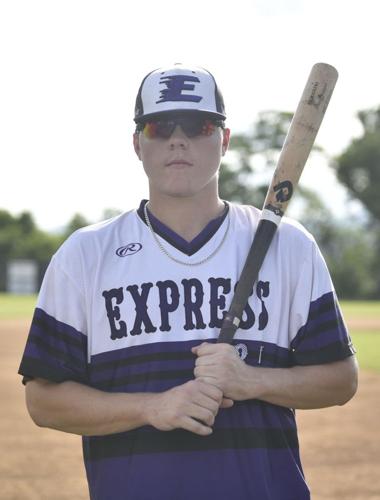 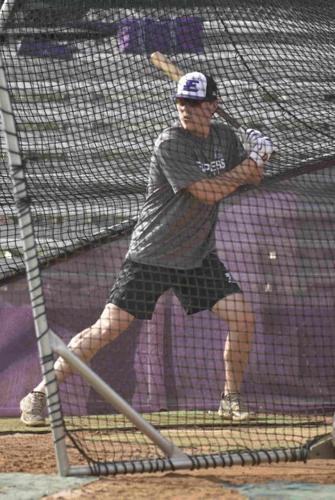 Strasburg’s Garrett McMillan takes some swings during batting practice on Tuesday before a game against Front Royal.

Strasburg’s Garrett McMillan takes some swings during batting practice on Tuesday before a game against Front Royal.

STRASBURG — When Garrett McMillan arrived to the Shenandoah Valley to play with the Strasburg Express this summer, he hadn’t seen live pitching in more than six months.

McMillan spent the spring as Alabama’s Friday night starter, toeing the rubber for the Crimson Tide in the team’s weekend series openers. He led the SEC in innings pitched (86) this past spring, striking out 83 with a 4.29 ERA.

Now, the Crimson Tide’s right-handed ace traded his pitcher’s glove for a pair of batting gloves and a helmet, stepping up to the plate with the Strasburg Express, looking to gain more reps with live pitching.

Although he didn’t hit with the Crimson Tide this season, the Tuscaloosa, Ala., native isn’t a stranger to hitting.

In two seasons at Shelton State Community College, McMillan was a career .429 hitter with three home runs and 23 RBIs. During his senior season at Hillcrest High School, he hit .444 with four home runs, propelling the team to the state semifinals.

“I’ve done a lot my whole life, so it’s kind of like you don’t really forget how to do it. It’s just getting your timing back down,” McMillan said. “You don’t really lose your swing.”

McMillan hit during the Crimson Tide’s fall practices, but transitioned to a pitcher-only role for the regular-season campaign. He’s in the Valley Baseball League to gain experience at the plate with hopes of hitting next spring in addition to pitching.

This summer, McMillan has been working on his timing and he’s recorded a hit in six of the 10 games he’s appeared in so far, en route to batting .280 with three doubles, six RBIs and seven walks.

For Express infielder Walt Bailey, seeing McMillan in the batter’s box is nothing new. The two attended the same high school and junior college together and Bailey said they’re “best buds.”

“I’ve been watching him hit his whole life, it’s like riding a bike for him,” Bailey said. “He’s been crushing ever since he was little, so I didn’t expect anything different.”

McMillan has one multi-hit game this summer when he went 2-for-5 against the Purcellville Cannons on June 11, clubbing a single and a double.

Express head coach George Laase said most hitters play in the summer to build on their game and gain experience in the batter’s box and McMillan is no different.

“When you get a player with his IQ and he has natural raw power, it’s just a matter of getting him back on track,” Laase said. “We knew it was going to be a little bit of an adjustment, but we could see the raw talent. The potential is there for a two-way career, but it’s just a matter of him catching up and getting back on time.”

McMillan said he’s not focused on working on a particular part of hitting, just seeing the ball and getting solid contact each time he swings.

The Crimson Tide ace is used to making it hard for opposing batters to barrel up a ball, but he admitted that he forgot how difficult hitting can be.

“Hitting is definitely harder than I remembered it to be,” McMillan said. “I like the struggle of hitting. I like trying to get better at it and always trying to be effective.”

Being a pitcher in the SEC, McMillan said he’s used his experiences on the mound when he stands in the batter’s box, knowing what it feels like to be in the pitcher’s shoes in the moment.

McMillan grew up dreaming of playing at Alabama, a goal that he checked off this spring as the team’s starting pitcher, but now he’s working toward becoming an offensive threat for the Crimson Tide.

The tall left-handed batter has his sights set on the batting order if that means he can help his team win in the competitive SEC baseball conference and hitting with the Express is a step in that direction.