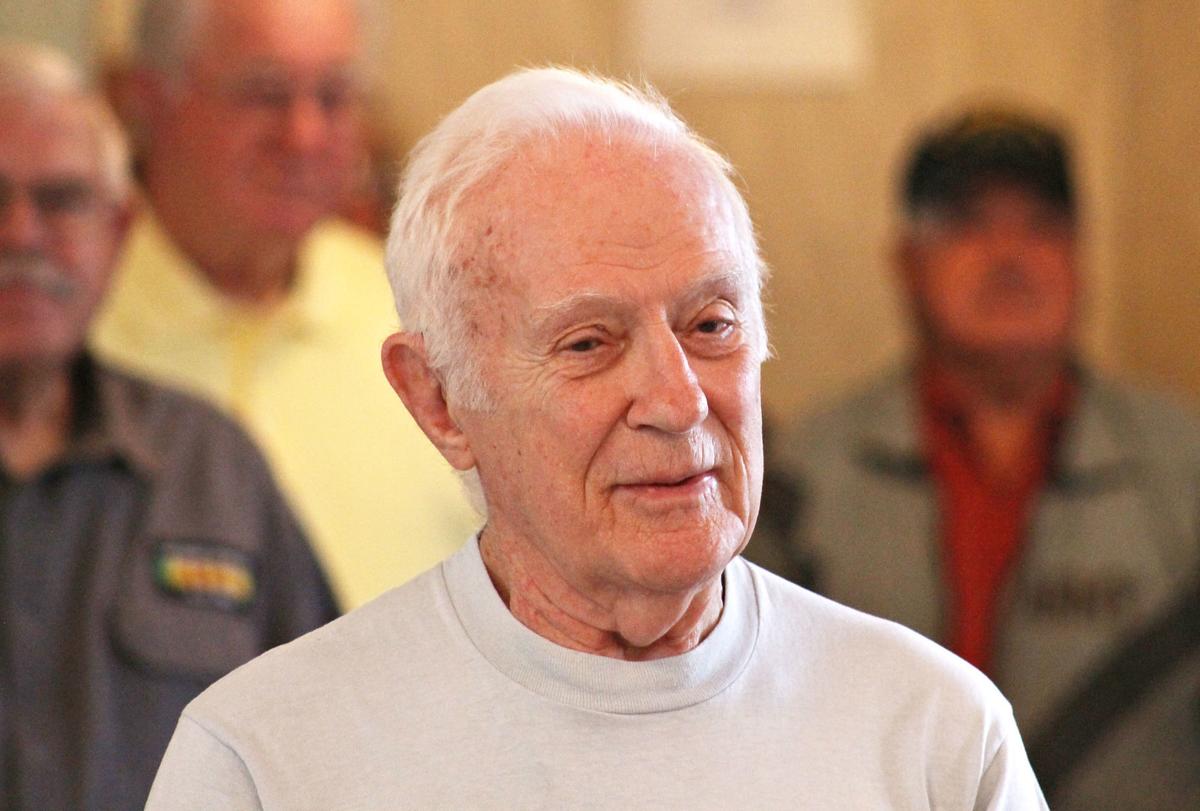 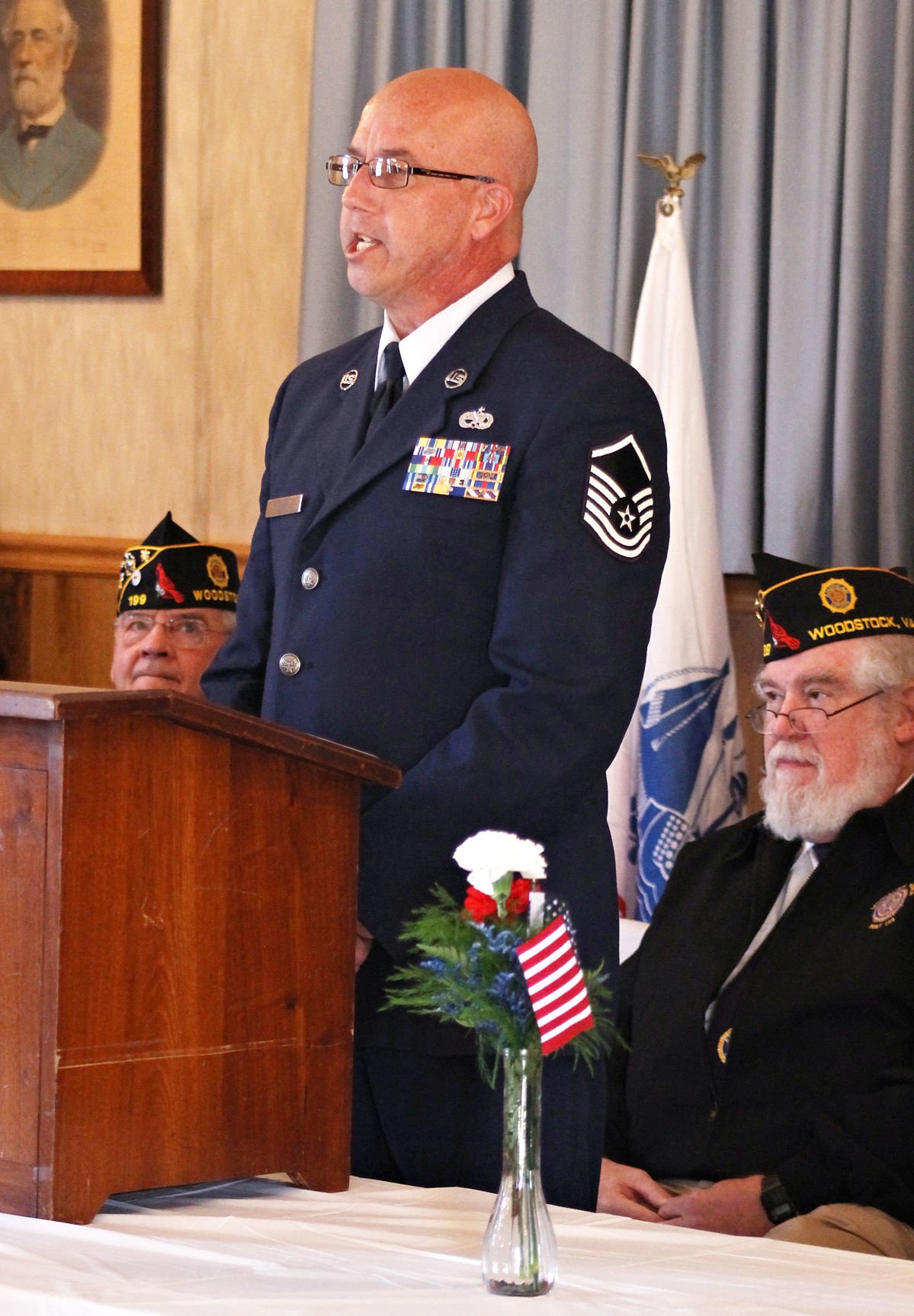 Air National Guard Master Sgt. Kelly Fuqua speaks as master of ceremonies to a room full of veterans and their families at a Veterans Day service held Monday in Woodstock.

Air National Guard Master Sgt. Kelly Fuqua speaks as master of ceremonies to a room full of veterans and their families at a Veterans Day service held Monday in Woodstock.

American Legion Muhlenberg Post 199 in Woodstock and VFW Massanutten Post 2447 in Edinburg held a Veterans Day service at the Woodstock post building Saturday. Master Sgt. Kelly Fuqua, with the Air National Guard in Martinsburg, West Virginia, served as the master of ceremonies for the event.

James Currie Jr., who lives in Jamestown, New York, came to the service with his family who reside in Shenandoah County and to celebrate his 95th birthday. Currie received recognition from the American Legion’s Henry Mosher Post 638 in New York for his service with the 4th Battalion of the U.S. Navy Sea Bees. Currie, drafted in 1943 at age 18, served as a courier at Camp Perry, Williamsburg, Virginia, before earning the rank of Fireman First Class with the U.S. Navy. Currie served in Hawaii and then helped secure the island of Guam where he helped complete construction projects such as securing a valuable port facility and airfields that serviced all the B-29s in the Pacific theater. He then served on Okinawa through 1945 building roads, runways and a ship depot.

“I’ve been lucky that I’m able to serve,” Currie said after the event about what it means to him to be a veteran.

“That’s where I’m luckiest,” Currie said about his family.

The veteran’s son Scott Currie and his wife live in Toms Brook. Scott Currie spoke about his father’s military service.

“You know, for many years you didn’t really realize what he had done,” Scott Currie said. “He never talked about it.”

The veteran’s grandson recently wrote a research paper on his grandfather in a master’s program at Liberty University. Scott Currie said he learned then about what his father did in the service. More than 90 people have come out to see his father during his 95th birthday celebration in the past few days, Scott Currie said.

Fuqua also spoke after the event about what it felt to be a veteran.

“I love the people that are behind me,” Fuqua said. “I do it for them. I do it for my family. I do it for strangers on the street. All of them.

U.S. Navy veteran Ted Peterson serves as chaplain for the Woodstock post and participated in the event. Peterson commented on what he feels being a veteran means to him.

“Right now, it means helping my fellow veterans and the community in a real appreciation for Americanism,” Peterson said.

“How can I be a fellow veteran to those who endured the horrors of war, and particularly those who are maimed or injured?” Pollack read from his written statement. “In sum, others are far, far more worthy than myself.

“Nonetheless, the one thing that tightly binds all of us veterans together, no matter what our particular duties have been, is the most important oath that any American can take – the oath of enlistment,” Pollack added.

He then read the oath of enlistment.

“We solemnly swore,” Pollack said. “Do people solemnly swear to anything anymore? Very little it seems.”

People rarely solemnly pray at meals nor are children taught to pray in school, he said. The attorney said he doesn’t recall seeing anyone solemnly swear in court, which likely occurs if consequences rarely apply and very few people feel accountable to a higher authority.

Pollack went on to speak about the U.S. Constitution, which each veteran swore to uphold. The attorney then spoke about the four parts of the Constitution he felt were particularly worth fighting for: establish justice; secure the blessings of liberty; no law shall prohibit the free exercise of religion; the right of the people to keep and bear arms shall not be infringed upon.

“Injustice angers all of us, so much that it drives some people to kill,” Pollack said. “Defending a constitution that establishes and enforces justice is life-saving and an extraordinarily worthy undertaking.

Americans refused to live under the yoke of the king and parliament of England without representation, Pollack said.

“But arguably - and ironically - we Americans now live under much more restrictive laws than our Founding Fathers risked their very lives and fortunes to get out from under,” Pollack went on to state. “Hopefully, we Virginians will not soon be facing more troubling laws that further restrict our liberties.”

Shenandoah County residents should feel rest assured Del. C. Todd Gilbert, R-Mount Jackson, constantly looks out to protect their liberties, Pollack said. He went on to speak about the protection of religious freedom.

“Government should be neutral toward religious denominations,” Pollack said. “Whatever government does or does not do to promote religions we certainly will not tolerate our government to be antagonistic to religion.”

Pollack also noted that veterans swore an oath to support and defend the Constitution against domestic enemies.

“Today, officials at the highest levels of government are regularly being accused of being domestic enemies such as foreign assets,” Pollack said. “As far as I’m concerned, a domestic enemy is anyone who does not believe in, honor and obeys the Constitution and the principles I just outlined.”

Pollack called on his fellow veterans to uphold their oath and reach out to their elected representatives - members of the Board of Supervisors, statewide officeholders, the U.S. Congress and the president.