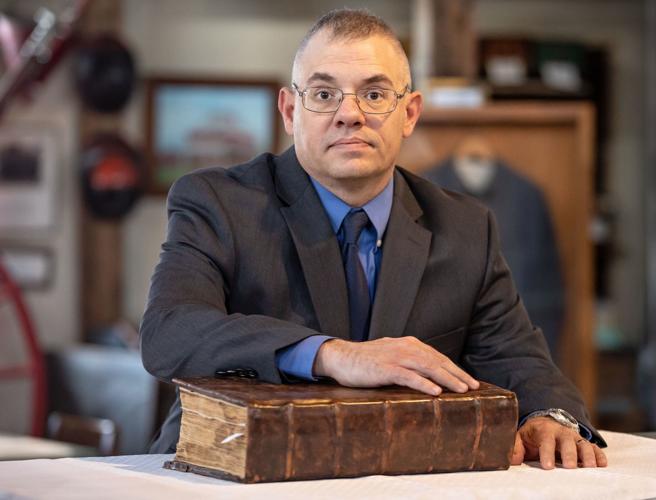 Historian Neil Thorne, of Strasburg, poses beside the preserved 1739 Miller family Bible on display at the Strasburg Museum. Thorne has further researched the 1764 massacre in Strasburg that killed six members of the Miller and Dellinger families. The attackers then killed the Millers’ cat and set its body on top of a burning coal placed on the Bible in I Samuel. The weight and blood from the cat prevented the Bible from being destroyed, leading Thorne to conclude that the mastermind behind the attacks was sending a message. As he continues his research, Thorne hopes to find the Dellinger family Bible, which was referenced online as recently as 1996. 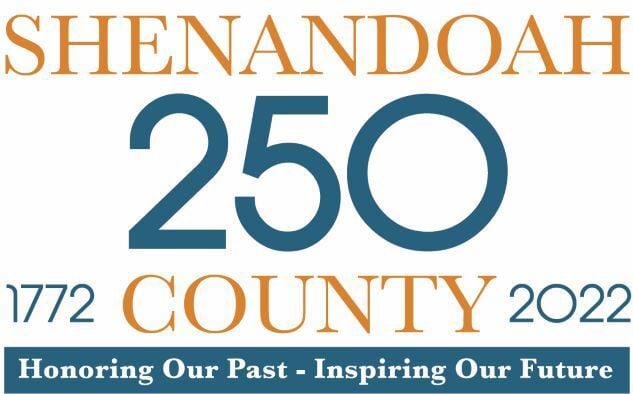 Historian Neil Thorne, of Strasburg, poses beside the preserved 1739 Miller family Bible on display at the Strasburg Museum. Thorne has further researched the 1764 massacre in Strasburg that killed six members of the Miller and Dellinger families. The attackers then killed the Millers’ cat and set its body on top of a burning coal placed on the Bible in I Samuel. The weight and blood from the cat prevented the Bible from being destroyed, leading Thorne to conclude that the mastermind behind the attacks was sending a message. As he continues his research, Thorne hopes to find the Dellinger family Bible, which was referenced online as recently as 1996.

In 1764, four members of the Miller family, of the Clary community in Shenandoah County, were brutally murdered by Native Americans while their youngest, 3-year-old Maria, ran four miles to get help.

This story is connected with one of the key artifacts at the Strasburg Museum — the Miller Family Bible, which has been part of the museum's exhibits for decades and was restored in 2019.

Now, research by local historian Neil Thorne has revealed that the massacre by eight members of a nearby Lenape Native American tribe and one white man was anything but typical.

Instead, Thorne says, it was the work of a vengeful frontier trader who also traded with the Lenape and plotted the attack on the Millers as well as the Dellinger family living nearby. He enlisted the help of the tribe to make it look like a massacre by Native Americans.

Not truly the “Indian attack” it has been called for 258 years, Thorne said, it was instead “a premeditated mass murder that would leave six local citizens dead.”

Though he finished his research about three years ago, Thorne said the COVID-19 pandemic put his presentation on hold for more than two years.

The history was always there, told through the testimonies of two local residents and a newspaper report from immediately after the attacks. But it was inevitably lost to time through retellings.

“It’s been like a game of telephone,” Thorne said. “Each time the story’s told, it changes. So I went back to the original sources, the primary sources.”

At dawn on Aug. 22, 1764, the eight Lenape lay in wait near the Dellinger homestead, one mile west of the new town of Strasburg, Thorne’s video explains. They were brought there by the trader Abraham Mitchell.

John Dellinger, 34, stepped from his cabin to begin morning chores and was immediately killed.

His wife, Rachel, and infant were taken captive by the attackers, who next targeted the Millers, who lived in Clary, about three miles north of town.

There, Johann George Miller, 57, his wife, Mary, and their two middle children, 10-year-old Anna and 6-year-old Johannes, were spreading flax in the field.

Johann George Jr., 19, was away in Alexandria apprenticing in the saddlery trade, and Maria, 3, was sick in the family cabin.

From her window, Maria watched as her family was slaughtered. She made her escape out the back and followed a path that Thorne said her father taught her: Run toward the mountain, follow the water, head for the fort.

Arriving first at Benjamin Stickley’s, she found no one at home, so she continued following the water to Bowman’s Fort.

There she found 17-year-old Abraham Bowman. He listened, noting her tattered and filthy clothes from her four-mile run. Then, rifle in hand, he rode off on horseback to assist the Millers.

To the north, 25-year-old Thomas Newell heard the gunshots and ran to their aid, narrowly missing the attackers who Thorne said would have killed him too.

Newell arrived first, finding the Millers dead. Once Bowman arrived from the south, the two hurried to get help at Major Stephen’s Fort and from Fry’s Rangers, who sent out the alarm across the frontier.

A group formed and a pursuit began before dawn the following day.

As the Lenape fled, they decided that the Dellinger infant was slowing their escape, so they killed him at Sandy Ridge.

But the militia and Rangers caught up with them in the South Branch Mountains. They killed one of the Lenape, causing the others to flee, and they freed Rachel Dellinger.

This all happened as the French and Indian War was ending, and attacks had been occurring around the region with enough regularity that Miller had taught his children where to run for help in just such a situation.

But although Virginia had two more bloody years of conflict with Native Americans after the 1764 attacks, Thorne said there were no more attacks near Strasburg.

Besides the written accounts, the biggest clue to what happened is in the Miller Family Bible, a 1739 German Folio that survived even though the attackers placed a burning coal on top of it along with the body of the Millers’ newly killed cat.

“The story keeps getting told that they were trying to burn down the Miller house,” Thorne said. “The thing to remember is that these folks were building fires every single day.”

If you don’t want a fire to happen, he said, put a coal on a thick book and then throw a dead cat over it.

The weight and blood from the cat served to protect all but a few pages from being destroyed.

“The coal in the Bible was not an attempt to burn the cabin,” Thorne said.

In fact, he said the cabin didn’t burn down for another 200 years, when it caught fire because of a teenage party in the 1960s.

Thorne bases his research, in large part, on an interview that Newell gave in 1833 to Samuel Kercheval for his book, “A History of the Valley of Virginia.”

The coal was placed on the Bible in 2 Samuel, which is “a very dark chapter” containing betrayals and death, Thorne said.

Mitchell was sending a message to the neighborhood about why he was upset and why he carried out the attacks, Thorne said.

About a year earlier, while visiting Strasburg, Mitchell had been accused of a petty act of theft and publicly punished at Bowman’s Fort.

Johann George Miller and John Dellinger (son of prominent local founding citizen Christian Dellinger) were the ones to carry out that punishment.

“This was an act of vengeance,” Thorne said.

After the attacks, Johann George Miller Jr. returned to the valley, fathered several children and lived to age 56 in the Oranda community of Shenandoah County, according to Thorne.

Newell, first to arrive at the Millers', became a prominent Shenandoah County landowner and farmer living to age 93.

Bowman went on to command the 8th Virginia German Regiment during the Revolutionary War after serving under Peter Muhlenberg. His grandson founded the University of Kentucky.

“If Abraham Bowman had run across the group, he would have certainly been killed,” Thorne said, which “would have significantly changed history.”

No authorities looked into who Mitchell was or why he came back to the area in 1764, Thorne said.

“He went back to trading,” Thorne said.

There were nine people named Abraham Mitchell living in the colonies at that time, so Thorne has pinpointed the likeliest one as Abraham Mitchell Jr., 28, son of a Quaker hatter and a well-known trader among the Shenandoah Valley, Philadelphia and Fort Pitt, now Pittsburgh.

Mitchell Jr. traded mostly with the Delaware (Lenape) Nation living at that time near Fort Pitt, Thorne wrote in his presentation notes.

“Abraham Sr., Abraham Mitchell Jr., and his brother Thomas were known on the frontier as ‘the Three Mitchells.’”

A company bearing Mitchell Jr.’s name held land in Hardy County, West Virginia, for a time before he settled in North Carolina.

Local resident Rebecca (Bowman) Brinker, Abraham Bowman’s sister, was integral in detailing Mitchell's connection to the Millers and Dellingers, telling Kercheval in 1833 that she witnessed Mitchell's punishment at Bowman’s Fort in 1763. She didn’t specify what that punishment was, only telling the author that it was inflicted by Johann George Miller and John Dellinger.

“Given Mitchell was accused of theft, and that two carried out the punishment, it can be assumed the punishment was some sort of whipping, flogging, or other physical act,” Thorne told The Daily.

As for Rachel Dellinger, there is no written reference to her after she was rescued. Thorne assumes she returned to Pennsylvania where she had connections, but he hasn’t found any evidence.

Still looking for details on the story, he’s hoping to find the Dellinger Bible, which was referenced on the internet as recently as 1996. He said the Bible could shed light on her maiden name, as well.

Gene Hammond, in his 1987 book, “Shenandoah Valley Pioneer Settlers,” suggests her maiden name was Miller, but Thorne said there are no details and nothing more has been found.

“It leaves a bit of a mystery yet to be solved, that I hope will inspire and encourage others.”