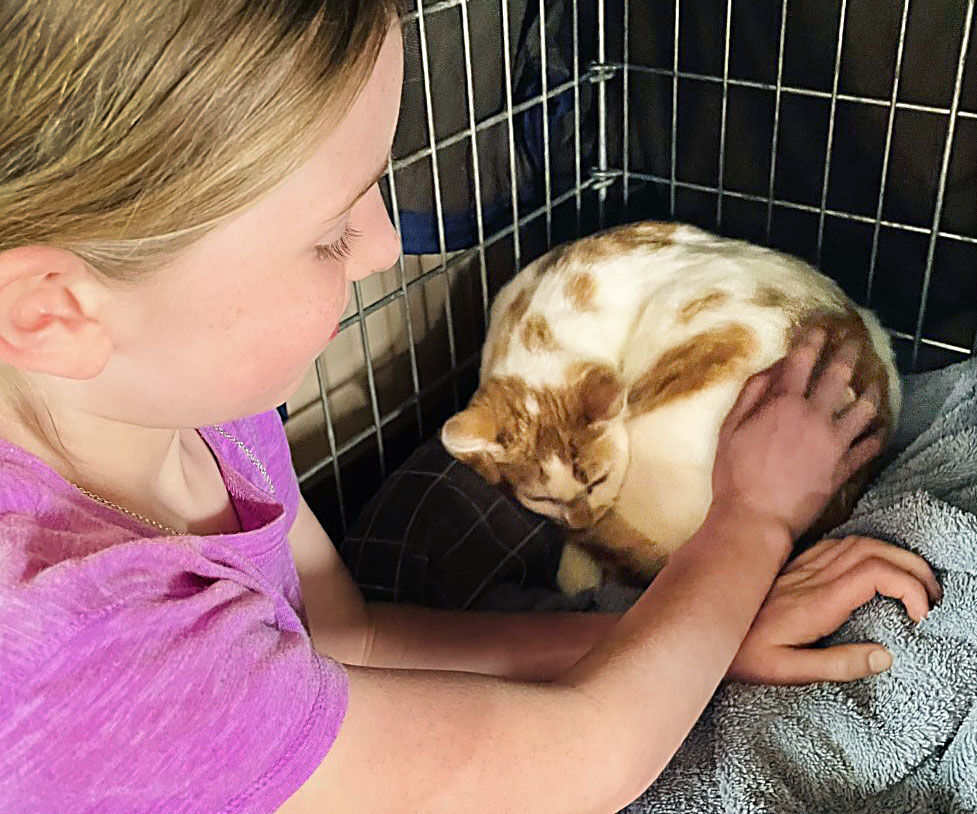 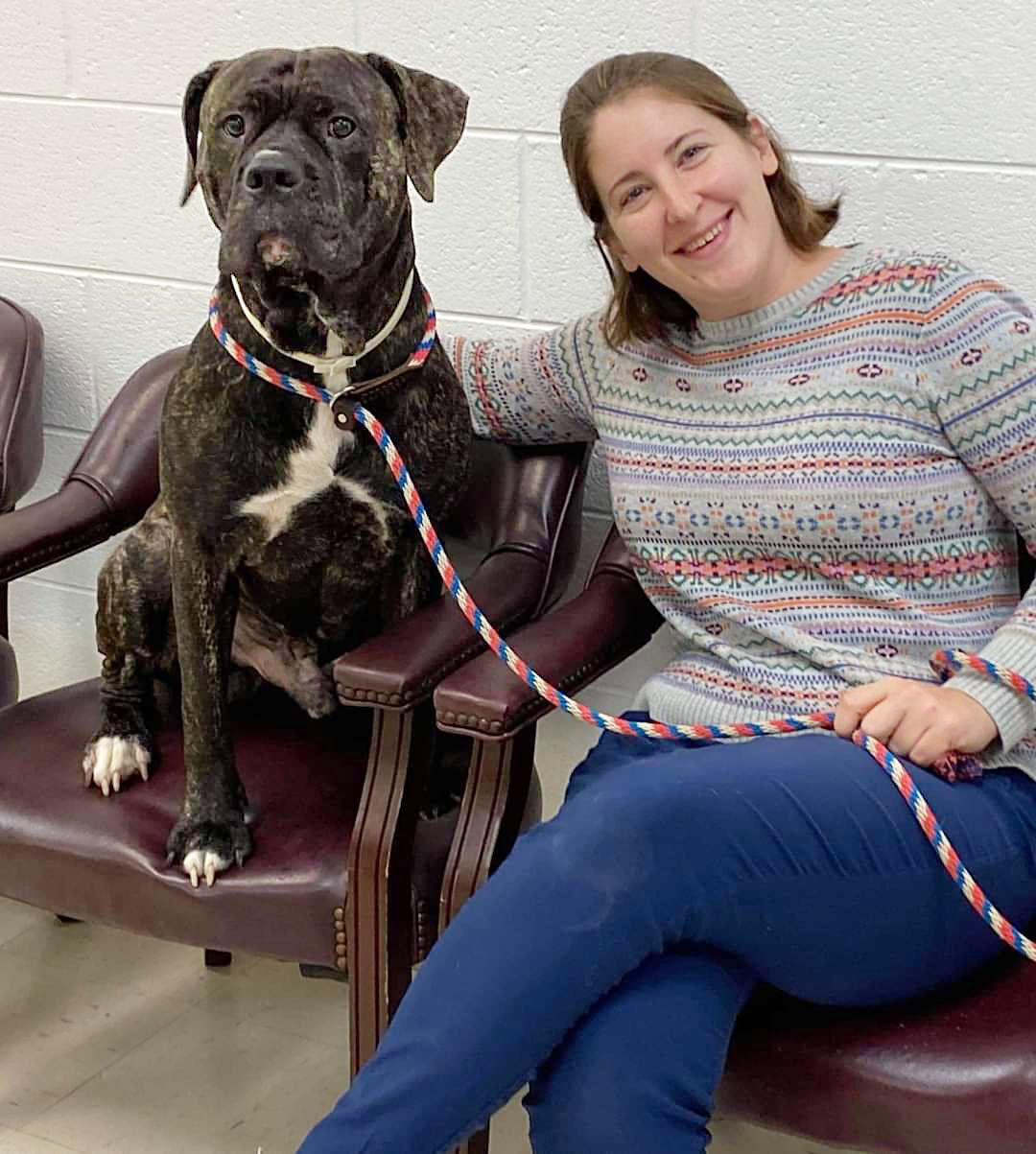 Cletus sits next to Meghan Bowers, executive director of the Humane Society of Warren County. 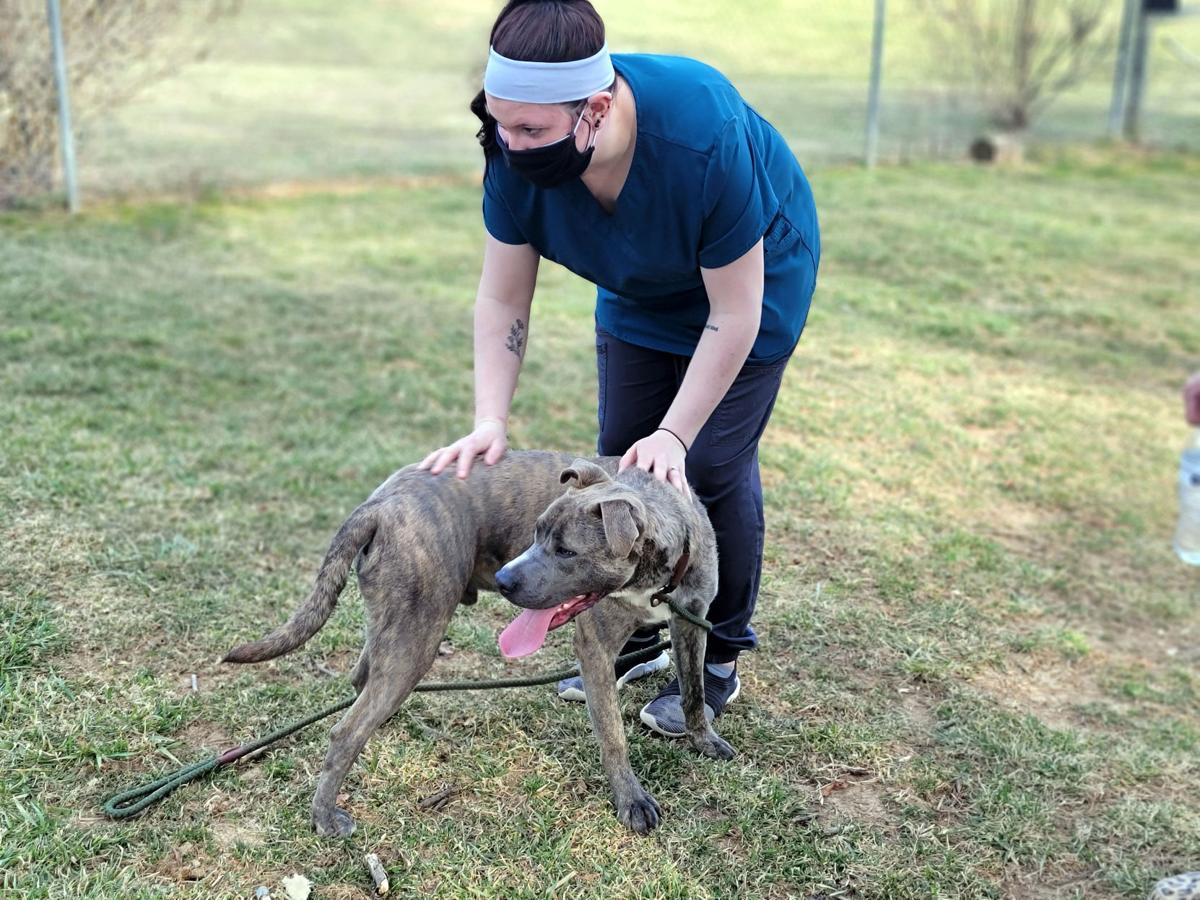 {p class=”x_MsoListParagraph”}Emily Trotman plays with Chance at the Humane Society of Warren County.{/p} 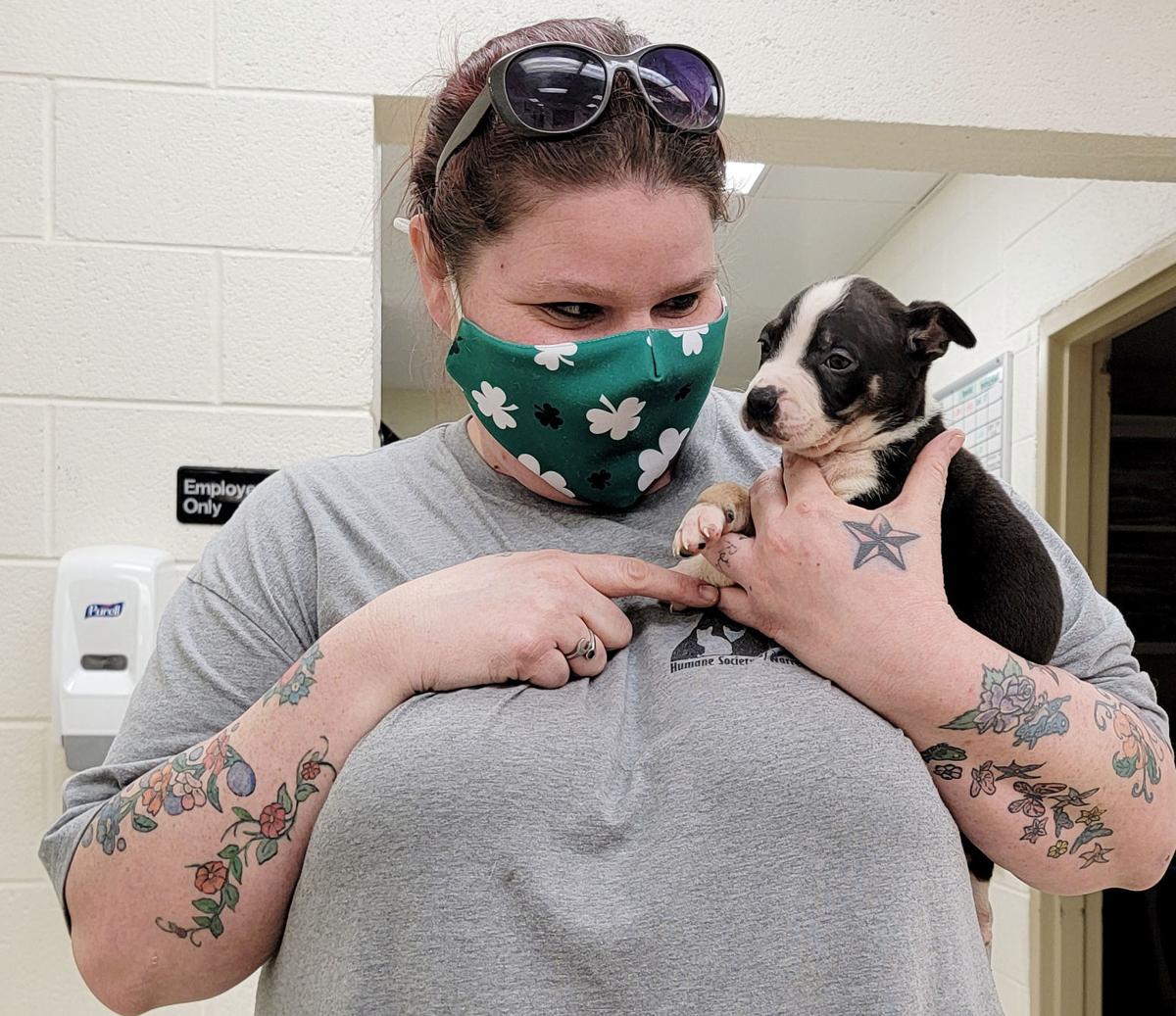 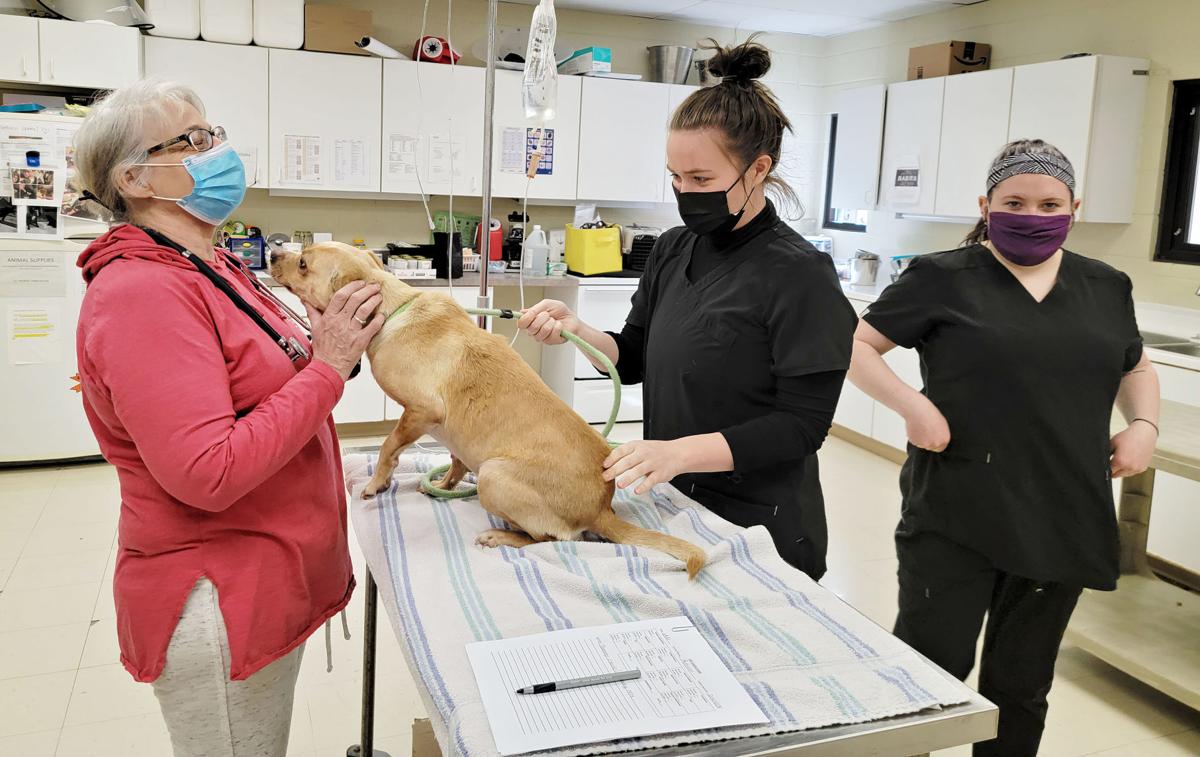 Cletus sits next to Meghan Bowers, executive director of the Humane Society of Warren County.

{p class=”x_MsoListParagraph”}Emily Trotman plays with Chance at the Humane Society of Warren County.{/p}

Area nonprofits that help cats, dogs and other animals kept busy over the past year despite the COVID-19 pandemic.

The Humane Society of Shenandoah County adapted its operations in response to the pandemic to keep its volunteers safe, the nonprofit’s Board of Directors President Melisa Miller-Piselli said recently. The organization had to cut back on the number of events volunteers attended to promote the nonprofit’s work. The nonprofit couldn’t hold one of its bigger fundraisers last June as a result of the pandemic.

Miller-Piselli said most of the volunteers still don’t feel safe going to some of the usual events.

The organization also had to change its adoption process. Out of a concern for safety, volunteers no longer interview prospective adoptees in person. Volunteers now conduct interviews over internet chat or meeting services, Miller-Piselli said. When the adoption is approved, volunteers meet with the adoptees to transfer the animal to them.

“That’s how we’ve had to kind of adapt and we’ve seen an increase in people interested in wanting to foster and help,” Miller-Piselli said. “We’ve just all had to be really careful, follow all the governor’s guidelines and make sure if we hear anybody’s been exposed or something we have to wait until they’re tested and they’re cleared.”

“We’re constantly networking to get them placed with all of those groups and thankfully we’ve built some strong relationships with them to help us,” Miller-Piselli said. “Even though we have fixed over 15,000 cats since our program has started, our area is just really saturated with cats.”

The Humane Society of Shenandoah County operates a spay-and-neuter program in partnership with the Anicira Veterinary Center twice a month. Volunteers meet at the Edinburg park on Monday morning and then transport the animals to the center, where the veterinarians perform the operation. Volunteers bring the animals back to the park the next morning.

There were a few months in 2020 when the group could not hold the spay-neuter program. The group offered the “rescue” or discount rate to pet owners who could take their animals to the veterinary center that provided curbside service.

The nonprofit eventually resumed the transportation part of the spay-neuter program and offered the service at the park. Volunteers asked animal owners to fill out forms and make payment, if possible, online before coming to the park. Owners would stay in their vehicles and the volunteers would pick up the animals for transport.

The organization also runs a trap-neuter-return program for community cats. Volunteers helped to trap and neuter feral cats in colonies around the county.

“It’s not uncommon for people to have 10-30 cats that we have to fix,” Miller-Piselli said. “Unfortunately, we still see large colonies.”

“We recognized years ago that our local shelter was struggling with the amount of pit bulls that were coming into the shelter and we realized we couldn’t take them all into our foster homes or our care, but we could help since that particular breed has so many puppies in a litter,” Miller-Piselli said.

The Humane Society of Warren County thrived throughout the pandemic, according to Executive Director Meghan Bowers. Like many other shelters, the Warren County facility limited in-person visits to approved adoptions, Bowers said.

The shelter’s efforts to find homes for their animals didn’t change during the pandemic, Bowers said. The shelter has both “tricky,” harder-to-place animals as well as those that are easier to re-home.

“We also have puppies right now and ... people are submitting a lot of applications for them,” Bowers said. “I wouldn’t say there’s really been a big change.

“People still want the kittens and puppies and highly desirable animals and when we do have one we get a lot of response,” Bowers said. “So I would say it’s about the same as what we’re accustomed to.”

Like many nonprofits, the Warren County organization relies on donations, both monetary contributions and supplies such as food.

Fundraising events yielded twice the usual amount in donations, Bowers said. The shelter received many donated items for its annual yard sale, she added. The shelter has seen more financial donations but from fewer people over the year, Bowers said.

“Financial, money donations as well as supplies have done really well throughout the pandemic,” Bowers said.

The executive director said 2020 was a successful year for the organization.

Furry Friends Animal Rescue Inc. takes in animals in need of help and they rely on foster homes like other similar nonprofits. Robin Bradfield serves as president of the Woodstock organization.

Furry Friends works with other groups especially when helping to find foster homes for dogs. The group adopted out about 125 cats last year, she said. Furry Friends just took in 13 kittens born within three days.

Furry Friends can help owners feed their animals if they cannot afford to buy food. The group also can provide outdoor shelter for animals, Bradfield said.

Furry Friends operates out of a thrift store in the shopping center in the north end of Woodstock. It sells donated items to raise money for the organization’s rescue program. Furry Friends auctions some items through its Facebook page. Another store, On Second Thought, also sells items such as clothing to help benefit the rescue organization.

Furry Friends considered closing the thrift store when the pandemic hit, particularly as people stayed at home to avoid catching the virus.

“The first four months was a nightmare,” Bradfield recalled. “I really was starting to think that we were gonna lose it all, but the public helped us.”

“Foot traffic is much better than it was,” Bradfield said. “Most people do come in wearing their masks. I don’t actually make them, you know, I don’t turn them away if not because ... it’s not (my) business why they’re not wearing that mask.”

But the organization still relies on the public’s help and the auctions, she said.