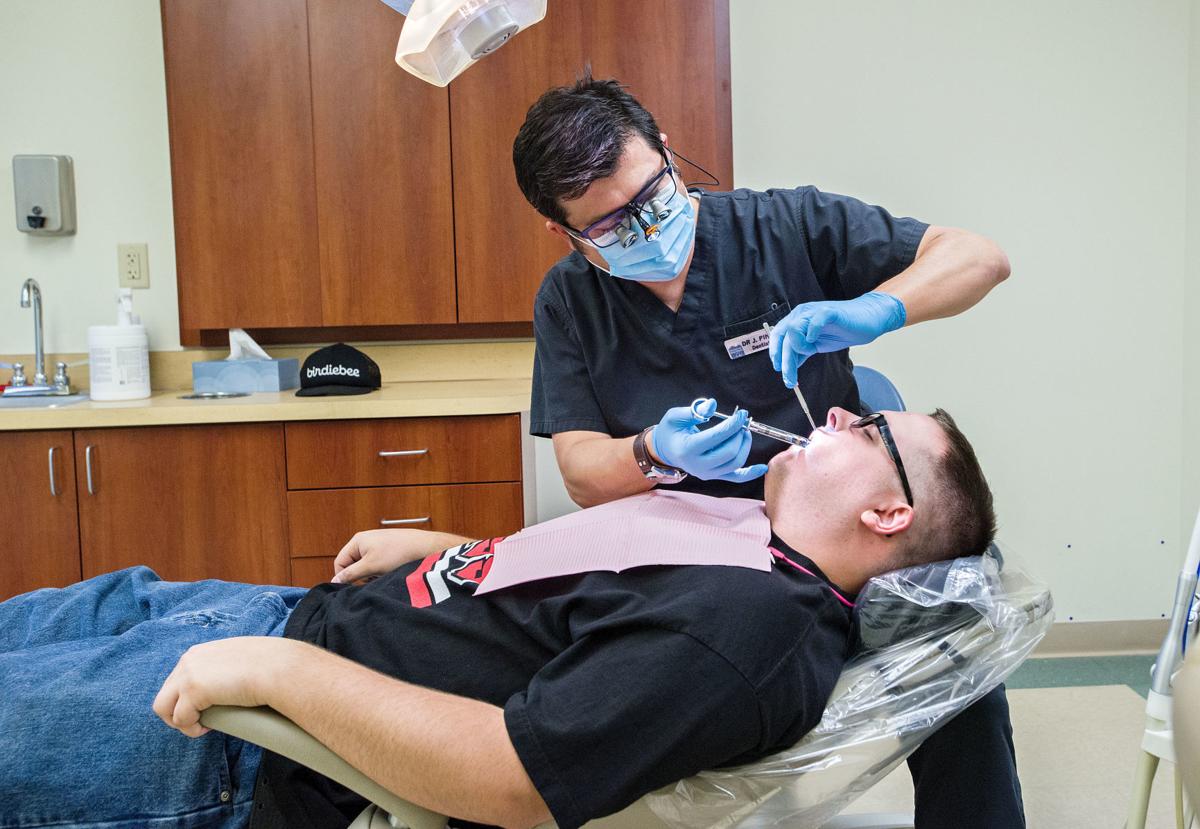 Dr. Joan Pino treats Aaron Trump, 23, of Edinburg, with a tooth filling inside the Shenandoah County Free and Dental Clinic in Woodstock on Thursday. 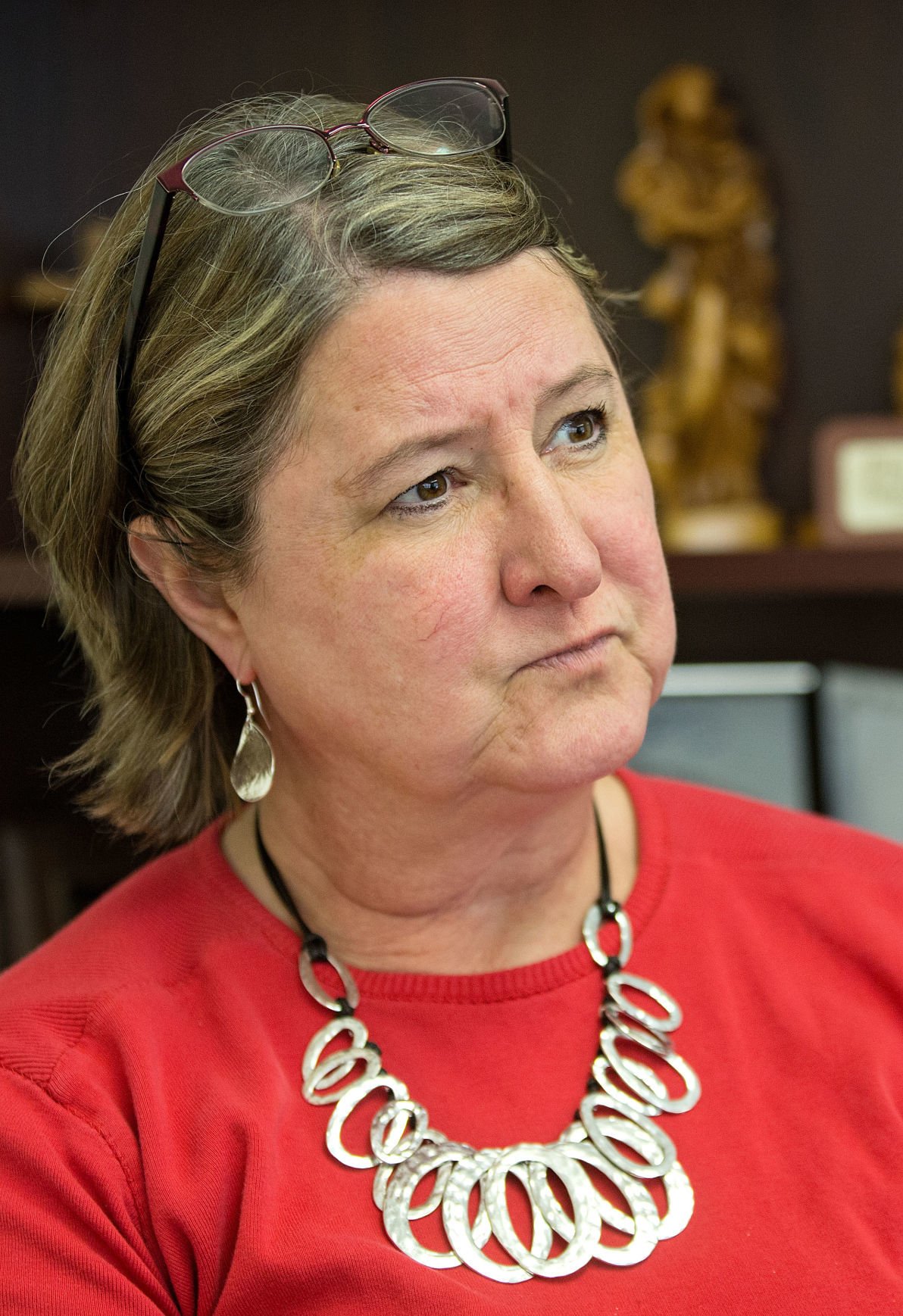 Pam Murphy, executive director of the Shenandoah Community Health Clinic in Woodstock, recalls having to fight to get a couple of patients specialty health care over the years.

“We had a lady who had hydrocephalus,” Murphy said, referring to a condition in which fluid builds up in the brain.

The patient, a caregiver, needed brain surgery, but that would have cost $60,000, and she couldn’t find anyone in the region who would treat her for less.

“[S]he didn’t have insurance and she didn’t have the money to pay,” Murphy said. “Our wonderful nurse found a doctor in Roanoke who would see her.”

The free clinic, at 124 Valley Vista Drive, Woodstock, also arranged for transportation for the patient to get to Roanoke for pre-op, surgery and post-op.

“We watched her lose weight,” she said. “Every time she came, she looked worse.”

The patient needed an ear, nose and throat specialist but couldn’t afford one.

A clinic nurse talked with a nurse at Winchester Medical Center, who recognized the patient as her estranged sister. But care came too late, and the patient didn’t survive.

“I think that’s one of the most devastating things about not having insurance, is if you just really can’t get the care you need,” Murphy said, choking up at the memory. “I’m really glad that the most indigent people in Virginia have some kind of resource that they can fall back on.”

With the recent Health Insurance Marketplace and Medicaid expansion in Virginia, uninsured and underinsured residents have a chance at more medical care, but area clinic directors are stressing that Medicaid doesn’t take the place of donations that free clinics rely on.

Murphy said Medicaid reimbursements don’t come close to covering the expenses of her clinic, which gets about $1,000 to $3,000 per month in reimbursements from Medicaid. “We’re spending a lot more than that,” Murphy said.

“We don’t want to not help these low-income families, but all of these pre-authorizations, all of the paperwork that’s required, the extra staff to process all of these approvals, it’s costing us more than we’re making.”

It’s expensive to become a Medicaid facility, said Vicki Davies, executive director at St. Luke’s clinic, at 316 N. Royal Ave. in Front Royal. To accept Medicaid, she said the clinic would have had to get a computer system and hire someone to do the billing.

“We’re a small clinic, we’re a much smaller clinic than they are [in Woodstock], and we didn’t know where it [Medicaid] was going to go. But we’re affiliated with Medicaid, so we can still take patients that have Medicaid.”

Davies said a lot of patients come to St. Luke because there aren’t enough providers in the area to accept them, and providers might also have waiting lists.

She said they can refer patients out for lab work and specialists who do bill for Medicaid.

Though she feared the clinic would lose patients who used to get free medication at the clinic, Davies said those patients can get free prescriptions through Medicaid now.

“They can get their prescription filled for free at a pharmacy,” she said.

“It’s still too soon in the [Medicaid expansion] process to know how it’s going to affect us,” she said. “We had to kind of rediscover ourselves and we’re still not sure.”

The Shenandoah clinic is short-staffed right now, and Murphy said she’s hiring more doctors and counselors and is always looking for volunteers to do pretty much anything, such as data entry, scanning of files, answering of phones and even language interpretation. Most of her translation needs are for Spanish, but she said she’s also had patients who speak other languages.

“We’re trying to do a lot of counseling now. We have four counselors on staff,” she said.

“We are a health professional shortage area in Shenandoah County for medical, dental, and behavioral health. And behavioral health is the biggest shortage that exists of those three, so there’s probably a lot more people that don’t even know that we do that, that could use our services.”

Half or more of her patients don’t have insurance, so they’re paying the low rates the clinic asks as a suggested donation -- like $2 or $5 per visit, she said.

The Shenandoah clinic got its largest grant of $130,000 this year from the Virginia Health Care Foundation to fund two full-time counselors. Last year, the Holtzman Corp. gave $50,000 and some others donated toward the satellite clinic. The Strength in Peers peer-support group purchased some equipment for a satellite clinic at the Shenandoah County Public Schools campus in Quicksburg, and state and county funds have also helped.

“We still operate primarily on donations and grants,” she said.

“We don’t want people to let insurance or no insurance get in the way,” she said. “We want to keep our doors open to everybody.”

St. Luke, which started in 1996, gets its largest donations from the United Way and the Virginia Association of Free Insurable Clinics, as well as private donations from churches, civic organizations and individuals.

“We couldn’t do without Valley Health.”

She said she’s seen hospitals offer charity care if patients are under the poverty level and a sliding scale of payments for those without insurance.

Both clinics also host fundraisers throughout the year.

St. Luke held a yard sale on Friday, with all proceeds going to dental care for patients. On the last Saturday in September, they hold a dinner and auction as their main fundraiser of the year.

Shenandoah will host its main fundraiser, the Sparkle Gala, on Dec. 7 at the Yellow Barn at Shenandoah Caverns. “It’s a lovely way to kick off the holiday season,” Murphy said.

It offers chronic care by appointment on Monday, Wednesday and Thursday. A walk-in clinic for established patients is available on Tuesday. The clinic offers services for new walk-in patients from 5 to 6:30 p.m. Requirements for new patients are listed at https://saintlukeclinic.org.

The clinic has a chiropractor in the office one day a week and mental health care twice a month. Davies said patients with severe cases can get care at Northwestern Community Services in Front Royal.

The clinic also offers dental services, but the dentist has a year-long waiting list, Davies said. Seeing up to eight patients one day a week, the clinic can see about 416 patients a year for dental care.

This has been a huge problem in Warren County, Davies said.

“There is no affordable dental care in this area for people without insurance,” she said. The closest clinic she knows of that offers a sliding scale for dental care is in Baker, West Virginia.

In Warren County, she said about 2,200 people are eligible for health care through the free clinic, but she only sees 787 unduplicated patients a year.

Dental care is available in Woodstock from 8 a.m. to 5 p.m. Monday through Thursday. Medical care is available at the main offices from 8:30 a.m. to 5 p.m. Tuesday and Wednesday. The satellite clinic in Quicksburg is open on Mondays, but summer hours will be different than school year hours. The clinic lists requirements and other information at https://shenclinic.org.

The Woodstock clinic began in June 2002, and Murphy said school services at the Quicksburg campus started in 2017. Last year, the satellite clinic also began serving the community in that area, which includes Mount Jackson and New Market with limited hours and a full-time counselor.

Together, the two Shenandoah locations spend about $800,000 providing nearly $5 million in services each year, Murphy said, including the cost of medication.

“I think the biggest change that we’re seeing has been that a lot more people can get dental care now,” Murphy said. “Most of the Medicaid plans cover at least some dental care now.”

“Definitely the business in the dental clinic has picked up, and that’s been great to see.”