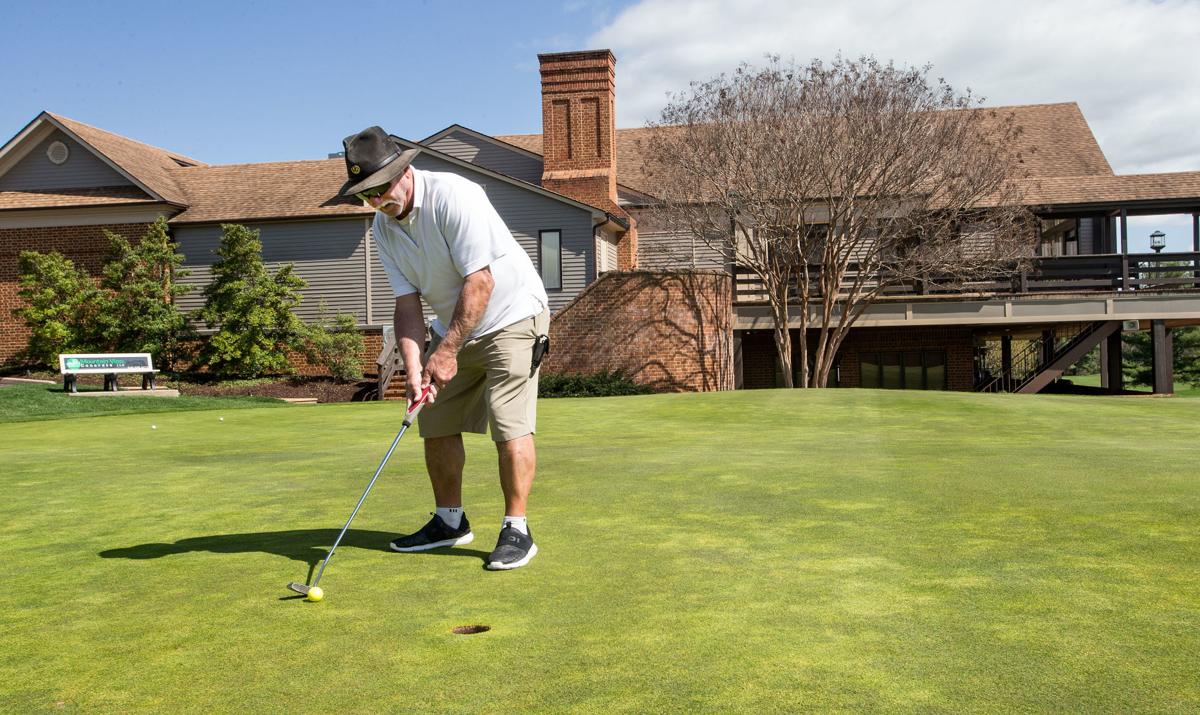 Lee Rollison, 72, of Harpers Ferry, West Virginia, lines up a putt at Shenandoah Valley Golf Club in Front Royal on Wednesday. Virginia is allowing golf courses to continue to operate as long as they are following social distancing protocols. 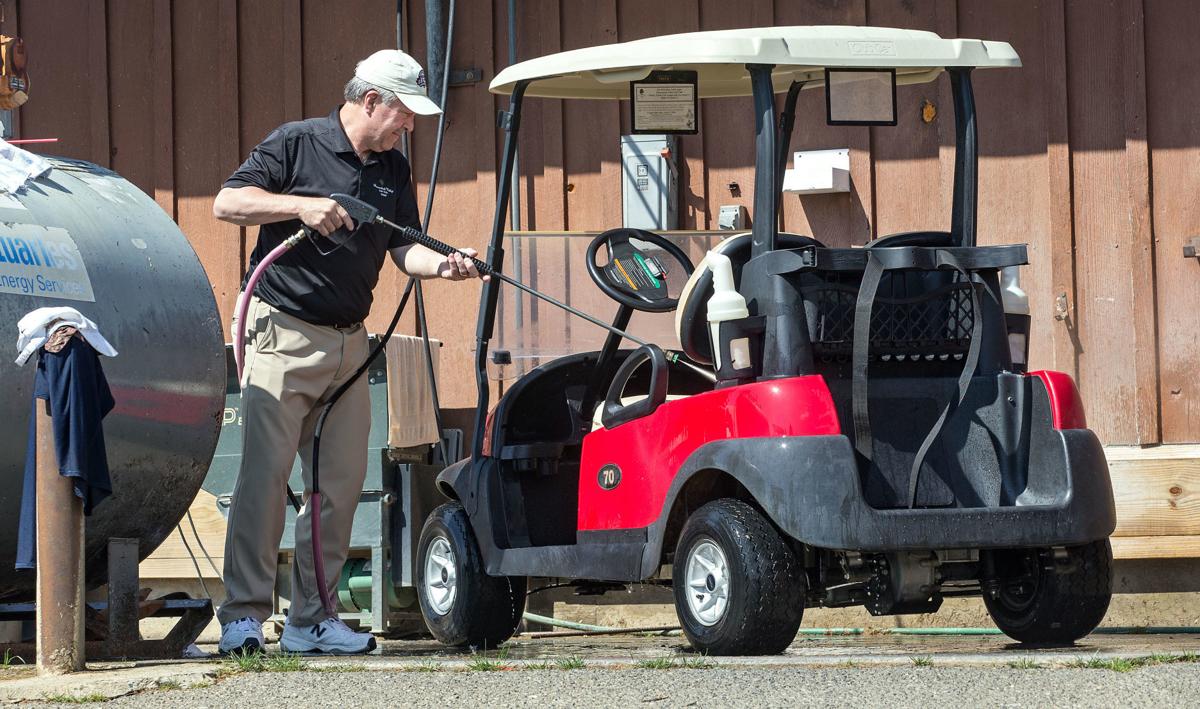 Randy Legge, pro shop manager at Shenandoah Valley Golf Club, washes down a cart at the golf course on Wednesday. The course has 86 carts and Legge was busy keeping all of them in circulation. 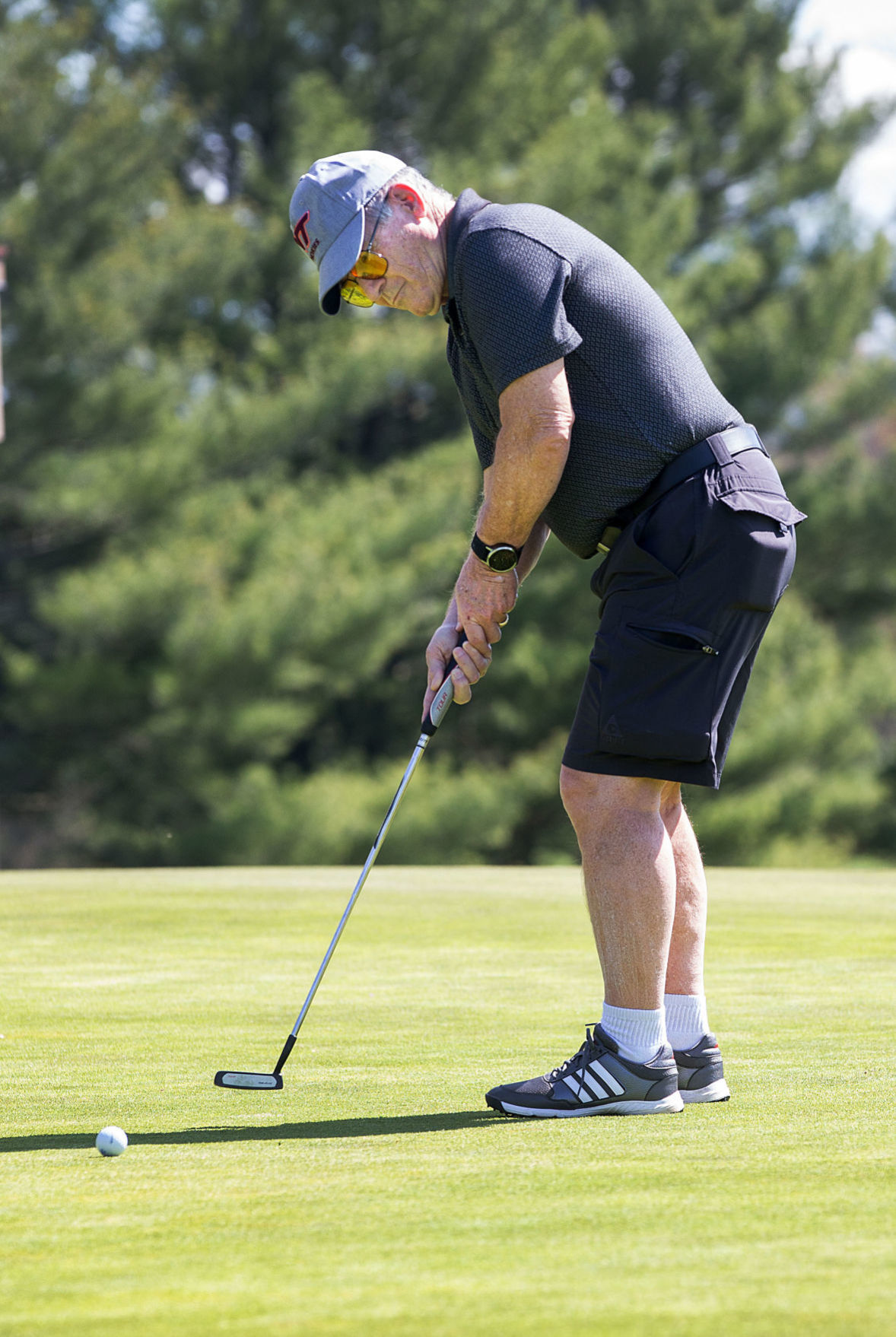 Dale Robinson, 72, of Winchester, practices his putting at the Shenandoah Valley Golf Club on Wednesday.

Lee Rollison, 72, of Harpers Ferry, West Virginia, lines up a putt at Shenandoah Valley Golf Club in Front Royal on Wednesday. Virginia is allowing golf courses to continue to operate as long as they are following social distancing protocols.

Randy Legge, pro shop manager at Shenandoah Valley Golf Club, washes down a cart at the golf course on Wednesday. The course has 86 carts and Legge was busy keeping all of them in circulation.

Dale Robinson, 72, of Winchester, practices his putting at the Shenandoah Valley Golf Club on Wednesday.

FRONT ROYAL — While many outdoor activities might be shut down due to the COVID-19 pandemic, one is still going strong in the area — golf.

The weather was perfect in the area for golf on Wednesday and many people were taking advantage of it.

"You got separation," Lee Rollison said. "You're out here in the open air, I guess. We're blessed."

So Rollison traveled to the Shenandoah Valley Golf Club in Front Royal on Wednesday and said he's been there several times since the pandemic started. Rollison said he is concerned about the pandemic, but he believes everything is safe at the Front Royal course.

"Up here it's 27 holes, you're actually separated, which is a good thing," Rollison said. "It's a real nice course. They really take care of it. I think they're abiding by the rules."

While some states have forced their golf courses to shut down, Virginia Gov. Ralph Northam is still allowing golf courses to stay open as long as they meet the safety requirements. All of the golf courses in the area are open and plenty of area golfers are enjoying it.

Jeff Foreman, head pro at Shenandoah Valley Golf Club, said that they are doing everything they are supposed to do as far as making sure it's a safe environment.

"Nobody is within 6 feet of anybody; inside the pro shop it's the same way," Foreman said. "We're keeping social distancing at a maximum. We're disinfecting all the carts and keeping everything sanitized and doing what we need to do. We have removed all the (sandpit) rakes just like every other course has, I think. We have noodles at the bottom of the cup, so you don't have to reach in the cup. The new (United States Golf Association) rules are that you don't need to take the flag out (on the green). So we ask everybody to leave flag in."

Foreman said that events such as weddings and banquets have been postponed, which has hurt the business some. However, he said that they have still had plenty of golfers come out to play throughout the week, especially on the weekend.

Dale Robinson, 72, of Winchester, said he loves to play golf and is grateful he could come to Shenandoah Valley Golf Club and play a round of golf on Wednesday.

"If you think about it, there's no reason not to be out here," Robinson said. "There's no serious threat out here. The governor says you can play golf, so here we are."

Another thing that has changed throughout the area is that the food bars have either been moved outside or shut down.

At Bowling Green Golf Club in Front Royal, the clubhouse has moved outdoors and food is being cooled on the grill. Adam Engley, general manager at Bowling Green, said that with the new rules much has changed for them.

"We've had to shift everything outdoors and utilize our beverage carts and our online ordering system in the (golf) carts," Engley said. "Business is still good, but we're also allowing people to bring their individual, non-alcoholic beverages. Overall, it's been very good and positive, and people are respecting the rules."

Brian Jones, general manager at Blue Ridge Shadows Golf Course in Front Royal, said that he believes business has been about the same as usual for this time of the year and considering the weather.

Jones said one thing he's noticed is how grateful the golfers have been.

"We've had a lot of folks actually stop in after their round or when they're going out and just thank us for being open," Jones said. "That's not something that would happen under normal operating conditions. That's not something that would happen to my recollection. I have noticed that there is an appreciation. I think they understand that it's definitely challenging in the way that we operate, some of the things that we have to do and they appreciate that we take that on."

Jones said that while he knows many of the golfers who are coming to play golf at his course, there are some he doesn't know or know their background. He said it is a little scary for him and his workers, but he wants to give the golfers a place to come out and play and take their minds off of things for a while.

Front Royal resident Zack Henry, 26, said he is taking the COVID-19 pandemic seriously and gave it a lot of thought before coming out to Blue Ridge Shadows on Wednesday. The 2011 Skyline High School graduate said that he trusts the workers at the golf course and Jones.

"It's great that they're doing everything they can to keep it safe," Henry said. "Brian's (Jones) really great in general and he's done a good job."

Colton Harlow, a 2014 Stonewall Jackson graduate, is waiting for his professional baseball season to begin. The relief pitcher for the independent league Lake Erie Crushers said one of the things he's been doing to pass the time lately has been playing golf at Bryce Resort in Basye.

"The weather has been pretty promising lately," Harlow said. "It's been getting a lot nicer. I've been going out with a bunch of close friends and some people that I haven't talked to in a while. So it's been a cool experience for me. Obviously, I love golf. So getting to do that with people that I love and good friends it's been really nice, especially since we've been cooped up in the house. It gives everybody a little fun time to come together and hang out."