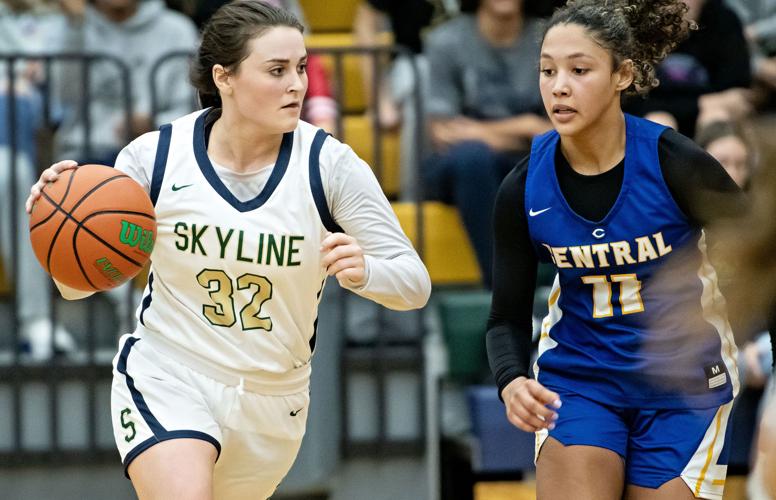 Skyline’s Jamie Kelly dribbles the ball up the floor as Central’s Chloe Helsley defends during their Dec. 9 game in Front Royal. Kelly has been around the game her entire life and is leading the Hawks this season. 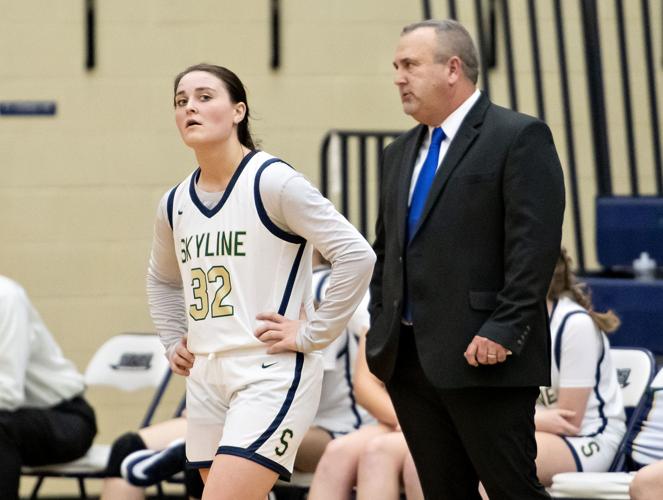 Jamie Kelly on the court with her dad and coach John Kelly during their Dec. 9 game against Central.

Skyline’s Jamie Kelly dribbles the ball up the floor as Central’s Chloe Helsley defends during their Dec. 9 game in Front Royal. Kelly has been around the game her entire life and is leading the Hawks this season.

Jamie Kelly on the court with her dad and coach John Kelly during their Dec. 9 game against Central.

The Skyline three-sport standout senior had two older brothers who played and a father who is a coach, so it’s not surprising that she has a real love for the game of basketball.

“Basketball, for me, it just feels like home,” Kelly said. “I’ve played my entire life. So being around it, it just gives me comfort.”

Kelly said her father, John, moved the family to Front Royal when she was 9 months old after he became Warren County’s girls basketball coach.

Jamie Kelly said she always went to practices, and she was around the teams and played with older kids.

“Growing up I always got to practice with the older girls and boys,” Jamie Kelly said. “So it always made me a tougher player, knowing no matter who I face I’ll always play my hardest.”

Another thing that always helped Jamie Kelly was having two older brothers, David and Michael.

“I always looked up to them,” Jamie Kelly said. “They were always my competition, basically. I always wanted to prove your little sister is better than you. We still do to this day, we still argue about who’s the best basketball player.”

John Kelly said having two older brothers helped Jamie become even more competitive. It also helped her desire to want the ball in her hands with the game on the line.

Jamie Kelly said her favorite part of the game is the fourth period or overtime. John Kelly said she is the most determined athlete he’s ever coached.

John Kelly said she’s also learned how to overcome obstacles, and he said from an early age she’s always had a great personality.

“When she was about 2 years old she had a Barbie jeep,” John Kelly said. “And she had run into a tree, of all things, and couldn’t get around it. And the boys were blocking her so what she did was she went over the curb instead — that’s Jamie. That’s what she does, she finds the way out. It can be the toughest way. But she finds a way out and then she celebrates it. As tough as she is on herself and pressure she also has fun. She laughs a lot. She’s everyone’s favorite person to be around, and that’s her mom’s influence on her as well, I think.”

Jamie Kelly started her high school career at Warren County, where her dad was then the boys basketball coach.

She had two solid seasons for the Wildcats and she said she learned a lot from some of the coaches there — Randy Bush and current head coach Tony Clark.

“Coach Clark, he’s coached me since seventh-grade basketball,” Jamie Kelly said. “He was one of my favorite teachers growing up. He has been another father figure in my life. He’s one of the best coaches I’ve ever had. Coach Bush, he pushed me to be the best player. He treated me like I was a senior when I was a freshman. He set high expectations for me.”

In October of her sophomore season, Jamie Kelly lost one of her best friends — Skyline freshman Brody Michael — who died at age 14.

Jamie Kelly said Michael’s mom will be walking out with her on her senior night on Friday.

In between her sophomore and junior seasons, John Kelly moved to another part of Front Royal after he had stepped down as Warren County boys basketball coach. Jamie Kelly transferred from Warren County to Skyline.

“It was tough, only because of some of the girls I was leaving behind,” Jamie Kelly said. “I feel like I lost a couple friendships. My stepsister is over there still. But coming over here I just feel like I had a brand-new start. Even when I came over here, just a couple miles down the road it still felt like I was starting new with everyone, and I had to earn my spot.”

Jamie Kelly said she knew some of the athletes, because she had played with some of them in travel softball and basketball.

One player she hadn’t played with was Skyline 2022 graduate Jillian Shannon. Last season, Jamie Kelly and Shannon were a strong duo on the basketball court.

“I finally got to play with Jillian Shannon,” Jamie Kelly said. “We had never played before, but it just felt like we had played together our whole lives. We had that type of connection.”

John Kelly had coached both David and Michael Kelly, but had never coached Jamie before.

“It’s definitely new,” Jamie Kelly said of having her dad as coach. “I knew that my dad was going to have high expectations for me. I barely come out of the game as it is because he knows that he can push me because it’s my dad. He’s pushed me a lot this year, and honestly made me so much better in practices.”

“It’s nice because you get the chance to have a break from things too,” John Kelly said. “And then all of the sudden she’ll come home and talk about school and about where she’s going and stuff like that. She’s able to separate that. As good as an athlete as she is — and I think she’s one of the best all around athletes in this area — she has the ability to separate that competitiveness of sports from her every day life.”

On the court, Jamie Kelly is having another standout season. Jamie Kelly is averaging 15.9 points, 8.4 rebounds, 3.4 assists and 2.4 steals per game.

John Kelly said Jamie’s versatility on the court is one of the things that makes her a special player. She can play inside the paint or outside.

“She’s not one-dimensional,” John Kelly said. “She does everything well. She’s picked her defense up a lot this year, too. That was one thing I used to harp on her when she was a child about ‘you have to play defense, too’ — and she does do that. And she’s strong, physically strong. That definitely has helped her not only in basketball, but all of her sports.”

Jamie Kelly said she loves all three of her sports — volleyball, basketball and softball — equally. Jamie Kelly has signed to play softball at Potomac State College, a junior college in Keyser, West Virginia. She said she hopes to be there for only a year or two and then transfer to play softball at a Division I university. She will be joined at Potomac State by basketball and softball teammate Kiley McGuire.

Jamie Kelly said she is glad to have McGuire with her at Potomac State because they have been playing softball together since they were little.

This week Jamie Kelly will likely score her 1,000th point. She enters the week needing just 33 points to reach the milestone.

Jamie Kelly said she believes the Hawks (5-9, 1-2 Class 3 Northwestern) can still have a strong season, after playing really good competition in the non-district part of their schedule.

Jamie Kelly said she also enjoys being a leader and trying to help some of the younger players out.

With basketball season more than halfway through, Jamie Kelly said it’s sinking in that her basketball career is almost over.

“My dad talked to us in practice the other day about senior day and I cried,” Jamie Kelly said. “I was like no way I’m actually a senior. It really has gone by way too fast. ...I love all my sports. But I feel like this season’s going to hurt the most, because I know it’s my last time ever playing basketball.”