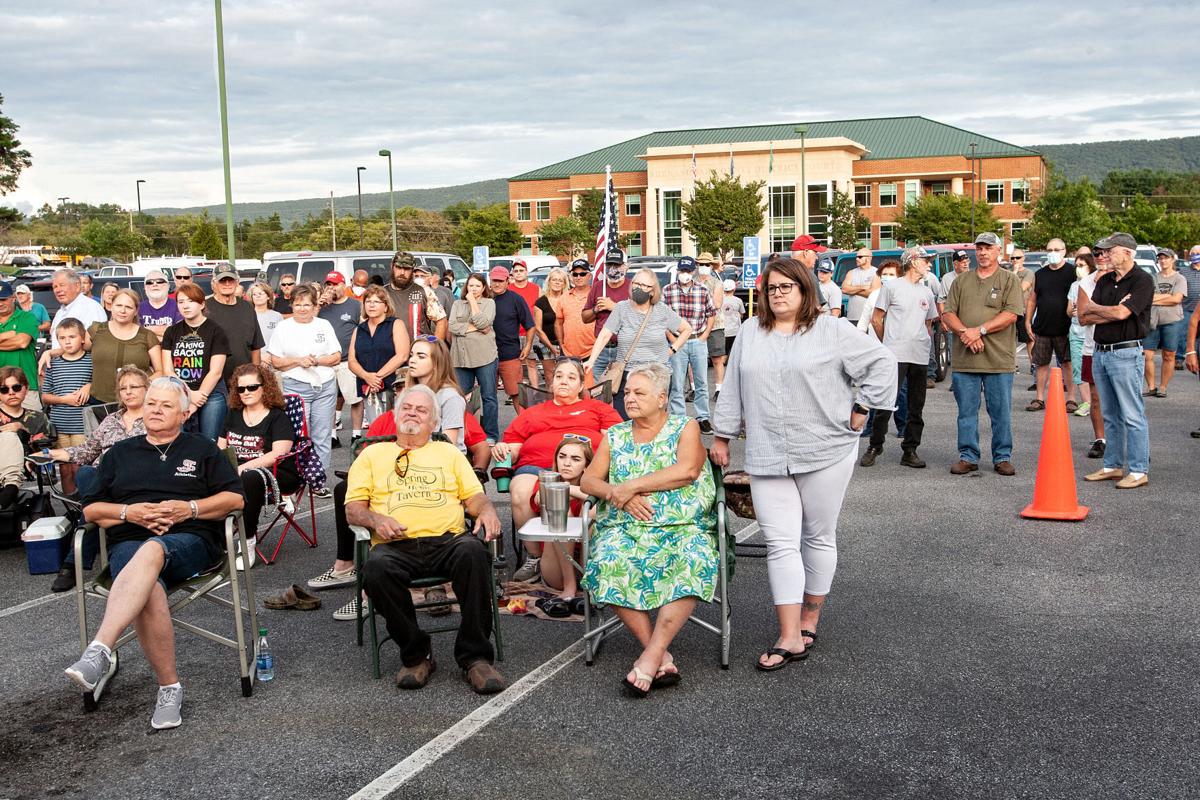 A crowd of protesters fill the parking lot of the Shenandoah County Government Center in Woodstock on Thursday during the School Board meeting. 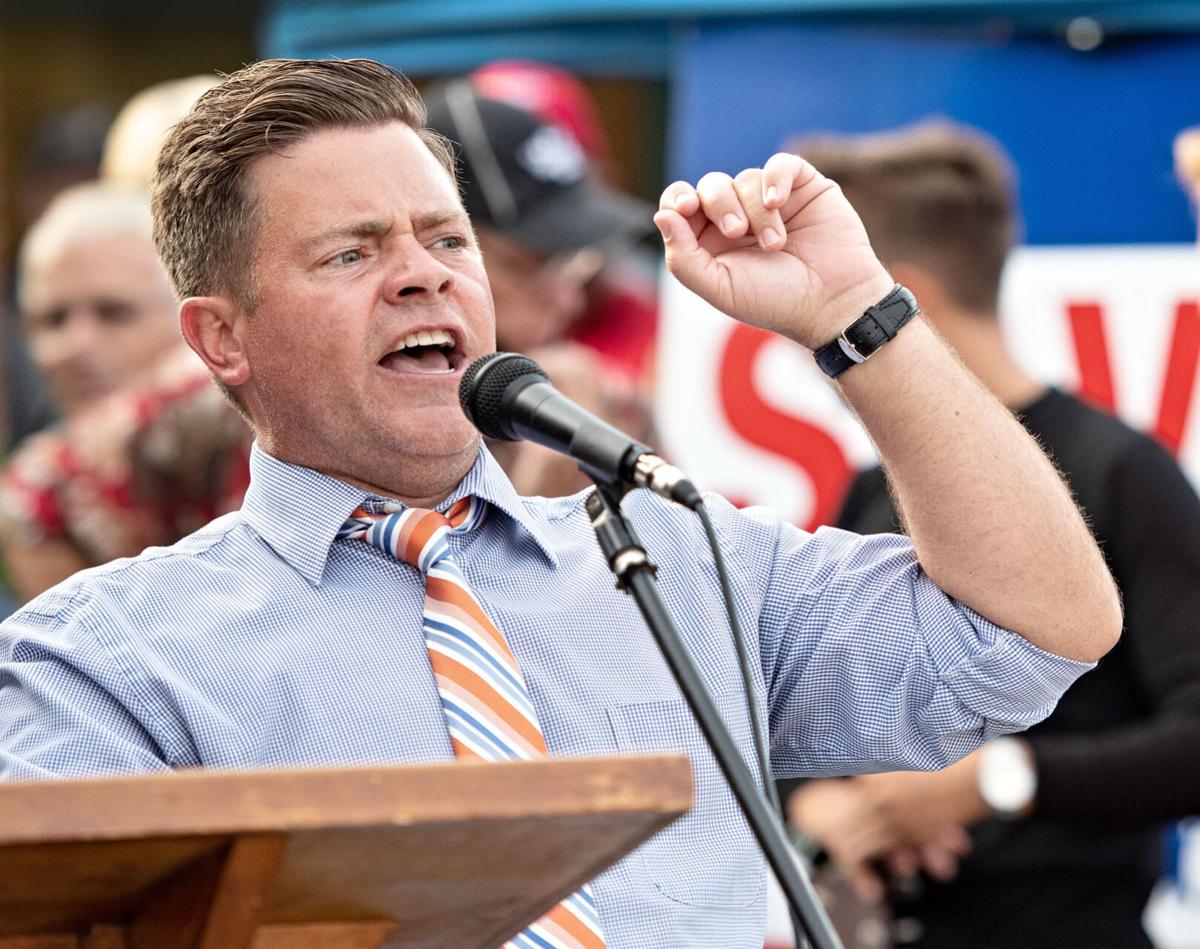 Keven Walker, CEO of the Shenandoah Valley Battlefields Foundation, speaks to the protesters. 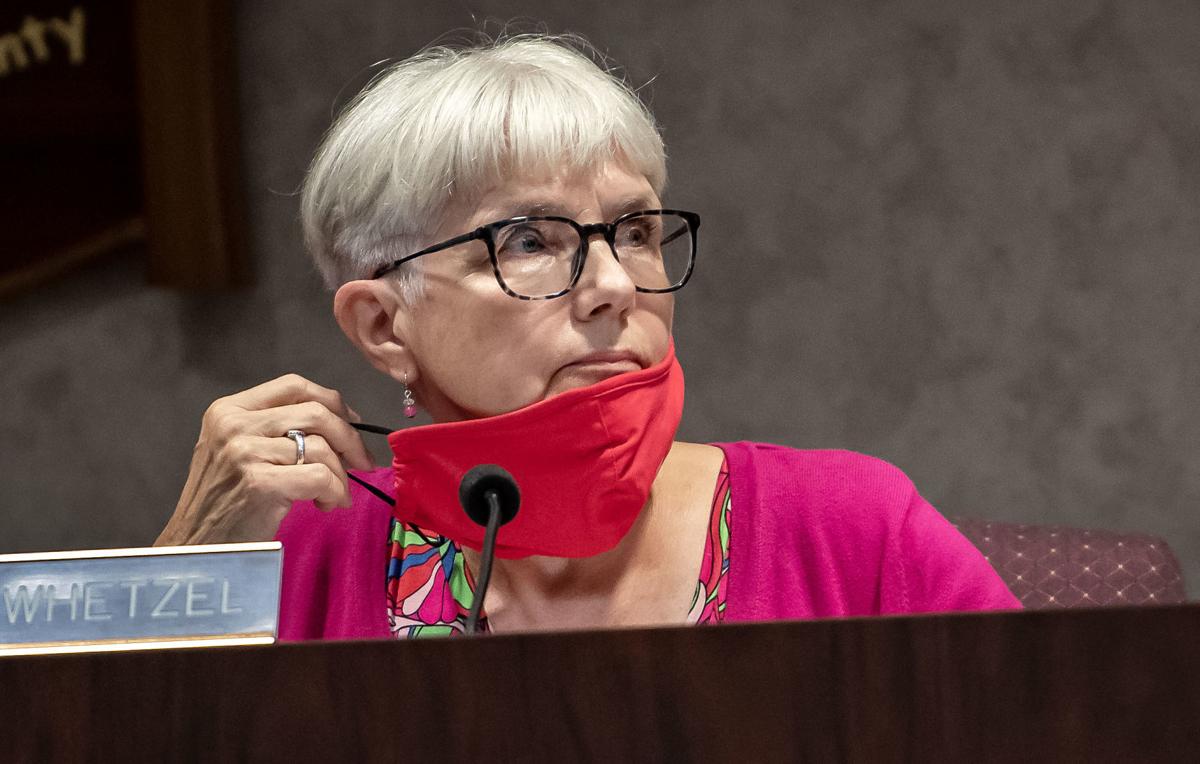 Shenandoah County School Board Chairman Karen Whetzel addresses one of the speakers during the public comment portion of the virtual School Board meeting held Thursday night. 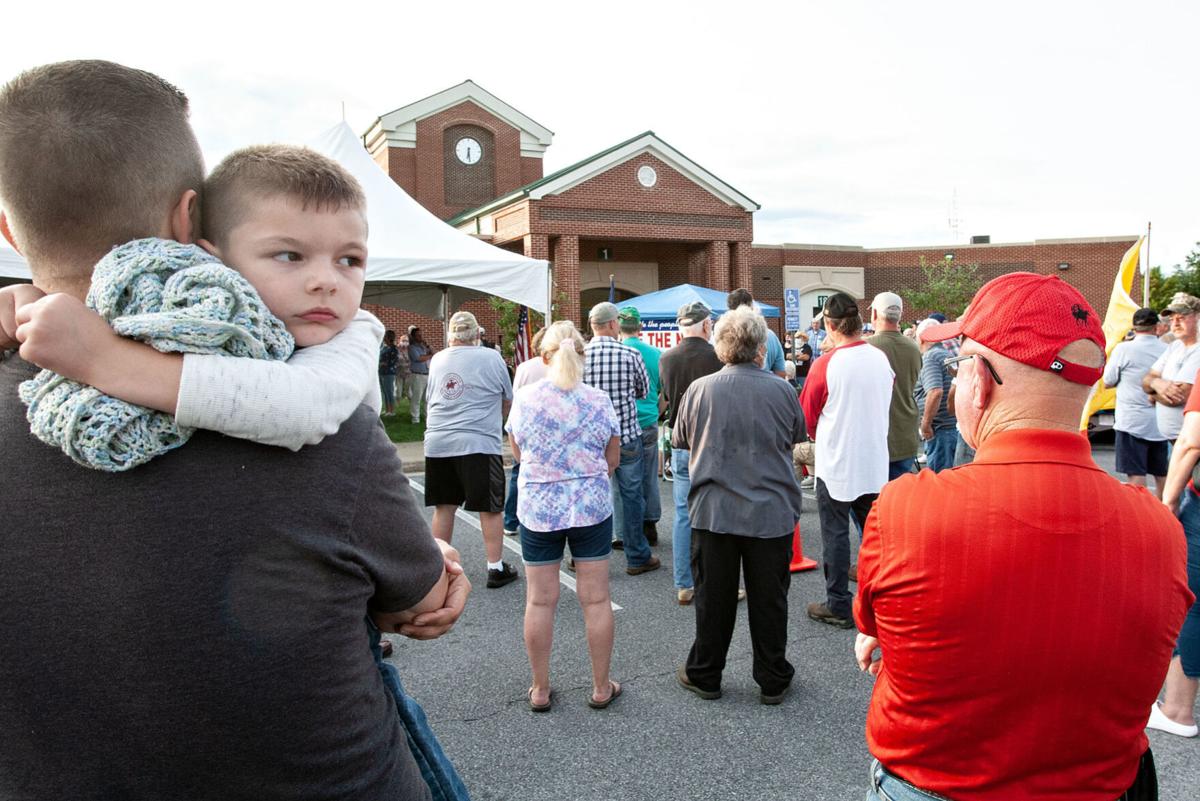 Corey Holsinger, of New Market, holds his son Kaden, 4, outside of the Government Center. 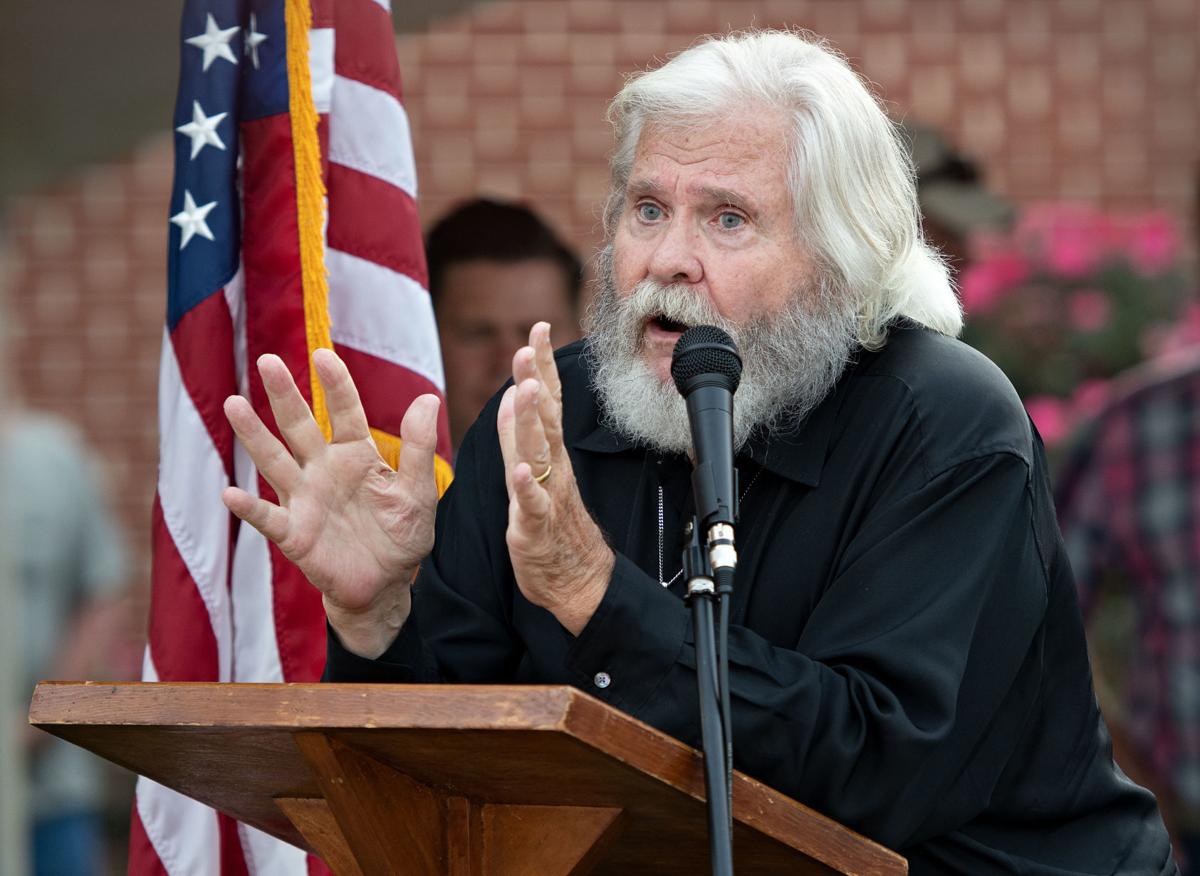 Ben Jones, known for his role as Cooter Davenport in the television show "Dukes of Hazard", speaks Thursday to a group of protesters who gathered outside of the Government Center where the School Board was meeting.

A crowd of protesters fill the parking lot of the Shenandoah County Government Center in Woodstock on Thursday during the School Board meeting.

Keven Walker, CEO of the Shenandoah Valley Battlefields Foundation, speaks to the protesters.

Shenandoah County School Board Chairman Karen Whetzel addresses one of the speakers during the public comment portion of the virtual School Board meeting held Thursday night.

Corey Holsinger, of New Market, holds his son Kaden, 4, outside of the Government Center.

Ben Jones, known for his role as Cooter Davenport in the television show "Dukes of Hazard", speaks Thursday to a group of protesters who gathered outside of the Government Center where the School Board was meeting.

WOODSTOCK – The Shenandoah County School Board on Thursday night approved the process of renaming two schools and a mascot at a third school.

On July 9, the School Board approved renaming Stonewall Jackson High School and Ashby Lee Elementary School and changing the mascot name of Rebels at North Fork Middle School due to a resolution members had passed condemning racism and affirming the division's commitment to an inclusive school environment for all.

In August, a draft of a plan was submitted detailing a timeline for the name changes and how things would be done.

On Thursday, Schools Superintendent Mark Johnston went over a few of the changes made to the plan. Most of the main changes to the draft were for North Fork Middle School. The committee that will help decide a new mascot for that school will now have four to six student ambassadors of varying grade levels and interests selected by the principal, as well as four staff members chosen by the principal and four citizen/parent representatives selected by the School Board.

An online form will be created for all three schools that will allow parents/citizens who wish to serve on the respective committees to submit their name along with a brief statement about why they want to serve. The School Board will then select members of each committee.

An online form also will be created that allows mascot suggestions for North Fork Middle School. That form launches today and will be open through Oct. 31. The middle school committee also will gather additional input from students, parents and the school community.

A survey of community members and students will be conducted to pare down the list of names to three. The student body will then vote on the three names and the winning mascot will be presented to the School Board for approval.

The new mascot name and the new names for the high school and elementary will not go into effect until July 1, 2021. The board also clarified that the mascot names at Stonewall Jackson and Ashby Lee could stay the same or they could be changed if it is felt there would be a better mascot name to go with the new school name.

All of the committees will be formed and then approved by the School Board at the Oct. 8 meeting.

In November, committees will meet and identify names for Stonewall Jackson High School and Ashby Lee Elementary School. The name recommendations will be presented to the School Board in December and a public hearing will be held in January, and then the School Board will vote on the names.

The class of 2022 may choose to have Stonewall Jackson or the new name for the school listed on their diplomas.

The funding for the changes will be considered as part of the School Board Fiscal Year 2022 budget process.

School Board member Michelle Manning said she has been looking into 501(c)(3) organizations to find out where they can go as far as establishing a repository account within a 501(c) (3) foundation, which would allow private donations to be tax deductible. She said donors could choose to donate privately or donate as a business and use that as an advertising or marketing expense.

The board has estimated the change in names will cost about $500,000. The board also agreed that if they don't have the funds when they rename the schools, they could push the change back until they have the money.

Helsley, who voted against the renaming of the schools in July, said he knows they need to move forward with the plan but it won't be easy.

There were a couple of hundred people at a rally outside the School Board office on Thursday at the start of the meeting.

During the meeting, there were 10 public comments on the renaming of the schools. There were five speakers who were opposed and five who were for the name changes.

Charles Streett said renaming is not only about the schools but about the money it would take to change the names.

"This board has created exactly what it set out to prevent," Streett said. "This whole county is divided on this issue. Not only the name but the amount of money that will be spent to change the names. We do not know if this is going to be $500,000 or if it's going to be one million. Nobody knows the answer yet, they've only had projections. I feel that this money should be well spent on other things that is more useful in this county."

Sarah Kohrs, a Stonewall Jackson graduate, said she feels it is time for the schools to do what's right and change the names.

"This is a difficult topic because six decades of graduates have memories at these schools," Kohrs said. "I recognize the confusion and uncertainty that change brings. However, change that is chosen to increase inclusion, undo injustices and create peaceful connections of community members with different cultural backgrounds brings something else too – and that is hope. I want to bring attention to specific parts of the process for the renaming. ...This process encourages the participation of current students, parents and community members. These aspects of the process reveal compromise, collaboration and an attitude of community healing. This plan is an example of the important work we still need to do in addressing the harms that occur when a community fails to truly see the humanity that's walking around in someone else's shoes. I say this because that failure is exactly what happened in January of 1959 when a high school built to serve solely white race was named Stonewall Jackson. That failure led to 60 years worth of students emotionally scarred because they had no choice but to attend public schools named after Confederate leaders. ...Yes, change can lead to hope."

In opening remarks at the beginning of the meeting, School Board Chairman Karen Whetzel said that the renaming of the schools has been approved and the focus should now be on the process of how to make that happen.

"While the focus for some may still be on whether or not to retire the names and mascot, for others, the conversation has shifted to personal attacks on board members and the superintendent," Whetzel said. "Some of our staff members have also felt intimidated. Threats of violence, intimidation and related misconduct is not appropriate and will not be ignored. This response surely is not the example that should be set for our young, impressionable students, some of whom have also shared their perspective with us.

"One of our strengths as a board and as a community is that we share a common goal: we all want what is best for our students. The decision to retire the names of these schools and the mascot was a decision made in the best interest of all of our students, not just some. If you disagree with the board's decision, I encourage you to reconsider any action that would be detrimental to the support and success of our students."