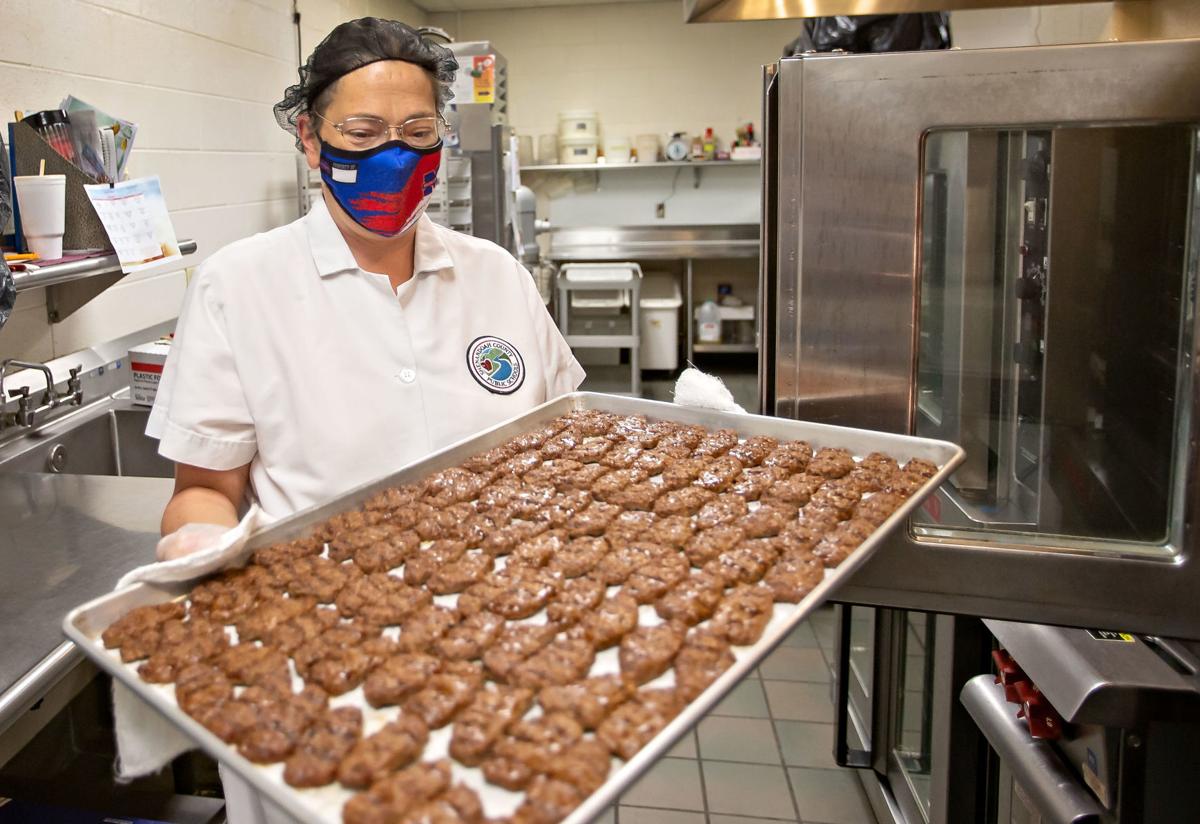 Tammy Polk, a food service employee at Peter Muhlenberg Middle School, takes out a tray of beef teriyaki bites that will serve as lunch for summer school and daycare students. Shenandoah County Public Schools recently announced the school’s cafeteria staff as the school system’s team of the year. 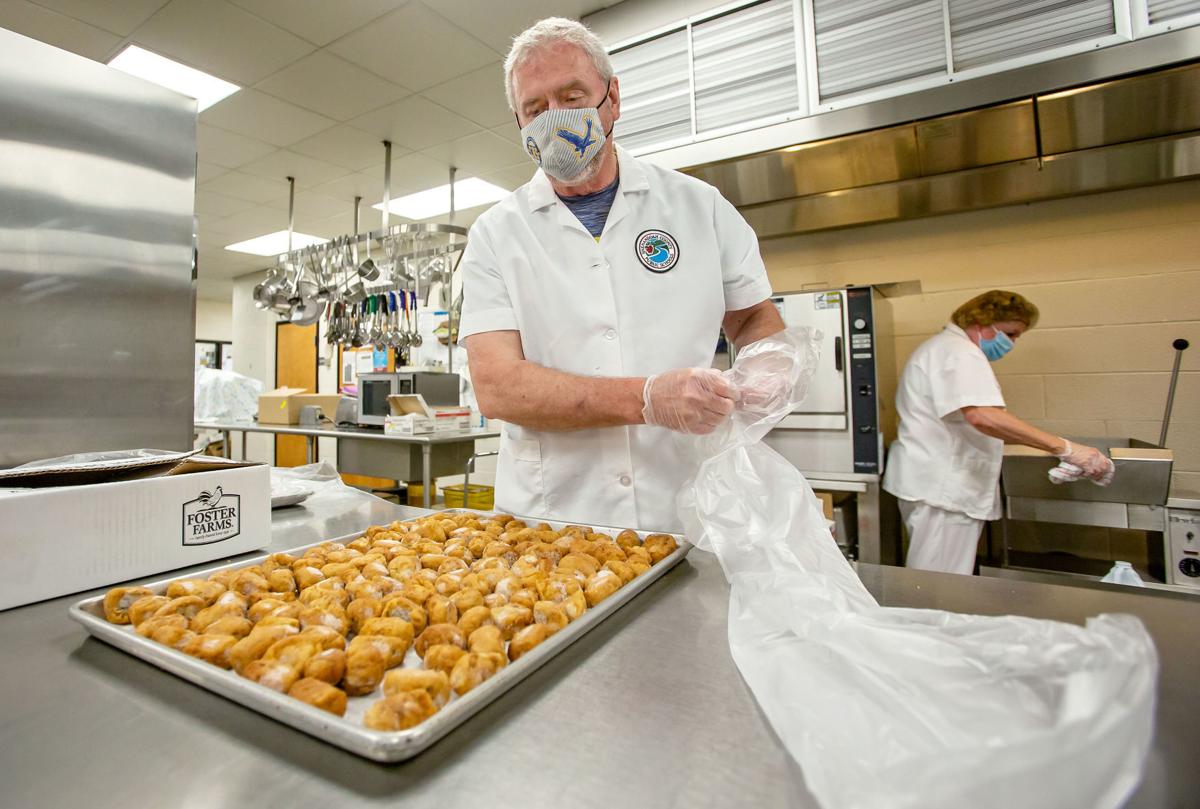 Tammy Polk, a food service employee at Peter Muhlenberg Middle School, takes out a tray of beef teriyaki bites that will serve as lunch for summer school and daycare students. Shenandoah County Public Schools recently announced the school’s cafeteria staff as the school system’s team of the year.

WOODSTOCK — The past year has been difficult for everyone involved in public schools, and cafeteria workers have been no exception.

A year ago when schools were shut down, the Shenandoah County Food Service Department continued to work as hard as ever. They delivered over 70,000 meals last summer. The meals were prepared at each of the middle schools, and the food could be picked up at the back door or they were loaded onto buses that drove around to different areas for people to pick them up.

“Rough,” Peter Muhlenberg Middle School Cafeteria manager Judy Taylor said of what last summer was like. “It was very challenging trying to figure out how much food to fix, because we had no numbers of how many people we would be serving because they just came to the back door.”

Shenandoah County Public Schools Food Service Supervisor Beverly Polk said some people ordered online, but then others did not, which made it challenging to know how much food they would need each day.

Taylor said they never ran out of food and they adjusted as the summer went along.

“Once we got the feel of it, we tried to play it by ear,” Taylor said. “And then if we started looking like we were going to run out we would go ahead and jump on it and get something done before we ran out.”

Last week was the first week of summer school in Shenandoah County. The summer program from last year is also going on again this year for children who need it. Central High School cafeteria worker Cindy Sager, who helped with the summer program last year as well as this year, said this summer will be much smoother for everyone.

“What we went through last summer is helping us this summer,” Sager said. “So we know what we’re doing.”

Sager, who has just completed her fourth year with the schools, said it’s been a tough year, but there have been positives.

“It’s been challenging and rewarding at the same time,” Sager said. “Trying to deal with the COVID and the masks and the social distancing and all that. But at the same time it’s rewarding to see the kids and making sure they’re getting a good hot meal and feeding them.”

“My hats go off to Miss Polk and these ladies,” Minton said. “They have all been extremely wonderful. They get it all done.”

Tammy Polk just completed her first year as a cafeteria worker at Peter Muhlenberg and said it was certainly more than she expected. She said it does help that they have each other to talk to and go through it with together.

“We lean on each other, we yell at each other,” Tammy Polk said with a laugh. “We’re one big happy family. We work together to get it done.”

The students started to come back in October for at least one day a week, and eventually in March they were allowed to be there for four days a week. Taylor said things also got better once the kids didn’t have to social distance as much and more were allowed in the cafeteria at a time.

“We were serving like five lunch meals a day,” Taylor said. “And then when they finally started letting the kids come back it got knocked it down to three, which made it a whole lot better.”

Taylor, who has been with food service for the last 21 years, said it was great to be able to see the students again and the students seemed happy to see them as well.

“It really made you feel good, especially when we got cards,” she said. “They would make up cards thanking us and things like that. It was nice. It made me feel good.”

Beverly Polk said if there’s one word that they’ve had to learn over the past year it’s patience.

Taylor said it was a nice honor, but the award should be for all of the cafeteria workers at all of the schools.

“It made us feel good,” Taylor said. “But I feel that some of the others have to be part of it too, because Cindy was with us all summer last year and a couple of the others. It’s a team effort for food service, not just for one group, but for everybody.”

Beverly Polk said she was proud of her entire staff for the work they did this past year. She has been in food service with the school division for 56 years. She said what keeps her going is how much she loves her job.

“I enjoy the staff,” Beverly Polk said. “They work well with me. I could not do it if I did not have the staff I have. To me they’re like family. And I feel that every day we work, those of us in food service, we’re helping someone. Sometimes we may think we are not appreciated, but in the long run we are — we’re appreciated.”

Beverly Polk said that while the last year has been difficult, knowing that they were helping families made it worthwhile.

“I think what made me feel best was one day when I came out across the loading dock,” Beverly Polk said. “and some lady, I had no idea who she was, said ‘Miss Polk, if it wouldn’t have been for what you did I don’t know how I would have fed my children this summer.’ That’s a good feeling.”

And I feel that every day we work, those of us in food service, we're helping someone. Sometimes we may think we are not appreciated, but in the long run we are — we're appreciated.