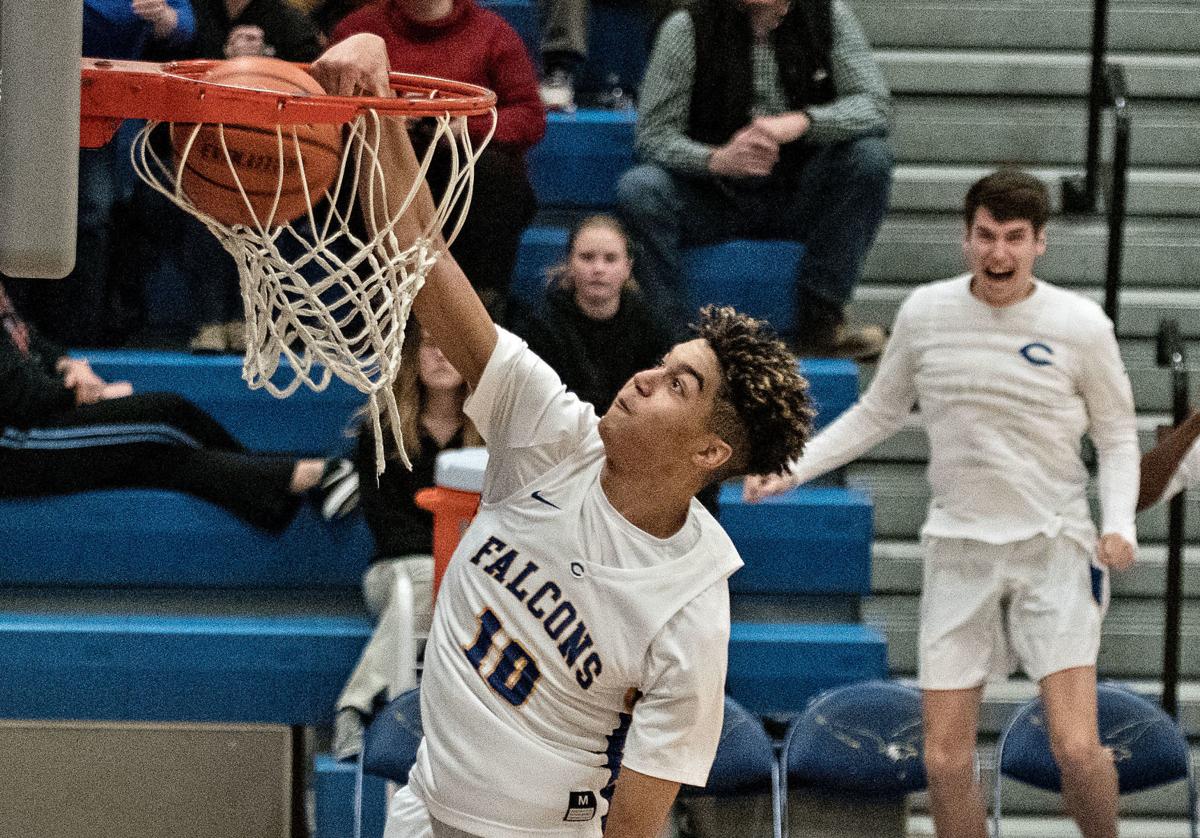 Central’s Dominic Strother goes up for a dunk after a fourth-quarter steal during Thursday night’s game against Manassas Park in Woodstock. 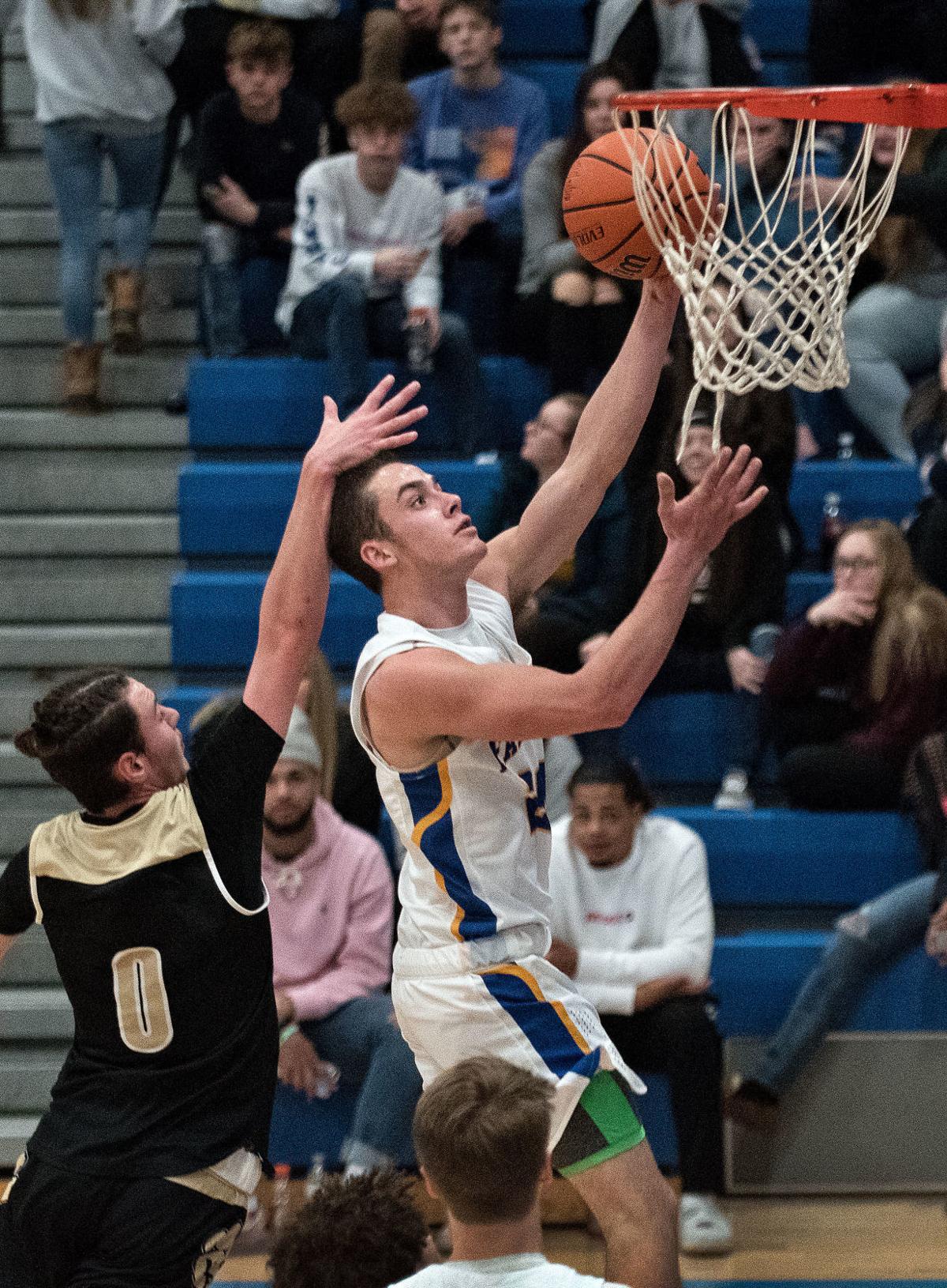 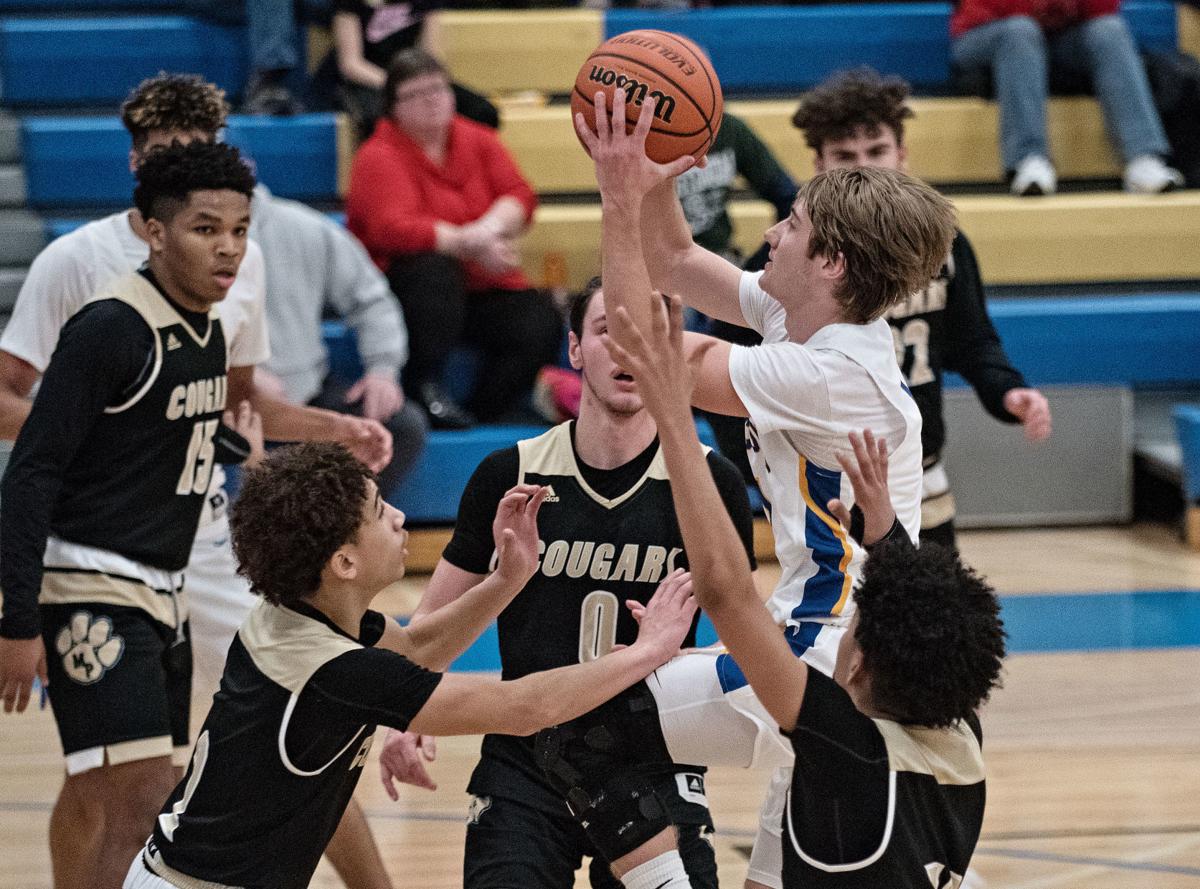 Central’s Dylan Hamrick drives inside as a host of Manassas Park defenders look on during Thursday night’s game in Woodstock. 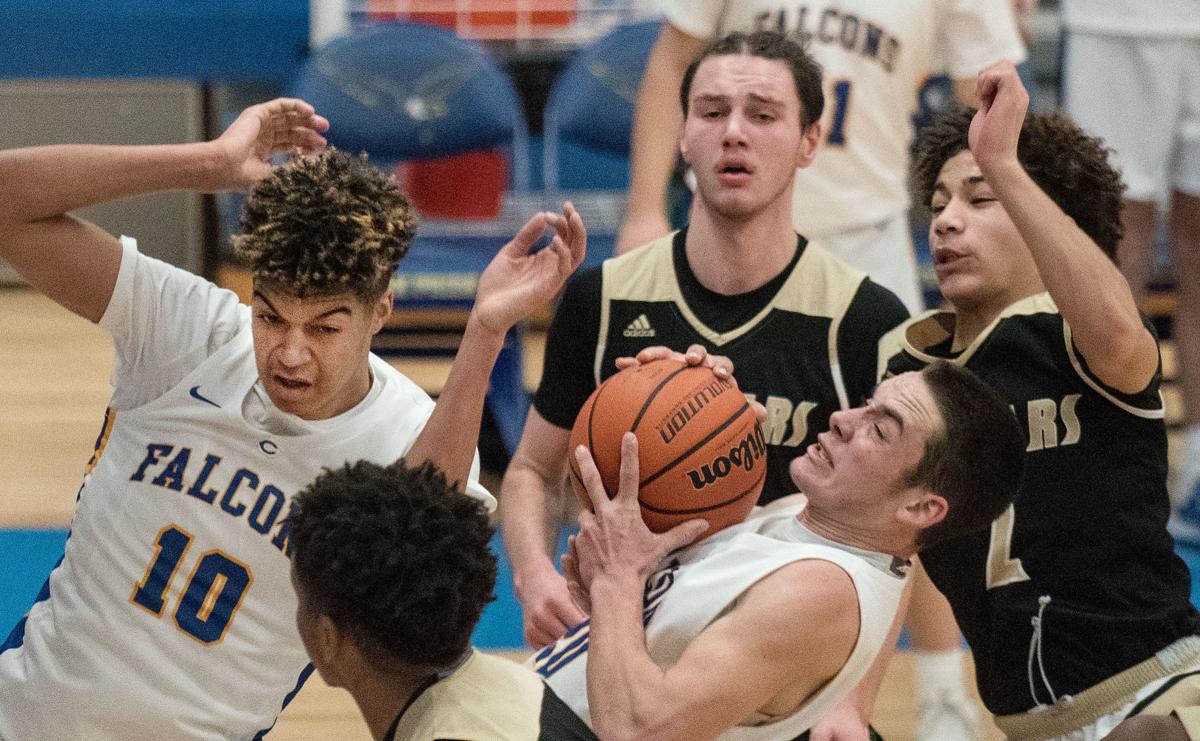 Central’s Alex Neff puts on the brakes as he is surrounded by teammate Dominic Strother, left, and Manassas Park’s Brysen Boots, center, and Payton Simmons, right. 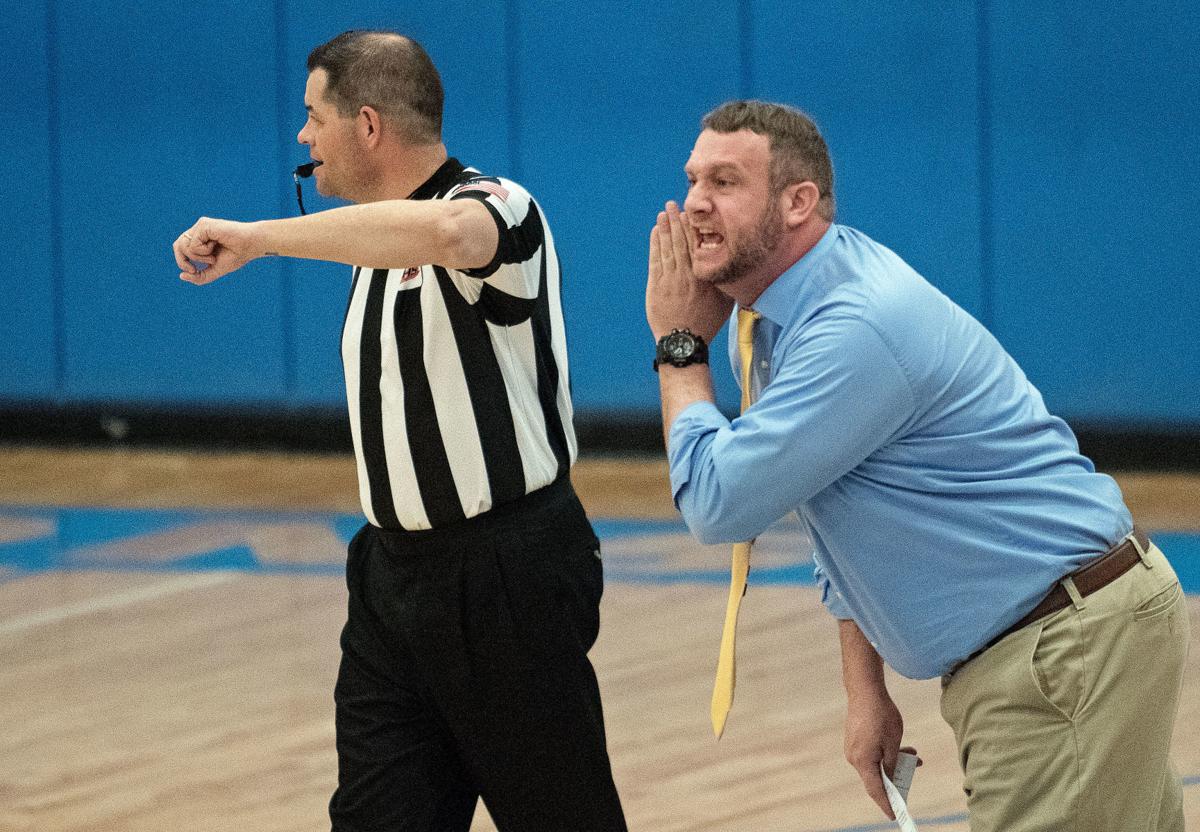 Central’s Dominic Strother goes up for a dunk after a fourth-quarter steal during Thursday night’s game against Manassas Park in Woodstock.

Central’s Dylan Hamrick drives inside as a host of Manassas Park defenders look on during Thursday night’s game in Woodstock.

Central’s Alex Neff puts on the brakes as he is surrounded by teammate Dominic Strother, left, and Manassas Park’s Brysen Boots, center, and Payton Simmons, right.

The Falcons had their chances to end it that way – they took a lead of at least 10 points five different times throughout the contest, including a 13-point advantage with 6:34 to play – and instead had to hang on for a 65-62 win in their district opener.

But a win is a win, and though the Cougars insisted on making Central uncomfortable in the late stages Thursday night, the Falcons found a way to win yet another close game, and it could be an experience that Central – which carried an unblemished 8-0 record into Friday’s district matchup at Warren County – can learn from and use to its advantage as the season progresses.

“As the season continues to go we’ve got to be able to just pick up on those situations where we’re up 10 and we’ve just got to keep on piling it on so they don’t come back,” Falcons senior guard Dylan Hamrick said after Thursday’s win. “But I’m proud of the guys for when adversity came, we fought through the adversity and we were able to come up with the win.

Through the first half of the season, the Falcons have shown they’re capable of winning games in a variety of ways. Five of Central’s first eight wins were decided by 12 points or more – three of them by 26 or more – and the other three were decided by 3 points, including a pair victories over Class 4 district member Sherando.

“We’ve had a little trouble closing some teams out but give (Manassas Park) some credit because they’re scrappy and made some plays down the stretch,” Central head coach Jeff Whittle said. “But also credit to our guys for keeping our composure and making some plays down the stretch to hold them off. We’ve worked on some things at practices with situations and stuff like that and we need to continue to do that.”

Central led for 30 of the game’s 32 minutes against the Cougars and threatened one final time to run away from Manassas Park when a loose ball at midcourt led to Dominic Strother’s one-handed slam in transition and a 56-43 lead with 6:34 left in the game.

But the Falcons then got sloppy – four turnovers contributed to an 11-2 Manassas Park run that pulled the Cougars within 58-54 with 3:15 left – and the Cougars nailed some clutch 3-pointers to stay within striking distance until the very end when Brysen Boots’ heavily contested trey from the wing found nothing but air at the buzzer.

Central finished the game with 15 turnovers, including those four in the fourth period that came during a span of 2:45.

“I think we were just a little too excited, and I didn’t handle the pressure well myself,” said Falcons’ senior swingman Alex Neff, who missed two free throws with 7.1 seconds left that could’ve taken the drama out of the Cougars’ last possession. “They were pressuring our guards so much we couldn’t even get them the ball, so I had to bring the ball down for the first time this year. I just tried to do my best. I had some dumb turnovers myself.”

But Neff also teamed with Strother to carry the Falcons offensively, much as they have done all season.

Strother, a 6-foot-8 mismatch for opposing defenses who entered Thursday averaging 21.8 points per game, had 24 points and 10 rebounds against Manassas Park – including 11 points in the third period – and Neff scored 21 points in the win, including eight of Central’s 16 fourth-quarter points.

Whittle said Neff, who entered Thursday averaging over 11 points per game, needed a couple of games to get reacclimated to the basketball court at the start of the season after playing football for the first time this past fall.

Whittle added that Central’s offense, which has put a higher priority on taking advantage of its size and getting the ball inside this season, is starting to find its stride. Thursday’s game – in which Central shot 53 percent from the floor – was the third straight in which the Falcons have scored 65 or more points, and they’re averaging 61.4 points per game this season.

“The last two games we’ve finally picked up the intensity on both sides of the ball and we’re playing a lot better now that we’ve done that,” Neff said. “I think it’s gonna set the tone for the rest of the season.”

Central, like most teams around the valley, was set back in its schedule due to the midweek snowstorm that hit the area and is in the middle of a stretch that will see the Falcons play four games in four weekdays. In addition to Friday’s game against Warren County, Central travels to Luray on Monday before squaring off against Skyline at home on Tuesday in what figures to be a matchup between two of the top teams in Region 3B.

“All in all, we need to keep on getting better,” Hamrick said. “How we’re playing isn’t gonna cut it later on down the road, but undefeated is undefeated, and we’re just gonna keep on trying to get better.”