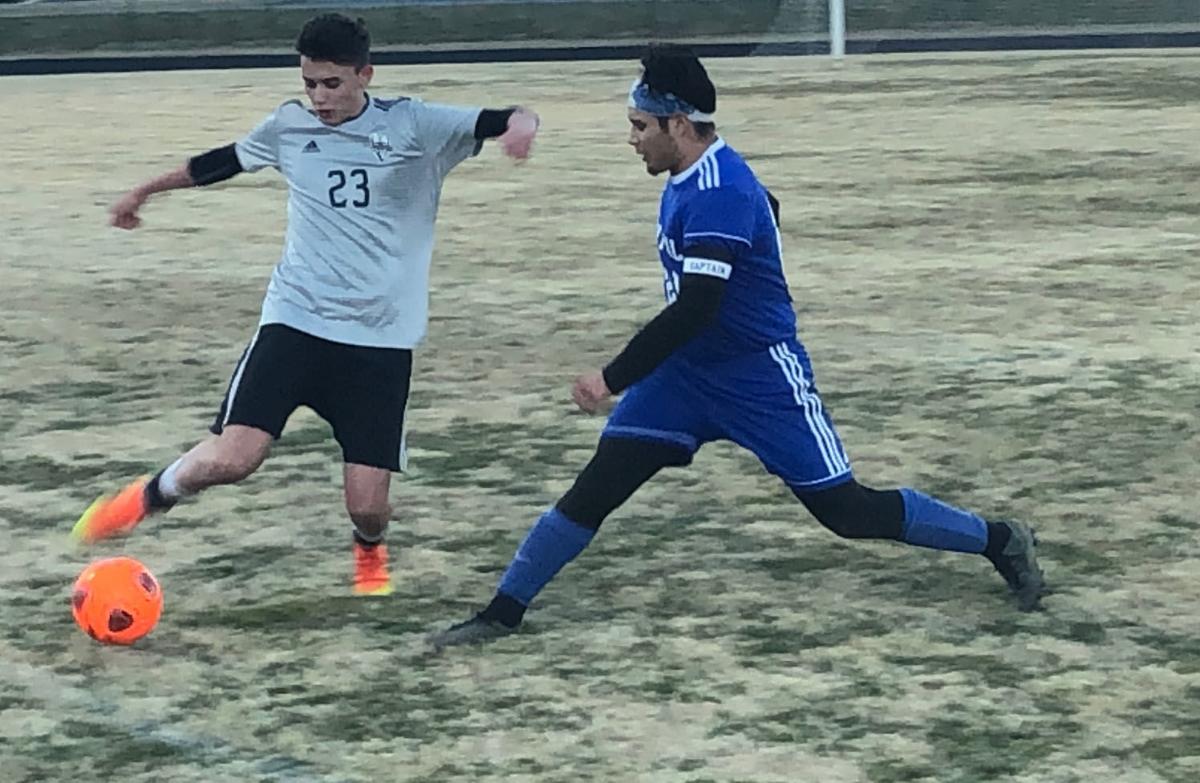 Central's Gerson Sorto Lopez, right, defends on a play during a game last season. Sorto Lopez is one of four Central seniors who made a big impact on the program. 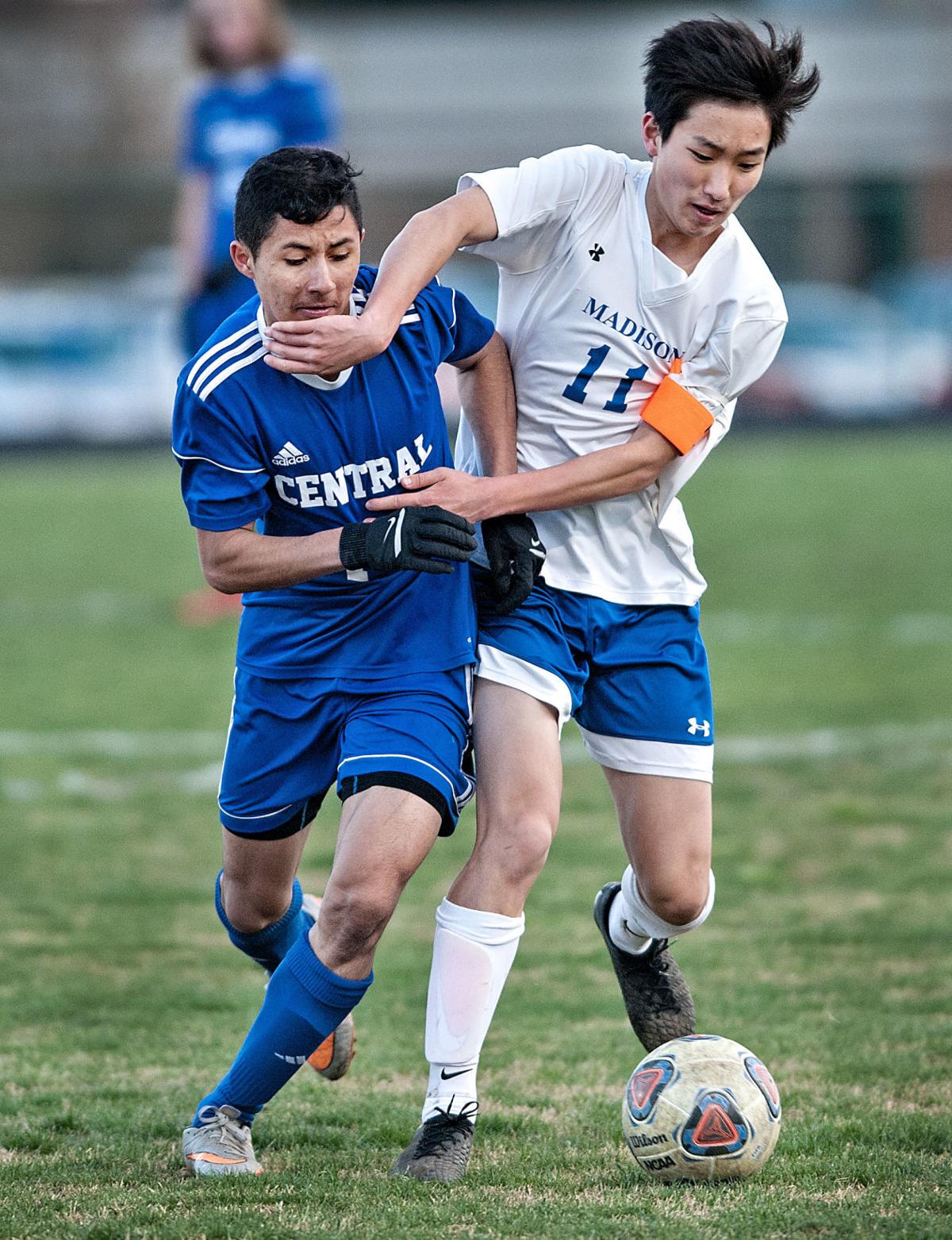 Central’s Jose Montoya Martinez, left, and Madison’s Joseph Chung battle for the ball during a game last season. Before the COVID-19 pandemic ended the season, Montoya Martinez was one of four seniors looking to lead the way for the team this year. 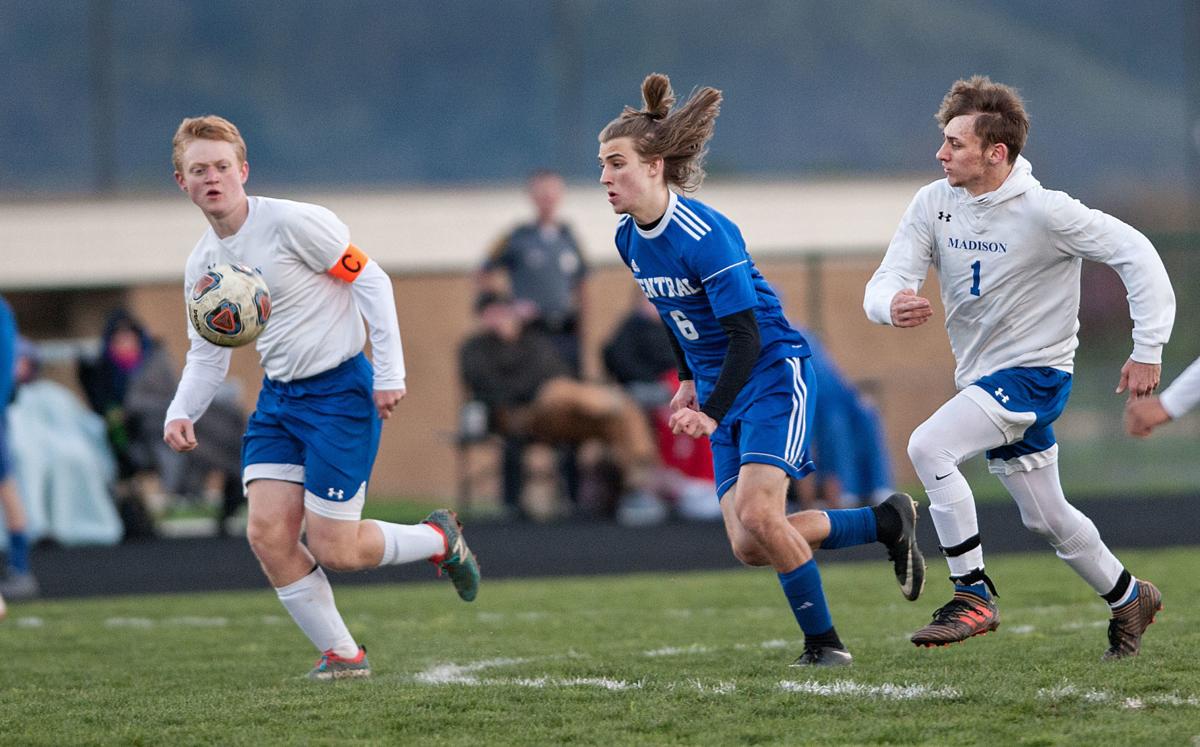 Central’s Landon Shockey gets into a foot race with Madison’s Noah McGhee, left, and Dylan Chiles, right during a game last season. Shockey was one of four Central seniors who were a key part of the team's success.

Central's Gerson Sorto Lopez, right, defends on a play during a game last season. Sorto Lopez is one of four Central seniors who made a big impact on the program.

Central’s Jose Montoya Martinez, left, and Madison’s Joseph Chung battle for the ball during a game last season. Before the COVID-19 pandemic ended the season, Montoya Martinez was one of four seniors looking to lead the way for the team this year.

Central’s Landon Shockey gets into a foot race with Madison’s Noah McGhee, left, and Dylan Chiles, right during a game last season. Shockey was one of four Central seniors who were a key part of the team's success.

Central's four seniors on the boys soccer team each played a special role in the success of the team the last few years.

First-year coach John Trelawney said that the quartet was a special group.

"Overall, I'm really going to miss this group of seniors," Trelawney said. "It being my first year in trying to build up the culture of the program I was really looking to lean on these guys, because they all bring incredible characteristics to the talent. I wish them all the best. The door is always going to be open for them to come back whenever it is that they are available or are wanting to come back. This would have been a special group of seniors."

Sorto Lopez was a standout on the field with his play and leadership. He was one of the top playmakers on the team, and also excelled at football where he played at fullback and linebacker.

Sorto Lopez said that while he enjoyed football, soccer was always his main sport.

"It was really fun," Sorto Lopez said. "I always had good buddies on the team and then friends that I would hang out with outside of school, too. So it was good just being around them. Then the coaching staff, too. They are friendly and all nice people."

He said that his top memory from playing was last year when the Falcons beat Shenandoah County rival Strasburg, 6-0. He said when the teams played earlier in the season he didn't get to play because of injury. But he came back from injury just in time to play against his big rival.

"It was a good feeling to come back and beat Strasburg in a way like that," Sorto Lopez said.

Sorto Lopez had five goals and two assists last year for Central despite missing part of the season due to injury.

Sorto Lopez can do a little bit of everything on the field, but he said his favorite part of the game is being aggressive.

"I learned to be patient with everyone around me,getting better just working as a team, building up," he said. "I just like being in attack and just causing problems for opponents' defense and goalies and all that. I like possessing the ball and it was just a good feeling having the ball at my feet."

Cardoso has been a standout defender for the Falcons for several years.

He said that the game of soccer has really helped him come into his own a little bit.

"I feel like it was a lot of fun for me," Cardoso said. "I've always kind of been a shy guy and it kind of helped me break out of that shell a little bit. I just made a lot of great friends and memories."

Cardoso was also a valuable member of the cross country team. He said soccer is his favorite sport and he's learned a lot from playing the game.

"I've been playing it since I was younger and it's just something that I enjoy doing," he said. "I've played with some of these kids since I was very young and it was fun to just be around them. I've learned to trust people because you have to put faith in people, and I've just learned that you can't do everything by yourself."

Shockey has been a big part of Central's success in both soccer and football. In boys soccer, He led the Falcons last season with eight goals and three assists.

Trelawney said that Shockey was a great role model for the other players.

"He really is kind of the model student-athlete, which is something that we as a program are looking to develop and have in our players," Trelawney said. "So what that means to us is he's a leader on the field. He's a leader in the classroom, and he's a leader around his school classmates and his community also. I think he really embodies that. He'd worked hard all throughout his high school career to reach where he's at today and accomplish what he's accomplished."

Montoya Martinez was coming off a strong season in which he had four goals and four assists.

"Jose Montoya Martinez -- I've never met him before this season -- but he's one of those people where he really kind of led them out on the field," Trelawney said. "He's incredibly driven to be the best player he can be and that shows, I think, whenever he touches the ball. A lot of the guys look to him in kind of tough situations on the field in terms of what to do next. He's a creative player. He was definitely going to be one of the difference-makers this year for us."

Central's season didn't get to happen due to the COVID-19 pandemic, but Trelawney said that the four seniors still made a big impact on the program, which will be felt for years to come.

Cardoso said that he's glad that he was able to be a part of the program.

"It's just been like a lot of fun because you make great connections with people," he said. "You're all there on the team, working hard together every day, and you make a lot of great bonds with people. Being there trying your hardest with them, encouraging one another. We're a family and it's great to be a part of it."