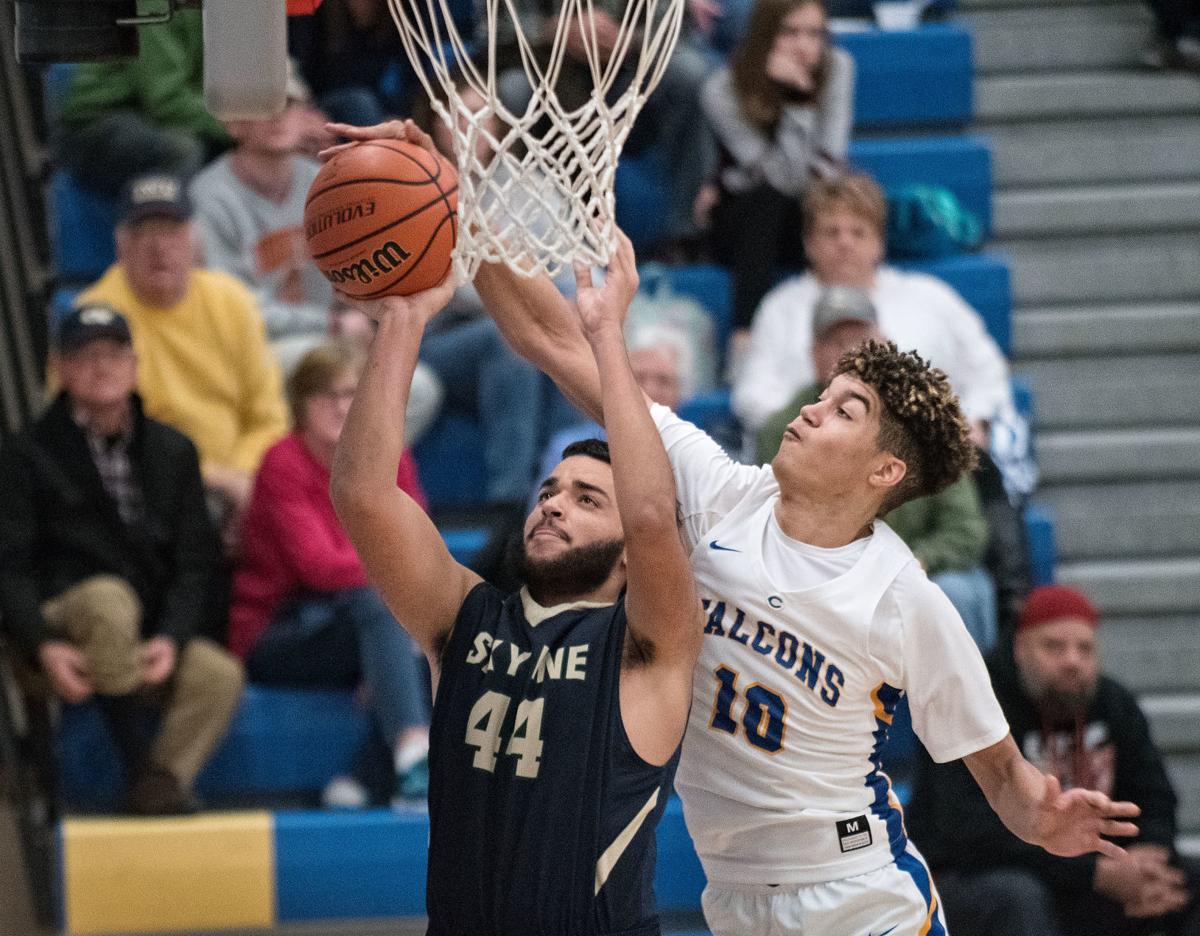 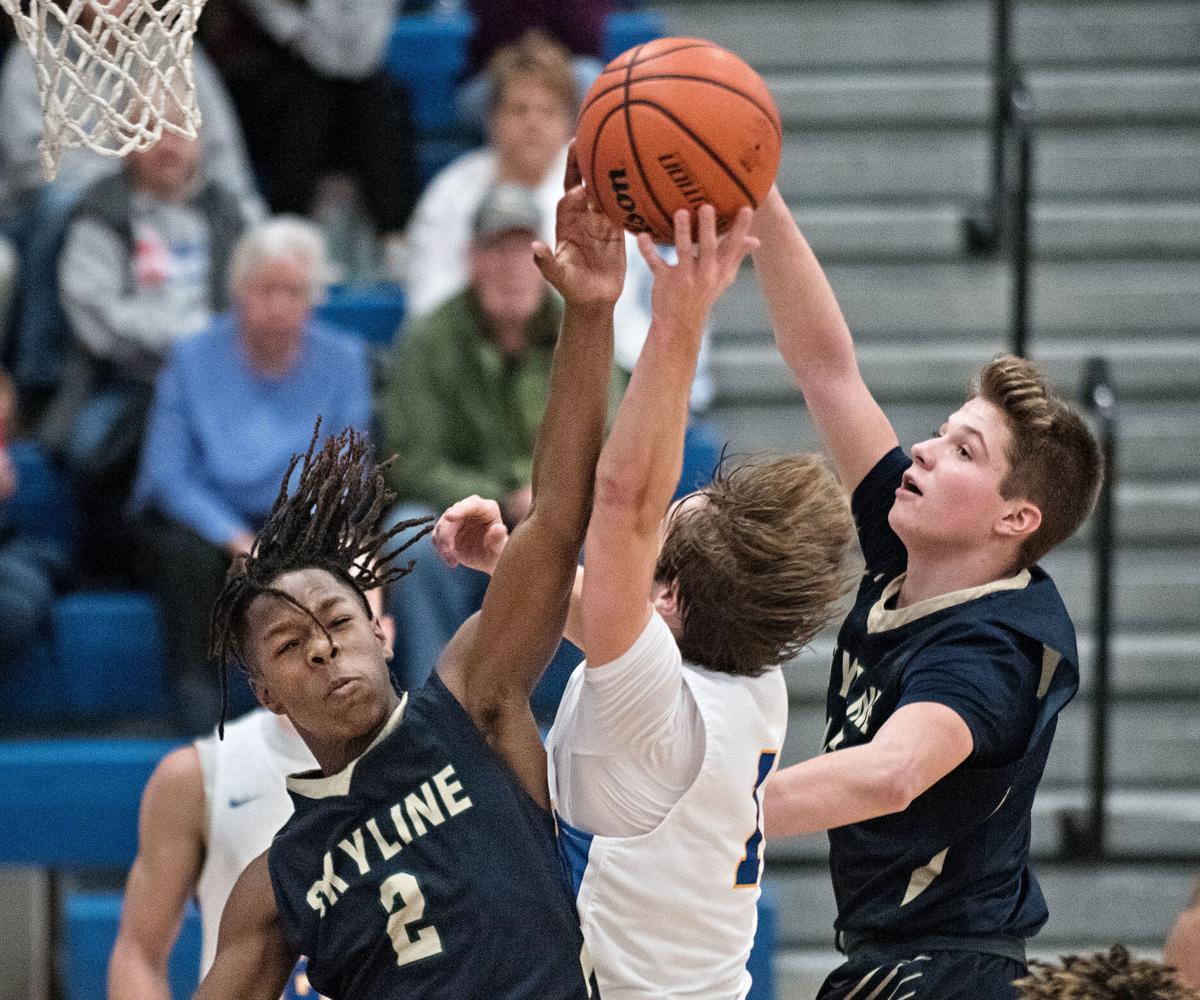 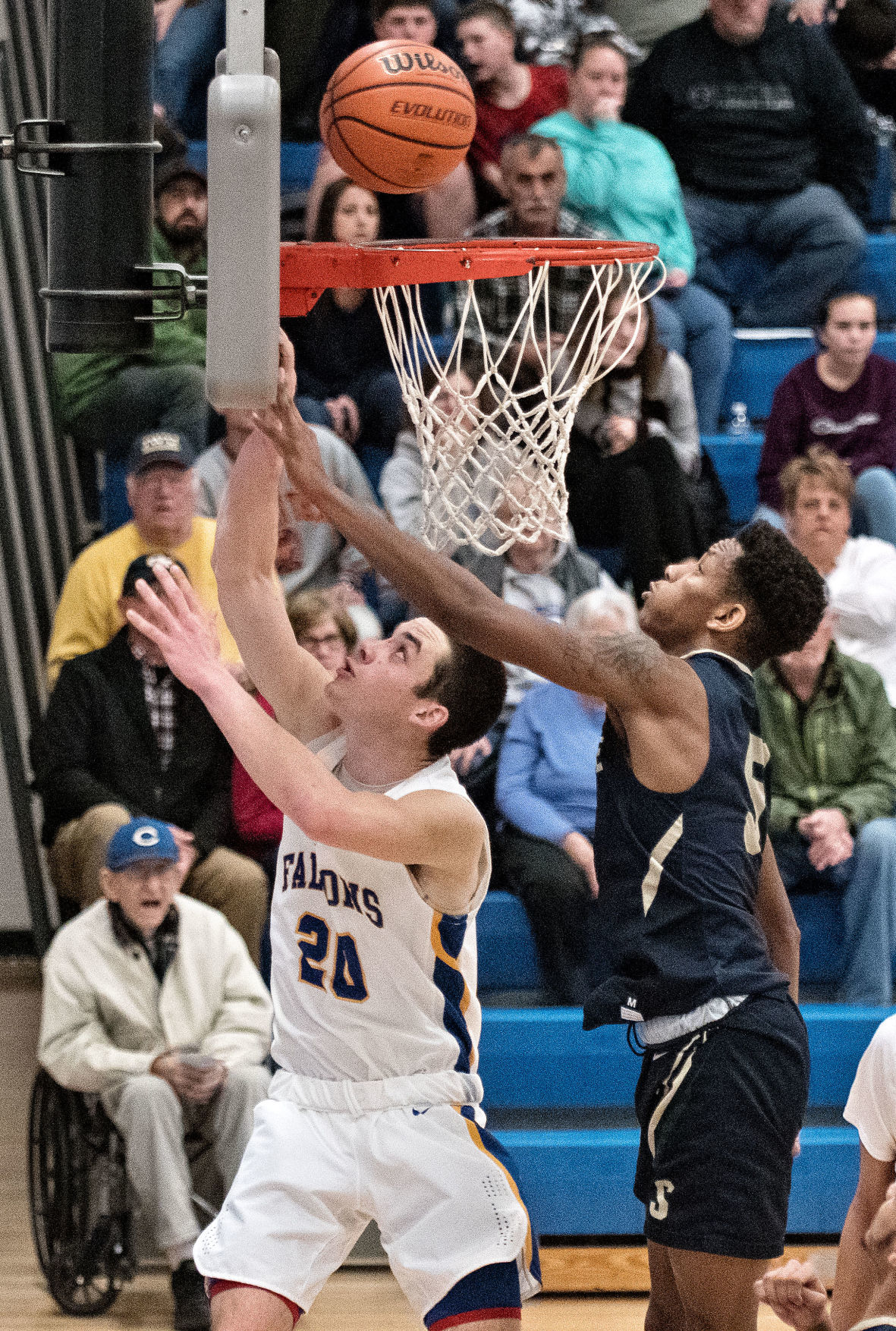 Central’s Alex Neff goes up to score under the basket as Skyline’s Marion Haley defends during basketball action Tuesday night in Woodstock. 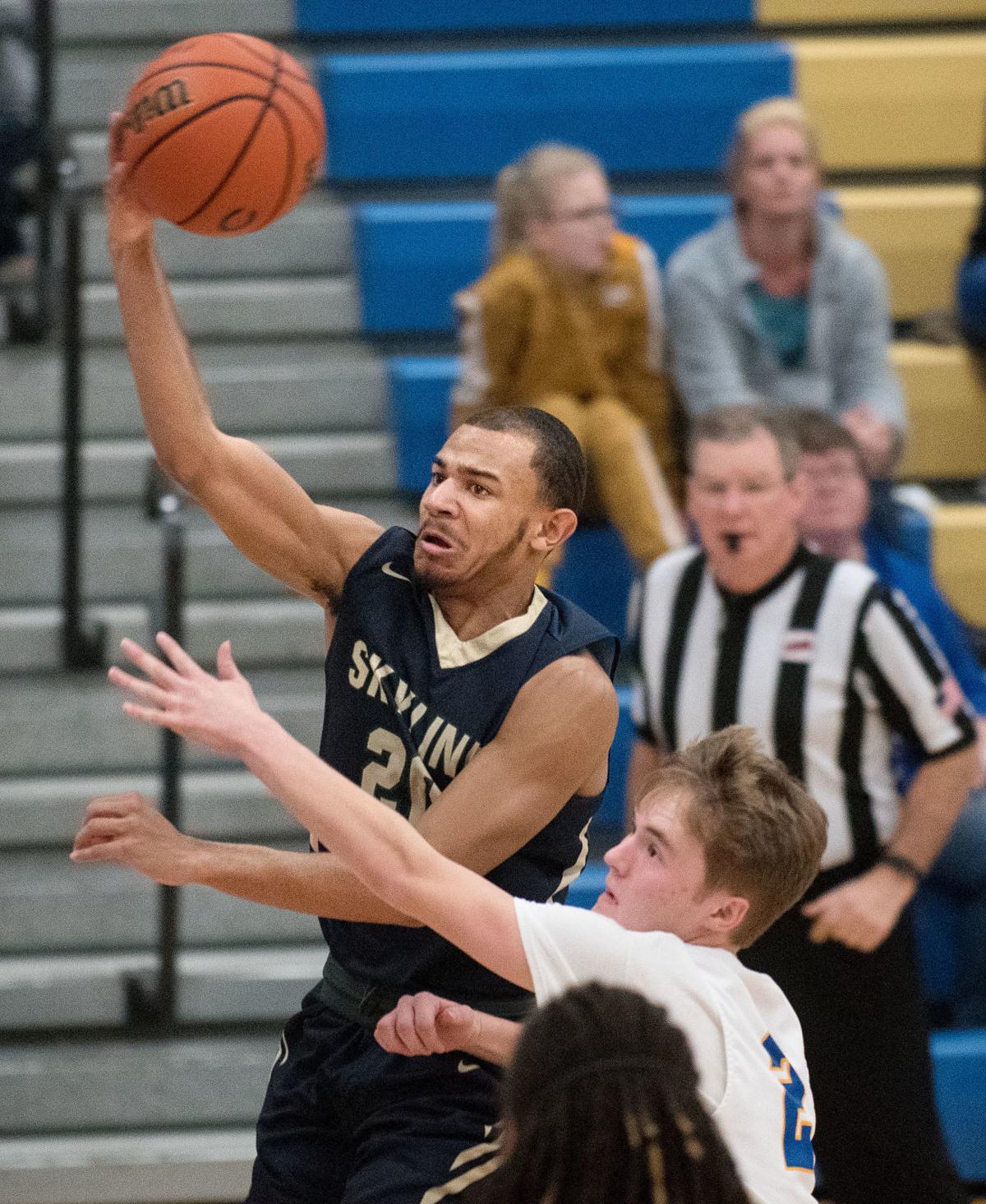 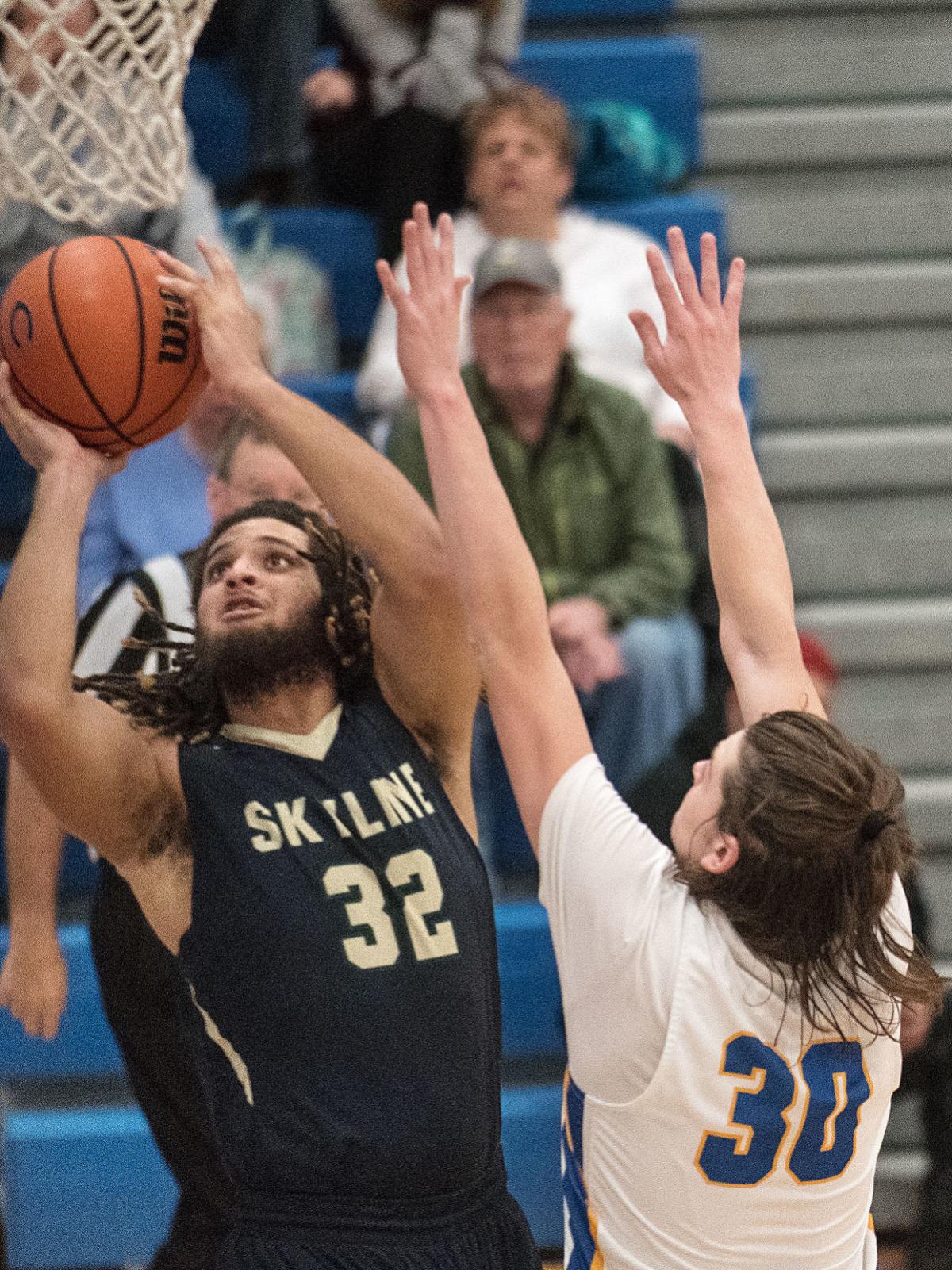 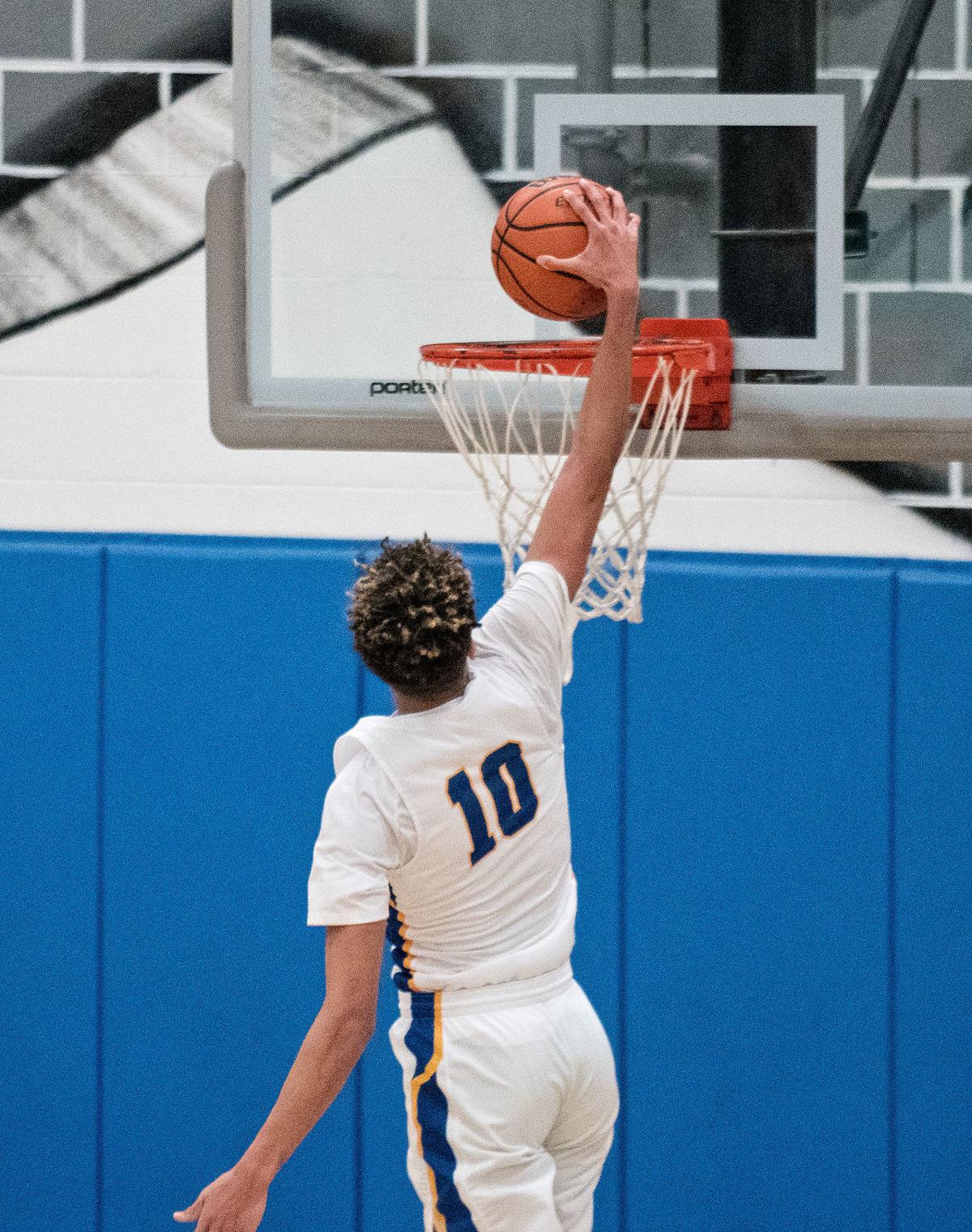 Central’s Alex Neff goes up to score under the basket as Skyline’s Marion Haley defends during basketball action Tuesday night in Woodstock.

WOODSTOCK -- Central’s boys basketball team added a statement win to its flawless start to the 2019-20 season.

The Falcons, hosting Skyline on Tuesday night in a clash of the top two teams in Region 3B, seized control of the Class 3 Northwestern District race with a 53-43 victory over a Hawks team that entered the contest having won five straight and ranked second behind Central in the last regional power-points standings on Friday.

It was the 11th straight victory to start the season for the Falcons, and it came in a game in which senior forward Kelan Hoover said Central had been looking forward to all season.

“I think it definitely showed everybody what we’re capable of,” said Hoover, who had 6 points and 12 rebounds in the win, which improved Central to 3-0 in the district. “Everybody thought we have a weak schedule, we’re not gonna play anybody. Skyline is a good team and it kind of showed everybody we’re gonna go somewhere. We’re gonna do what we can do, we’re gonna play our best basketball. That’s what Central basketball is.”

Central’s victory over the Hawks (9-3, 1-1 Northwestern District) was an even larger feat when you consider the circumstances. The Falcons were playing their fourth game in six days, were atrocious from the free-throw line outside of junior forward Dominic Strother and shot only 38 percent from the floor, and yet they still managed a double-digit victory over a team that figures to be on the short list of contenders in the district and region this season.

“They’re just a devoted group that comes ready to go,” Central coach Jeff Whittle said of the Falcons. “They never complained one bit about their legs or anything. They’re just laser-focused. We had a little shootaround even prior (to the game), after school, and their heads were in it. It’s a great win and it kind of propels us into the district. It’s a good start.”

Tuesday’s high-profile matchup lacked any sort of rhythm for most of the first half, which ended with Central holding a 26-23 lead. The Falcons held a slim advantage for most of the third quarter -- Skyline did rally to tie the game at 34-all when Ethan Caperton knocked down a 3-pointer and Zack Diggs sank a pair of free throws with 1:47 left in the quarter -- but Central opened things up quickly in the fourth period.

The Falcons ended the third with back-to-back buckets from Alex Neff to take a 38-34 lead, and Dylan Hamrick hit a trey to open the final quarter to push the margin to seven. Central’s lead reached 8 points three times in the first four minutes of the fourth quarter before eventually hitting 12 points after Strother’s one-handed dunk in transition and Chase Helsley’s fastbreak layup with 3:15 left.

Central’s lead never dipped below 7 points for the rest of the game.

The Falcons showed patience with the lead in the fourth quarter and focused on working from the inside out to control the pace of the game. Strother, a 6-foot-8 junior, said afterward that Skyline is the biggest team Central has played all season, and though Skyline big men Marlon Jackson and Lamar Schmitz spent much of the night on the bench in foul trouble, the Hawks made it tough for Strother to find buckets down low.

Strother did most of his damage at the free-throw line, where he made 13 of 15 free throws (the rest of the team was 3-for-14), and he finished with 17 points to lead a trio of double-digit Central scorers that included Neff (13 points) and Hamrick (11).

“Coach Whittle was just like ‘work the ball inside’ … because sometimes they would run one play and we would kind of mismatch on other people,” Strother said. “We had mismatches on smaller dudes so we just had to work it inside.”

Skyline, which had seven players averaging at least 5 points per game through its first 10 contests of the season, never did find its footing on offense against the Falcons.

Though the Hawks made 10 of 13 free throws, they shot just 27 percent from the field in the loss and finished the night scoring 25 points below their season average. Guard Mason Schmitz (13 points) was the only Hawk to finish in double-figures, and Skyline also committed 15 turnovers and was outrebounded 37-33.

Skyline first-year head coach Harold Chunn took the blame for the loss, citing the team’s poor practice on Monday in preparation for Tuesday night’s clash with the Falcons.

“They are absolutely a good team and they deserved to win tonight,” said Chunn, whose team got 9 points off the bench from Jayden Norwood, 6 points from Lamar Schmitz and 5 points apiece from Caperton and Budder Haley (eight rebounds). “We didn’t shoot the ball very well. We didn’t actually play our game. It’s my fault. It’s my fault. We’ll go to practice tomorrow and Thursday and get ready for William Monroe on Friday. … We don’t have any excuses. We lost.”

Whittle said Central, aware of Skyline’s athleticism, wanted to limit the Hawks in transition and force them into taking contested shots from the perimeter.

Though Central was far from flawless against Skyline, Hoover said he felt Tuesday’s game was a trend in the right direction.

“We always talk about we haven’t played our best basketball yet,” he said. “We have not shown everybody what we’re capable of and I think this was kind of like ‘OK, we’re getting there, we’re getting there.’ I think sometime soon we’re gonna go off and blow one team out of the water.”