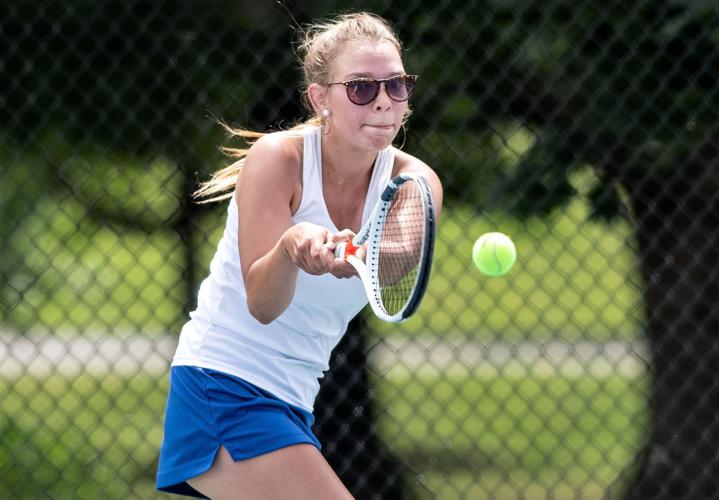 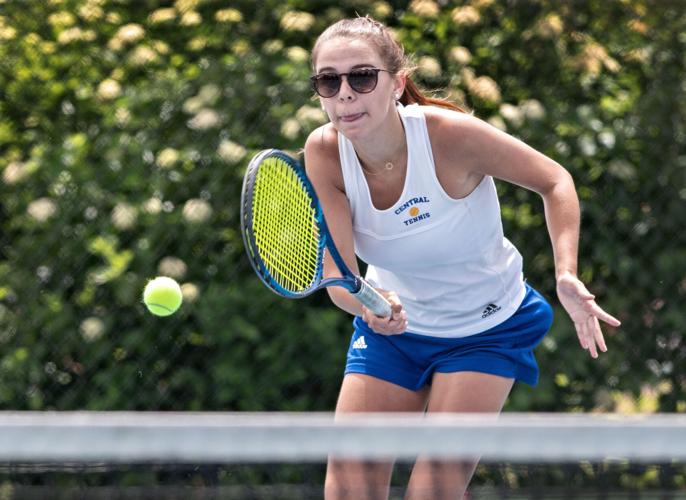 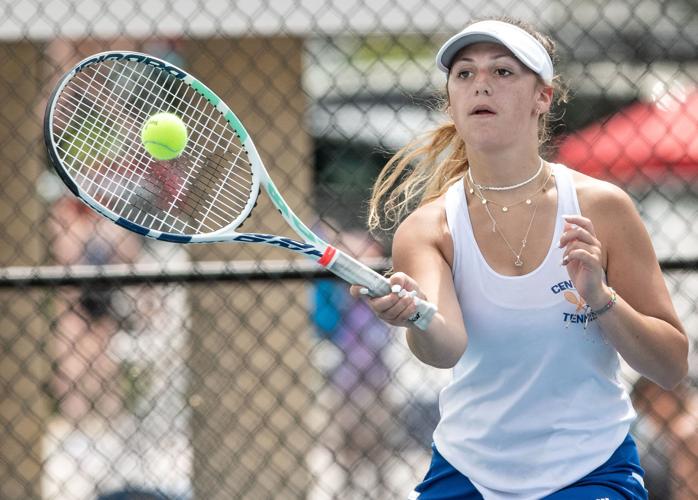 Central’s Lydia Scibelli returns a volley at the net against Randolph-Henry’s Sue Kim on Friday in Woodstock.

Central’s Lydia Scibelli returns a volley at the net against Randolph-Henry’s Sue Kim on Friday in Woodstock.

WOODSTOCK -- Things looked bleak for Central, especially for sisters Erika and Mallory Hutton. But freshman Mallory Hutton took charge and helped pull her older sister out of a funk just in the nick of time.

The sisters rallied for a three-set win at No. 1 doubles to give Central a 5-4 victory over Randolph-Henry on Friday in the girls tennis Class 2 state quarterfinals. The entire team match lasted five hours and 10 minutes.

Erika Hutton said after losing a tough three-setter in singles she was a little down at the start of her doubles match.

"Going in with a loss in singles I think that that affects your doubles play," Erika Hutton said. "So I was like telling myself you can't let this happen. But I could see my motivation was down, my confidence was down. But Mallory, she helped me get my confidence back, and she was a leader out there for me."

The pair lost the first set at No. 1 doubles, 6-2, in just 34 minutes to Randolph-Henry's Emily Tharpe and Mary Scruggs. On top of that, the Huttons had their serve broken to start the second set.

"I knew going into it that it was going to be tough," Mallory Hutton said. "And I knew that for the rest of the girls it was going to be tough for them, too. But one thing that I think that really helped me was (Central head) coach (Matt Smith) saying during a changeover that 'this is our home court, home advantage. All these people coming to watch us. We've been growing up here, playing here forever.' And that just really got me. We started playing a lot better."

Once they took the second set, Erika and Mallory Hutton kept the momentum going in the third set. They broke the serve of the Randolph-Henry pair in the third game and again in the fifth game and built a 5-1 lead.

Tharpe and Scruggs battled back and cut the lead to 5-3. Tharpe and Scruggs took a 30-15 lead in their next service game, but the Falcons won the last three points. Erika Hutton finished the match off with a forehand volley winner and a forehand winner on back-to-back points to end the one-hour-and-41-minute match.

"I'm really happy," Erika Hutton said. "During the match I was like 'you want to lead your team to states this year. That's something you've been thinking of ever since the beginning of the season is just taking your team to states,' and I did not want today to be the last day of our season. I know me and Mallory are going (to states as a doubles team), but I wanted to do it as a team. These girls worked just as hard as we did, and it just means everything that we get to go as a team and not just us. I know these girls wanted to go just as bad as we did. It was just motivation seeing them over there cheering us on. It was really just do this for them, get them there."

The team match was tied 3-3 after singles. Randolph-Henry's Sue Kim and Madeline Clatterbuck beat Central's Lydia Scibelli and Hannah Borden, 6-0, 6-2, at No. 2 doubles in 51 minutes to give Randolph-Henry a 4-3 team edge.

The Falcons (18-2) tied it up as Grace May and Keeyarra Dodson-Perez beat Randolph-Henry's Kate Hamilton and Izzy Crawford, 6-3, 6-3, at No. 3 doubles in one-hour-and-17 minutes.

"Keeyarra's not going to be with us next week," Smith said. "So this was kind of her last doubles match with them as a team together. So they went out and had fun. And I think because they went out and had fun with it, and they had good chemistry, I think that's why they were really successful. So they came out and just played happy and enjoyed it. And that's what I like to see."

Dodson-Perez, a senior, usually just plays doubles for the Falcons and went undefeated in doubles this season. Smith said she's a great asset to the team and will be missed.

"She is a first-year player," Smith said of Dodson-Perez. "And she is a natural serve-and-volleyer, which is a perfect fit for doubles."

"I thought (Marston) played one of her best matches all year," Smith said. "Lydia Scibelli was very crucial for our win today."

That left the Hutton sisters on court by themselves and each of their matches went three sets. Both of them had to deal with leg and foot cramps during their long matches.

"The first set I was like 'wow,'" Mallory Hutton said. "I was very amazed by how good she was. Her strokes, her serves. Her serves were amazing. But I just thought I got to keep going and that really helped me. I lost the first set and I was having some cramps, some foot problems, some leg problems. But coming over, resting (in between sets), talking to coach (Smith), I knew that I could do it."

Erika Hutton was up a break of serve in the second set, 4-3, but Tharpe rallied to force a third set.

In the third set, Erika Hutton served for the match at 5-4, but Tharpe broke back and then took a 6-5 lead. Erika Hutton saved a match point and then held for 6-6, but during that game began to suffer from leg cramps. Erika Hutton said she probably wasn't drinking enough water during the changeovers and it was the first time she had ever experienced it.

She fell behind in the tiebreaker, 4-2, and then received a three-minute medical timeout for the cramps and said she ate some mustard to help her.

"It just didn't go in my favor, but I thought I played well in singles," Erika Hutton said.

The No. 1 singles and doubles matches could be previews of state finals next week. Erika Hutton and Tharpe are in the Class 2 state singles semifinals held at Virginia Tech. They are on opposite sides of the draw but could meet in the finals on June 11. Likewise in doubles, Erika and Mallory Hutton and Tharpe and Scruggs are in the Class 2 state doubles semifinals held at Virginia Tech on June 9 and June 10.

Central hosts Poquoson, a 5-0 winner over Mountain View on Friday, in the state semifinals on Monday. Like Central, Poquoson beat Randolph-Henry 5-4 in the Region 2A finals last week. A win by Central would give the program its first state final appearance since 1979.

It's Central's second appearance in the state semifinals in the last three tennis seasons. Smith said he was proud of his team.

"It's a great accomplishment," Smith said. "It's nice that we get the home-court advantage. It's been a good team. It's been a great year. I'm glad they accomplished this today. We get to play one more for the home-team fans."