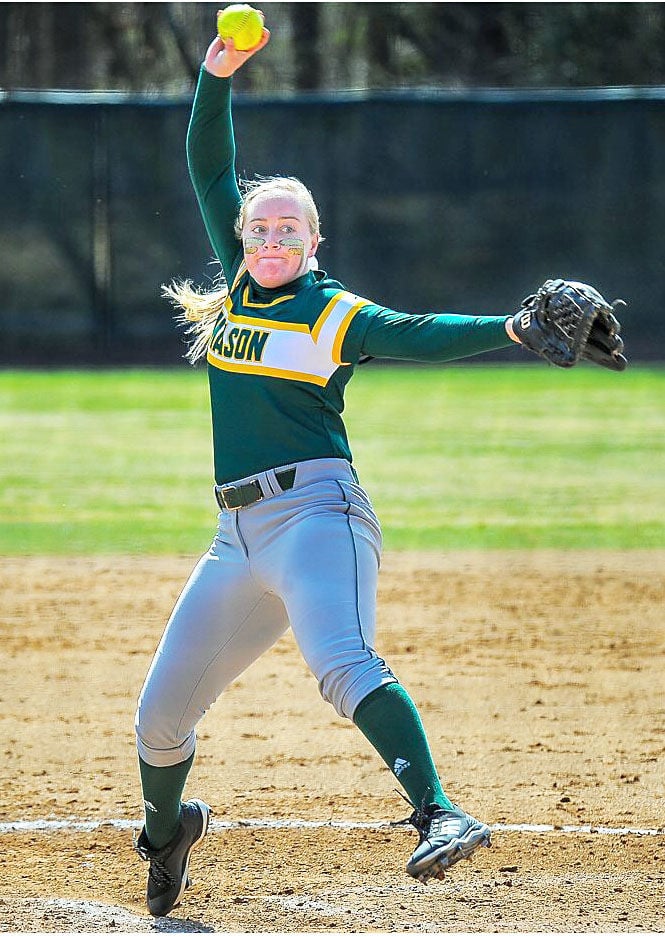 George Mason senior Bekah Ansbro makes a pitch during a game this season. The Central graduate lost her senior year due to the Atlantic-10 canceling the season during the ongoing COVID-19 pandemic. Ansbro plans to use a fifth-year of eligibility, which the NCAA is trying to grant to all seniors for spring sports. 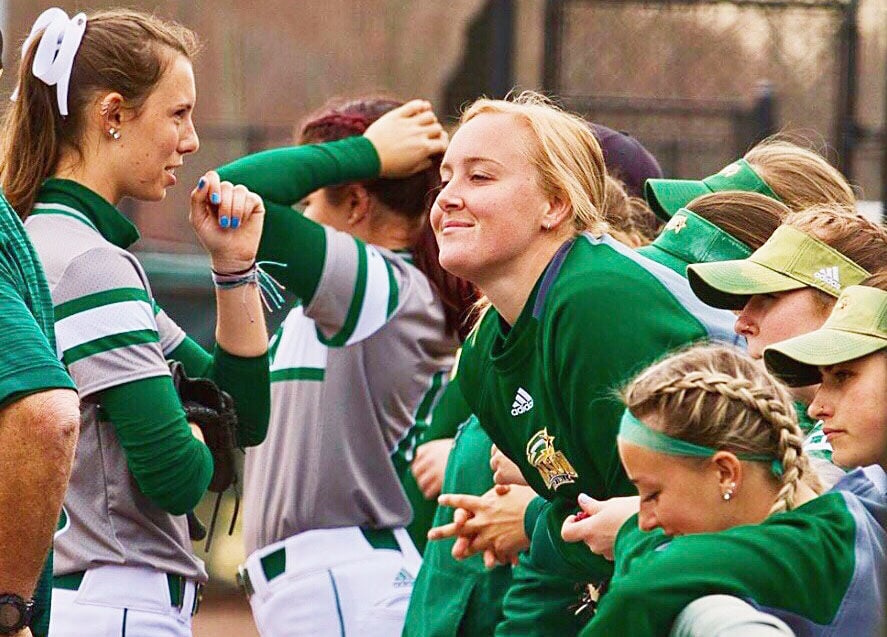 George Mason graduate student Bekah Ansbro, right, looks on before the start of a game this season. Ansbro is hoping to get a fifth-year of eligibility if the NCAA is able to grant it to all spring seniors. 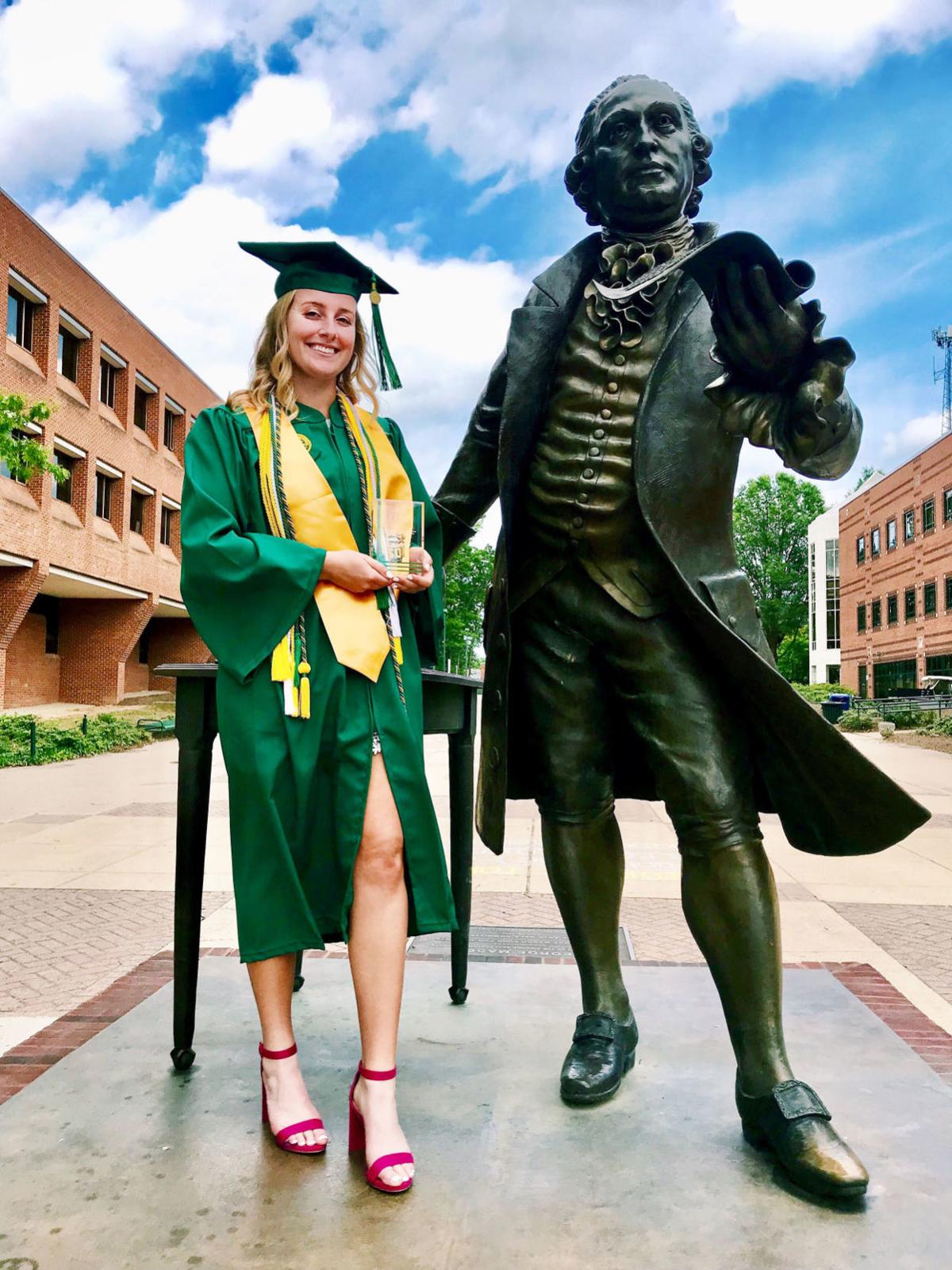 Bekah Ansbro poses after graduating with her bachelor’s degree from George Mason last May.

George Mason senior Bekah Ansbro makes a pitch during a game this season. The Central graduate lost her senior year due to the Atlantic-10 canceling the season during the ongoing COVID-19 pandemic. Ansbro plans to use a fifth-year of eligibility, which the NCAA is trying to grant to all seniors for spring sports.

George Mason graduate student Bekah Ansbro, right, looks on before the start of a game this season. Ansbro is hoping to get a fifth-year of eligibility if the NCAA is able to grant it to all spring seniors.

Bekah Ansbro poses after graduating with her bachelor’s degree from George Mason last May.

Bekah Ansbro is hoping her final year of softball gets a reprieve.

The George Mason grad student pitcher like many other seniors around the country had her final season taken away. Last week, the NCAA announced that it was canceling the National Championships in all winter and spring sports this year due to the COVID-19 pandemic.

Ansbro, a 2016 Central graduate, said she and her teammates were in a team meeting when they heard the news.

“We all got pretty emotional,” Ansbro said. “We all started hugging each other and crying with each other. Theoretically, the Atlantic-10 could have played for the rest of the season, but we figured at that point they weren’t going to do that.”

The next day the Atlantic-10 announced that the spring sports season was canceled.

Ansbro said it’s tough thinking that her career could be over.

“You don’t realize how much time you devote to something until you’re not devoting any time to it,” she said. “I would like to say I have gotten a lot of chores done around the house but honestly I haven’t quite made it there. We’re all very upset. It’s very difficult, especially as a senior, to think that you played your last game and you didn’t even realize it. It’s heartbreaking for my fellow seniors and seniors across the country and all the other athletes across the country to have their season end this way. If it’s going to end, you want it to end on your terms and it’s difficult to have it end when it’s out of your hands.”

Ansbro is one of four seniors on the Patriots’ squad.

The NCAA has announced that it plans to give a fifth year of eligibility for all seniors in spring sports. Ansbro is hopeful that will actually happen and she has a little bit more time left to play softball at the collegiate level.

“That was something that if they offered it I knew I was going to take it,” Ansbro said. “I think personally I’ve held it together pretty well just because in my mind I’m in denial. And I’ve convinced myself that I’m going to have another year. I know that the NCAA is working really hard with all the conferences and institutions and compliance officers to work that out and make that happen. There’s just a lot of bumps that they’re going to have to iron out, because there’s just so many different circumstances.”

Ansbro received her bachelor’s degree in sports management last May and is set to graduate with her master’s degree this May. She said she has made a career change and is now trying to get into law school.

Ansbro has had a strong career at George Mason and improved in the circle with each year.

Last year she was the Atlantic-10 Pitcher of the Week twice. She was third in the conference in ERA (2.42) and fifth in the conference in strikeouts (100). She threw a no-hitter on March 9, 2019 against Lafayette. She had eight complete games last season, including two shutouts, and struck out 13 against Cornell. She finished last year with an 8-11 record.

This year Ansbro said she started off a little slow in part due to putting too much pressure on herself.

“The beginning of this season I had a pretty rough start,” she said. “It was something that my pitching coach Justin Walker and I talked about. He understands what we’re going through as seniors, because you want to try so hard to be good. And how disappointing would it be to have put in all this work and then your last year you just kind of blow it? So I did have a rough start, and I felt like personally and as a team we were just getting hot. We had come off of a 4-0 weekend. We were hitting the ball real hard, playing great defense. Our pitching staff overall was really just pinpoint accuracy. We were spinning the ball well and it just got shut down. It got taken away from us and that’s tough to hear.”

Despite the slow start, Ansbro was 3-3 this season with five starts and one complete game in 30 innings pitched. She had 23 strikeouts. The Patriots were 7-12.

Ansbro said that when she was in high school she wanted to go to a school further away than George Mason but just fell in love with it. Four years later she knows she made the right choice.

“The things I’ve been able to accomplish and the opportunities that I’ve had at this university, I don’t think I would have had anywhere else,” Ansbro said. “Truly like academically, I have had the best experience I could have asked for. The professors care about their students so much, and they’ve been incredibly helpful in my journey and kind of helping me find my way.”

Ansbro said she is still in Fairfax and plans to remain there even though classes at the school are now online only.

She said many of her teammates are starting to leave and it’s been tough to see them go not knowing what the future holds.

“It’s tough to just not be able to show up to practice anymore and see all your friends,” Ansbro said. “Of course now that we’re having to work on our social distancing and self quarantining, you don’t even really get to see anyone anymore. A lot of our teammates have gone home and it’s hard as one of the older girls to think that might be the last time you see that teammate, if not for six months, then for a long time. So it’s definitely emotional for us older girls. I think we’re still coming to terms with it to some extent. You can be going about your day pretty regularly and then it kind of hits ‘oh, it’s 1:30, I should be at practice right now but instead I’m sitting at the kitchen table doing homework.’”