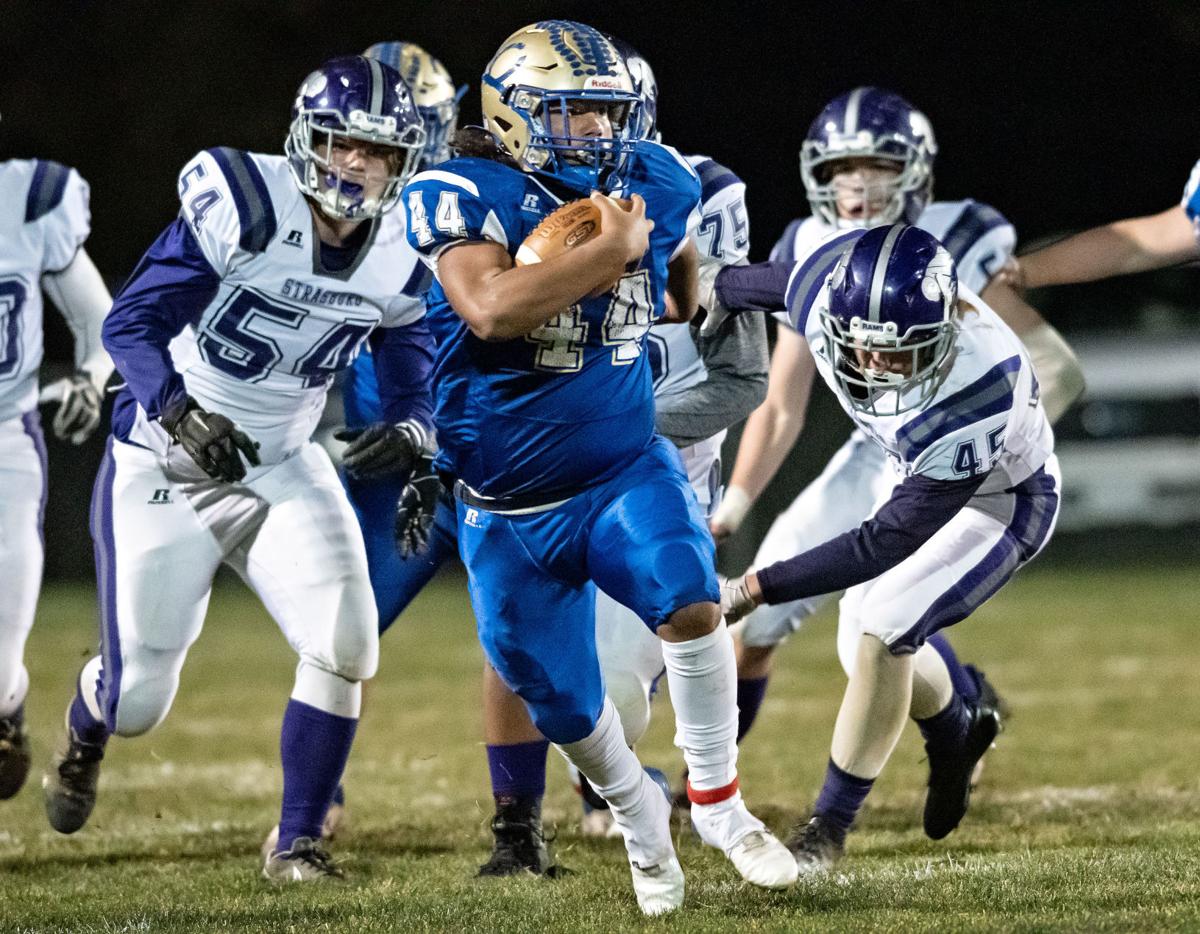 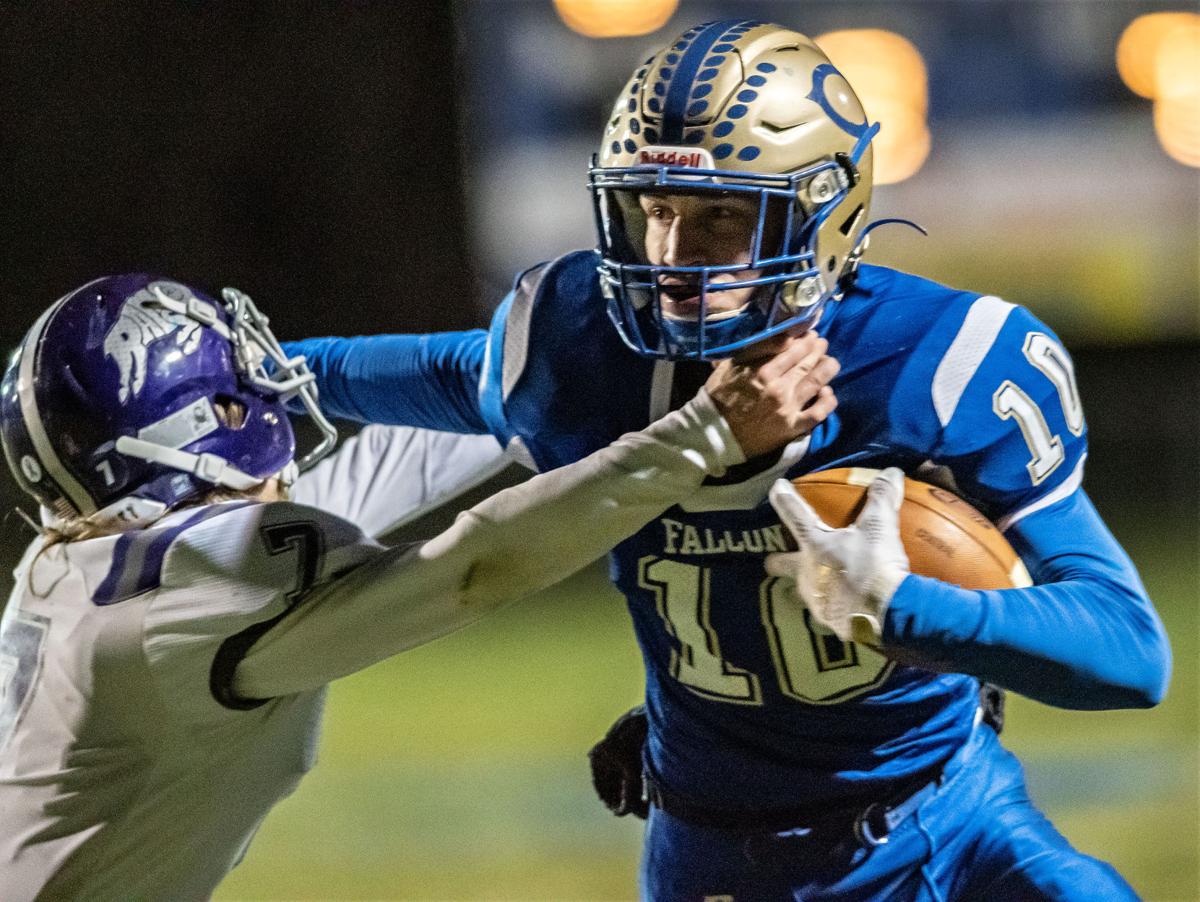 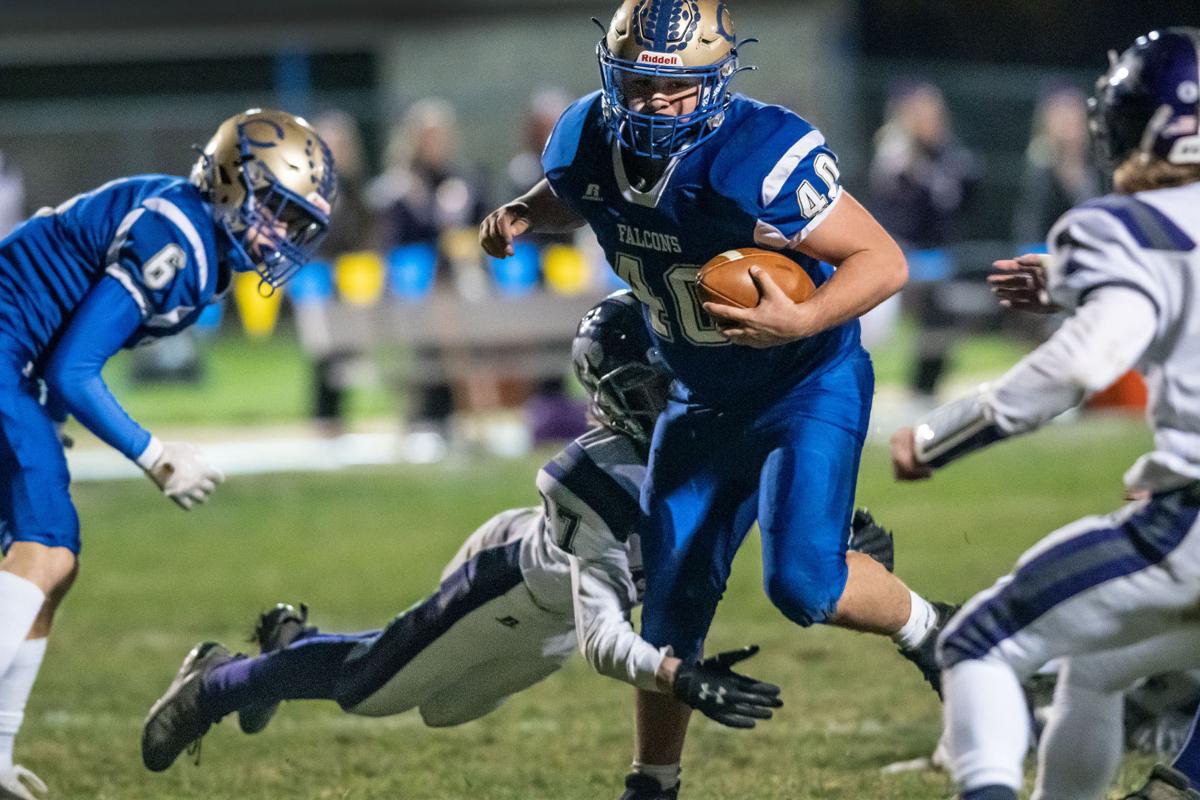 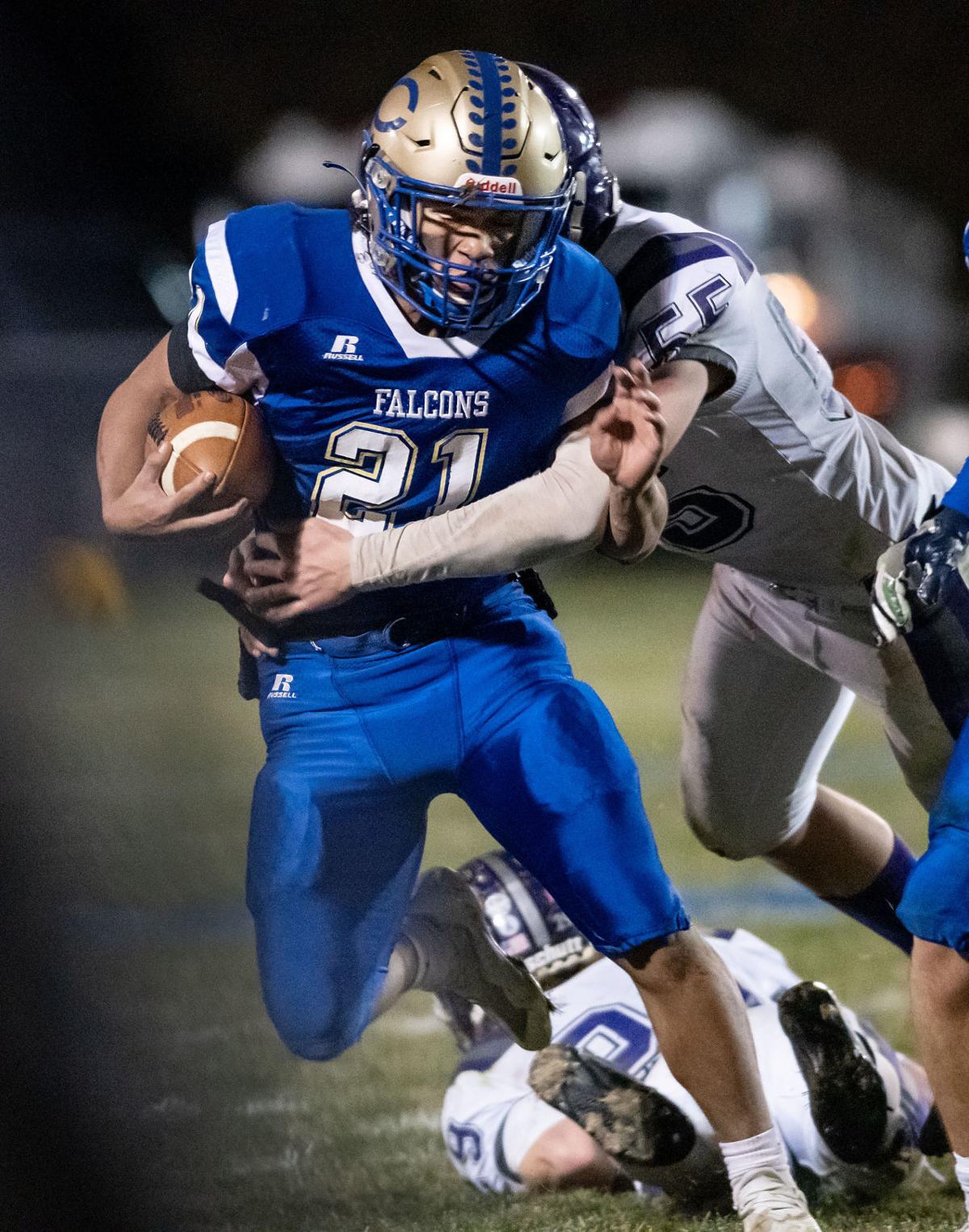 Central’s Nazaiah Merit runs for yardage as Strasburg’s Colby Shaw moves in for the tackle. 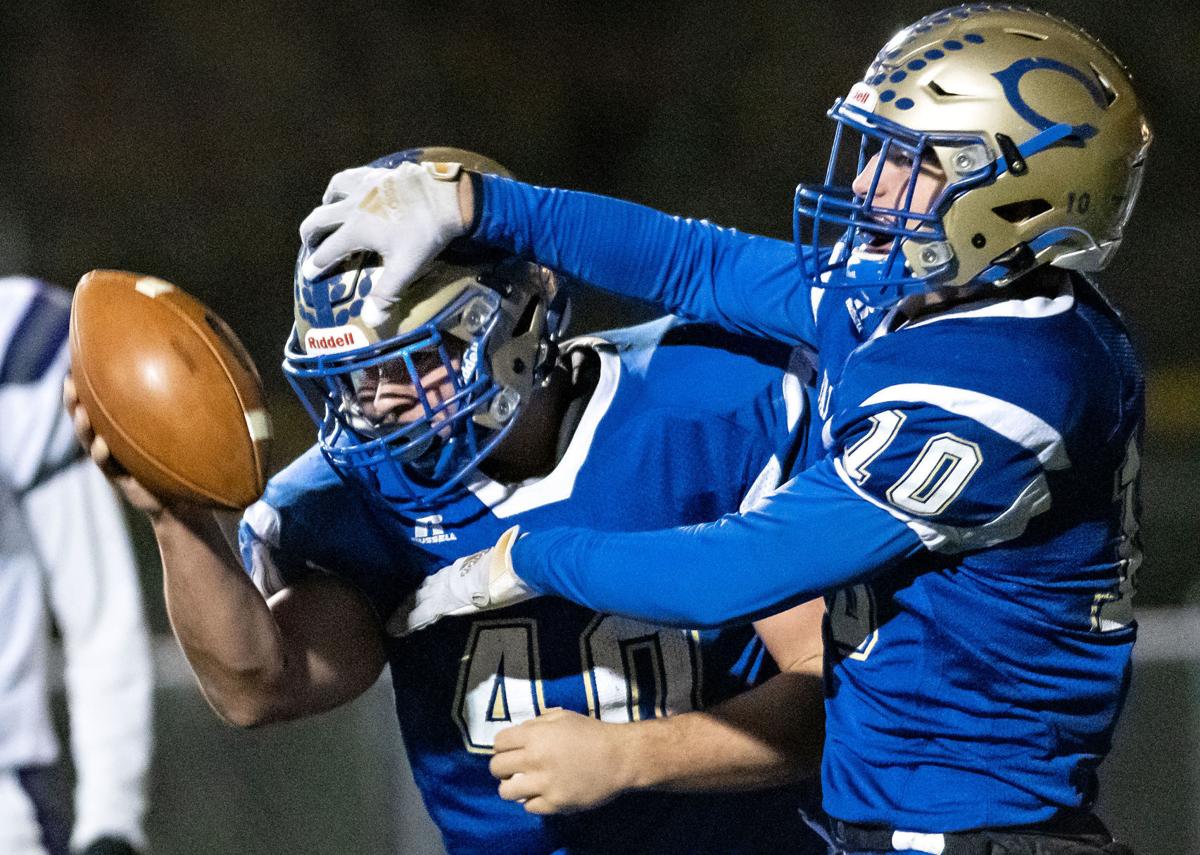 Central’s Caleb Daugherty, right, celebrates a touchdown after a run from Tyler Forbes during last week’s win over Strasburg. The top-seeded Falcons host second-seeded Stuarts Draft on Friday in the Region 2B finals.

Central’s Nazaiah Merit runs for yardage as Strasburg’s Colby Shaw moves in for the tackle.

Central’s Caleb Daugherty, right, celebrates a touchdown after a run from Tyler Forbes during last week’s win over Strasburg. The top-seeded Falcons host second-seeded Stuarts Draft on Friday in the Region 2B finals.

WOODSTOCK -- For the second time in three weeks, Central bested county rival Strasburg on the football field. This time, the victory sent the Falcons soaring into the Region 2B championship game.

Central clamped down on the Rams defensively on Friday night and took advantage of a mistake-prone Strasburg offense, scoring 20 points off turnovers in a 29-8 regional semifinal win that sends the top-seeded Falcons into a clash with No. 2 Stuarts Draft for the Region 2B crown and a spot in the Class 2 state semifinals.

“The key was not to underestimate them,” Falcons senior Caleb Daugherty said of the Rams, whom Central beat by 28 points in Strasburg in the regular-season finale on Nov. 6, “because we knew they were gonna come out with vengeance and we knew they were gonna play harder. And they did. We just didn’t make too many mistakes and they did, and we capitalized. We just played good football. That was the key.”

Central’s defense -- which held the Rams to 153 yards, 87 of which came on Strasburg’s final two possessions with the game well in hand -- set the tone immediately for what would be a miserable night for the Rams offensively.

Strasburg (9-3) caught a break on the opening kickoff when the Falcons (10-1) failed to field the short kick and allowed Rams senior Brady Neary to dive on the ball at the Central 25-yard line. But the Rams could do nothing with the opportunity and turned the ball over on downs at the 21.

Central followed with a 79-yard touchdown drive on its first possession, during which senior running back Isaiah Dyer rushed for 71 yards -- including consecutive runs of 25, 23 and 13 yards -- before quarterback Ashton Baker capped the drive with his 4-yard scoring run on fourth down that put the Falcons up 6-0.

“We were trying to make a statement,” Dyer, who finished with 100 yards rushing, said of Central’s first drive against a Strasburg defense that had been stout for most of the season. “Last time, they were holding (the running game down) little bit more than this time, so we just got out. We were telling the O-line, and the O-line, they worked their butts off. They put heads on heads and made the hole for me, and I did what I could.”

Strasburg’s defense seemed to stiffen after that first score, though the Rams’ inability to hold onto the football put that unit in some tight spots. Central’s final three touchdowns all came on drives that began in Ram territory following a Strasburg turnover, and the Falcons also got a 28-yard field goal from Luc Retrosi that was set up when Central forced the Rams into a three-and-out from inside their own 5 late in the third quarter.

The Falcons led 12-0 at halftime and scored 17 points in the fourth quarter to put the game away.

Strasburg coach Mark Roller, who said his team “couldn’t hold onto anything” offensively, felt his defense did a “great job” against a Central offense that finished with 275 yards, including 179 rushing.

“They were put up against the wall and they responded and did a good job of holding them to 12 points at the half,” Roller said. “Even to start the third quarter we did a good job there for a while, but we just kept turning the ball over and putting our defense in a bad spot.”

The Rams, playing without injured starting QB Ryan Roller, committed their first turnover of the night early in the second quarter when a wide toss hit a Strasburg lineman that had gotten pushed back off the line of scrimmage, resulting in a fumble that sophomore Nathan Lopez recovered at the Strasburg 48.

Strasburg's defense held and forced a turnover on downs at the 32, but the Rams gave the ball right back on another fumble that Lopez recovered at the Strasburg 19, setting up Baker’s 6-yard touchdown pass to Jacob Walters that put Central up 12-0.

Lopez, who had a huge night with three fumble recoveries and a sack, also recovered a fumble in the fourth quarter to set up Baker’s 25-yard dart to Daugherty (four catches, 71 yards) that the latter hauled in with a great leaping grab at the goal line for a TD that put Central up 22-0 with 9:21 left.

“Nathan Lopez played a heckuva game,” said Baker, who completed 8 of 11 passes for 96 yards and accounted for three touchdowns. “He’s the guy that really forced a lot of things to happen, along with the whole defense, obviously. It’s just a solid group playing defense and they set us up pretty well on offense.”

James Bland’s interception on Strasburg’s next possession -- which he returned 38 yards for a touchdown that was taken off the board by an illegal block -- set up Central’s final score of the night, a 31-yard TD run by fullback Tyler Forbes with 5:44 to play.

“This one was really big for us,” Baker said of the win. “(We’re) the third team ever at Central to go play for a region championship. We had that in our minds all night but at the end of the day, we just completed Step 2 and now we’re on to Step 3.”

Despite Friday’s loss, Roller said Strasburg’s 2021 fall season -- during which it won nine games and came within a win of returning to the Region 2B championship game even after having to replace 10 starters on each side of the ball -- was “absolutely phenomenal.”

“Coming into the season, people didn’t expect us to win very much, a couple games here or there,” he said. “To turn nine games out, it says a lot about their character. Those guys, they had that never-give-up mentality, and that’s just what it was. We hung in there tonight for a long time.”

Central, which has won seven straight games, will look to keep that momentum going at home against Stuarts Draft next week. The Cougars, winners of the last two Region 2B championships, rolled to a 33-3 win in their regional semifinal game against Clarke County, which handed the Falcons their only loss of the season back in mid-September.