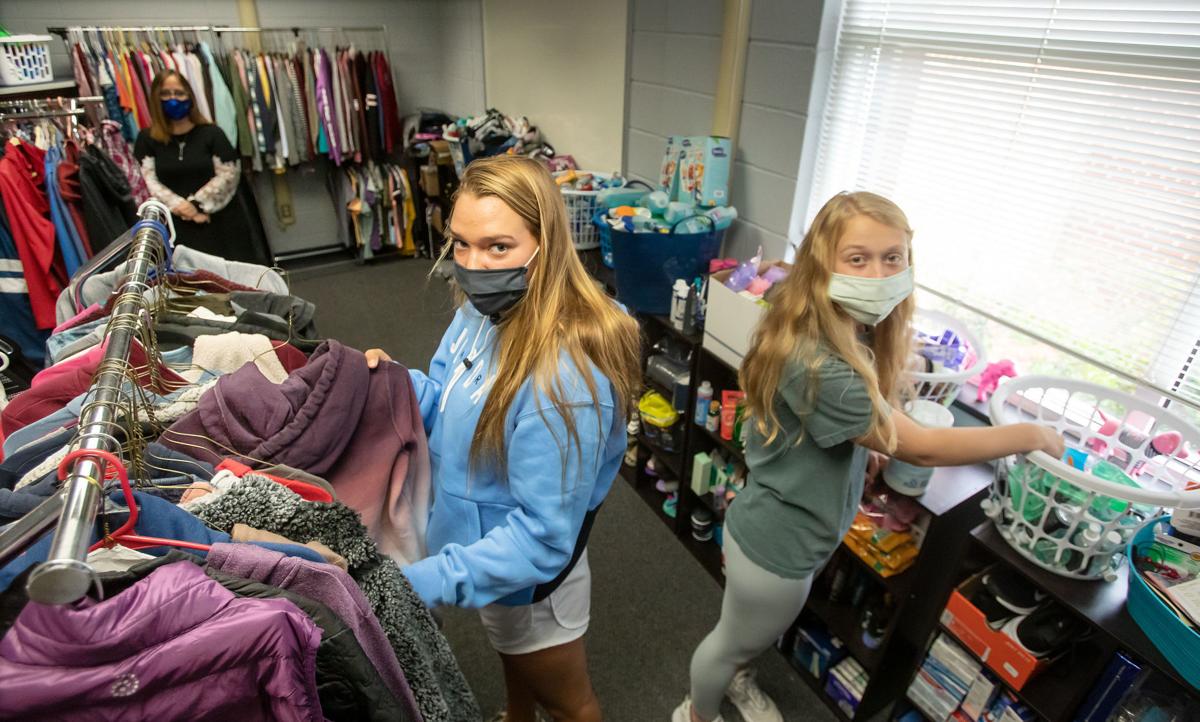 Central High School seniors Erika Hutton, left, and Emma Eberly, right, both 17, stand inside the school’s new store named Central Outfitters. The store, which occupies part of a former classroom and office, will house clothing items and toiletries for students in need. 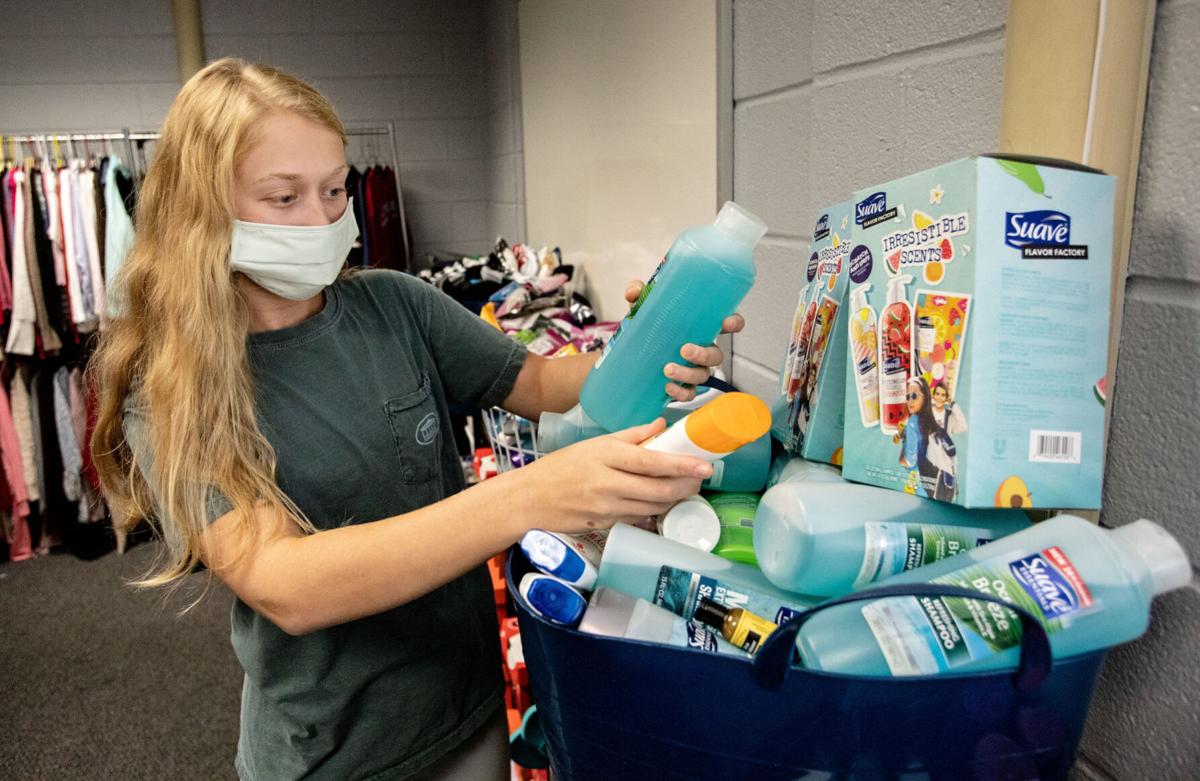 Emma Eberly sorts through a bucket of hair products inside the school’s new store.

Central High School seniors Erika Hutton, left, and Emma Eberly, right, both 17, stand inside the school’s new store named Central Outfitters. The store, which occupies part of a former classroom and office, will house clothing items and toiletries for students in need.

Emma Eberly sorts through a bucket of hair products inside the school’s new store.

WOODSTOCK — Central High School Principal Lori Swortzel has several long-term projects she wants to see happen at her school. The first of those has arrived — Central Outfitters.

It’s a store with free clothing, deodorant, shampoo, and soap for students who need it. Swortzel sent out a post on Facebook on July 3 asking for donations from the community and the response she received was overwhelming.

“The entire community got involved,” Swortzel said. “We had churches involved and by the time they started this year in school this room — it was jam-packed. Every single (product) was donated. We have Nike shoes that have never been worn. It’s pretty incredible. But the community outpouring, the community support has been incredible, and it’s really all come from one Facebook post. You can see the positive aspect of social media. I think we’ve all experienced the negative side of it. But this has been a real positive outpouring and the power of social media has been able to do it.”

Swortzel took an old school room and office space, which wasn’t being used, and turned part of it into Central Outfitters. It received hundreds of clothing and different hygiene products, which students that need it can get for free. Central girls basketball coach Ashleigh Fletcher had some of her basketball players help out over the summer to start getting the room organized.

Central teacher Chris Kaznosky had two of his students, seniors Erika Hutton and Emma Eberly, both of whom are basketball players, work every day since school started on organizing all the clothing and different products.

“There were a lot of clothes, the whole room was filled with bags full of clothes,” Hutton said. “It took a while. We just started organizing the clothes by like shorts and pants and shirts, and then later we moved onto sizes and men’s and women’s. It took a lot of organizing.”

Students who want to shop at the store just need to make an appointment through a Central administrator or school counselor. Swortzel said they can do it privately after school as well.

“We offer private appointments after school, so that they can try on clothes and friends won’t know that they’re in here,” Swortzel said. “Because there’s a stigma behind hand-me-downs or hand-me-outs. A lot of the stuff is new, but we didn’t want the kids to feel targeted if people knew they were in here shopping.”

Swortzel said she just felt like there was a need for Central Outfitters. especially during the pandemic when many people were unemployed.

She said the plan is to offer cooking classes for students. Swortzel said some students are caregivers for their younger siblings and she wants them to know how to cook a healthy meal.

Swortzel said a more long-term goal is to have a laundry facility, where a student could do their laundry.

Swortzel said she feels like the store is a good thing for the school.

“It’s been a great experience for us to have that available here,” she said. “Especially when our counselors know somebody that’s in need and can just immediately hook them up versus trying to take the time to go out in the community and find that. The community has come to us, and we’ve kind of brought them in to be a part of our school.”

Swortzel said since they just finished organizing everything, they haven’t had too many students come into the store yet. But she said she expects more to do so as the year goes on and they realize how good the quality of the products are.

Eberly said she feels like the student body will be happy to have the store and will use it.

“We’ve seen some kids come in here while we’re in here to get stuff that they need,” Eberly said. “And so some kids know about it already and are glad to be in here and glad to have that.”

Swortzel said they also plan on expanding the products they have in the store depending on the season.

“We have a vision to around prom season to have some prom gowns,” Swortzel said. “During the winter, we’ll have a coat drive and boots or something like that. Items for colder weather. Right now a lot of the stuff that is in there is summer and fall things.”

Swortzel said she wanted to work on projects like Central Outfitters because she feels it’s important to help students with more than just school work.

“We as a school have to look at the whole child,” Swortzel said. “So many kids are coming in and their immediate needs aren’t met. Or they may be self-conscious because they don’t have what others have. So it’s just a way for us to be able to do something. It doesn’t cost us anything but time, and it’s time well spent.

“It also helps us support families, who may be in need. So many people were out of their jobs during the pandemic. And even just some things like shampoo and deodorant — that’s a huge expense. And those expenses just keep going up. It’s something that we can do as a school.”

Swortzel said she couldn’t have done any of it without the community.

I’m very thankful for the community support,” she said. “This Woodstock community and the Central families are extremely giving and supportive. And it certainly has been a community effort.”