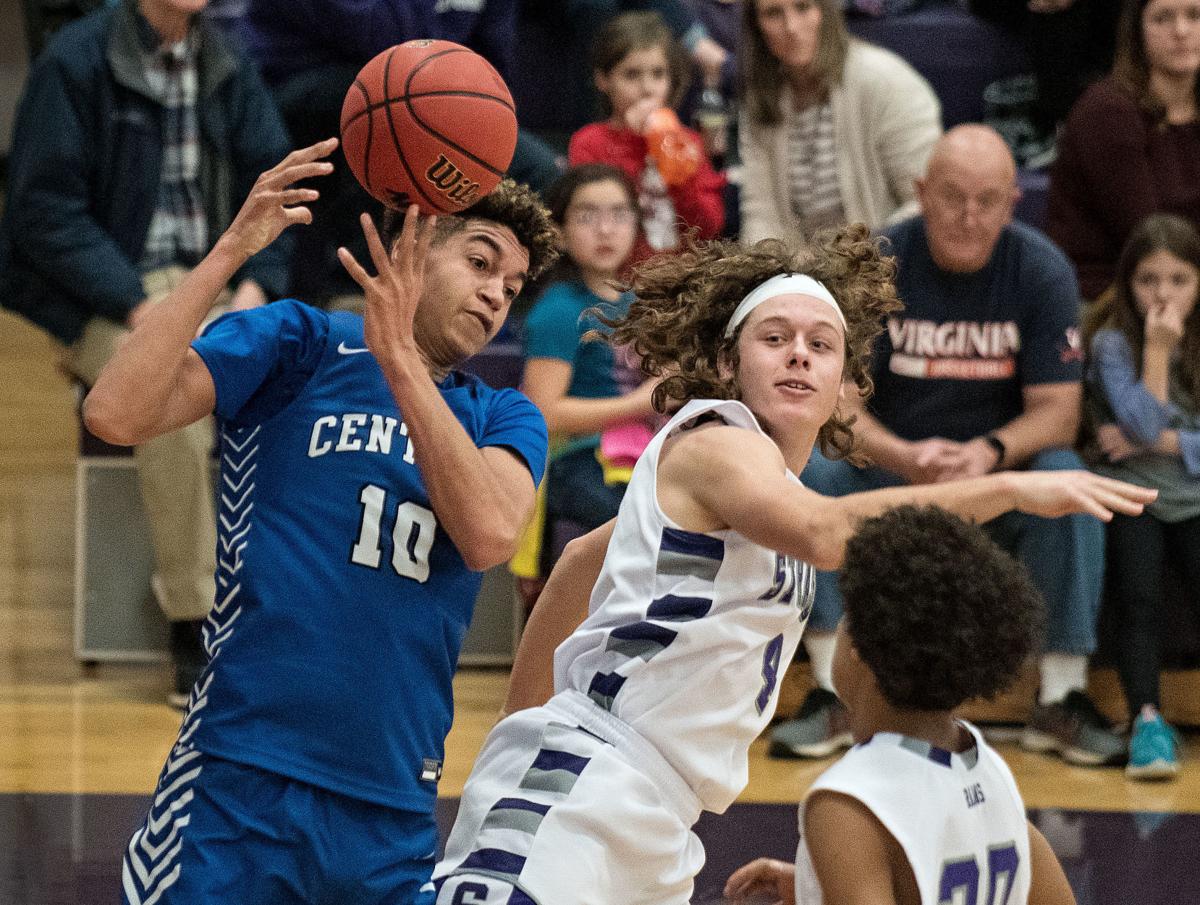 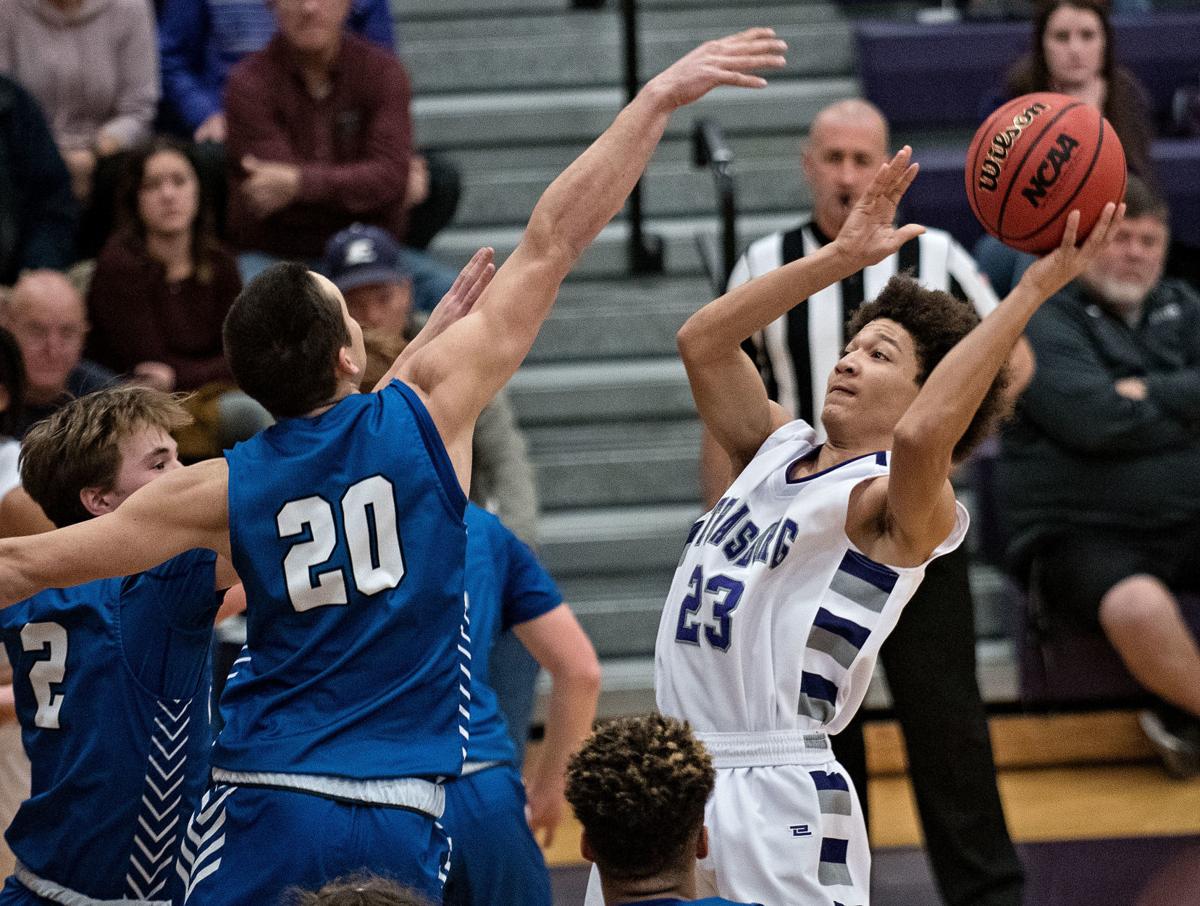 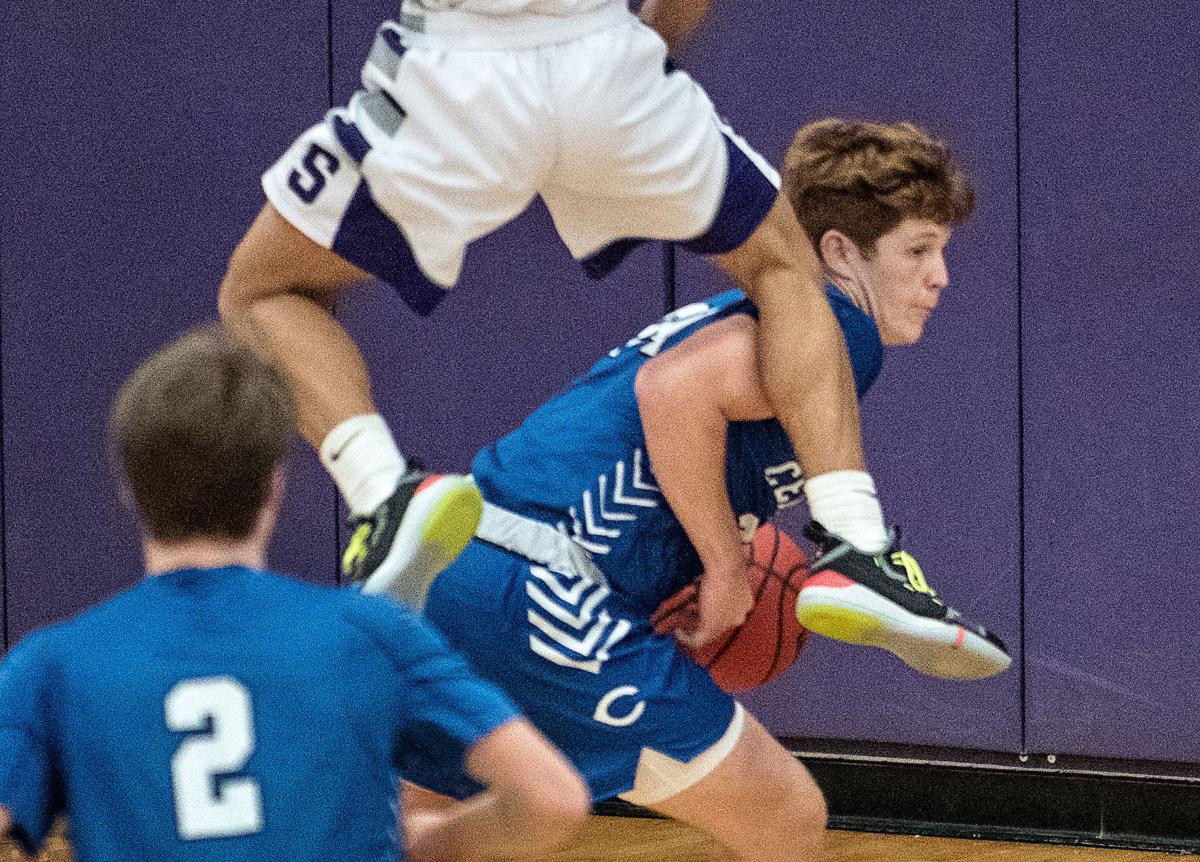 Central’s Brett Barr gets fouled by Strasburg’s Craig Pangle Jr. as he makes a move under the basket Friday night. 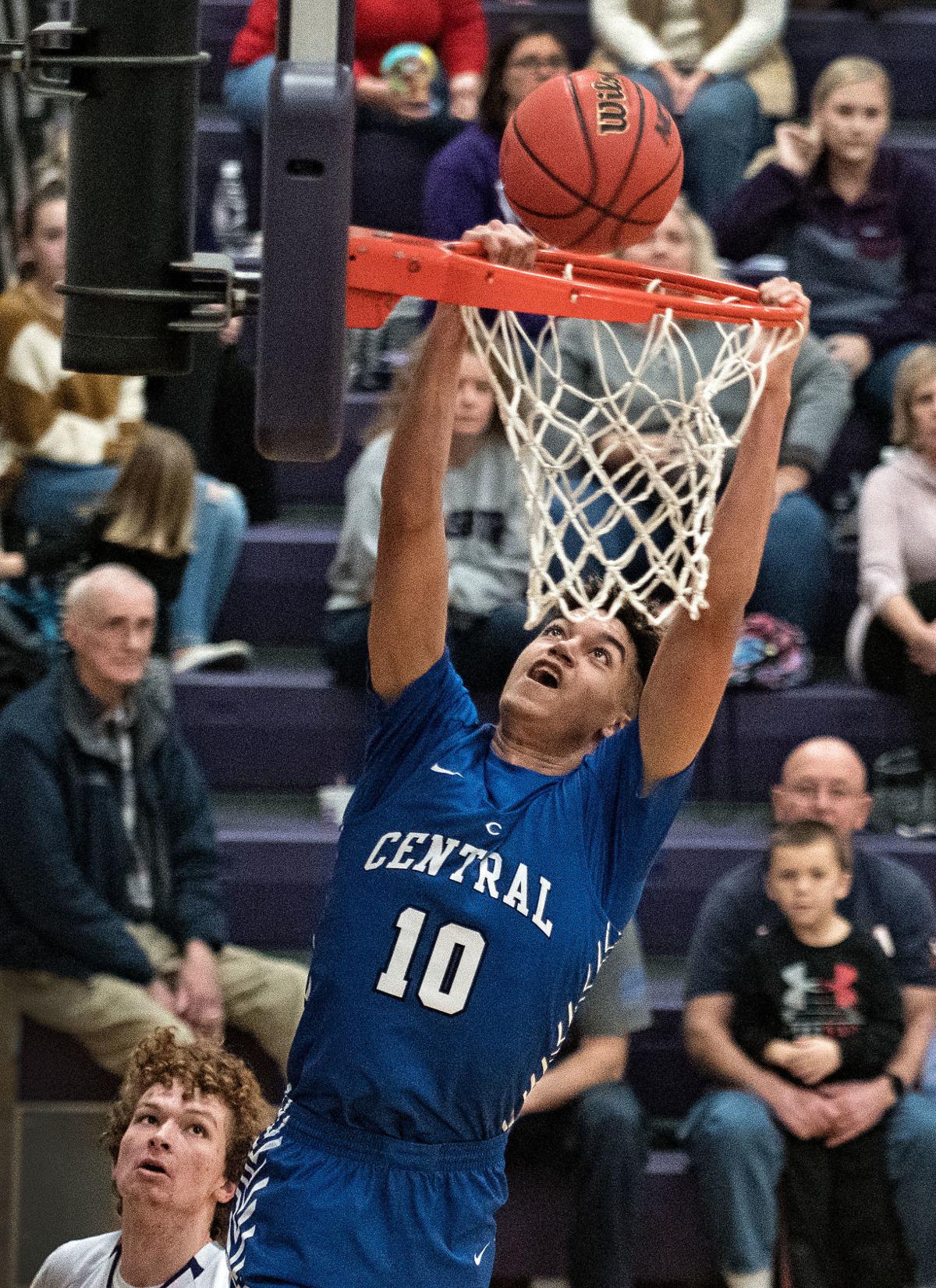 Central’s Dominic Strother goes up for a dunk during second half action against Strasburg Friday night. 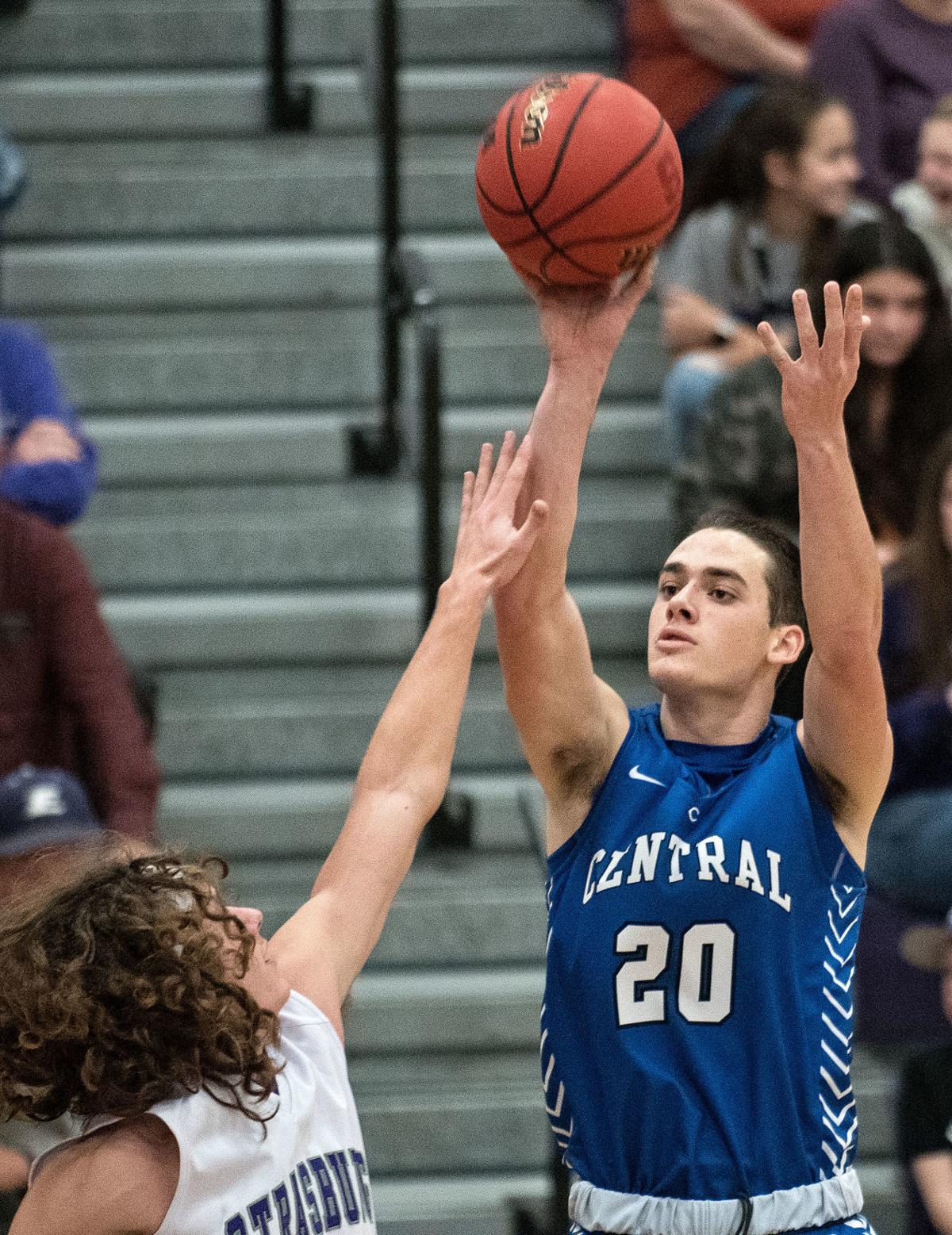 Central’s Brett Barr gets fouled by Strasburg’s Craig Pangle Jr. as he makes a move under the basket Friday night.

Central’s Dominic Strother goes up for a dunk during second half action against Strasburg Friday night.

STRASBURG — Between injuries, illness and late arrivals from the football team, Central’s boys basketball team slogged through the preseason at less than full speed. The Falcons treated fans to a glimpse on Friday night of what they could look like when they do start consistently hitting their stride.

After enduring a four-minute scoreless stretch to start the third quarter against Strasburg that kept things tight with 12 minutes to play, the Falcons dialed up a 30-9 run to close out a 55-29 non-district win to end the season’s opening week with a 2-0 record.

The play hasn’t been pristine so far, but Central head coach Jeff Whittle is excited about the potential of a talented Falcons squad that flashed some of that reason for optimism against the Rams.

“We saw it there,” Whittle said of Central’s second-half surge against Strasburg. “I mean defensively I thought we looked good at times and other times we just need to be a little bit smarter about not gambling or reaching as much. We can still press and stuff, and just be able to sprint back a little better in transition and guard the ball a little better without fouling. We’re very aggressive, we’ve just got to be a little bit headier in certain situations. And then the same thing on offense, there were a couple times we were a little bit out of control, just come to a jump-stop and make a little simple pass, something that I think is just gonna develop here over time.”

Central’s offense struggled at times against Sherando in a season-opening 57-54 come-from-behind win last Tuesday, and on Friday the offense was once again erratic. But when Strasburg cut the Falcons’ lead to 5 points midway through the third period, Central suddenly emerged from its dry spell and scored more points over the last 12 minutes of action than it did through the first 20.

Six-foot-8 forward Dominic Strother, as will be the case all season, was a big part of that turnaround, as his second dunk of the night in transition lit the spark that got the Falcons going offensively. It was the first of 10 made field goals for Central on 14 attempts spanning the third and fourth periods.

Strother, who should find himself in favorable matchups for most of the season, had a double-double with 25 points and 12 rebounds against the Rams, his second 20-point outing in two games this season.

“We just move the ball and we work really good together,” Strother said. “And we shoot the ball really well. If they get it in (the paint) to me, I have shooters everywhere and I can just pass it out.”

Senior swingman Alex Neff joined Strother in double figures with 12 points on Friday night, and point guard Dylan Hamrick, a Strasburg transfer, is a capable scorer who dropped 20 points in his Central debut against Sherando.

“Our ratio of bigs to guards is very good,” Neff said, “and our guards know how to feed the post and everything else.”

Central’s offense is still a work in progress though, but Whittle said the things that have plagued the Falcons on that end — primarily poor ball security — are things that are correctable with more practice time now that the Falcons have a full squad.

“Just getting these guys continuing to play together,” said Whittle, who noted that Central often didn’t have enough bodies in practice to do any live 5-on-5 work in the preseason. “Offensively, I don’t think based on the last couple years, I just think we’re a little bit out of sync. We’re not in a good rhythm, like we don’t know our stuff as well.

“I think once we just get some more practices under our belt and get in a little bit more of a rhythm and a better feel for how each can complement one another (we’ll be fine) because we’ve got a nice group.”

Neff said Central already saw progress between games one and two last week, though he added that the rivalry aspect added to Friday’s game prompted the Falcons to be a little bit sharper. And he noted that the Falcons still need to play better defense, though they took some strides in that aspect as well against the Rams.

Strasburg (1-1) suffered a miserable offensive night while Central threw some different half-court defenses and some full-court zone pressure at the Rams and finished the night shooting just 21 percent from the floor. That mark included a 15-percent effort in the second half, and the Rams also made only 3 of 16 free throws.

It was quite the drop off from an outing that saw four Rams score in double-figures in the opener against Warren County, but those types of inconsistencies are expected from a Strasburg squad getting major minutes from first-year varsity players.

“These types of games against that team are gonna prepare us for district play,” Rams head coach Larry Fox said after the loss. “East Rock is gonna have a big kid just like Dominic there, so it’s gonna help us prepare. We’ll watch film and make adjustments. I think we did a lot of good things, we’ll just have to go back and look at the film a little bit.”