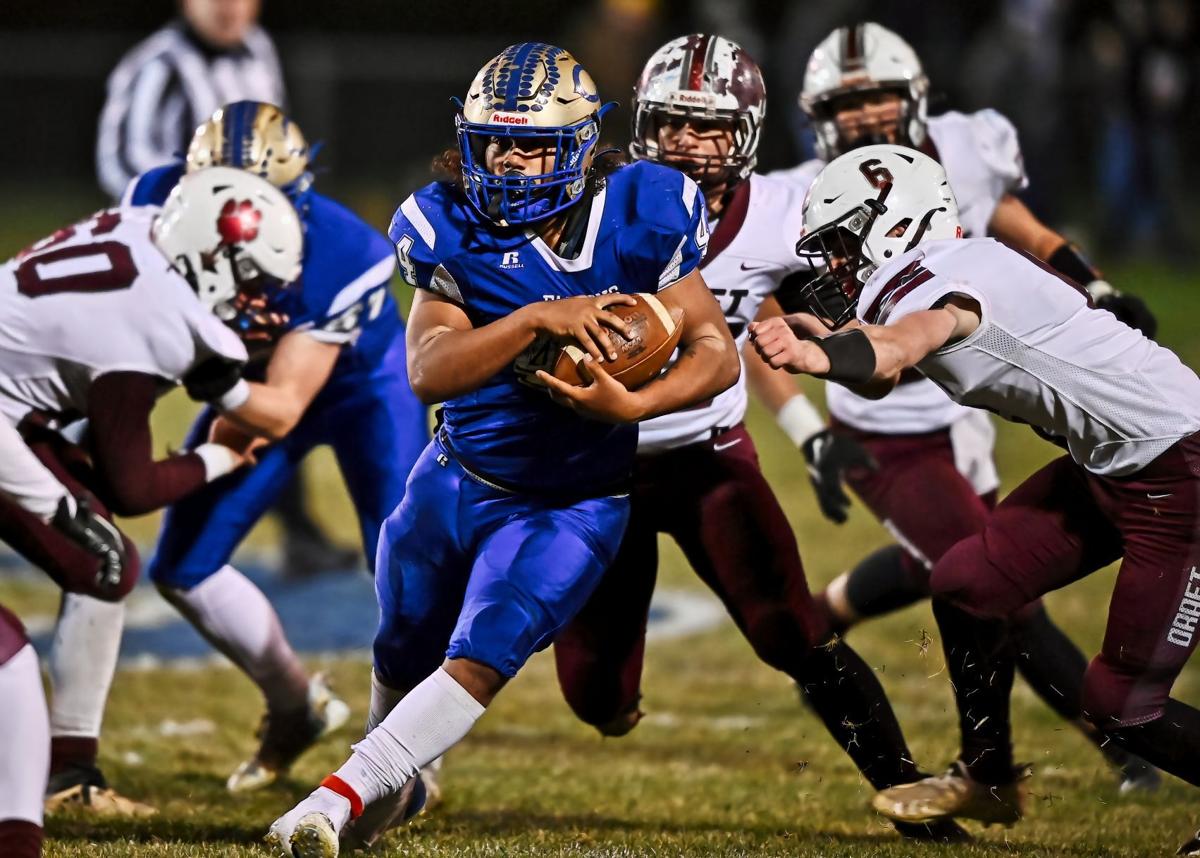 Central's Isaiah Dyer runs through the middle of Stuarts Draft's defense on Friday night in Woodstock. Dyer finished with 108 yards on 32 carries to lead the Falcons to a 21-6 win in the Region 2B final. 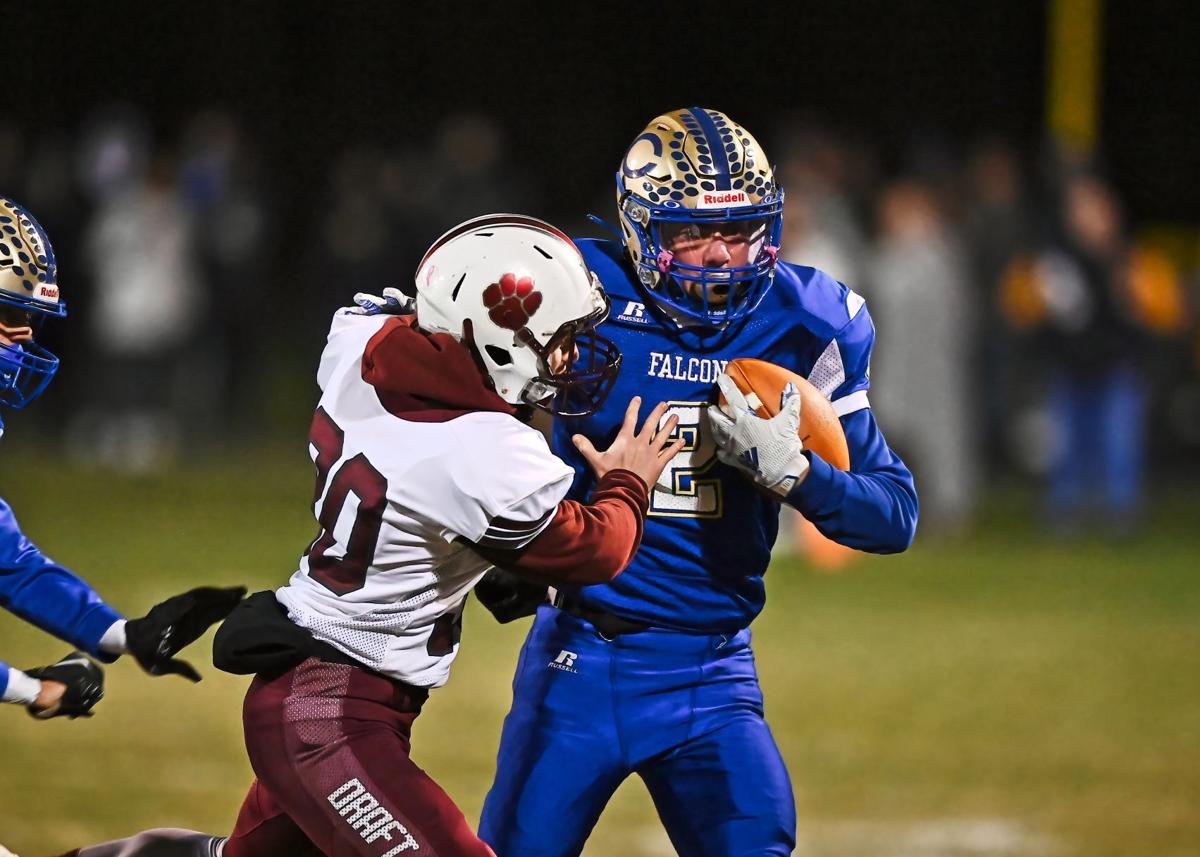 Central’s Luc Retrosi (2) dodges a Stuarts Draft defender on Friday in Woodstock during the Region 2B finals. The Falcons won the program’s first-ever regional title. 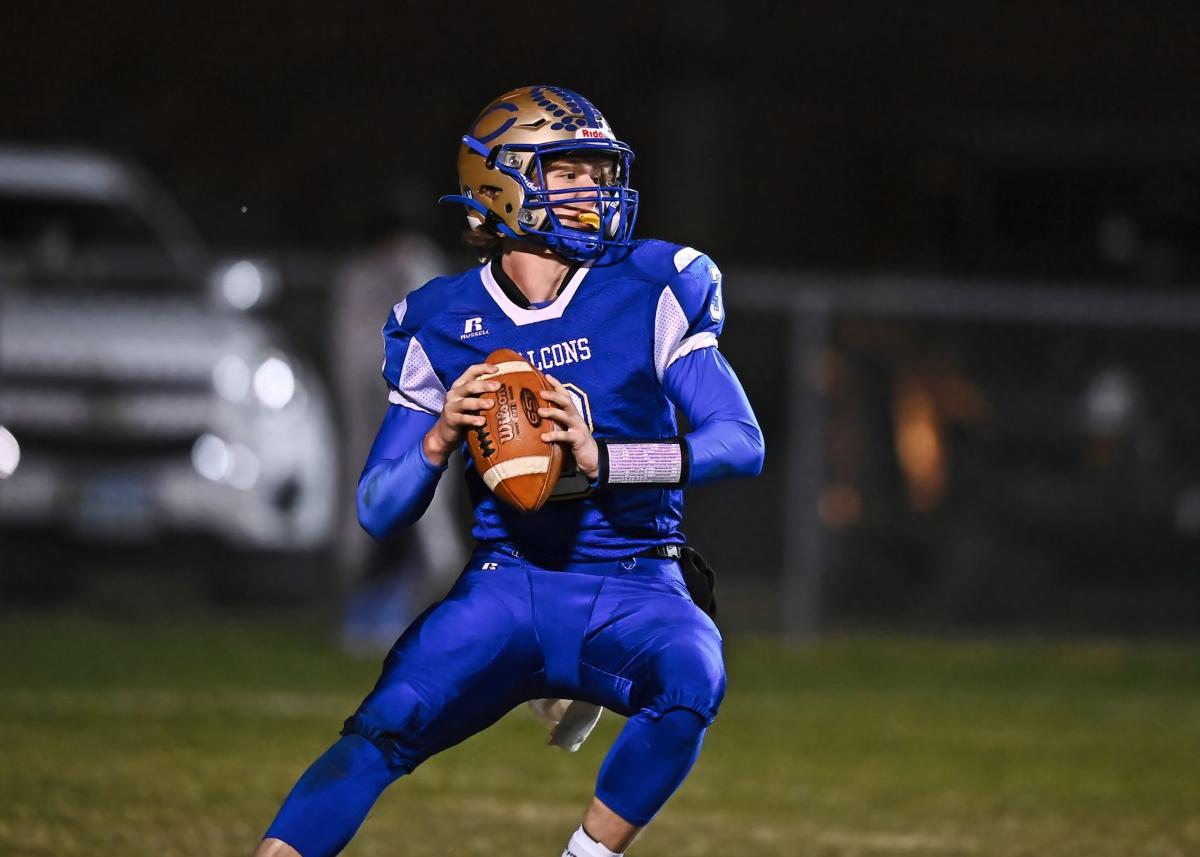 Central senior quarterback Ashton Baker looks to make a pass during Friday’s game against Stuarts Draft in Woodstock. The Falcons topped the Cougars 21-6 to advance to the Class 2 state semifinals for the first-time in school history. 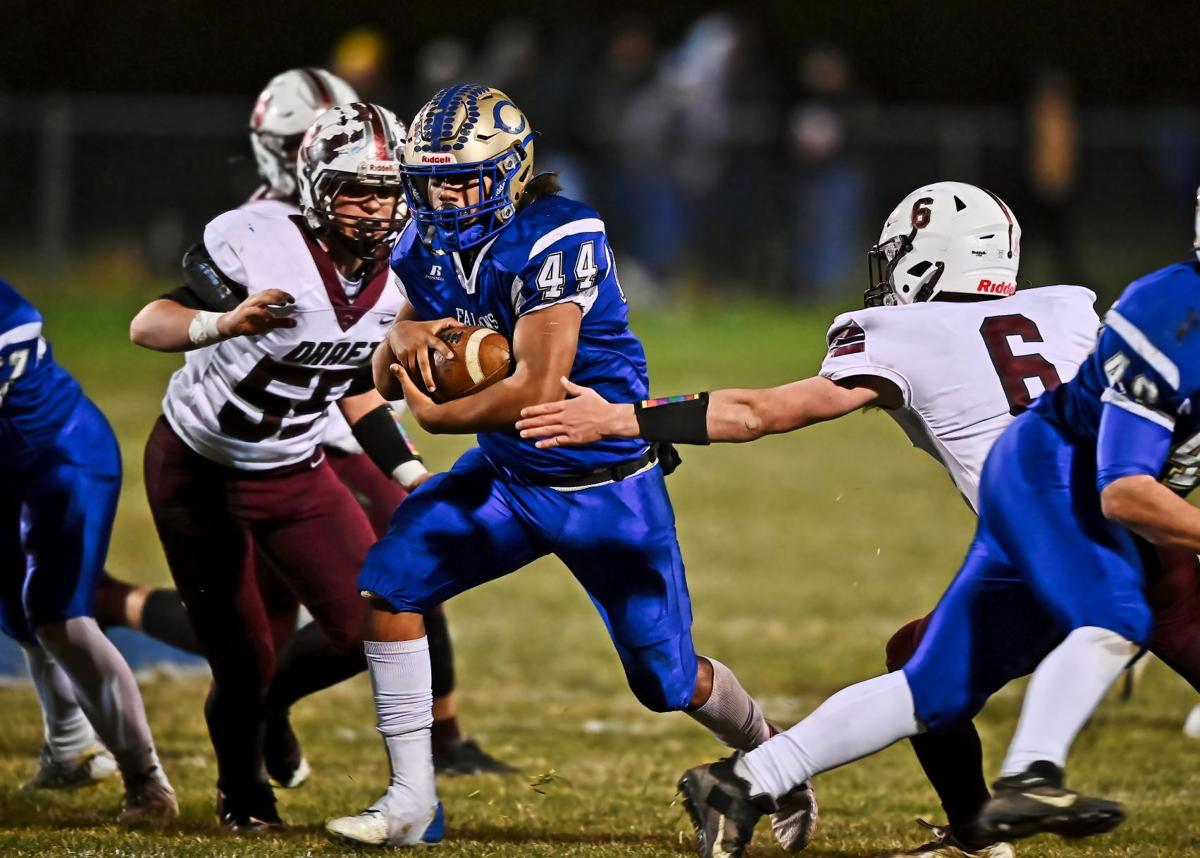 Central’s Isaiah Dyer (44) runs through a hole against Stuarts Draft on Friday in the Region 2B finals in Woodstock. The Falcons won, 21-6.

Central's Isaiah Dyer runs through the middle of Stuarts Draft's defense on Friday night in Woodstock. Dyer finished with 108 yards on 32 carries to lead the Falcons to a 21-6 win in the Region 2B final.

Central’s Luc Retrosi (2) dodges a Stuarts Draft defender on Friday in Woodstock during the Region 2B finals. The Falcons won the program’s first-ever regional title.

Central senior quarterback Ashton Baker looks to make a pass during Friday’s game against Stuarts Draft in Woodstock. The Falcons topped the Cougars 21-6 to advance to the Class 2 state semifinals for the first-time in school history.

Central’s Isaiah Dyer (44) runs through a hole against Stuarts Draft on Friday in the Region 2B finals in Woodstock. The Falcons won, 21-6.

The top-seeded Falcons used a stifling defense and their power run game to knock off second-seeded Stuarts Draft, 21-6, and win their first Region 2B football title. Central advances to the Class 2 state semifinals for its first-ever state berth in school history as the Falcons will host King William next Saturday at 2 p.m.

"This is the greatest feeling ever," Central senior lineman Christian Ross said. "Central's never done this before. And having this feeling with (Central head) coach (Mike) Yew, and all the excitement leading up this week and all the weeks this year and being the underdogs all year. It's definitely something crazy -- what we just did."

Yew said it was a special feeling and he was proud of the entire team.

"It's priceless," Yew said. "I've been a part of Central High School watching my brothers play since 1977, and this is the first one -- and it's awesome."

Things didn't start off as well as the Falcons would have liked. Stuarts Draft put together a solid opening drive. The Cougars moved the ball 54 yards in nine plays, but then things fell apart. Twice the Cougars had a touchdown called back due to penalties, which eventually moved them back to the Central 45 and forced them to punt.

Central's offense didn't start much better as they were forced into a three-and-out.

"Like normal we were a little rough on defense (to start)," Central senior running back/linebacker Isaiah Dyer said. "Just getting used to things, playing a new team, trying to get in a rhythm. After that our defense really stepped it up."

"Momentum just slowly started switching when we started driving the field," Dyer said. "A couple big runs, the O-line was working their butts off creating the seams, and I was just hitting the seams. We could tell they were getting frustrated a little bit, and the O-line was just dominating up front."

The Falcons recovered the ensuing kickoff, but Stuarts Draft's Izaiyah Ale Bell intercepted an Ashton Baker pass with 2:11 left in the half. The turnovers continued on the very next play as Central junior defensive lineman Gaige Lewis recovered a Stuarts Draft fumble.

The Falcons drove to the Stuarts Draft 5, but they fumbled in the final minute of the half.

Central added to the lead on the first drive of the second half. They put together an eight-play, 54-yard drive. Central sophomore fullback/linebacker Tyler Forbes powered through several tacklers for an 8-yard touchdown run and a 14-6 lead with 8:28 left in the third quarter.

"I got the ball and I had tons of guys on me, but I still kept running," Forbes said. "It felt great."

That was more than enough points for Central's defense. The Cougars like to run the ball, but the Falcons slowed down the running game.

Ross said they made some adjustments on defense at halftime and it worked. The Cougars had only 67 yards rushing in the second half. A big key coming into the game was who could win the battle up front and Ross said he was happy with how the offensive and defensive lines performed.

Yew said the defense did exactly what they were supposed to do.

"We flew to the ball, we made some things happen," Yew said. "We got some turnovers in key places. And we knew we had to attack the middle. We had to take their running game away and eventually we forced them to run to the sideline or throw the ball. And we were able to get them to start throwing the ball a little bit. And we take pride in our secondary. We feel like we have a pretty good secondary, and they certainly made some plays when they needed to."

It was an interception that set up the final score for Central. Senior linebacker/tight end Jacob Walters intercepted a pass by Stuarts Draft freshman quarterback Landon Graber. Walters returned the interception 30 yards for the score, but the touchdown was called back due to a penalty on the return.

"We know (Stuarts Draft's Aaron Nice) is a great player, and my read all week is just to stick to him like glue," Walters said. "And I saw him leaking out for the screen, and I just stepped up and it came to me. And I just took off."

Forbes capped off the nine-play drive with a 1-yard plunge and give Central a 21-6 lead with 1:57 left.

The Falcons held Nice, the Cougars' top running back, to 101 yards on 15 carries. His longest run of the night was 16 yards.

Central was led offensively by Dyer with 108 yards rushing on 32 carries. Baker threw for 106 yards, completing 7 of 12 passes.

The Falcons have now won eight straight games. Walters said it hadn't sunk in what the Falcons accomplished by knocking off the two-time reining region champs.

"It's a different type of feeling," Walters said. "I don't think it's fully set in for me yet. I'm still trying to grasp it, but when it sets in it's going to be a great feeling."

Dyer said it's a special feeling to do it with the teammates he has.

"It feels amazing," Dyer said. "You can never really explain this feeling until you actually receive it. It's a good feeling, especially with this group of guys. I would never want to do it with anyone else."