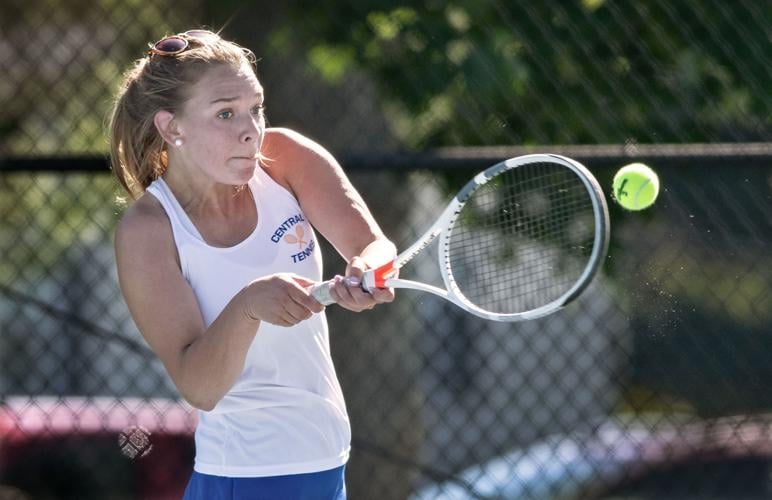 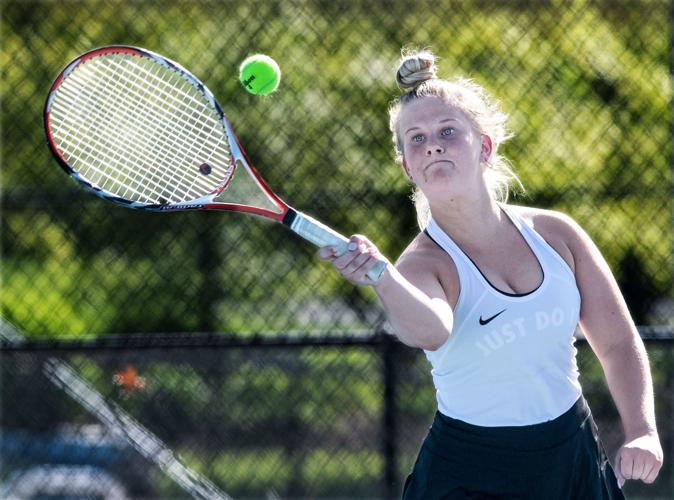 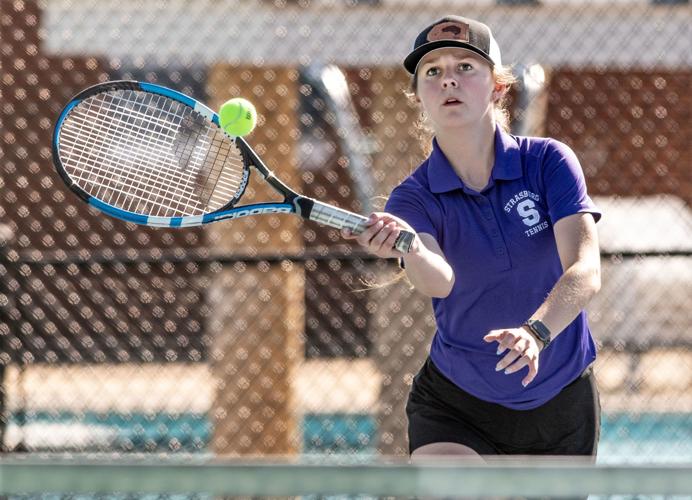 WOODSTOCK -- Erika Hutton found her game just in the nick of time.

The Central senior saved a match and rallied for a 1-6, 7-6 (4), 10-6 victory over East Rockingham's Jamison Meadows in the Bull Run District Individual Singles final on Monday.

"I knew going into it, it was going to be a pretty even match," Hutton said. "And you're just going to have to fight for it and play your best. At the beginning I was not doing that, and she was playing amazing. She was hitting the ball well. She had amazing shots. And I just told myself if I wanted to win it I was going to have to change my mindset. And believe in myself and tell myself that I can do it and I did that."

With the title, Hutton advanced to the Region 2B tournament on May 23. She advanced along with Meadows and Mountain View's Mya Councill, who beat Strasburg's Raea Crabill, 6-1 7-6 (2) to win the third-place match.

"Coming into the (third-place) match, I was thinking you're either going to go home with something or nothing with all the work you've been doing," Councill said. "So I just gave it my all until the end."

The top-seeded Hutton and second-seeded Meadows had split their regular season matches, with each winning 8-5 at home.

On Monday, Meadows came out strong and took the first 6-1 in 23 minutes. Things didn't look much better for Hutton to start the second set.

She went down a break of serve and trailed 3-1. It appeared she might go down two breaks when she fell behind 15-40 on her serve in the fifth game of the second set.

An unforced error and a forehand winner from Hutton brought the game to deuce. After two more unforced errors from Meadows, Hutton had held and trailed 3-2.

"It did give me some momentum," Hutton said of the hold of serve. "I just went game-by-game, point-by-point. I just told myself after every point that 'you can do it. You want to win this. And just play your best.' And I think that really helped."

Meadows broke Hutton's serve again for a 6-5 lead and served for the match. Meadows had a match point at 40-30, and Hutton said she knew she had to keep playing her game.

"I told myself 'this is match point, and if you want to win you're going to have to do something about it right here,'" Hutton said. "I knew that in my head. I tried not to focus on it once she sent that serve and just played my best and tried to get the ball in."

Hutton got off to a quick start in the tiebreaker. She built leads of 4-1 and 6-2 and won the tiebreaker 7-4 on a Meadows' unforced error to finish off the 57-minute set.

A new Virginia High School League rule this year is that instead of third sets a super-tiebreaker (which means they play first one to 10 and wins by 2) will be played. This is to shorten the matches.

Hutton said she tried to have the same mindset for the second set tiebreaker and the third set super-tiebreaker.

"My mindset, I was just telling myself not to be nervous, don't play scared," Hutton said. "You just need to play your game. I knew I'm a great player. And if I just played my game and hit the ball how I hit the ball that I was going to get a good outcome."

Hutton got off to a fast start again, building the lead to 5-2. Meadows cut the deficit to 6-4. But Hutton came back with a Meadows' unforced error and a service winner for an 8-4 lead. She finished off the one-hour 22-minute match with a big forehand winner.

"It feels good," Hutton said of being district champion. "I've been thinking about this all season, and I think about (being) regional champion too. And it's probably going to be me and her again. And we'll see each other again, and we'll see how it goes. Playing this time gave me more experience. I got to know more about how she plays. So hopefully that will help me when we play again."

Central head coach Matt Smith said he was really pleased with Hutton for her fight and determination.

"It was an unbelievable match," Smith said. "It takes a special kind of determination of an individual to come down and not accept defeat, and hang tough and to really tough it out and pull ahead at the end. I'm super proud."

Councill had a tough, hard-fought day. The third seed had to play three matches. In the quarterfinals, Councill beat sixth-seeded Page County's Summer Knight, 3-6, 6-1, 10-8. She then lost to Meadows 6-2, 6-0 in the semifinals.

Strasburg's Crabill, the fifth-seed, topped fourth-seeded Clarke County's Ryleigh Webster, 4-6, 6-0, 10-7 in the quarterfinals. Crabill lost to Hutton, 6-0, 6-1 in the semifinals.

Because Region 2B has teams in three different districts, two of which only have one Region 2B squad, the Bull Run District qualifies three individuals and teams to the regional tourney.

Councill was on the court the longest on Monday with a one-hour 39-minute quarterfinal match and a 54-minute semifinal match. She said she had extra motivation going into the day.

"I really felt like coming out today that I had to make a difference for our team," Councill said. "I feel like I have a lot on my shoulders being the No. 1 (singles player) this year. And I was new to (tennis) last year. So just to have improved so much really helped, and having so many people to support me really helps me."

Councill won the first set over Crabill, 6-1, in 24 minutes. Crabill took a 5-2 lead in the second set, but Councill battled back with four straight games for a 6-5 lead.

Councill served for the match at 6-5, but Crabill broke back and forced a tiebreaker.

Councill lost the first two points of the tiebreaker, but then rattled off seven straight points to secure a regional berth.

Crabill said she was still proud of how she did on Monday.

"I wasn't expecting to win the first one," Crabill said. "So I was impressed that I did win it. It was fun. It was a good experience, I get to learn a lot."

Councill said she's happy to be advancing to the Region 2B tournament, which will be held at East Rockingham on May 23.

"I'm excited, but also a little nervous considering this is my first year (at No. 1) singles," Councill said. "And I haven't had a lot of practice at it."

All the players were scheduled to return to action on Tuesday for the Bull Run District Individual Doubles Tournament held at Mountain View's New Market Park courts.