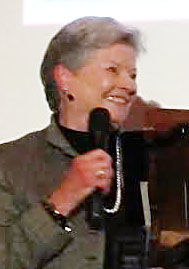 WOODSTOCK — The Shenandoah County Chamber of Commerce rolled out the red carpet for its new members, the board of directors and award nominees on Thursday evening at its annual awards ceremony.

Chamber members got the Hollywood treatment in Woodstock’s Community Theatre as the chamber recognized businesses, nonprofits and organizations with awards after they received a total of 50-some nominations in various categories.

Melissa Hooser, with tears in her eyes, had to pause as she said she is thankful for the hard times she has gone through, which have only made her stronger.

“This was a dream of mine starting this business,” Hooser said.

Route 11 Potato Chips won the 2019 Large Business of the Year.

The company, which focuses on high-quality kettle-cooked potato chips, started in Middletown in 1992. A new facility was built in Shenandoah County in 2008 and now employs 49 people. Route 11 markets its chips everywhere, from farm markets, specialty delis, cheese shops, cafes and grocery stores across the United States.

“I always had a dream of winning an academy award. I must say this feels better,” said owner Sarah Cohen. “It is the county and the community here that has made it possible to get to this level. Thank you.”

Shenandoah Caverns won a new award for the 2019 Tourism Business of the Year and Jon Henry, owner of the Jon Henry General Store, won in the new category of Chamber Award of Excellence: Young Professional.

Joan Comanor won the award for 2019 Citizen of the Year.

Comanor served as the first female deputy chief in the U.S. Forest Service and retired after a long career in the federal government promoting the importance of natural resources, continuing to offer her knowledge in agriculture, land-use, and natural resource conservation.

“I am totally shocked,” Comanor said.

She said everything she has done has been a labor of love but it has not been labor (work).

Powell had a 23-year career as an Army officer, serving two tours in Vietnam as an aviator. He finished his career with the Army Corps of Engineers. After he retired, Powell served the community through his work with the Shenandoah County Chamber of Commerce, the Lions Club of Woodstock, Woodstock Presbyterian Church, and many veterans organizations, Wade Zirkle, who presented the award, said during the ceremony.

Accepting the award on his behalf was Powell’s wife Judy Powell.

“Ray was energized by working on projects that bettered the community,” she said.