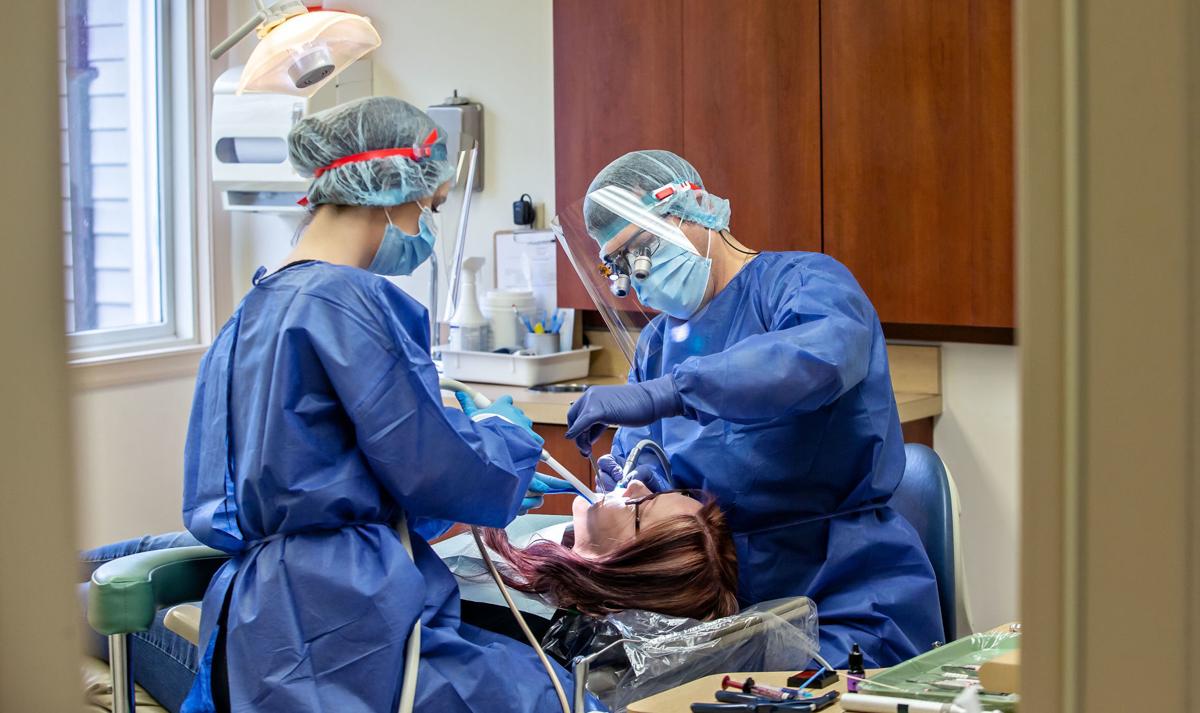 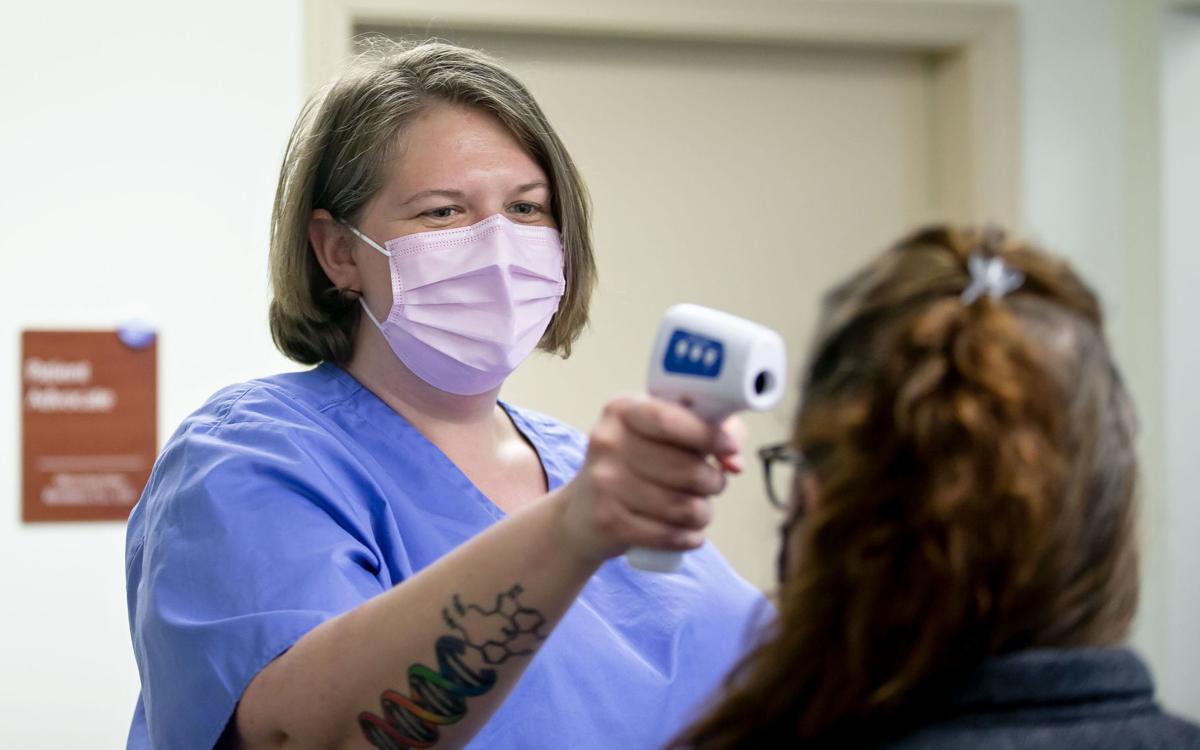 Natalie Gazzarra, medical office manger at the Shenandoah Free Clinic, takes a temperature reading of each person entering the facility to flag any potential COVID-19 symptoms.

Natalie Gazzarra, medical office manger at the Shenandoah Free Clinic, takes a temperature reading of each person entering the facility to flag any potential COVID-19 symptoms.

“It’s just been a struggle to keep the patients and the staff safe as much as we can,” she said.

One of the biggest impacts of the pandemic has been limiting the number of patients on-site and not allowing family members in with patients.

“It used to be a friendly family environment,” Davies said.

But while things may look different, she said one of the clinic’s big successes was that it kept on going.

“We’ve been open, and I think that’s been important to the patients,” she said. “We didn’t close down.”

Keeping up with the trends of the pandemic has been “a bit of a roller coaster,” said Pam Murphy, executive director of the Shenandoah County Free Clinic and Shenandoah Dental Clinic in Woodstock.

In the initial days of the pandemic, everything “escalated so quickly,” she said.

In addition to stockpiling enough personal protective equipment such as masks, gloves and face shields, she said adopting telehealth offered big changes to the Northern Shenandoah Valley and beyond.

“Health care has been changed so dramatically by telehealth,” Murphy said.

No one else in the region is doing that, she remembered someone telling her at the time.

“I betcha they’re gonna be,” she recalled saying.

When the pandemic started a year ago, Murphy was one of the first health care professionals in the area to try to get ahead of it.

After a staff meeting with clinic employees and volunteers in February 2020, she started looking for N-95 masks before they would inevitably disappear from store shelves around the region.

“I want to have a plan,” she recalled thinking. “I want to make sure we have the stuff.”

At the time, the clinic had a dozen masks, she said. “We were prepared for normal infectious disease.”

But she knew that wouldn’t be nearly enough.

She spent that first weekend searching the area’s home improvement stores to buy masks, but she recalled the staff getting concerned that even a couple dozen wouldn’t be enough. She recalled the fear that the staff and volunteers felt not only for themselves and their loved ones but also in providing for the families they served.

“We were having meetings almost daily,” Murphy said.

They spoke of extra precautions to take the following day, with assurances like ”Starting tomorrow, we’re going to do this now.”

They implemented ultraviolet rays at the clinic, to “completely obliterate any germs.”

The dental clinic has since purchased various tools and other equipment that keeps employees safer by absorbing some of the air people breathe while onsite.

People don’t come to the dentist knowing they’re sick, Murphy explained, but so many people had the potential of carrying the virus without knowing it.

With many of its volunteers older and among high-risk populations, Murphy said the clinic sent its 15 volunteers home, operating with its 17 paid staff and a couple of volunteers who could work from home. Staff sometimes shifted into more necessary roles while schools were closed and the dental clinic was holding limited hours.

St. Luke has also operated without its volunteers, focusing instead on its eight paid medical staff and part-time dentist.

“We’ve lost a lot of our volunteers. A lot of them aren’t coming back,” Davies said.

For the first three months, she said the dental clinic shut down, which she noticed was pretty much the same everywhere.

Though the Shenandoah clinic had filled some positions shortly before the pandemic, Murphy said it later turned over a couple of positions.

One psychiatric practitioner liked telehealth so much that she opted to leave the clinic and start a private practice, Murphy recalled.

“I don’t think anyone could underestimate the level of anxiety that some of these folks had,” she said.

Another change came in the new patients the clinic picked up, particularly on the dental side when area residents who had postponed procedures or other appointments with their family dentist called when the situation reached emergency-level.

The emergency room has never been set up to handle dental problems, Murphy said.

A doctor can prescribe pain medication, Murphy said, but “that doesn’t fix it, it only postpones it.”

People were calling in that their family dentist was closed, she recalled.

The clinic staff “wanted to be there for the community,” Murphy said. “You may not meet our criteria normally, but we’re gonna help you.”

In Front Royal, Davies hasn’t noticed an influx of new patients, but she said one major change is that the clinic now accepts new patients anytime instead of only on Thursday evenings.

“They should be able, if they’re sick, to come in any day of the week,” she said.

Both clinics offer mental health services, and Murphy said counselors were a blessing during the pandemic, particularly since about 80% of them could offer telehealth.

Those who normally work in schools needed to know which children had the technology to allow them to call their health provider, and she said the school system helped the students access their school Chromebooks and the software necessary for telehealth appointments.

“Those counselors were a lifeline,” Murphy recalled families telling her.

“We’re very grateful that happened,” she said. “Quite a bit of it still is telehealth.”

Despite the financial difficulties plaguing communities during the pandemic, Davies and Murphy said their clinics received an outpouring of support.

“I was surprised … They’ve opened their pockets to the community,” she said. In fact, “I think individual donations have increased.”

Murphy said a Payment Protection Program loan helped the Woodstock clinic supplement staff salaries and that several agencies, including Valley Health, the Shenandoah Community Foundation and some national aid agencies who work with countries overseas contacted the clinic to send personal protective equipment, “to help keep us protected and/or [send] some extra money.”

They also received money from the state dental agency.

Now, she said, the medical clinic is getting closer to where it was before the pandemic, though she said some of the delay has been from people postponing seeing a doctor about issues they don’t think are urgent.

Through the pandemic, it was kind of quiet, she said, given that they’re a part-time clinic.

“The dental clinic has been booming since they went back to full steam,” she said. Now they’re “booked out a couple months.”