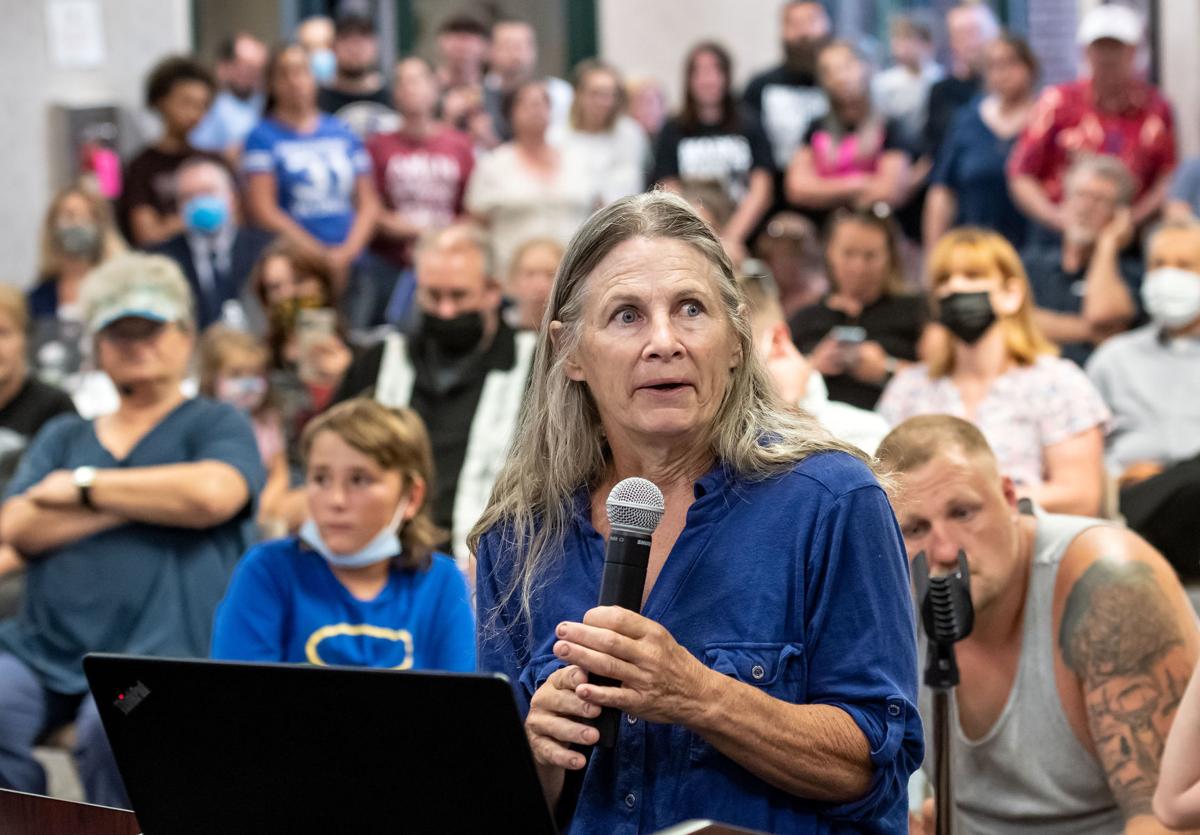 Mount Jackson resident Karen Kwiatkowski addresses the Shenandoah County School Board on Thursday night. Many local residents spoke to the board about the new mask mandate. 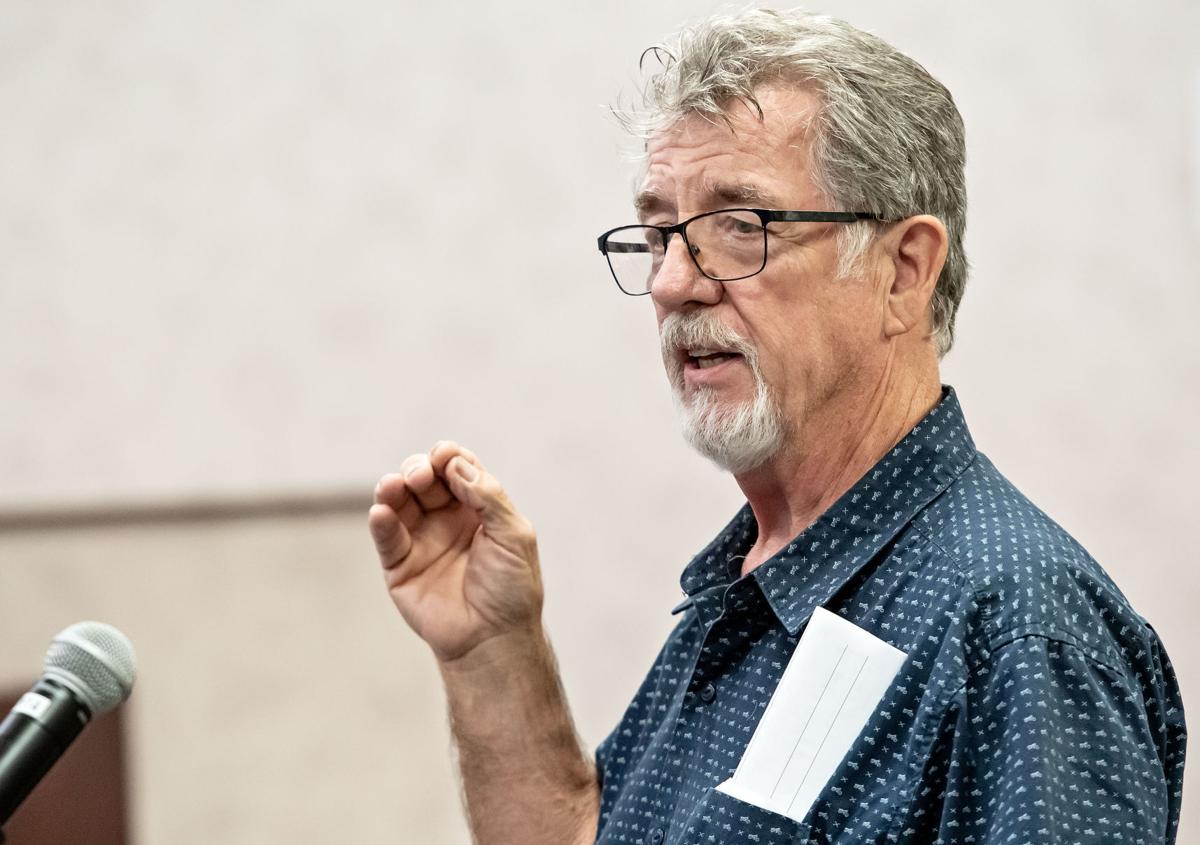 Kenneth Cruise, of Maurertown, addresses the School Board.

Mount Jackson resident Karen Kwiatkowski addresses the Shenandoah County School Board on Thursday night. Many local residents spoke to the board about the new mask mandate.

Kenneth Cruise, of Maurertown, addresses the School Board.

WOODSTOCK – Students, parents and community members spoke at a 3 1/2-hour Shenandoah County School Board meeting on Thursday night against the mask mandate for all schools, which was ordered by Virginia Governor Ralph Northam earlier in the day.

There were 43 speakers on Thursday night either in-person or virtually and most of them spoke about masks being required in county schools. The board room was filled to capacity and more people protested outside the building.

Of all the speakers, it may have been Central High School student Jordan Shoemaker who garnered the most applause from the boisterous crowd.

“I have an autistic little brother, 6 years old, non-verbal,” Jordan said. “He comes home sweating and (he’s out of breath) all the time. He cannot breathe in those masks. He’s basically not allowed to do anything. If I could hear him I would help him. But it’s going to hit me the hardest, because every day when I see him when I get home his face is red, he’s sweating, he’s panting and he just needs like a drink or something. So you give him a drink – it doesn’t help. It’s these masks.

“...If my little brother has to keep on going like that, it’s going to just tear me apart. And I can’t see him like that anymore.”

Harley Robertson, a student at Central, said she suffers from anxiety and asthma, which make it difficult for her to wear the masks all day.

“With my anxiety and asthma, when I put on a mask I feel like I am drowning and I can’t breathe,” Harley said. “Please give us a choice and save us from drowning.”

Harley’s mother, Crystal Robertson, said that she worries constantly through the day that her daughter will have a panic attack or an asthma attack wearing the mask at school.

Sarah Morey said her son goes to Central and he also has anxiety and she worries about what wearing a mask is doing to him. She said the kids are hurting.

Destiny Ogle, a sophomore at Central, is part of a group of students who have been protesting at Central all week.

Destiny spoke at the meeting and said they just want a choice.

“Do you like masks?,” Destiny asked. “Can you hear when people talk to you when you have them on? Can you breathe with them on, because I know I can’t. Masks are government-controlled. As much as you guys want to keep us safe, you guys are also hurting us.

“...We’re not asking for something so big, we’re asking for options. We’re asking for a choice, a choice to make masks optional. If you wish to wear masks it’s 100% on you. We have stood in the rain and kept ourselves from school. If you want change, you have to be the change and right here’s where it starts.”

Shenandoah County Public Schools Superintendent Melody Sheppard said they are allowing students at Central to protest outside the building each day.

“They continue to protest and we are monitoring them from afar,” Sheppard said after Thursday’s meeting. “We are giving them a safe place for them to continue to protest. As long as it’s pleasant and everybody is getting along then we are willing to let them do it.”

Sheppard said they are getting their school work, either someone brings it out to them or they go and get it at the office at the end of each day.

She said there may come a time when they ask them to move along and they know it would be best if they were inside the school instead of outside.

“We would like to have them come back in-person because we know that’s valuable to them,” Sheppard said.

Some of Thursday’s speakers asked the School Board to consider going back to the hybrid model they were in last year so students and parents would have a choice of going virtually.

“Virtual learning was good for my children,” Patricia Lopez said. “You can look at their school records. They were all A-B honor roll their freshman year of high school, why? Because of virtual learning. I know not everybody likes it – I get that. For me, I like it.

While most everyone was against the mask mandate there were a few in favor of it.

Bill Scott said the law is there to protect everyone.

Several speakers urged the board to go against the mandate and take it to court if necessary.

“You all have an option,” Mike Rickard said. “All of us have your back. You guys can stand up to the governor. ... Just use your common sense. Stand up, we got your back. We voted you in, we’ll vote you back in. But stand up for the people. If that little boy (Jordan Shoemaker) can come up here and advocate for his 6-year-old brother that’s autistic, you guys can stand up for the rest of the county.”

In her closing comments at the end of the meeting, School Board member Michelle Manning asked the community to not give up on them.

“I think it’s important for the community to know that there has been much going on behind the scenes,” Manning said. “The fact that we opened schools with masks strongly recommended should send a message to everyone that we are not just falling in lock step with whatever comes down from Richmond. We actually were really grateful for the opportunity to use our local data and tailor what we wanted to do with that. I’m not going to lie I’m a little disheartened that that was taken away from us.”