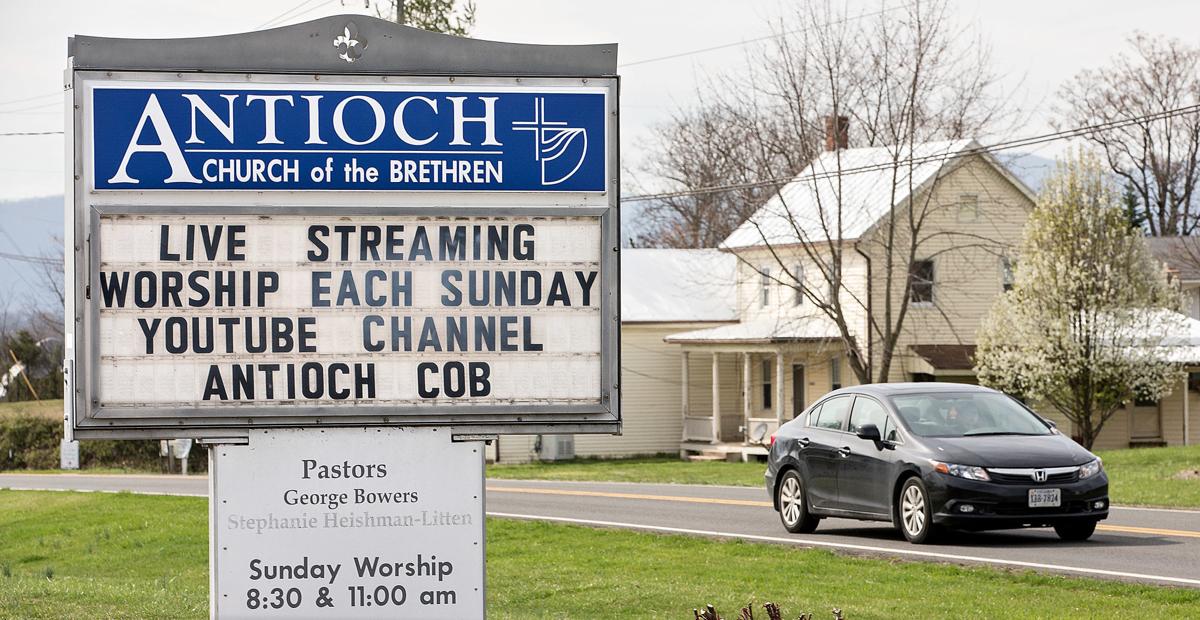 Antioch Church of the Brethren advertises its YouTube channel outside the church on Senedo Road west of Woodstock. Places of worship have turned to the internet and other ways to hold services and keep in contact with congregations amid the coronavirus pandemic. 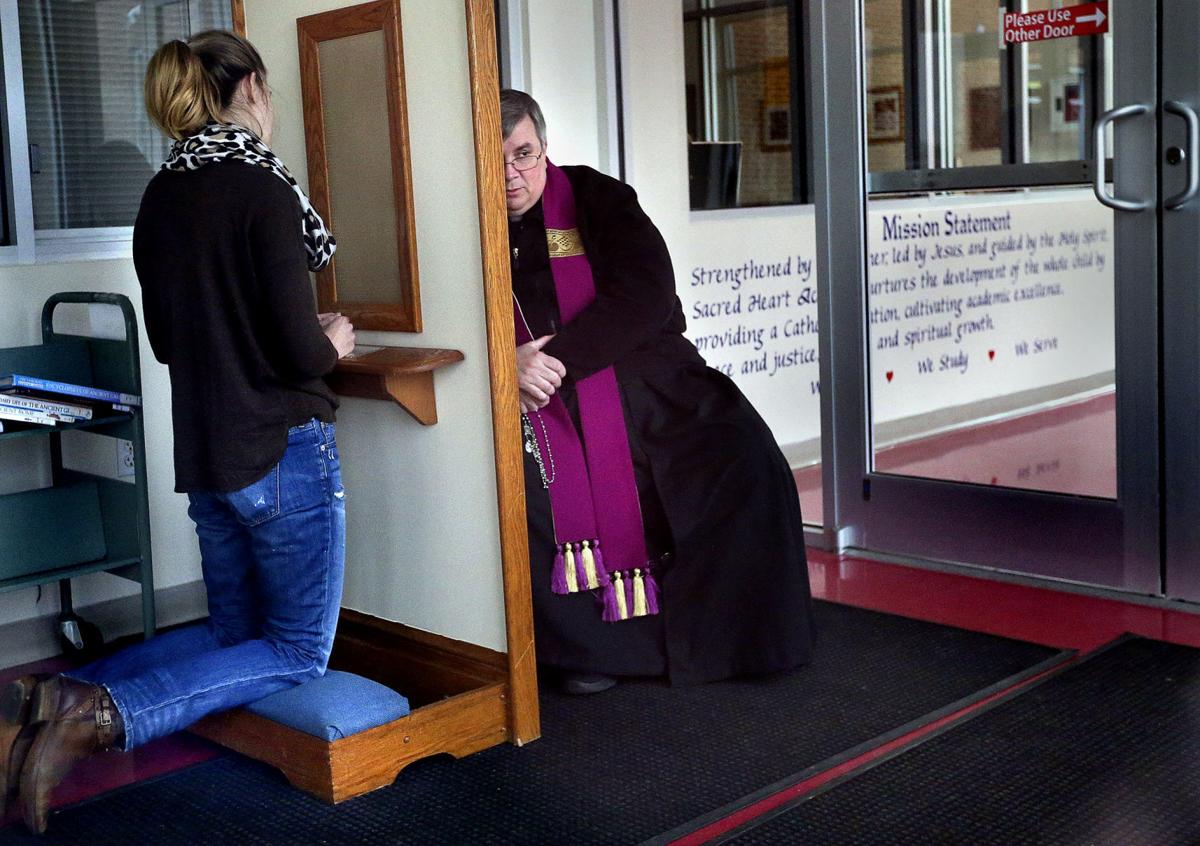 The Rev. Stephen Holmes, parochial vicar at Sacred Heart of Jesus Catholic Church in Winchester, hears the confessions of a parishioner during a drive-up confession at Sacred Heart Academy on Wednesday evening. To prevent the spread of coronavirus, parishioners wait in their cars until directed to the vestibule of the school for confession. 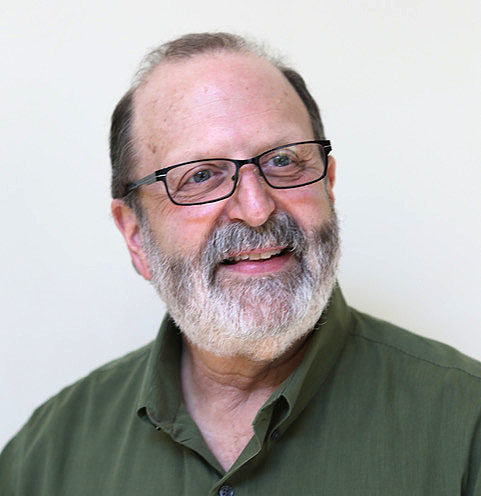 Antioch Church of the Brethren advertises its YouTube channel outside the church on Senedo Road west of Woodstock. Places of worship have turned to the internet and other ways to hold services and keep in contact with congregations amid the coronavirus pandemic.

The Rev. Stephen Holmes, parochial vicar at Sacred Heart of Jesus Catholic Church in Winchester, hears the confessions of a parishioner during a drive-up confession at Sacred Heart Academy on Wednesday evening. To prevent the spread of coronavirus, parishioners wait in their cars until directed to the vestibule of the school for confession.

Places of worship around the area have canceled services to help prevent the spread of COVID-19, and religious leaders are being creative in how they connect with the community.

Zoom meetings, Facebook Live videos and e-newsletters are quickly becoming standard for members of congregations who aren’t able to meet in person, and other intricacies of faith communities are also being included where technology allows.

Antioch Church began live-streaming its Sunday services six weeks ago. Not everyone, he said, knew about the live-streamed services in the beginning but the church is now making it more widely known.

Bennett said this avenue is new to many people but is "a great way to get [the message] out."

Church leaders decided to start live-streaming the Sunday services when a member who traveled to the Netherlands wanted to view the services while overseas.

“But we still, like most churches are, we try to make the phone calls to the ones (who are) not internet-ready or senior citizens who are not savvy on that kind of stuff,” Bennett said

At Sacred Heart of Jesus Catholic Church, 130 Keating Drive in Winchester, two of the biggest changes involve virtual streaming of the Mass so people can attend from home and “drive-through” reconciliation that members can observe in their cars.

“The bishop wanted us to have confessions available,” said the Rev. Bjorn Lundberg.

Though confessions normally take place in a confessional, with a door on one side for the priest and a door on the other for church members with a screen between them, Lundberg said using a tight space like that wouldn’t allow the church to follow social distancing advice, requiring 6 feet between people in public settings.

Instead, the church is offering confessions in the lobby area and gym of Sacred Heart Academy, as well as in the parking lot where people can remain in their car.

In the academy, he said people can remain 6 feet apart and also stand behind a screen if they prefer more privacy. Confession is scheduled for 6:30-8 p.m. Wednesdays and 3:30-5:30 p.m. Saturdays.

Online, where people have been attending the church’s Sunday Mass through Facebook Live, Lundberg has noticed visitors from as far away as California, Washington state and even Italy.

“We have started streaming Mass every day,” Lundberg said. The live video is available on YouTube and later posted to Facebook, he said.

Before this month, the church had about 30 subscribers to its YouTube channel. Now it has about 430.

“Admittedly there’s so much going on,” said the Rev. Matthew Rhodes, the rector of the church. “Things are changing so quickly, and there’s a lot [of information] to pass on.”

The church has moved its 9 a.m. Sunday morning coffee chats online as well, via Zoom — “to try to keep folks engaged,” Rhodes said.

Both churches have been making greater use of email lately, with Sacred Heart transferring its bulletin to an e-format sent out to 1,300 recipients, and Christ Church sending a weekly email to the children of the parish with activities and videos for them to watch.

“It’s written like I’m sitting there talking to the kids,” he said. Responses he’s heard from parishioners have ranged from a “thank you” with several exclamation marks to a comment he recalled that said, “This makes my heart so happy.”

Though Rhodes has issued invitations to other churches that might want to attend the Facebook Live services, he said Grace and St. Mary’s Episcopal Churches in Berryville, as well as Calvary Episcopal in Front Royal, have been using Zoom to offer workshops and prayer services.

Calvary posted a noontime prayer service this week and had 233 views and 30 comments on its recent Sunday morning Facebook Live video.

Comments included: “Thank you for sharing the light” and “You thought of nearly everything.”

As Holy Week and Easter draw nearer, Rhodes said churches are also looking for ways to incorporate more aspects of the six-week season of Lent into their virtual meeting space.

“Nothing, of course, beats the feeling of being able to sit and be with the congregation in person,” Rhodes said. But having the ability to offer online options is something that could not have happened 20 or 30 years ago, he added, calling the timing of having so much technology during the COVID-19 pandemic “a gift.”

For Maundy Thursday, on April 9, he said a traditional foot-washing liturgy is being adapted as a liturgy for hand-washing that people can do at home. He expects the church will offer a live stream of its Good Friday service on April 10.

Christ Church will also be teaming with Grace and St. Mary’s in Berryville as well as the Church of Our Redeemer in Aldie to post recorded segments by members of the congregation.

“Folks will get an increased sense of community,” Rhodes said. “It will be going church to church and home to home.”

Though the Episcopal Diocese of Virginia has canceled church services through Easter, Rhodes said whatever day members can return will be cause for celebration.

“It may not technically be Easter Sunday,” he said, “but it will certainly be Easter.”

For information on Christ Church, Millwood, call 540-837-1112 or visit facebook.com/christchurchmillwood.

Beth El Congregation in Winchester serves the greater Jewish community. The congregation kicked off its first interactive Sabbath service via Zoom on Friday night. Rabbi Scott Sperling spoke by phone earlier Friday about the need to provide the service.

He said the service is not going to be the same length as the service in the synagogue but "we’re kind of ramping up over the next couple of weeks just to let everybody get adjusted to the technology and used to being in a very different configuration than we’re used to,” Sperling said. “This is going to be, I hope anyway, a very good way, both for us to bring in the Sabbath and worship together."

“There is both anxiety, of course, but also a tremendous spirit in the congregation to not lose touch and to reach out,” the rabbi added.

Congregations across the area needed to come up with ways to continue to conduct worship services and stay in touch.

“We are all making this up as we go along,” Sperling said. “I am extremely grateful for the support within the context of the downtown clergy fellowship here in Winchester; more largely the support from our denomination and from both the national and international Jewish community.”

People in all denominations are asking each other how they can help others learn to use the technology, Sperling said.

“So much is going on to move as much as we can of our worship and study and fellowship opportunities online,” Sperling said. “One can look for blessings in every place, and while I am so sorry of course at the illness and loss of life and dislocation, I’m grateful that we have the technological tools to be able to stay in touch.”

A team of people in Beth El Congregation is making calls to elderly individuals, shut-ins or other people who need food brought to them. The synagogue serves a large area and 95 households make up the congregation, Sperling noted.

“I’m very, very grateful for the volunteer effort and to just make sure that we do our best to stay in touch during these difficult times,” Sperling said.

– Contact Josette Keelor at jkeelor@nvdaily.com and Alex Bridges at abridges@nvdaily.com