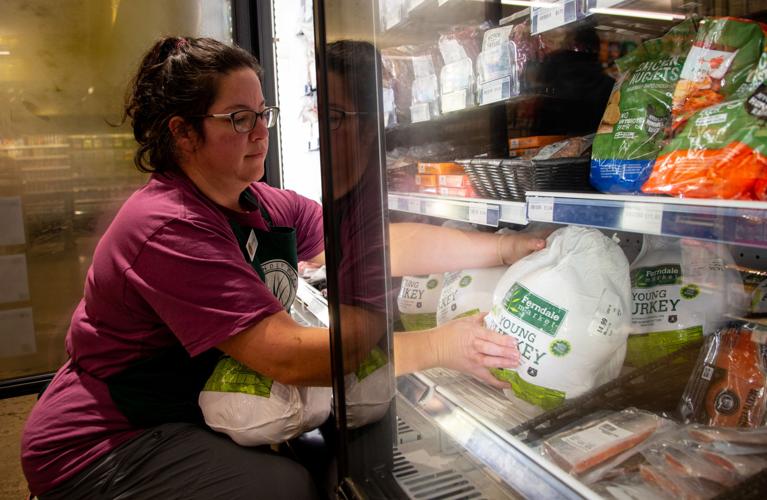 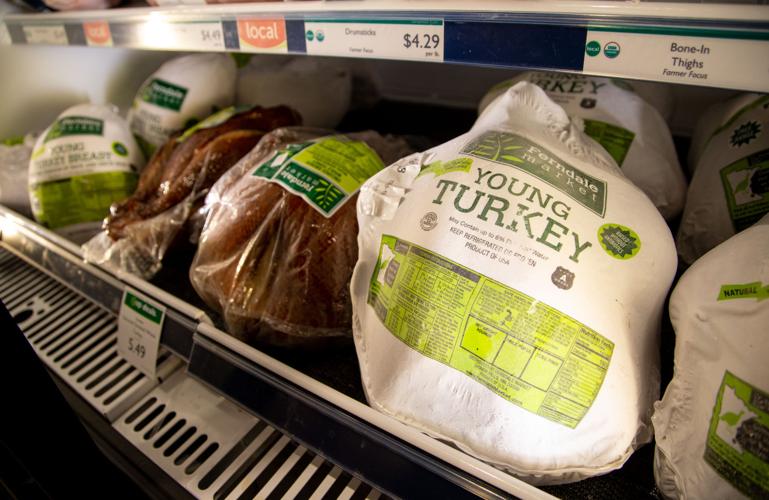 Turkeys sit for sale in a cooler at the Friendly City Co-Op Tuesday.

Turkeys sit for sale in a cooler at the Friendly City Co-Op Tuesday.

Across the nation, there have been talks about turkey shortages for this upcoming holiday season. While there is cause for concern in some states, shoppers in the Shenandoah Valley can rest assured that stores will be stocked.

How much the Thanksgiving meal will cost, however, is another question.

The cost of a 16-pound turkey this year was $28.96, which is $1.81 per pound and up 21% from last year, according to the American Farm Bureau Federation’s yearly Thanksgiving Day survey released recently.

Inflation can be seen across the table, though, not just with the centerpiece.

The cost for Thanksgiving dinner for 10 is $64.03 this year, 20% higher than last year, according to the Farm Bureau. Out of 12 food items in the study, only one decreased in price from last year.

Volunteer shoppers gathered costs across the country from Oct. 18-31 for the study, which was before many grocery stores offered sale prices.

That means shoppers who haven’t purchased a turkey yet can likely find one cheaper than the Farm Bureau average.

Regionally, the meal is most affordable in the South, according to the study.

The higher price of poultry is not unique to the food inflation consumers have witnessed over the last two years, said Hobey Bauhan, president of the Virginia Poultry Federation.

Cryan said in a press release that the supply of whole turkeys available to consumers should be adequate this year, although there may be temporary, regional shortages in some states where avian influenza was detected earlier this year.

Avian influenza hit the nation in early 2022, the first major outbreak since 2015. More than 49 million birds in 46 states have either died from the bird flu or from exposure to other infected birds, according to Centers for Disease Control and Prevention data released Nov. 3.

There were six reported outbreaks in Virginia, but none of them poultry-related, according to CDC data.

“It affected poultry flocks nationally, but we’ve been fortunate not to have any cases so far in Virginia,” Bauhan said.

Even though the avian flu hasn’t affected Virginia, grocery stores can feel the effects with their non-local orders.

Steve Cooke, general manager at the Friendly City Food Co-op, said some turkeys the store preordered last spring were bought out by larger chains. The store is waiting to hear if it will receive those orders.

Cooke said the store ordered turkeys from Minnesota and Pennsylvania.

“Local birds from sustainable farms right here in the Valley were not impacted, and we have presold all of those,” Cooke said in an email.

Farmers not only have to worry about avian influenza, but also increased prices of feed, fuel and fertilizer, according to Cryan.

David Anderson, a professor and agricultural economist at Texas A&M, told The Associated Press that the cost of corn and soybean meal used for chicken feed is rising. Ukraine is typically a major exporter of corn, and global prices have skyrocketed since losing that supply.

Despite these factors, shoppers in the Valley should have no problem securing a turkey for their Thanksgiving dinner.

According to representatives at Food Lion and Martin’s grocery store, stores will be stocked with turkeys.

“Regarding costs, while we, like others in our industry, are seeing price increases due to continued increased demand and a stretched supply chain among other factors,” McLaughlin said in an email.