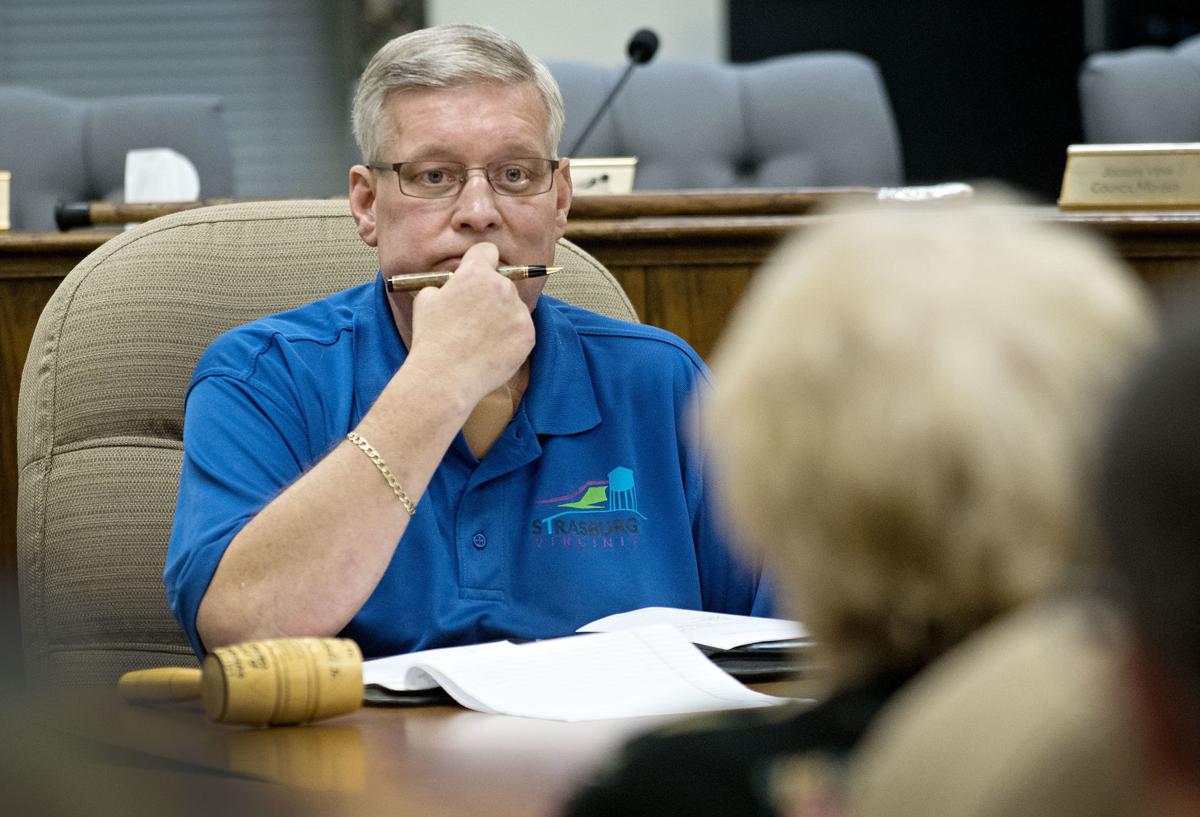 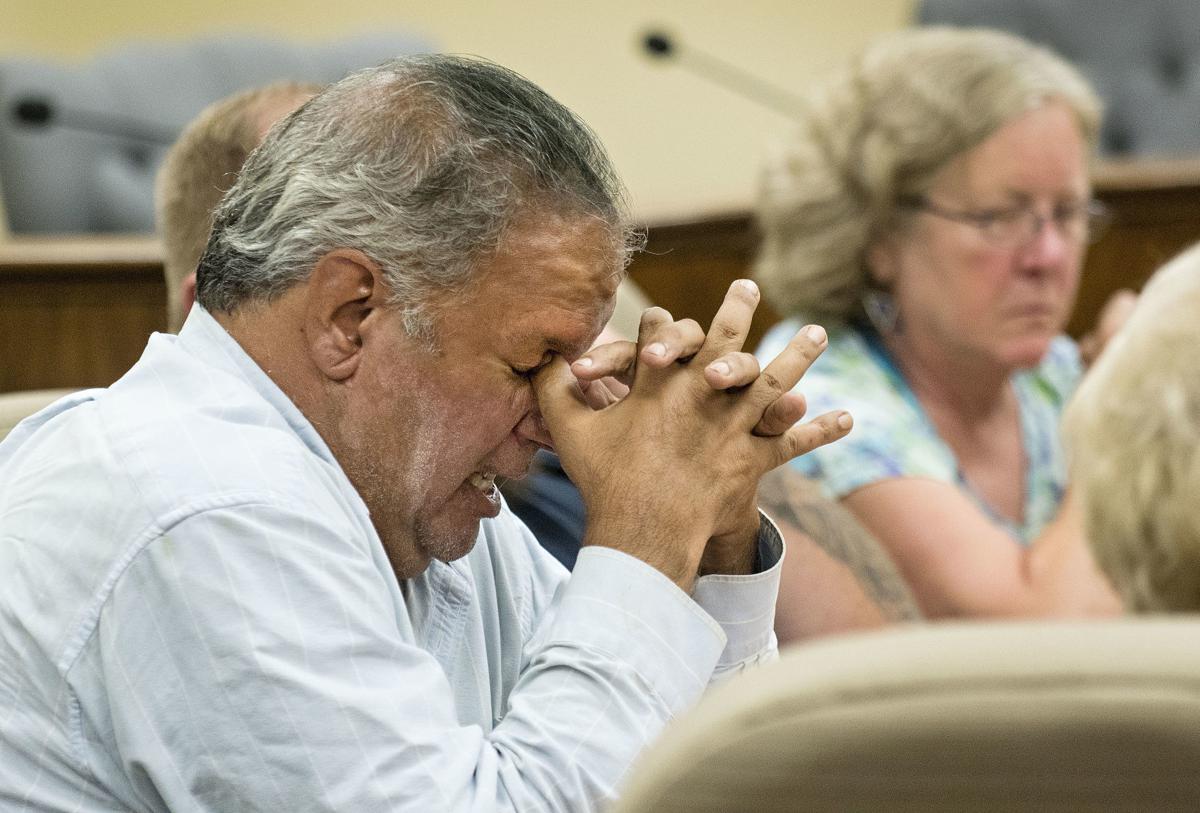 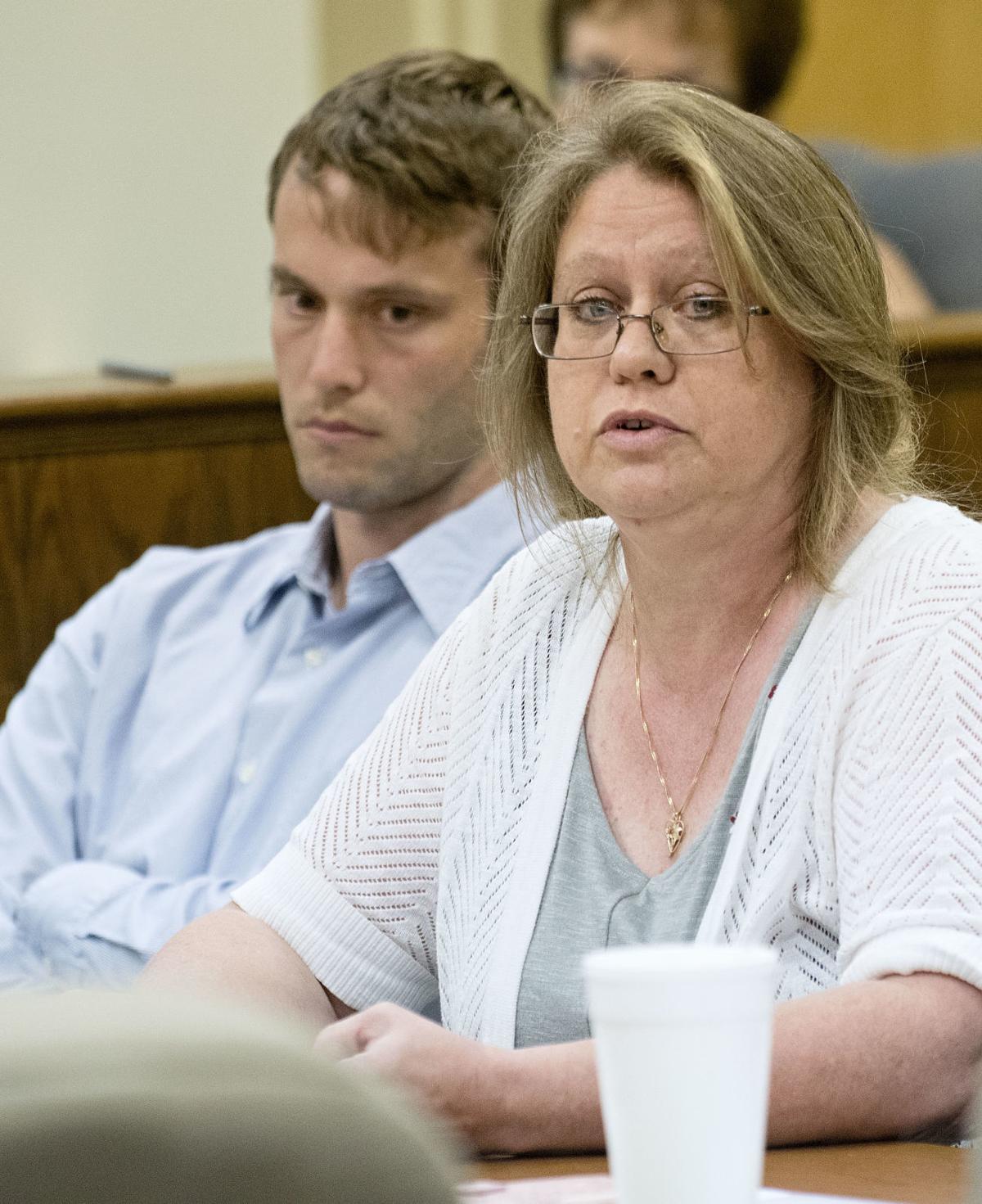 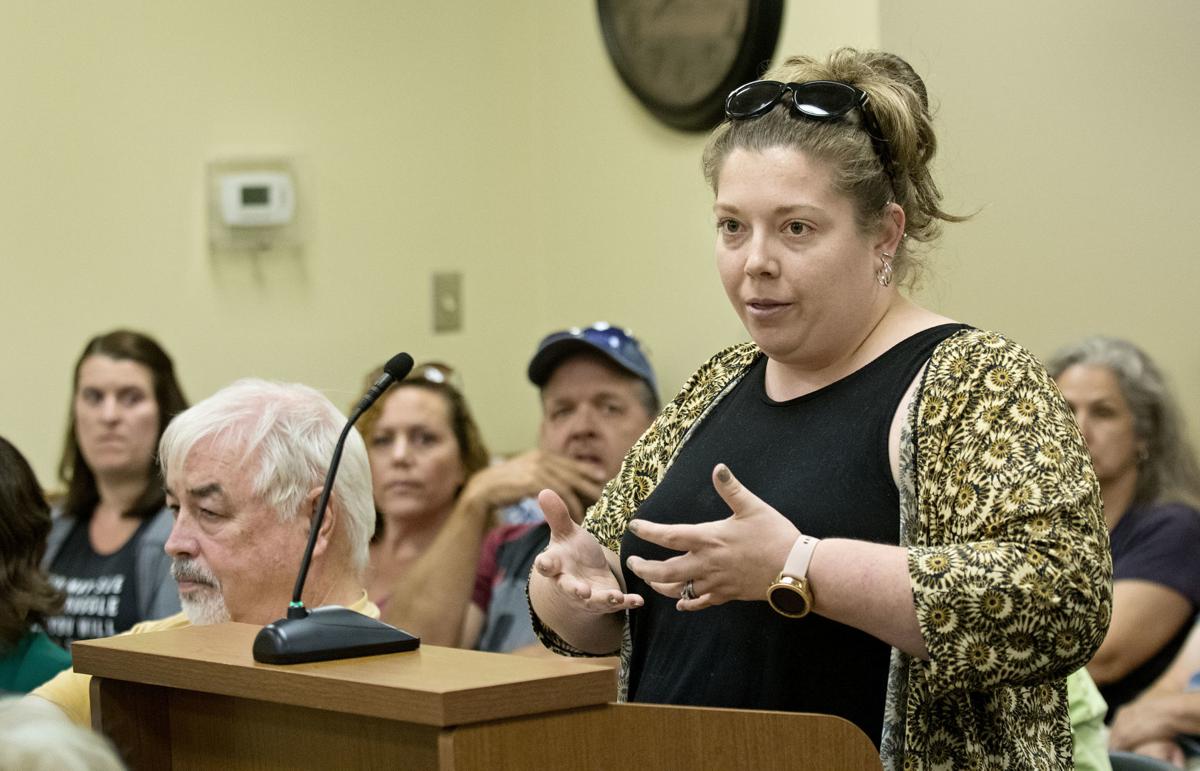 STRASBURG – At a Town Council work session Monday evening, council members, community members and the mayor spoke about an incident during Mayfest in which the mayor is accused of driving a John Deere Gator utility vehicle into the town library while under the influence of alcohol.

The nature of the accusations against Mayor Richard A “Rich” Orndorff Jr., the charges against him, and the fact that the crash happened during Mayfest  “makes the mayor’s conduct pretty indefensible,” said Councilwoman Emily Reynolds.

“The mayor resuming his duties without acknowledging his conduct to the town feels wrong to me because it seems like the mayor is choosing to protect himself from the consequences of his conduct over genuinely making amends,” she said. As a council member, she said her job is to do what’s best for the town, doing “whatever I can to ensure that this council works well together, and part of that is holding one another accountable for our actions. That’s what I’m trying to do.”

Reynolds and two other council members voted at a meeting last week to hold a closed session to discuss the matter. The rest of the council voted against the closed session. Reynolds and Councilwoman Kim Bishop have said they asked that a discussion be added to this week’s work session agenda.

About 45 community members attended the session.

“I’m not really sure how to move forward,” Reynolds said, addressing the council. “I wanted to hear how you feel.”

The work session followed months of community turmoil during which time the mayor has said he was recovering from extensive injuries dating to the May 17 crash. For weeks, the community had little information on the mayor’s condition or pending criminal charges against him, and the Town Council was left without a mayor and a tie-breaker in the event of a 4-to-4 vote. Vice Mayor Scott Terndrup acted as mayor until Orndorff officially resumed his duties at the regular council meeting on Aug. 13.

Orndorff has said he was in INOVA Fairfax Hospital for almost two months and has since been recovering at home from injuries that included a broken back. He said on Monday that his injuries also included a traumatic brain injury. After Orndorff returned home, Virginia State Police charged him on July 12 with two misdemeanors: driving under the influence of alcohol and driving an all-terrain vehicle on a public highway.

State police, which has stated it took over the investigation at the request of the Strasburg Police Department to avoid any bias or conflicts of interest, issued Orndorff summonses to appear in Shenandoah County General District Court on Sept. 10.

This is Orndorff’s second charge of DUI in five years’ time. In May 2015, he pleaded guilty to drunk driving and was ordered to pay a $250 fine. He also received a 60-day suspended jail sentence and was required to attend state Alcohol Safety Action Program classes “as part of a plea agreement in which the prosecution agreed to drop charges of speeding and driving on a suspended license,” the Northern Virginia Daily previously reported.

In May 2004, Orndorff pleaded guilty in Shenandoah County Circuit Court to assault and battery on a family member. He then pleaded guilty to the same charge in circuit court about three months later.

Orndorff's record in public office in Strasburg includes an initial stint on the Town Council from 1990 until 2000 when he was elected mayor and served three years. He later noted that he stepped down from the position for personal reasons. In 2010, he ran in a special election to fill the remaining two years of a term on the council. Orndorff was re-elected to council in 2012.

Councilwoman Barbara Plitt said Monday that because of all the rumors surrounding the recent Mayfest crash, she felt the residents of Strasburg “deserve more than” a closed session discussion that they would not be a part of.

Bishop used the word “unacceptable” to describe the mayor’s actions on the night of May 17 and reminded the mayor that during his long absence, the council did have a tie vote in June “that no one was there to break.”

“The mayor is the ambassador for the town and should put forward a positive example for the citizens and especially the young people,” Bishop read from a statement she had prepared for the session. “... If we, as a council, do not speak against public intoxication for the mayor, how can we expect that we can speak against it for anyone else?”

Bishop called for a formal censure against the mayor’s behavior at Mayfest and said she hopes “that the mayor would choose to step aside both for his health, which I am concerned for, and the well-being of the town.”

Councilman John Massoud said he’s been struggling with a response to the mayor’s actions and a council discussion about the mayor that has now become more public than he intended.

“He screwed up, it’s what it is,” Massoud said. “I don’t know that a public censure was the right way to go.”

He pointed out that because Orndorff was elected by the people, the council doesn’t have the authority to force or even ask him to resign. Orndorff’s term as mayor ends June 30.

Complicating the issue of the mayor being charged with driving under the influence is that Orndorff is also president of the Strasburg Chamber of Commerce.

Terndrup said he has long viewed those two hats Orndorff wears as a conflict of interest because of the pressure it puts on business owners to decide if they want their business associated with a mayor they don’t agree with.

“As a council member, I felt I got steamrolled,” he said. People in the community were accusing the council and the police of a cover-up, he recalled.

“We had absolutely no information whatsoever the whole time, no matter what people think. … “Because nothing was said for three months, we’re all thrown under the bus.”

Bishop pointed out that the council has in the past taken steps to censure community entities, in the case of the fire department, which “was called out for unacceptable behavior” in spite of those involved not having yet had “their day in court.”

She said the council should take a stand on how it feels.

Three years ago, “I really felt excited when the mayor got re-elected, that he had a second chance to come in and do something and finish what he started,” she said. “And then to have this happen, because of an alcoholic issue, made me sad; it made me feel like that second chance just got flushed away.”

Several community members also spoke Monday, both in support of and opposition to the mayor and his actions.

Addressing the council, Christie Monahan said that in spite of the council’s lack of information throughout the mayor’s absence, it would have been good to know that council was as in the dark as everyone else.

“That was a big point for us to know as citizens,” she said.

“I believe you all need to make a formal statement,” she said, “and that is what censure is. … If you can get up and tell our firefighters that, then you should have the strength of character to tell our mayor.”

Speaking on the side of forgiveness, Marlin Dixon recalled how a “big mess up” he made nine years ago could have cost him his job if his employer hadn’t instead judged him based on his ability to do his job.

Dixon asked the council to weigh the question “Can we do our job, and can we do it effectively” when making a decision on whether to censure the mayor. “Have you done your job well?” he said to Orndorff. “I think you have.”

Coleen McMains also spoke in support of the mayor, telling him after several others spoke, “You have been convicted. By the town here, by social media.”

Residents Robert Baker and Patrick Kehoe suggested the council hold off on a decision until after the mayor’s court date. Many suggested on Monday that the upcoming court date was likely influencing the mayor not to risk incriminating himself by trying to explain himself to the community.

Baker encouraged the council to “postpone doing anything at this point, and Kehoe commented on a suggestion Massoud offered: to amend the town charter giving the council more power to remove the mayor or any council members from office if they’ve been convicted of a felony or certain Class 1 misdemeanors, with a two-thirds vote.

“That will give us a tool for the future,” Massoud had explained. “It will not be retroactive, sorry.”

Amber Ellis, a new resident to the town, said she was shocked when she heard about the mayor’s accident, read subsequent Facebook posts and heard the news that this was Orndorff’s second DUI charge in five years. And then to “wait three months and to still not get any kind of response” from the council or the mayor she said she found “frustrating.”

Speaking at the end, Orndorff acknowledged the community’s concerns, while trying to explain his decisions.

“I feel everyone is entitled to their due process,” he said. Choosing his words, based on counsel he said he’s received leading up to his court date, he agreed that the council needs to make a statement or censure, “sooner rather than later.”

He responded to questions on why he took so long to address the community or why the police took so long in charging him with a crime.

He assured the community that he is still the mayor they elected and that he is capable of doing his job.

Having lost 45 pounds in the time he was recovering, he said he’s healthier now than before his crash. “I haven’t been 169 pounds in 30 years,” he said. “My blood pressure is low.”

Amid concerns his upcoming court date and continued recovery efforts that will affect his availability, he said his only upcoming surgery is to remove wires and metal bars from his mouth. (He will not undergo back surgery, contrary what has previously been reported.)

He recognized that people are questioning their trust in him. But he also questioned some of the community, in particular, people who have reacted with anger on Facebook.

“I’m gonna tell you the biggest reason that people didn’t get information,” he said, “and this is difficult for me to explain to you.”

On Saturday morning, May 18, when his daughter was sitting in his hospital room, on Facebook, he said, “Somebody wished me dead.”

He said he later learned of a local teacher trying to defend Orndorff’s family from the attacker’s criticism, but that the Facebook user then welcomed an opportunity to stand in front of Orndorff’s children, “and I’ll tell them he should die.”

“Those people know who they are,” he said. “... And these are some of the same people that are calling my actions bad. Really? Actions speak for themselves.”

Saying he feels wiser following the vehicle crash and at least one other incident he referenced but didn’t specify, he criticized people who pick and choose who they’re going to forgive based on supposed morals or religious values.

“I’ve not always made good choices,” he said. “I feel like I’ve served Strasburg well. … I appreciate seeing the room full of citizens. I wish that the citizens would be as interested in the other issues happening in town, the good things that are happening, and not just come out for the bad things.”