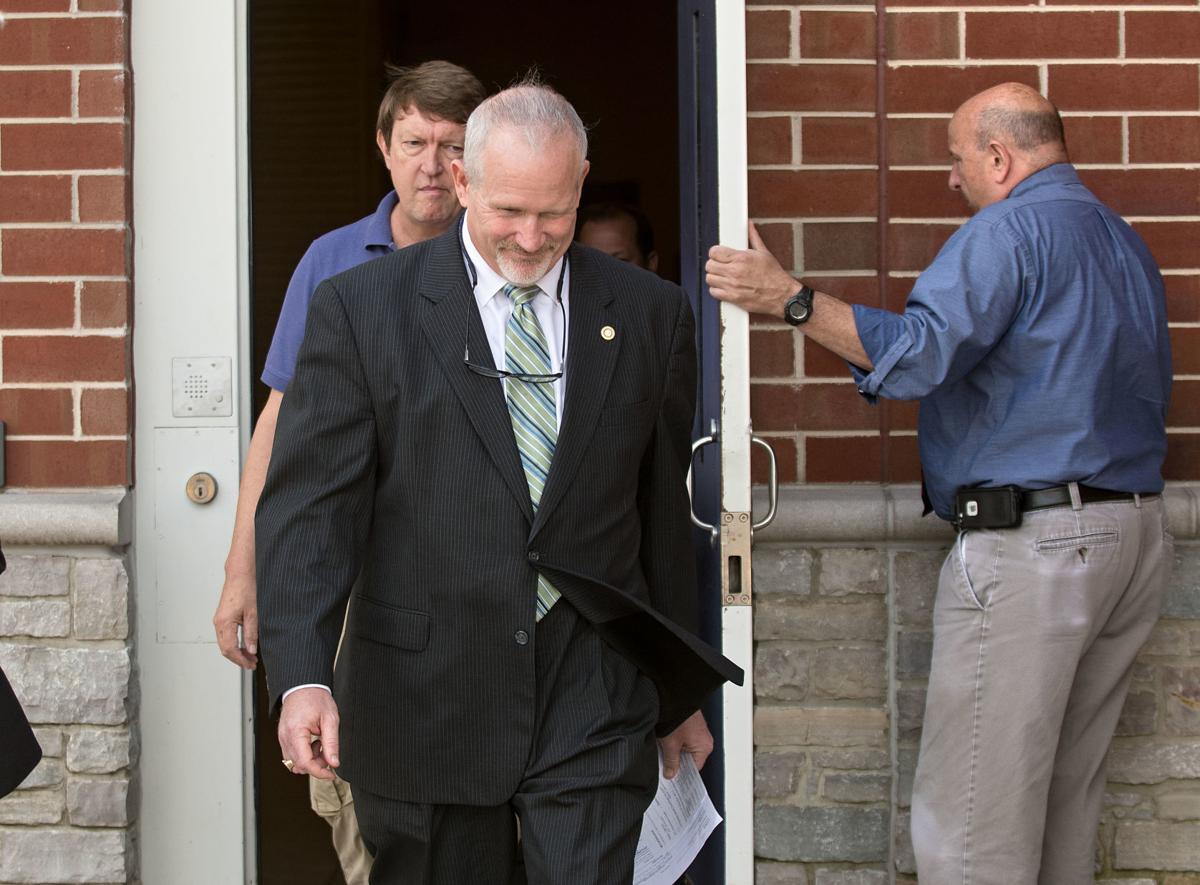 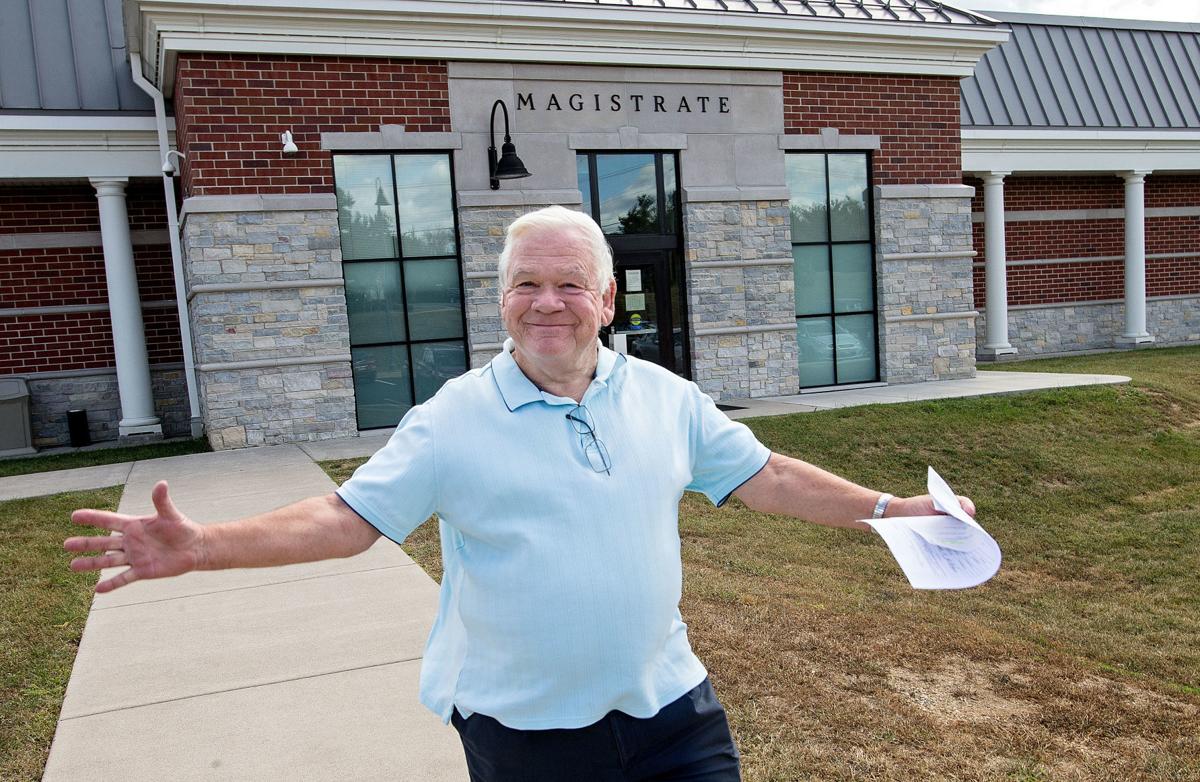 Warren County Board of Supervisors Chairman Dan Murray walks outside of the Rappahannock-Shenandoah-Warren Regional Jail with his paperwork in hand Tuesday after he was released on a personal recognizance bond. He was among 14 people indicted by a special grand jury investigating potential criminal activity involving the Front Royal-Warren County Economic Development Authority. 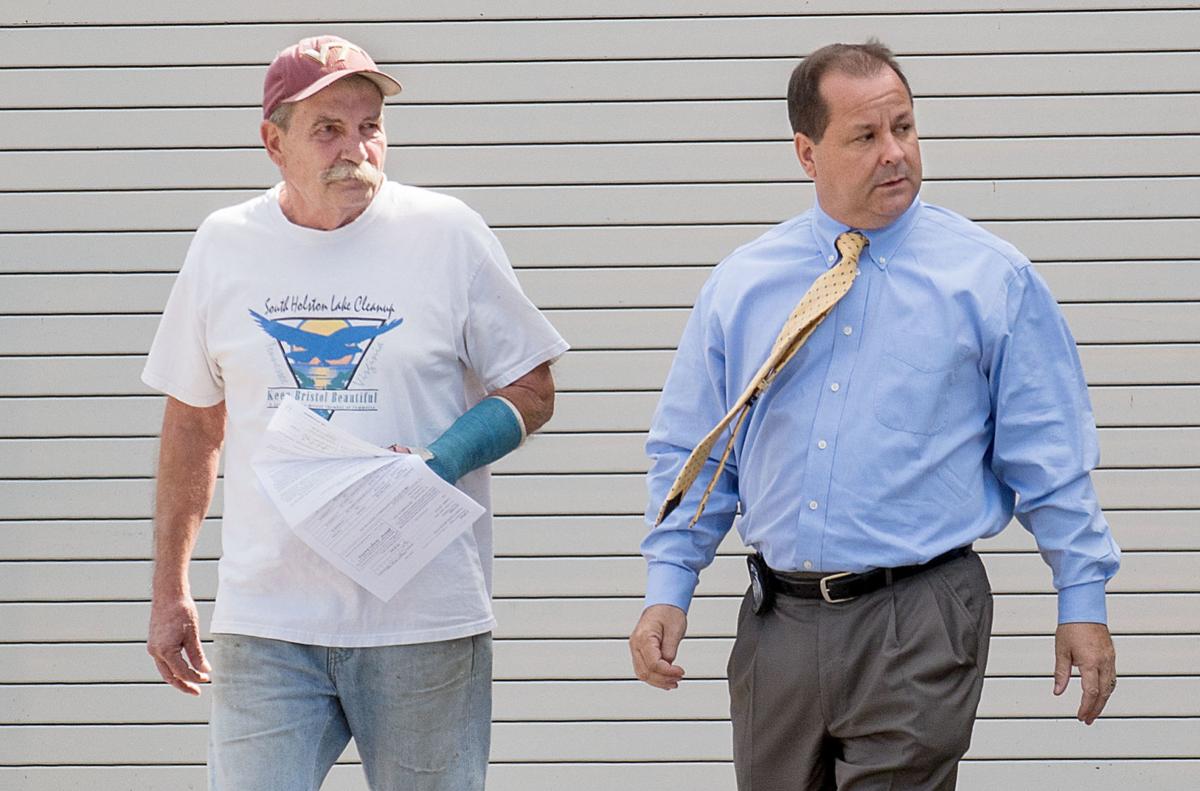 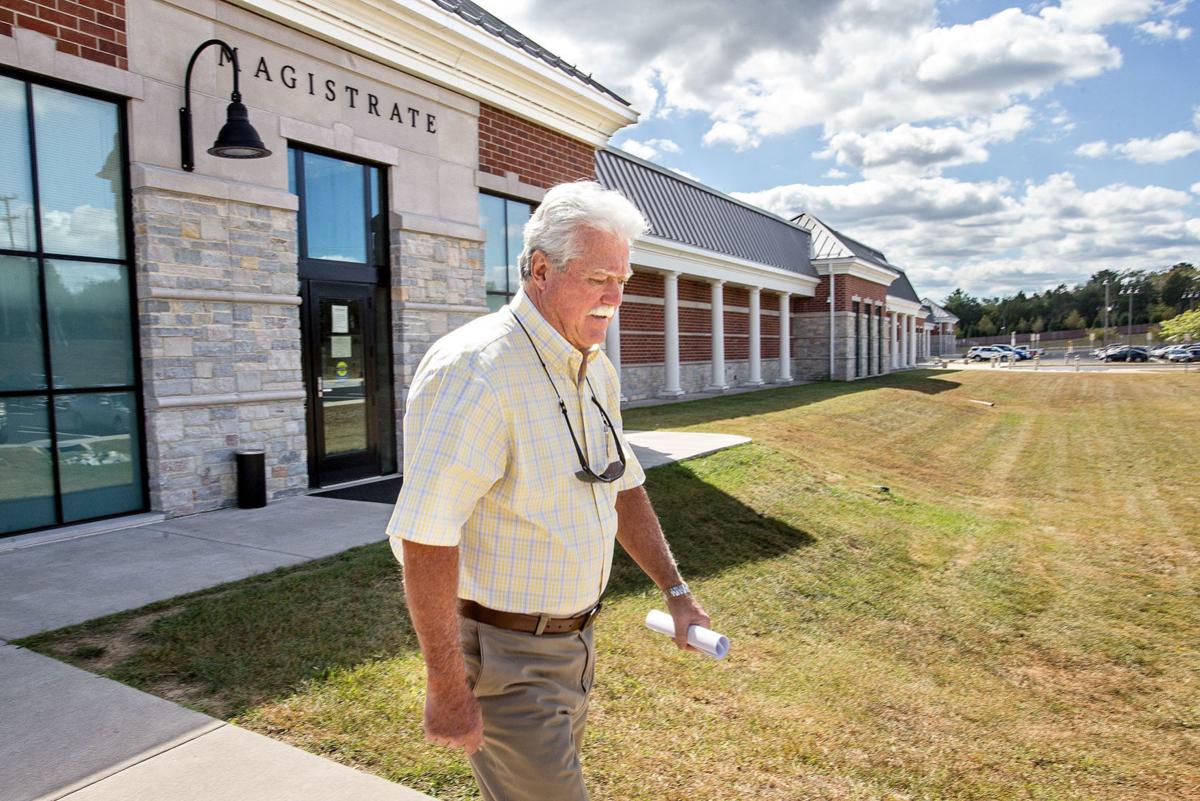 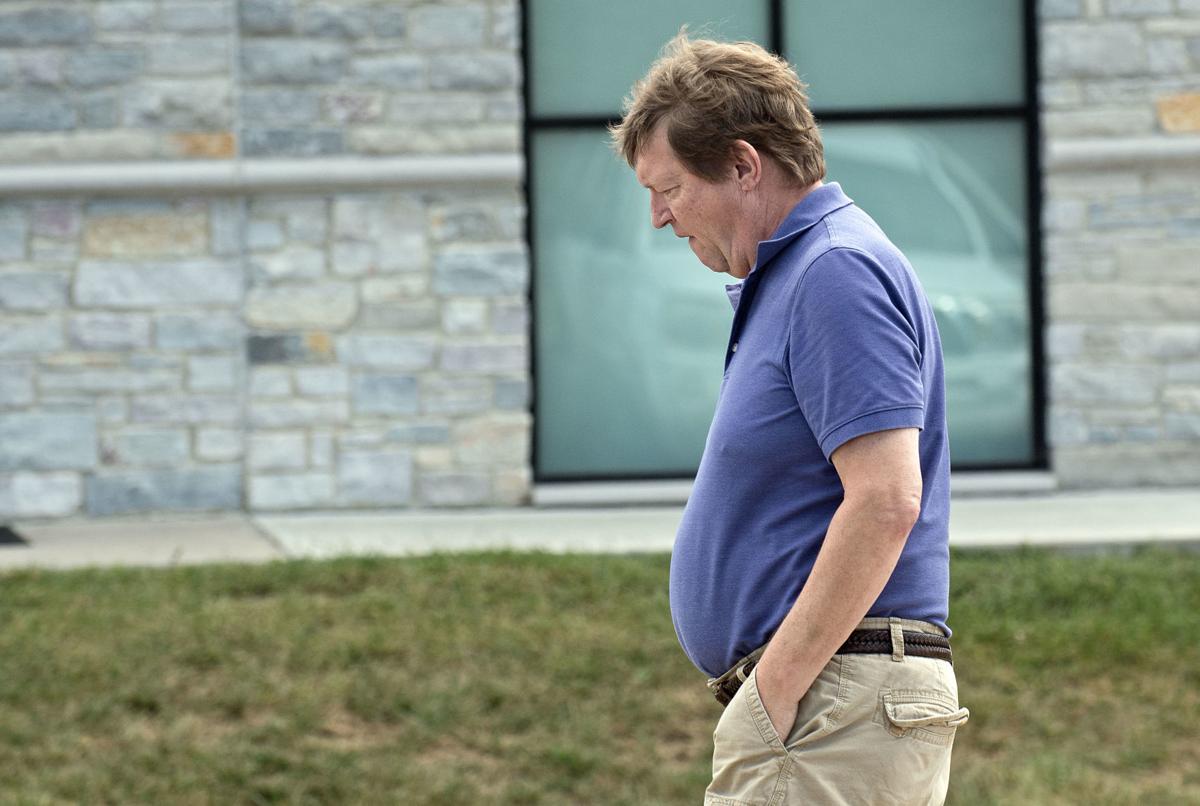 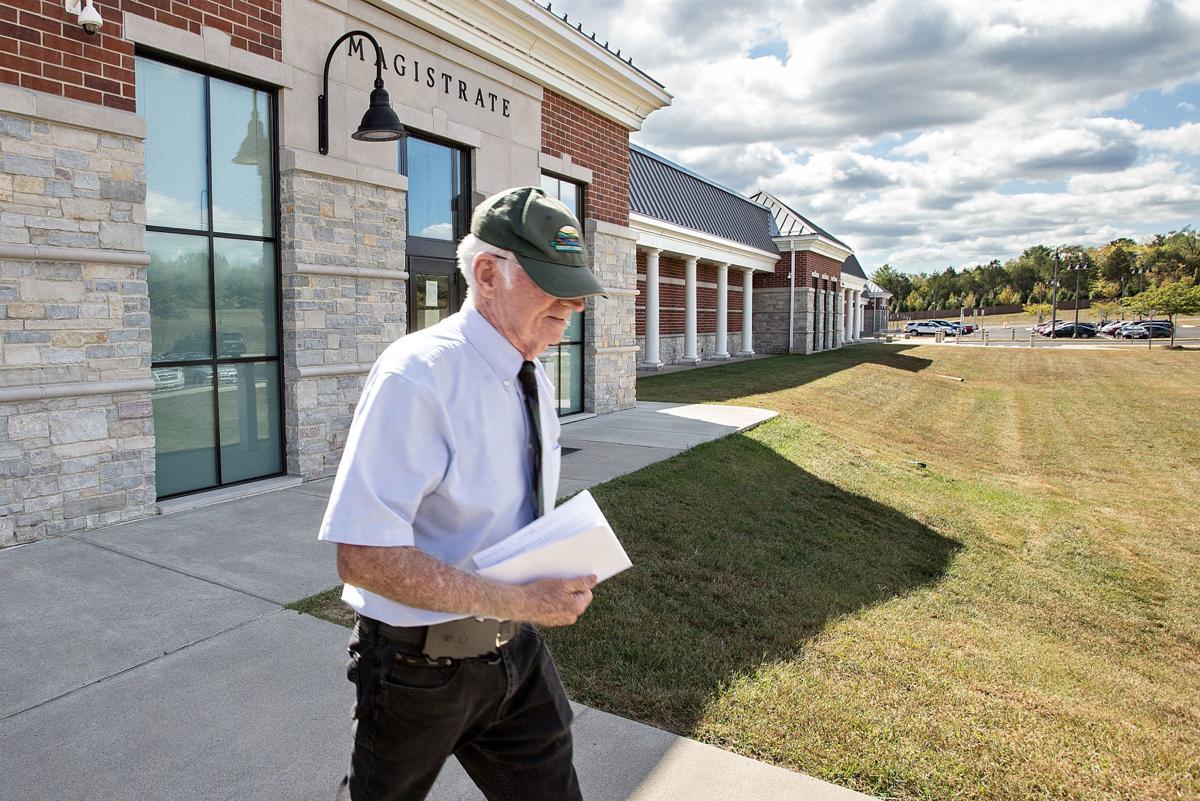 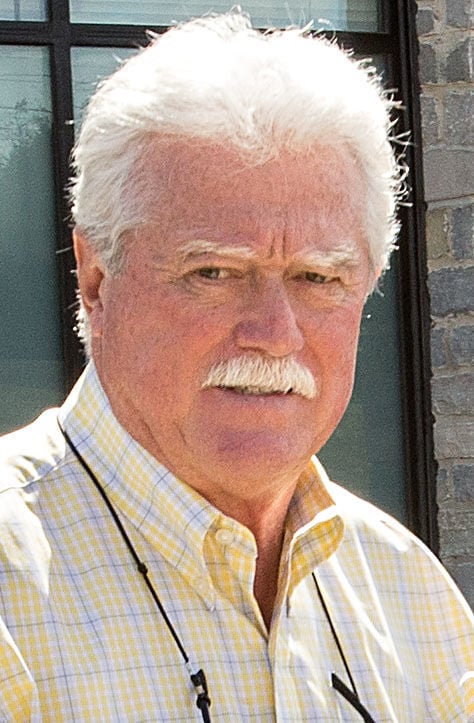 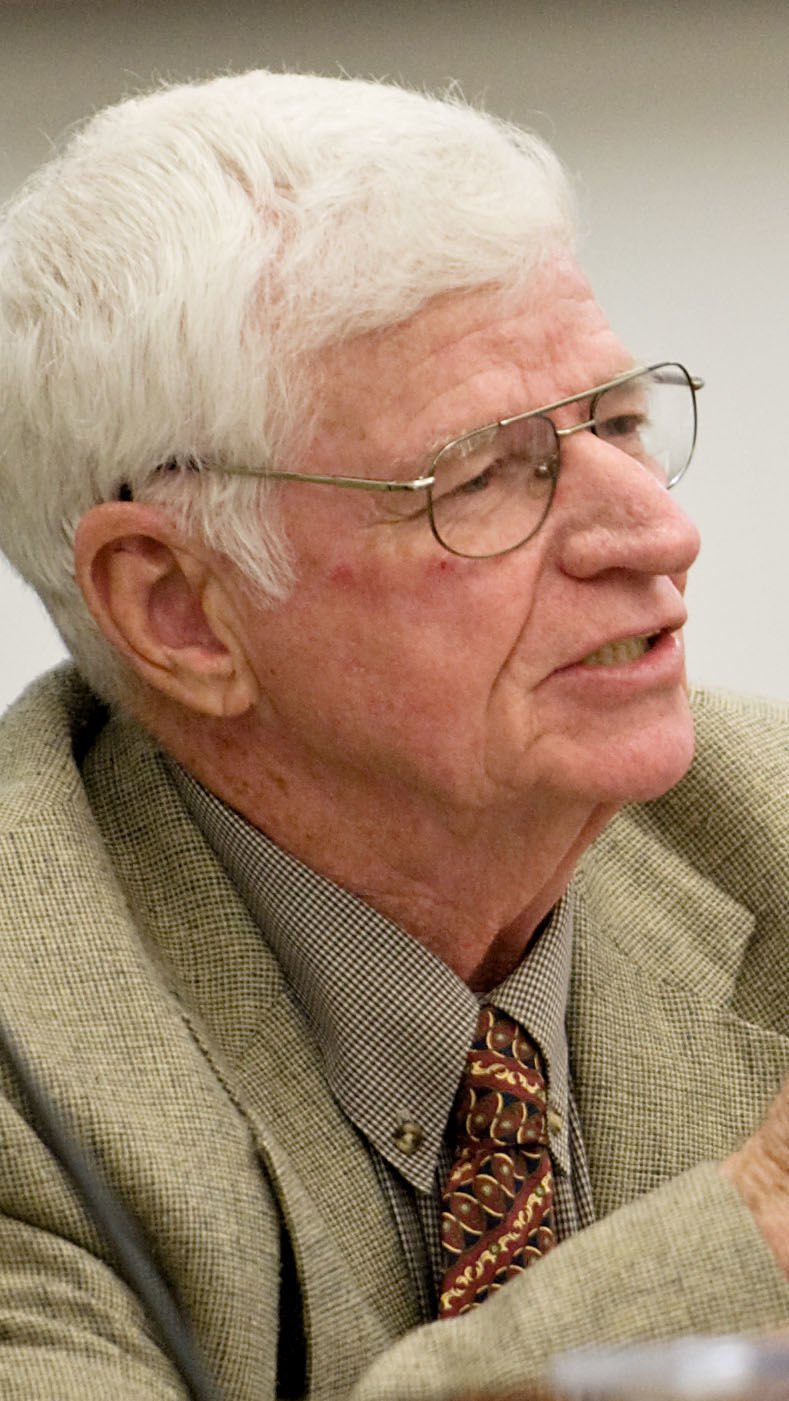 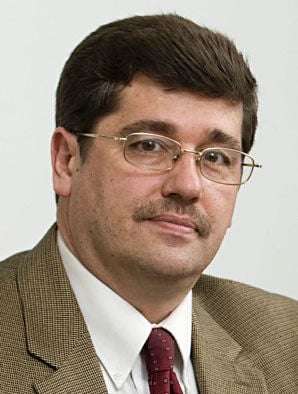 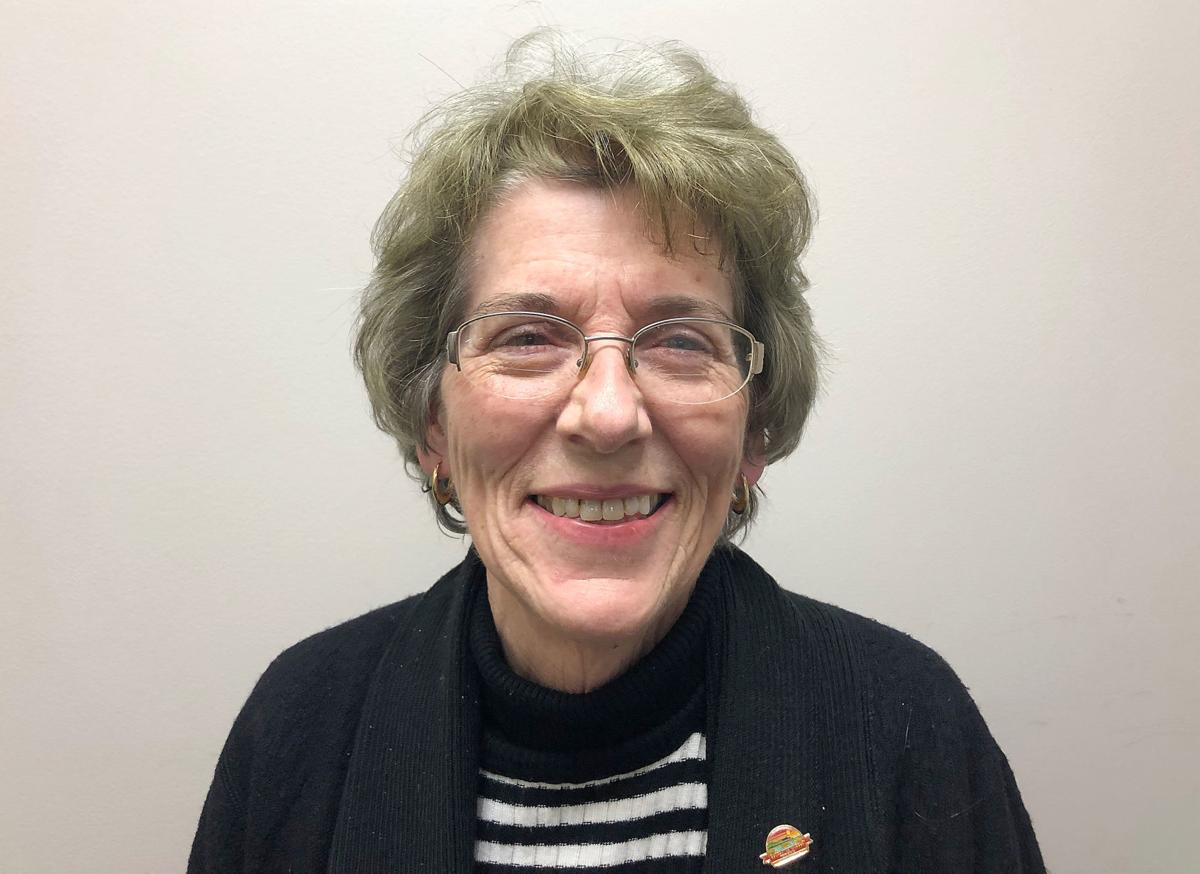 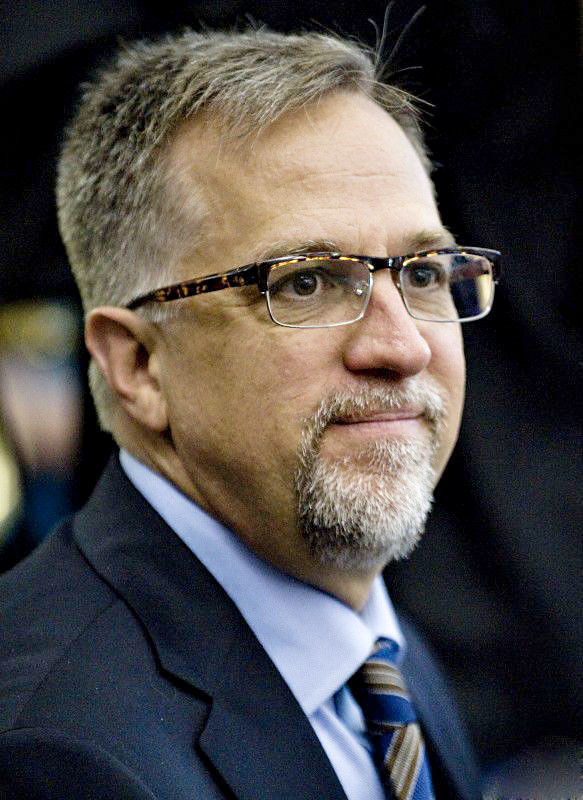 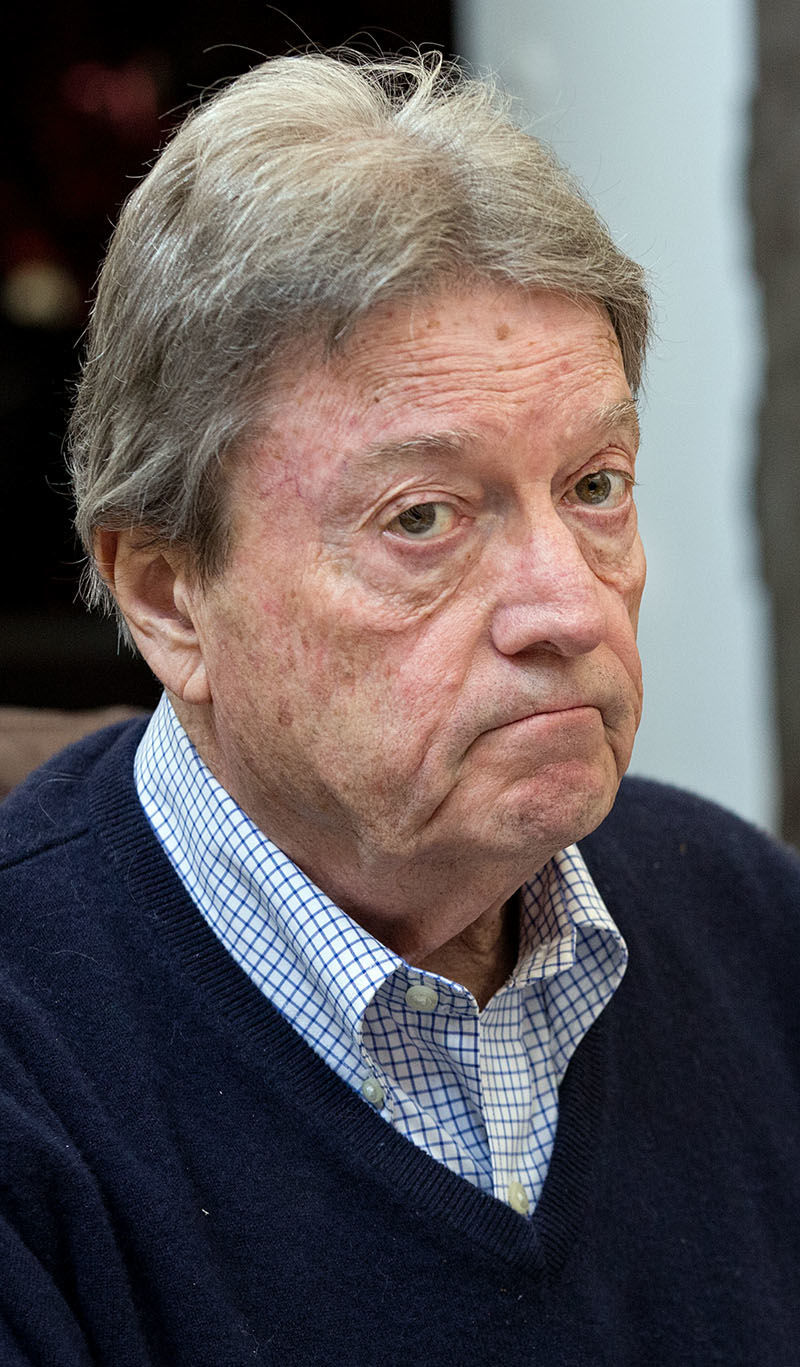 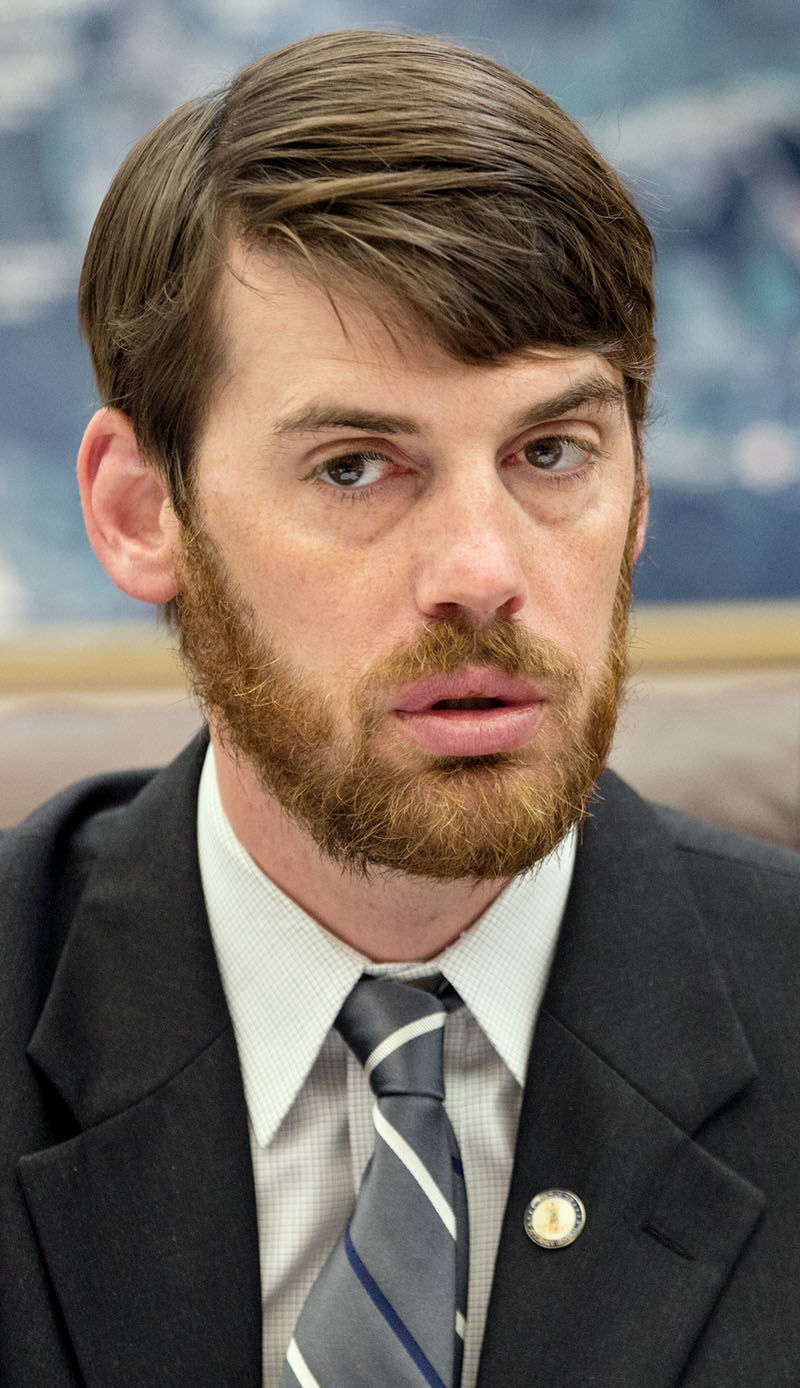 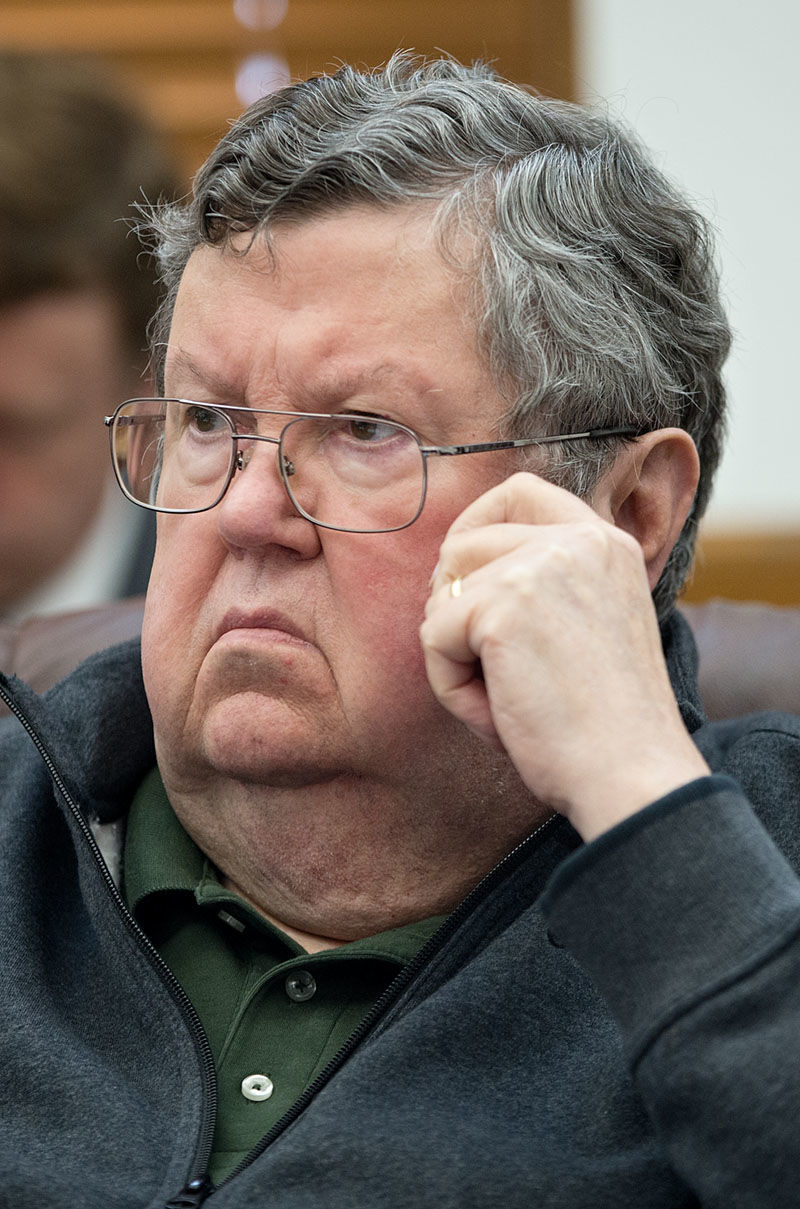 Warren County Board of Supervisors Chairman Dan Murray walks outside of the Rappahannock-Shenandoah-Warren Regional Jail with his paperwork in hand Tuesday after he was released on a personal recognizance bond. He was among 14 people indicted by a special grand jury investigating potential criminal activity involving the Front Royal-Warren County Economic Development Authority.

The five Board of Supervisors members — Chairman Dan Murray, Vice Chairman Tom Sayre, Tony Carter, Archie Fox and Linda Glavis — were each indicted on two misdemeanor counts of misfeasance and one misdemeanor count of nonfeasance.

Prominent county employees who were indicted on the same charges were County Administrator Doug Stanley and former county and EDA attorney Dan Whitten.

Warren County Public Schools Superintendent Greg Drescher, who previously served as the EDA’s chairman, was also indicted on the same three misdemeanor counts. Earlier this month, Drescher announced his intentions of retiring as superintendent in January. According to previous reports, Drescher said he was retiring to spend more time with his sick wife and that it had nothing to do with the EDA.

The Cornell Law School’s legal dictionary defines misfeasance as: “The incorrect, improper or wrongful performance of a legal act.”

Nonfeasance, according to the Cornell Law School’s dictionary, is a charge against an individual for not acting at all.

Misfeasance and nonfeasance charges are less serious than malfeasance charges, which result from officials taking illegal actions in their course of duty.

According to a Virginia State Police news release, the charges are “based on the individuals’ knowledge of and inaction of the EDA’s mismanagement of funds.”

The release states that everyone but Whitten turned themselves into the state police Tuesday and were released on a personal recognizance bond.

Whitten, who resigned as Warren County’s attorney Sept. 13 to accept a position with Prince George County, “will meet with the magistrate and state police Wednesday,” according to the release.

With the 42 indictments handed up Tuesday, the special grand jury has now charged 19 individuals on 83 counts.

In May, Jennifer McDonald, former EDA executive director, became the first person charged by the special grand jury. She now stands charged on 12 felony counts of embezzlement, 11 counts of obtaining money by false pretenses and five counts of money laundering.

Samuel North, McDonald’s husband, was charged on two felony counts of obtaining money by false pretenses and one felony count of money laundering.

Henry Lambert, the former owner of the B&G Goods store, stands indicted on two felony counts of obtaining money by false pretenses and one felony count of money laundering.

All five have been granted bond.

Since the indictments handed up by the special grand jury are sealed, the exact nature of the charges have not been revealed beyond the dates on which the offenses allegedly occurred.

This followed the EDA’s filing of a $17.6 million civil embezzlement and misappropriation and embezzlement lawsuit against nine individuals including McDonald, Poe, ITFederal developer Curt Tran, local businessman Justin Appleton and LLCs associated with those individuals.

Former Warren County Sheriff Daniel McEathron, who committed suicide in May, has since been dropped as a defendant in the civil litigation.

A court order stated that the special grand jury’s investigation will include “alleged misfeasance and malfeasance including the embezzlement or misappropriation of public funds” by entities including the EDA, the Town of Front Royal, the Warren County Sheriff’s Office, Warren County Public Schools and the County of Warren.

The special grand jury’s investigation was originally scheduled to be completed at the end of this month but it recently received a six-month extension through March 31.

A court order stated the extension was due to “the complexity of matters investigated and the voluminous nature of the evidence collected.”

Sayre, who is up for re-election in November, was the only person indicted Tuesday to proclaim his innocence.

A news release from his lawyer, Demetrios Pikrallidas, states: “Mr. Sayre did not break the law at any time, nor has he betrayed the good Citizens of Warren County in any way.”

The release adds that Sayre “faithfully served his constituents in the Shenandoah District and will continue to do so.” It adds that Sayre “looks forward to having his day in Court and clearing his name once and for all.”

Upon exiting the jail, Murray did not respond at all to a request for comment. Carter also declined to comment because the matter is part of pending litigation. Fox said “no comment” as he exited the jail, and Stanley also declined to speak.

As Llewellyn exited the jail, he said: “What are you doing here, a perp walk? No comment. I have nothing to say.”

Glavis, Patteson, Whitten and Blanton all declined to comment over the phone.

Biggs, Drummond and Drescher could not be reached for comment.

EDA Chairman Ed Daley said over the phone that he will decline to comment until he learns all of the facts regarding the situation.

EDA Executive Director Douglas Parsons said over the phone that he would prefer not to react to the indictments.

“We’ll just let the natural course of things carry through and we’ll see what happens. And I really don’t have any comment on it. It is what it is, I guess...I’m focused on trying to run the day-to-day operations and just do the best we can over here,” he said.

Bébhinn Egger Rowland, the former town councilwoman who raised a series of questions regarding EDA dealings in 2016, said over the phone that her first reaction to the indictments was, “I’m glad people are being held accountable.”

“There was a gross lack of oversight and just downright negligence and I told people again and again and again that something was wrong and it should be looked into...Everybody either ignored me or was outright hostile to me,” she said.

Egger Rowland added that while EDA and county officials were indicted, the Town Council also “ignored it as well.” Despite what she regards as the town’s lackadaisical attitude toward the EDA, she said the legal ramifications are not clear because the town did not have direct oversight of the EDA.

“Just on a basic level they also ignored the problem and tried to get me to be quiet about the problem,” she said.

Mark Egger, Egger Rowland’s father and fellow EDA critic, stated in an email that “if the local political establishment had listened” to his daughter in the fall of 2016, “a lot of this mess could have been avoided.”

“But instead of listening to her and answering her questions, they disrespected and attacked her, which got me involved. Lesson to be learned – don’t treat my daughter that way,” Egger stated.

Bonnie Gabbert and her husband Paul Gabbert, who have expressed distaste with the local government, said over the phone that it is about time something happened.

Bonnie Gabbert noted that a group of citizens had been organizing a potential petition for a recall election. She said that will be put on hold with the hopes that “maybe they’ll man up and go ahead and resign right now.”

Paul Gabbert said: “I am one pleased individual” and happy to see people other than McDonald being held accountable because she “was not the only fish.” He added that he hopes the grand jury continues digging and the same individuals indicted Tuesday are charged with offenses more serious than misdemeanors.

Kristie Atwood, another individual who has been vocal about county government issues, stated in an email that “government is for the people by the people, it’s not for cliques, the elite or the good ole boys” and that Tuesday was “a great day for the Warren County community.”

Melanie Salins, another vocal critic of the county and EDA, said over the phone that she had a mixed reaction to Tuesday’s indictments, which included shock that “it’s finally happening” and being glad officials are being held accountable.

“At the same time, I’m just kind of saddened and embarrassed for our town that it’s come to this,” she said.

Salins said the indictments are confirmation that “the entire government let us down.”

“They ignored the citizens...they thought they were above the law and could do whatever they wanted and walked all over the citizens,” Salins said.

Regarding the sparse comments given from the officials, Salins said that is “absolutely insulting” and “it shows that they don’t even think they owe us an explanation.”

“I think that it shows their arrogance,” she said.

Fern Vazquez, another government critic, said over the phone that for so long “the good-old-boy network” had been “a little patronizing toward those of us who were asking questions and tried to obfuscate and get around things.”

“In some ways, it’s a very sad day...I don’t sit here with glee and watch all that came down but probably the strongest impulse is that this is the day of accountability,” she said.

EDA IN THE NEWS

As of Sept. 24, the special grand jury has charged 19 individuals on 83 counts.

Mowing The Day Away