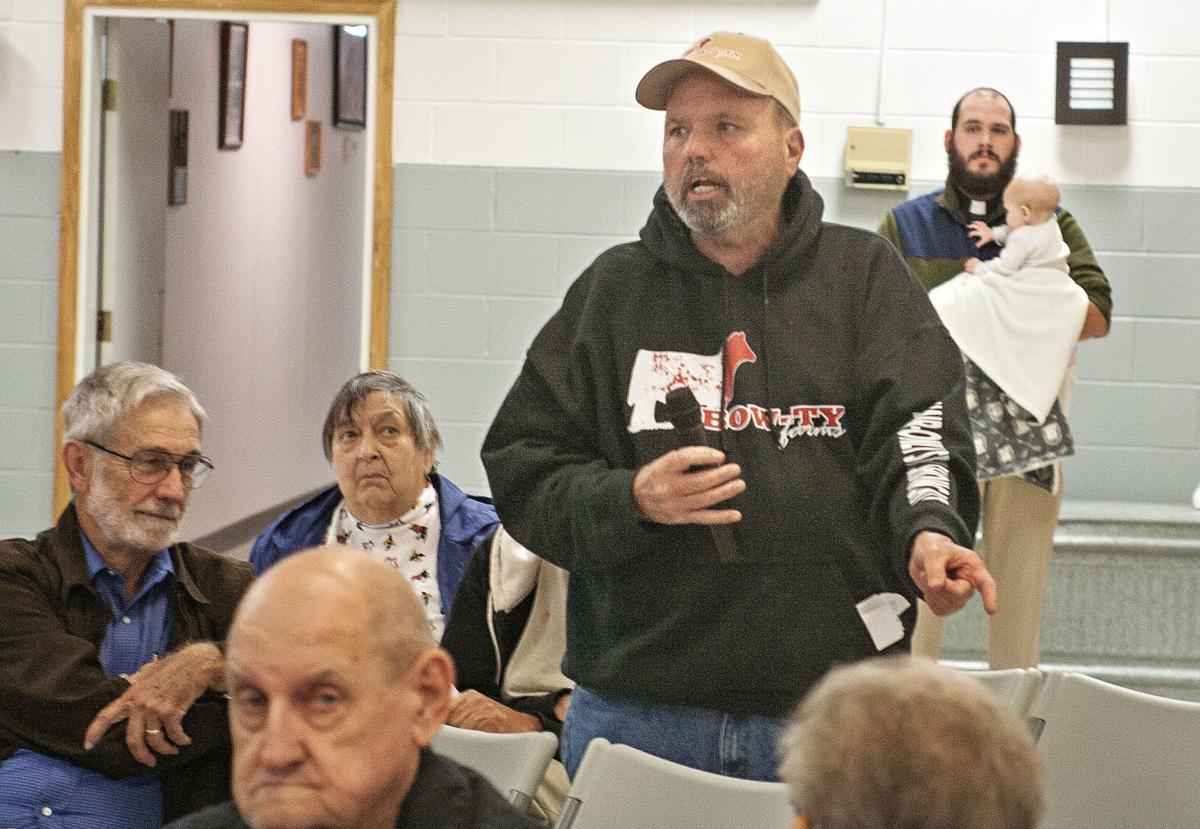 Gregg Bowman, a lifelong Maurertown resident, said he wants low taxes but thinks the meals tax is the “fairest” tax he can think of. 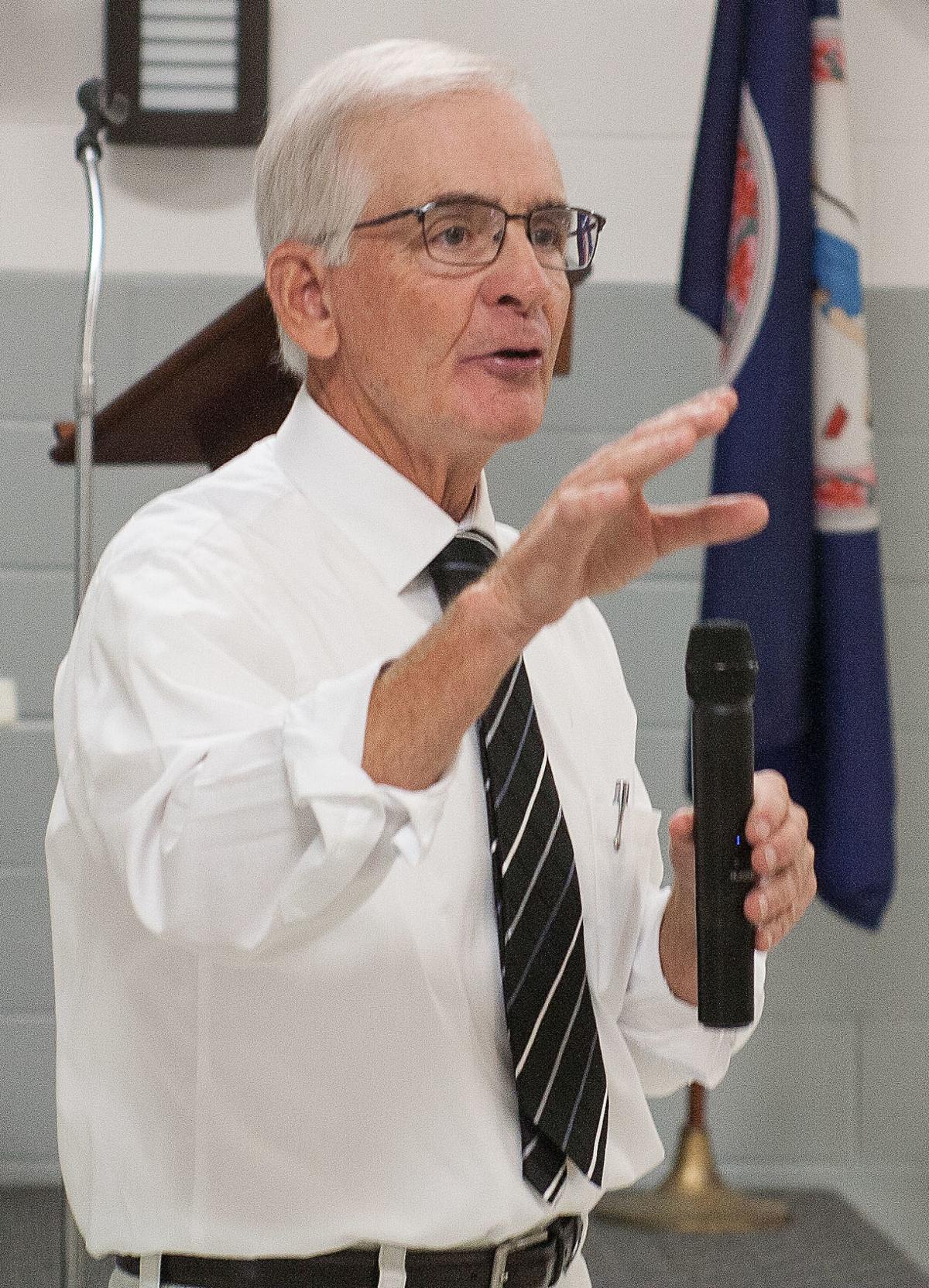 Dennis Morris, the District 5 county supervisor, urges voters to research the meals tax issues themselves and get educated before voting in November.

Gregg Bowman, a lifelong Maurertown resident, said he wants low taxes but thinks the meals tax is the “fairest” tax he can think of.

Dennis Morris, the District 5 county supervisor, urges voters to research the meals tax issues themselves and get educated before voting in November.

TOMS BROOK – In the middle of a fiery discussion about instituting a meals tax for Shenandoah County, the fire alarm blared through the volunteer fire department.

Pee Wee Bowers, president of the Toms Brook Volunteer Fire Department, said during a county district meeting Tuesday night that the alarm had been a regular occurrence and that volunteers had been traversing the town and hustling up and down Interstate 81 all day.

“That’s number nine in two days,” Bowers said as the alarm rang out. “Volunteers, supplemented by the career system … we are a combination system but there’s more volunteers than we have career staff.”

The Shenandoah County Board of Supervisors moved to put a meals tax of up to 4% on the November ballot earlier this year. If voters support the tax next month, restaurants and businesses that prepare and serve food in the unincorporated sections of the county would become a new source of revenue.

Evan Vass, the county administrator, explained that while towns in the county — all of which have a meals tax — can institute the tax community by community, a countywide meals tax beyond the towns must be approved by ballot initiative.

Vass told audience members the county plans to earmark all of the funds the meals tax would raise for capital projects, including providing funding for schools and volunteer fire departments.

Dennis Morris, supervisor for District 5, hosted Tuesday’s meeting, telling the crowd of around 45 people that his goal is to educate the public and make sure that voters know what they will be voting up or down next month.

“I would hate for this proposition to lose because of false information or misinformation,” Morris said. “I want to educate the public. I want to do my part. And I believe in this.”

While the majority of attendees spoke favorably of the tax and applauded other speakers who shared their views, some voters are skeptical that the tax is the best thing for the county — both from a logistical point of view and because of the precedent it appears to set.

Sabrina Schneibel, a Woodstock resident, said the meals tax runs counter to the morals the county was founded upon. The tax, she said, codifies the ability to “pick the pockets” of people traveling through Shenandoah County “because they’re from out of town.”

“When did that become OK in this county?” Schneibel asked. “It didn’t. It never has. We are shirking our responsibility because we got lazy.”

“We should be out here helping you as a community, as a family,” she continued, gesturing around her to the volunteer fire department building. “Because that’s the way this county started. That’s the way to see the legacy is carried on.”

Other voters said they are having a hard time getting behind a tax that the county hasn’t provided prospective figures for. Concerns included how much the tax would raise — surrounding counties range from less than $300,000 a year to as much as $1 million — as well as the ability of a treasurer’s office being capable of handling another tax to track and collect.

Vass said he did not have figures on how much the tax could raise in part because sales tax information that the county could collect to do that math is protected by state law. The other reason, he said, is that he does not want to be in the business of speculation because he would be wrong, he said.

Rich Walker, Supervisor for District 3, is the sole supervisor who opposes the meals tax. He attended the meeting on Tuesday, echoing arguments about the difficulty the Treasurer’s Office will have. Walker is not running for re-election but is running against Cindy George for the county’s treasurer position.

Walker said the meals tax will add a 4% tax on top of the 5.3% sales tax county businesses are already paying.

Although the meals tax and sales tax are both effectively pass-through taxes that a business passes on to the consumer — the tax is added on to the final bill at a restaurant, not on the restaurant’s purchase of meal ingredients — the business will still be affected by things such as credit card fees, Walker said.

George said Wednesday that she doesn’t see any problems with collecting another tax because the county already collects a similar tax — the transient occupancy tax. She said that if the referendum is approved, she plans to educate the businesses that will collect it but that it shouldn’t require any more staff or resources than the county already has.

Opposition was met with support. Many residents pointed to neighboring localities and towns, all of which have a meals tax in place.

Shenandoah County is the only county along 280 miles of I-81 that does not have a meals tax, said Edinburg resident Dan Walsh. There are meals taxes and restaurants paying them in every town in the county and every county along the interstate, he noted.

If volunteer departments such as Toms Brook are responding to calls along the interstate at an average of every-other-day, it makes sense for the county to help recoup some of that cost, he said.

“It’s not picking anybody’s pocket,” he said. “It’s very reasonable that, again, most counties along I-81 engage in. We can talk about this, it’s fine. But the scaremongering is really distracting people from the underlying issue, which is that there is one county along the 280-mile-stretch of 81 that doesn’t do this.”

Gregg Bowman, a farmer and lifelong Maurertown resident, argued the tax is the simplest one he could imagine.

“Nobody wants to pay any more taxes than they want to,” Bowman said. “But this is about the fairest tax you’ll ever get in your life because if you don’t eat out, you’re not paying [any] tax.”

Voters will either pass or knock down the meals tax item on their ballots next month. If the initiative fails, it cannot appear on the ballot for at least three years.