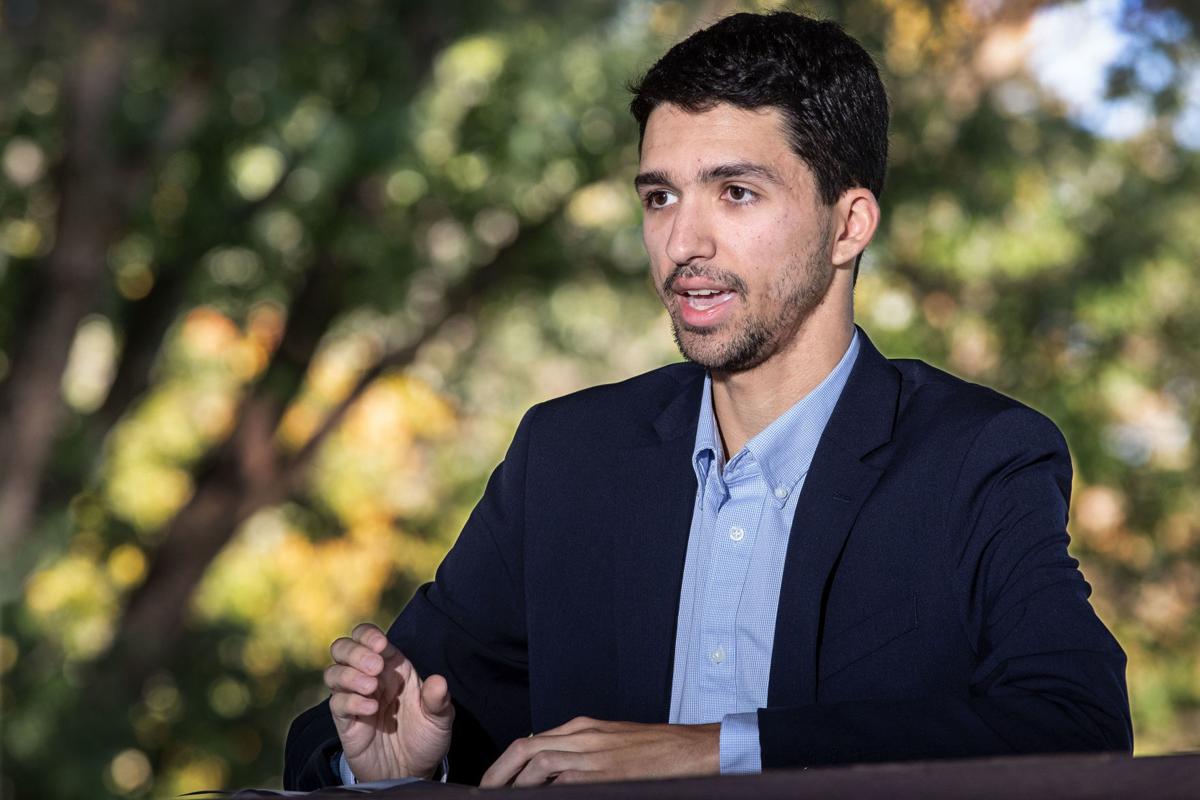 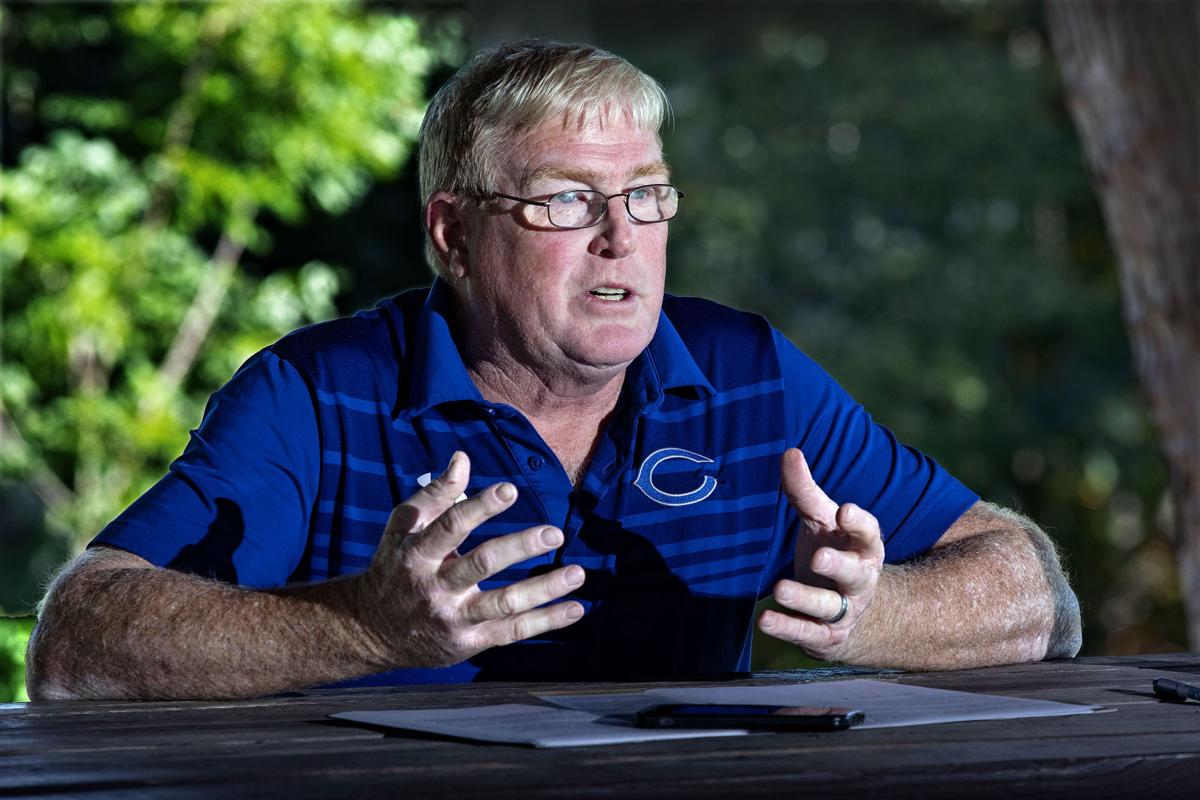 WOODSTOCK — The Republican Women of Shenandoah County and the Shenandoah Freedom Caucus held a Tuesday forum for District 4 School Board candidates at W.O. Riley Park shelter in Woodstock.

Candidates for the seat, Kyle Gutshall and Steve Shaffer, fielded questions from moderator Beecher Bowers. Each candidate gave opening remarks and were asked three questions that were provided ahead of time.

Gutshall, who said he is attending Lord Fairfax Community College and majoring in business administration, said he feels his major should help him if he is elected.

“I think that my skills actively pursuing a degree in business, taking accounting classes, other math classes, I think those type of courses will really help me when it comes to looking at a budget,” Gutshall said. “I’m someone who, I identify as a fiscal conservative. I believe that we need to really keep an eye on the spending that were making, but at the same time I do think that the teachers are lacking some pay right now. There’s definitely opportunities to pay teachers more here in Shenandoah County.”

Shaffer said, as a former school board member, he understands and has been part of the process of examining the budget. He said plenty of eyes look over the budget every year to ensure money is spent properly.

Shaffer said teacher pay and benefits must be improved.

“The board can find savings to improve planning and management of facilities, working close with the board of supervisors to better anticipate capital expenses, lobbying to the state for group funding as well,” he said.

Candidates were then asked how they view the job of the school board and how they should work with the community.

Gutshall said he would like to have a town hall once or twice a year with a question and answer session with residents.

“People should be able to address their opinions with our school board, and the school board should take that into consideration,” Gutshall said. “I think there’s been moments in the past two-to-three years where there have been some concerns from the people, whether it was District 1 or District 4, and I think that the people need to have their voices actually listened to.”

Shaffer said there is a process for parents and guardians to fix issues. He said they should first go to principals. If that doesn’t work, he said they go to the central office. If that still doesn’t work, he said go to school board members. He said he would gladly respond to emails and phone calls. He also said parents should not take their issues to social media, because that only make issues worse.

Shaffer said there’s a lot of challenges that the schools face.

“I believe the schools do fairly well with all of the challenges they must deal with on a daily basis,” Shaffer said. “As a school board member, communication is the key. ... The school system is a large ship. It takes a lot to get it steered. Educating passengers along the way, helping our teachers and staff. The school board makes local decisions based on what’s best for all the children on board.”

The final question asked what the best ways are to support teachers in a school system that is struggling with SOLs, losing students to private schools and homeschooling, and losing teachers to other divisions.

“My observations while in high school were there were a lot of students who struggled with the SOL tests, and I think it’s understandable,” Gutshall said. “It’s not easy. And the teachers are put into a position where they need to teach to this specific test, and it kind of limits what they’re able to do beyond that. A lot of time during the semester they’re spending on one specific topic or trying to get ready for this SOL test. And there’s a lot of students out there who have trouble trying to adapt to that, because not everyone is a good test taker. Not everyone is able to remember the content that you need to take the SOL tests.”

Shaffer said this past year has been one of the worst for teachers and it is important to support them.

“Teaching in good times is challenging and last year was the most challenging year most teachers ever had,” Shaffer said. “And I’m proud of our teachers because they all stepped up and did an amazing job meeting the challenges. However, through virtual learning, something was lost in the exchange. Teaching works best when it’s face-to-face. The over-riding goal this year is to preserve, support and to keep teachers and our children safe and learning in-person.

“Recently conversations that I’ve had with teachers is that this year is even more challenging than last year. Our teachers need space to do their jobs without national and political issues complicating their lives. We, as a community, need to better support our teachers, work to understand and emphasize with them as well as the administrators.”

In his closing remarks Gutshall said it will take time to turn things around, but he’s the right candidate to help do that.

“There is a lot of division that has become an issue here in Shenandoah County and it can be fixed, but it’s not going to be fixed overnight,” Gutshall said. “And I think that we need leaders who will stand up for not only the teachers and the students and the employees, but also we need to have support for our parents as well. The parents should have a voice in what’s going on in our school system. I believe that if they want to get involved, and voice their opinion and what they think is working in the school system I think they should be included as well. We have an opportunity here to turn things around. There are a lot of great candidates running for the school board positions all the way through the districts. And I think that I’ll be a great candidate for bringing transparency back into our school system, which is currently lacking in a big way.”

In his closing remarks, Shaffer talked about a couple of his mentors that he looked up to in school and his mother, who was a teacher, and the impact she had on students’ lives.

Shaffer said the board needs to protect the teachers and communication with the public is key.

“We got to do a better job protecting our teachers,” Shaffer said. “Keeping them off the front pages, keeping the budget, their salaries out of the front pages. Being available is vital. Through my campaign this month I’m meeting every Thursday night at the (Woodstock) Brewhouse. I’m available to anyone in the public who wants to come and talk to me about schools. I also hope to do monthly meetings and to keep the communication open.”

The candidates were asked about the recent name changes that took place in the Southern Campus. Shaffer said he doesn’t believe they should revisit the decision to change the names. Gutshall said he didn’t like how the school board handled the situation, but agreed that it shouldn’t be revisited.

They were also asked about the possibility of adding a Weekday Religious Education program to the schools. If the vote were today, Shaffer said he would oppose it, adding that he’s coming around to the idea and has communicated with the organization. Gutshall said he supports the program.