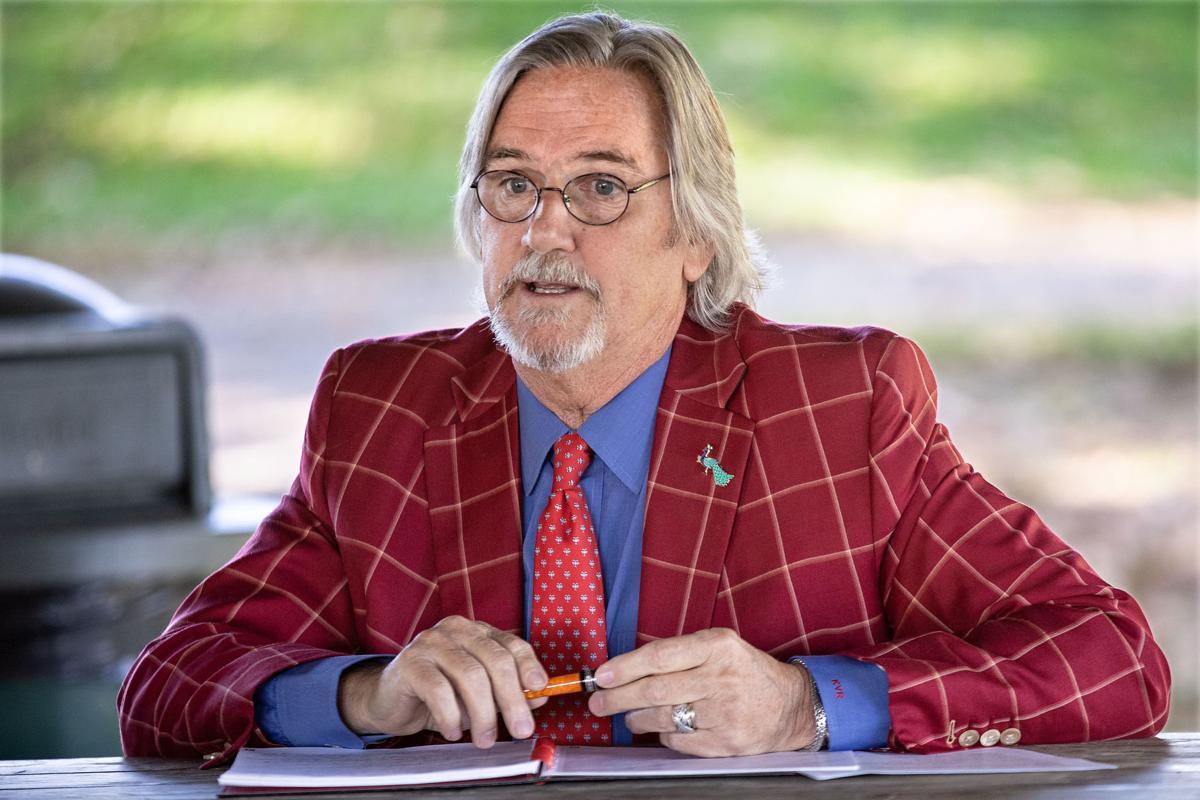 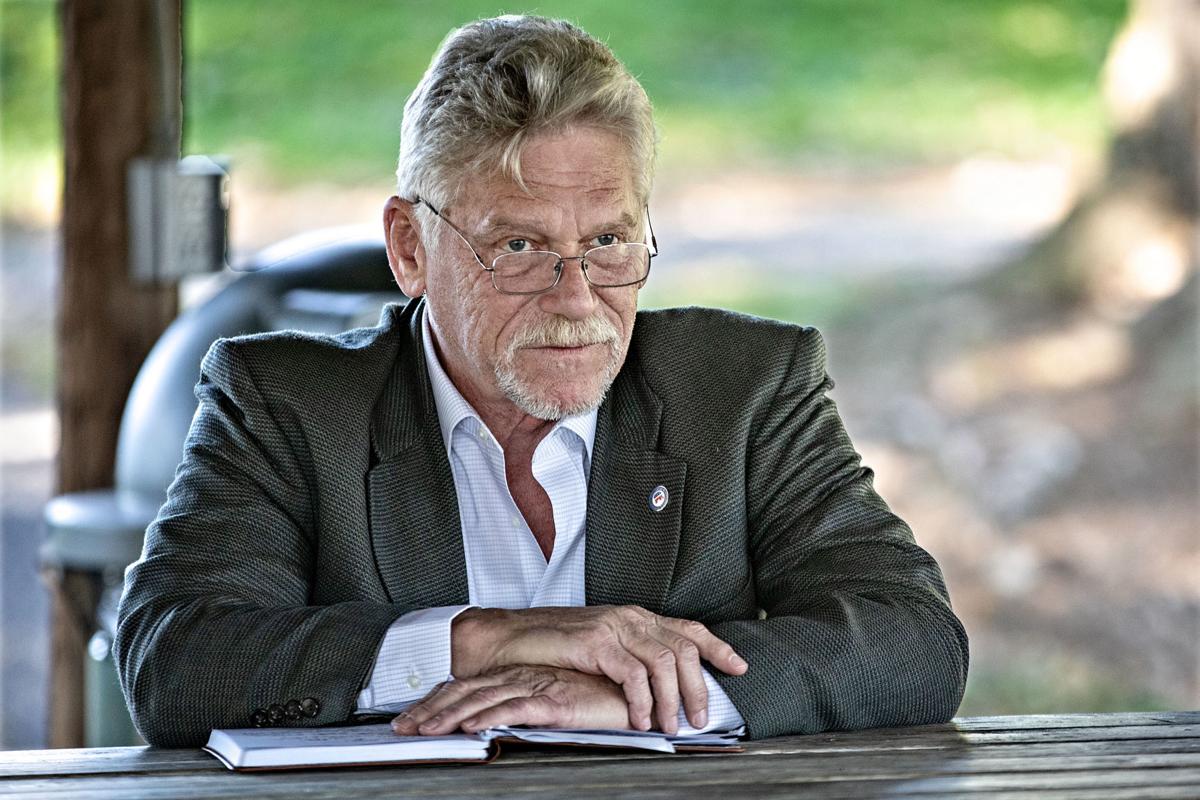 Incumbent Karl Roulston, an independent, is seeking reelection to his second term against H. Wade Guinn III, the Republican candidate. Each took turns answering three questions provided in advance of the event. Rebuttal time was allowed after each candidate gave their response.

Noting that local government is one of Shenandoah County’s largest employers, the first question asked for candidates’ views on economic development.

Roulston said it isn’t “abnormal” for county government to be large employers in small rural communities, adding that the county has “maintained proper and appropriate focus on economic development.”

Roulston added that residents’ median income has “gone up over 4% in this past year” and the county has “actually seen economic growth around 1%,” equating that to 200 new jobs. He said county leaders “invested in” an economic development plan, but that the plan is “sitting on a shelf” due to COVID-19.

“We need to pull that down and we need to start following through on some of what’s outlined in that economic development plan, so that we can continue and build on the successes that we’ve had,” Roulston said. “I do think that we have had economic growth in the county and I’m optimistic that we will have continued growth in this county if we just continue focusing on things that matter to businesses and people, which is a quality of life aspect.”

Guinn agreed with Roulston that Shenandoah County’s government wasn’t “any larger than any other area that’s comparable.”

“Many of us live in safety because of our sheriff’s department and our local police departments. They’re doing a fine job. I have no issues with them. I can’t believe anybody would,” Guinn said.

He said the county has had to start hiring more paid fire and rescue staff because of a decline in volunteers, noting that people “just don’t have the time, they’re not interested or other things in life keep them from doing it.”

Guinn added later that the county’s “No. 1” industry was agriculture and “we need to work on bringing in more business the best that we can.”

“We have to offer things to them,” he said. “And it’s the valley culture that brings many people here.”

During the rebuttal period, Roulston said he didn’t disagree with anything Guinn said and pointed out “it is not a conflict to want some economic development while maintaining our rural agricultural heritage.”

The second question noted that the county has an “unusually high number” of residents working in law enforcement while firefighting is one of the “least prevalent” professions in the county. Candidates were asked how they view that balance, how they see those two services evolving and how the county will pay for the resources those services need.

Roulston said it’s “dangerous to chase statistics” and noted that surrounding counties show similar figures regarding the balance between residents in law enforcement and firefighting professions, adding that such imbalance “might very well just be an anomaly of the rural community that we live in.”

He also pointed out that Sheriff Tim Carter has been “very proactive and forward thinking” in putting school resource officers in each of the county’s schools, which could be contributing to the higher number of residents working in law enforcement.

Roulston added that the “best approach” would be to work with law enforcement and fire and rescue professionals to determine what resources they need to do their job, noting that the county last year approved additional paid fire and rescue personnel in response to the agency’s request for more manpower.

“That’s the best way to deal with the future as well, is to continue working with law-enforcement professionals and our fire and rescue professionals to see what their needs are and not just respond to statistics and say, ‘Oh, we’re low, let’s add more bodies,’” Roulston said. “That’s not the Shenandoah County way. We’re very cautious about adding more.”

As for how the county would fund the added resources, Roulston said, “If we need it, we will have to raise taxes to cover those costs.”

Guinn reiterated the need for more paid firefighters/EMTs because of the decline in volunteers.

“A lot of people get EMTs. That’s normal,” Guinn said. “But when you start getting into the paramedic level and higher, it’s a costly venture for somebody who wants to pursue that avenue and they’re not just sitting around a dime a dozen. We have to come up with something, some way to provide the service for the community.”

Guinn stressed the need for a community approach.

“Shenandoah County is a community. … It takes a community to have a community. And you support each other,” Guinn said. “We just got away from volunteers, big time. … There’s just not that many people that do that anymore and we need to get back to that as best we can.”

During rebuttal time, Roulston said public safety services was an area that could be aided by economic development.

“If we had a broader business base, then that would mitigate the need to raise personal property taxes to cover the costs of these new resources that are required,” Roulston said, adding that more people working in Shenandoah County could mean a larger pool from which to draw volunteer firefighters.

The final question focused on school funding and how candidates would ensure they understood how the county school system worked. The question referenced a fiscal year 2022 school budgeting process that was “acrimonious and confusing,” concerns about increased school spending that “has not resulted in better student performance” and a school division that employs “over 13 administrators who make more than $100,000 in salary.”

Roulston said school administrators who make over $100,000 per year are “highly-degreed individuals with decades of experience” and that he felt “fortunate” to have those individuals working in the county.

He added that he was “certainly glad” that supervisors guaranteed that the school division would receive its full share of federal COVID relief money by level funding schools during the last budgeting process. He noted that the county is already reaping the benefits, as the school division is committing some of that aid to upcoming capital improvement projects.

Roulston added that he understands how the local school system works, and the supervisors have emphasized more engagement with the school board and school administrators — an “essential” piece of the funding process.

“Attitude reflects leadership, and that’s from the top down,” Roulston said. “It’s not just about dollars and cents with teachers and employees in general. It’s also about feeling like they’re valued and their work has value, and we need to show them by supporting these teachers, that we do appreciate what they’re doing for us and we do want to keep them and retain them so that we can continue the education of our children as we want them to be educated.”

Guinn said the last year and a half was “very demanding” on everyone, particularly schools.

“The suspicion and mistrust and finger pointing between people and the school board and board of supervisors, it’s getting nowhere,” Guinn said. “Should there be open dialogue? Yes, without a doubt. Obviously we’ve seen the need to suggest more dialogue with everybody, not just the boards (but) also the citizens. The school is there to provide our children, our grandchildren the best education that they can get. If everybody works together we can stop the finger pointing and just work together and go for the common cause.”

Both candidates stressed the need for more unity in the county in their closing remarks.