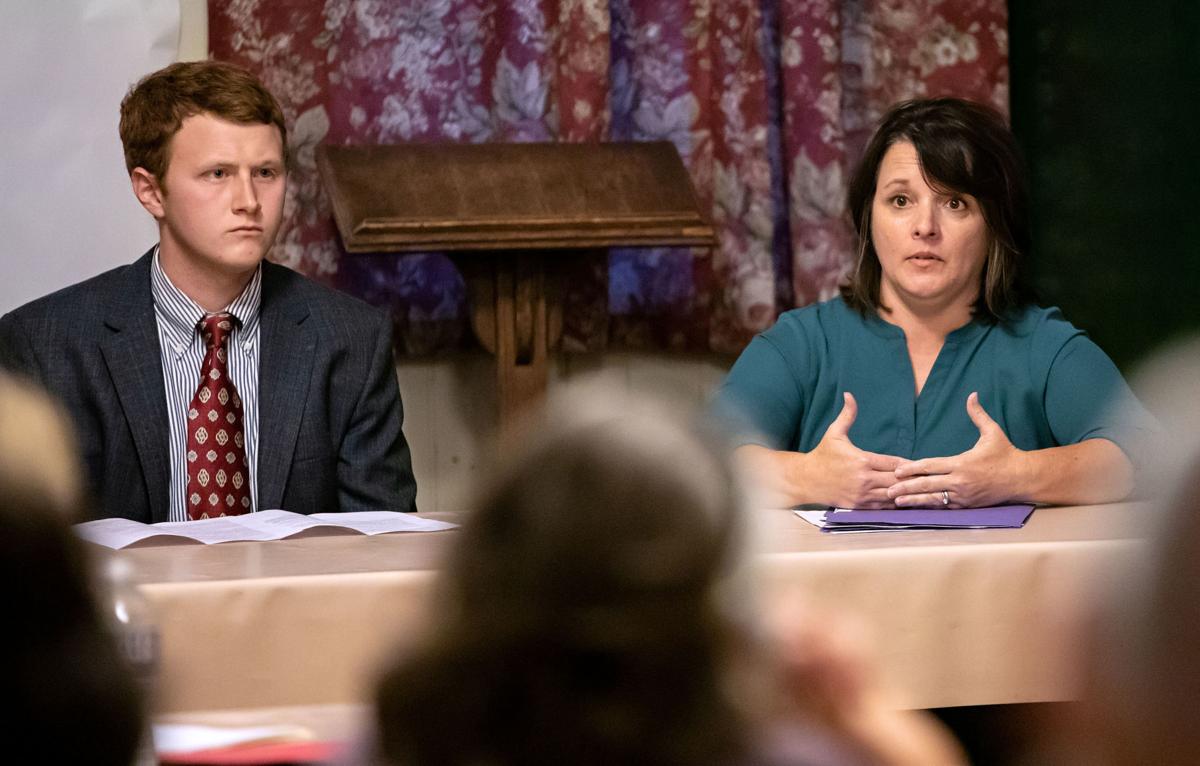 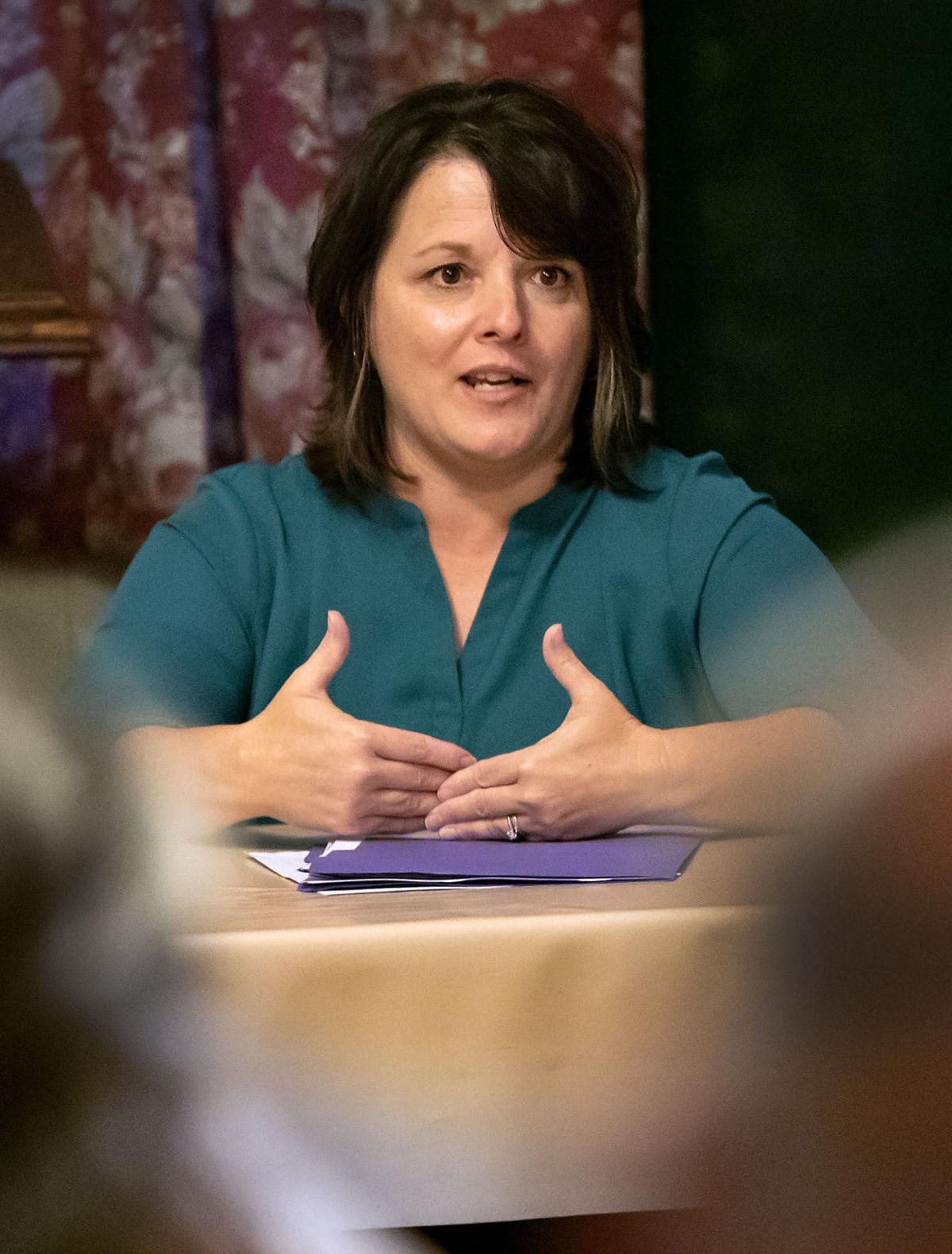 Each candidate gave opening remarks and were asked three questions, which were provided to them a week in advance. School funding was the topic of the first question.

“Making sure that every dollar we spend goes to improving education for our kids while avoiding spending money on things like name changes and consultants, which I think we can all agree is a good idea,” Jacob French read. “Our school system is resource limited and can not spend its way out of its problems. On the issue of teacher pay I believe that our school systems should start solving the problem by improving the health insurance plan. I believe this is a cost effective way to put dollars back into our teachers’ paychecks without directly increasing payroll. This change will also put dollars back into the paychecks of the support staff and bus drivers, which the school system is in desperate need of.”

Rutz mentioned that teachers got raises this past year.

“We continually give raises the best that we can,” Rutz said. “We also have to remember that just like you and I do on a monthly budget, we have to hold accountable the budget of government as well, absolutely looking at all sorts of things such as the insurance. Make sure that we are spending correctly is important.”

The second issue was how each candidate views the job of the school board.

Rutz said that she believes changes need to happen.

Jacob French, reading for his cousin, said that it all starts with hiring the right people.

“The school board can set policies, but the execution of the policies is the responsibility of the superintendent and administration,” Jacob French said. “In order to make sure that the administration and policy matches the culture and values, it’s critical that the school board and the superintendent are reliable. This is reinforced by hiring principals and teachers that are good cultural fits with our school system.”

The final issue discussed was the school system losing students to private schools and homeschooling as well as teachers leaving for other divisions.

Rutz said she spoke with a former Shenandoah County teacher while shopping in Strasburg one day. She said the conversation is one of the reasons she decided to run for school board. She said the former teacher left to go elsewhere in part because of the lack of discipline in the schools. She said the teacher told her he had a student who threw a grilled cheese sandwich at a colleague and that student was never punished.

“I hear it all the time from anybody that has worked within the system,” Rutz said. “Discipline needs to be fixed. Parental responsibility needs to be pushed back on. Your responsibility is your child. You need to teach them how to act in school and what’s appropriate. And if you cannot, then we need to work on that. We need to come up with a plan that works for both of us.”

Jacob French, speaking for his cousin, said it’s up to the school division to make themselves the best option for parents.

“It is the responsibility of Shenandoah County Schools to make itself the best option and earn the attendance of all students,” Jacob French said. “There are many ways to better support our teachers in the classroom. I think that one of the first steps to better support our teachers is reviewing the exit interviews of the people that have decided to leave and understand what about our school system is driving people away. This needs to take place between the school board and the superintendent.”

Jacob French also said that his cousin believes that teachers should not have to buy anything for their classrooms, that everything a teacher needs should come from the school system.

In her closing remarks, Rutz said the teacher she talked to while shopping had an encounter with one of his former students who didn’t give him the correct change. The former student was embarrassed and said that it took her seven tries to pass the Standards of Learning tests for algebra.

“We need to examine the fact that we can’t continue to do the same things we’re always doing and expect different results,” Rutz said. “So my job would be to look at those things, to look at what options we have. I ask questions. I never take anything at face value. I don’t take it for faith — ‘this is just the way we’ve always done it.’ I can be a pain in the rear end, as some of you have come across online. So things have to change, and I think that I’m the person that can make that happen.”

Jacob French, in his closing remarks, said that his cousin is the perfect candidate for the position.

“My cousin, Willie, is one of the smartest people I’ve ever met,” Jacob French said. “In fact, when he sees a problem he finds a solution immediately. And not just something that is flawed or doesn’t work, but an economic or a social answer to the problem that he sees. And in my opinion, I think that’s exactly what our county and our country needs, especially at this moment.”

The candidates took questions from the 21 people in attendance.

The candidates were asked about the current culture in Shenandoah County Schools and what changes they would like to make. Rutz said that right now a school board member can’t go visit a school unless they have permission and things like that need to change.

“There has to be open, honest conversations about what goes on within the walls of those three schools on this end of our district,” Rutz said. “It has to have conversations with parents and front line teachers. And that’s what needs to happen. That’s what I plan to happen.”

Jacob French did say that his cousin was sorry he could not be there and he did give out his email address in case anybody needed to get hold of him to ask him questions.