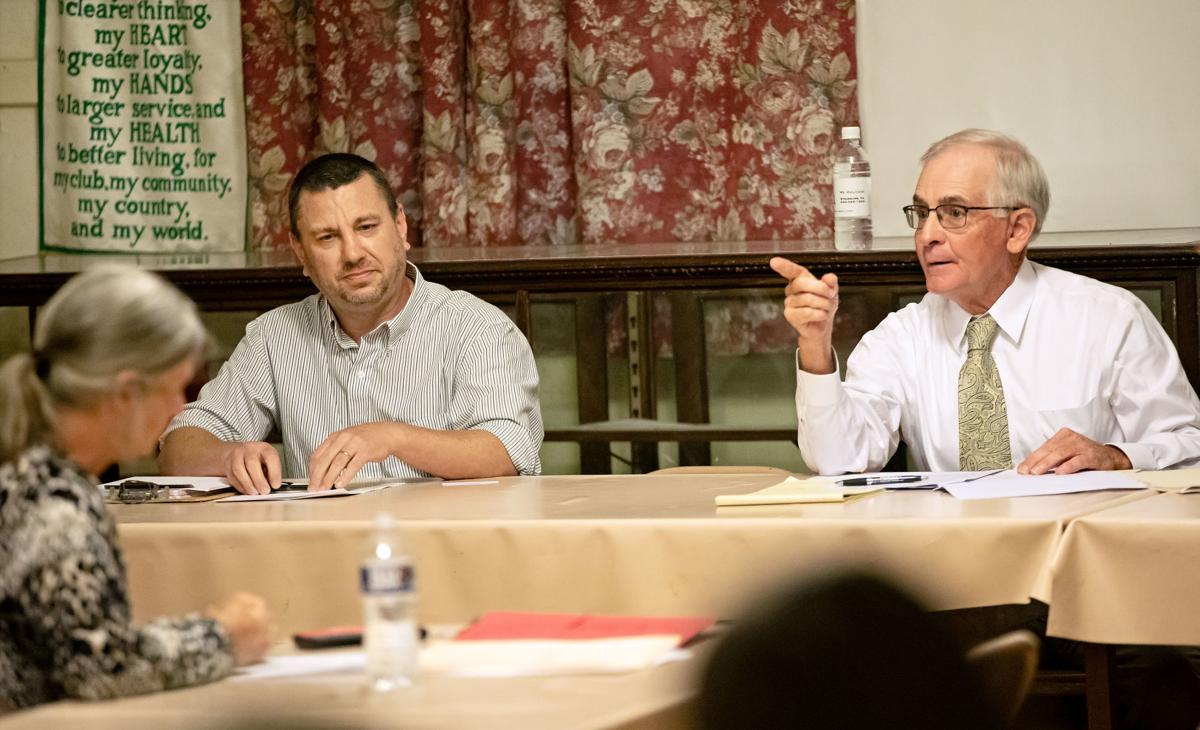 Randall Hamman, left, an independent candidate for District 5 on the Shenandoah County Board of Supervisors, listens as incumbent Republican Dennis Morris speaks during the public forum Wednesday night at Lebanon Church Community Center near Strasburg. 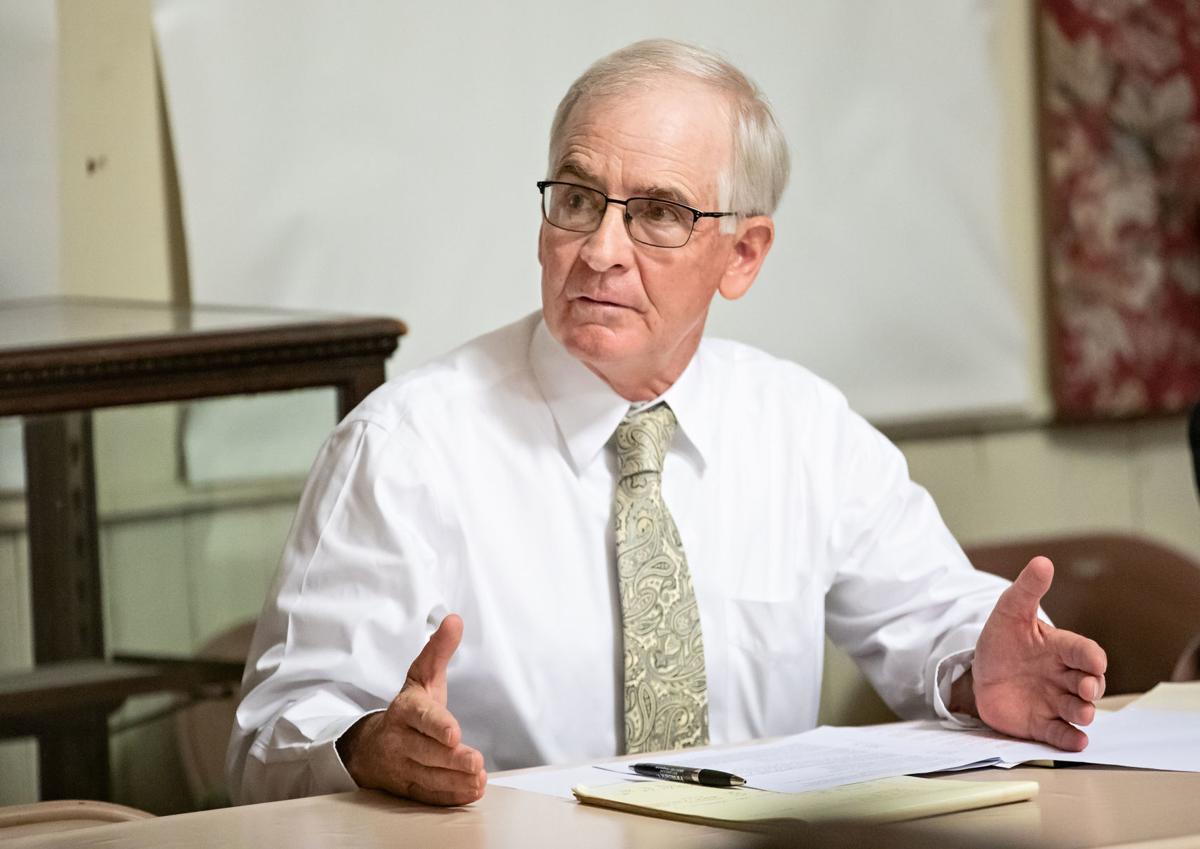 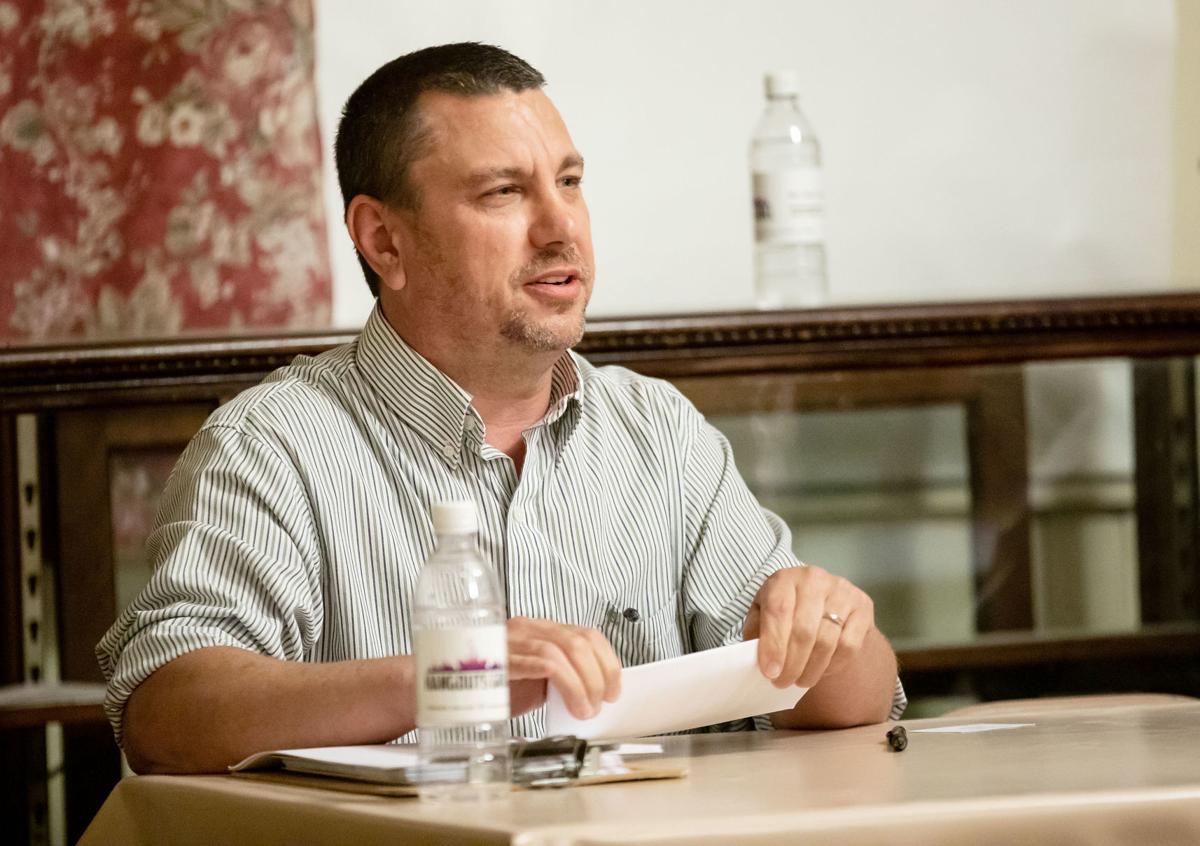 Randall Hamman, left, an independent candidate for District 5 Board of Supervisors, speaks during the political forum Wednesday night.

Randall Hamman, left, an independent candidate for District 5 on the Shenandoah County Board of Supervisors, listens as incumbent Republican Dennis Morris speaks during the public forum Wednesday night at Lebanon Church Community Center near Strasburg.

Randall Hamman, left, an independent candidate for District 5 Board of Supervisors, speaks during the political forum Wednesday night.

LEBANON CHURCH — The two candidates running to represent District 5 on the Shenandoah County Board of Supervisors squared off Wednesday night in a forum at the Lebanon Church Community Center.

Independent candidate Randall Hamman and incumbent Republican Dennis Morris discussed their views on the economy, first responders, and how involved the supervisors should be in school system decisions. Election Day is Nov. 2, although early voting at the voter registrar’s office started Sept. 17.

The forum was run by The Republican Women of Shenandoah County and the Shenandoah Freedom Caucus and moderated by local resident Bryan Gilkerson.

“I guess my forte is I’m a facilitator,” Morris said. “I can talk and try to compromise. You know a lot of times in life when you make a decision and you’re not exactly warm and fuzzy with that decision it’s because you’ve given something to get something. And over the years being a board member you’ve got to compromise.”

Each candidate was asked three questions about issues and were allowed a short time for rebuttal. The first question was about how they see the Shenandoah County economy today and what can be done to make it better in the future.

“Shenandoah County is open for business,” Morris said. “We’re thriving — Shenandoah County business-wise. We have a great economic development. (Shenandoah County Director of Tourism and Economic Development) Jenna French and her staff and the IDA works hand-in-glove. And we have done so much over the past year and a half with grant COVID money. A couple big things that people kind of take for granted is that the industries that have been here over the years they’re the ones that put meat and potatoes on our table. They’re thriving.”

Hamman said he feels that the residents aren’t getting enough for the money the county is spending.

“When I think about what’s going on in this county is I see the government is spending a lot of money and businesses aren’t coming — the businesses that we need,” Hamman said. “Factories, places where people can get jobs. In fact Strasburg turned away a business that they said it wasn’t bringing enough money for them. And I thought what’s that? What’s government for? Is it for us or for themselves? And right now I think we’re at a point where government works for themselves and they can care less about anybody else.”

The second question was about police officers and firefighters and howto make sure the county has enough of both.

Hamman said he didn’t know about any problems with firefighters or EMTs, but he feels like the county has always had plenty of police and that’s a good thing.

Morris in his rebuttal said recruiting is the key for the future of firefighters.

“Fire and rescue and law enforcement it all depends on the next 10 years, whether we can recruit volunteers and keep volunteers in our system,” Morris said. “We have great volunteers in Shenandoah County, we just don’t have enough of them. We’ve got to supplement the volunteers with paid staff.”

The final question was about the Shenandoah County Public School system and the role supervisors play with the schools, including providing funding.

Hamman said he believes there are problems with the schools.

“Our schools are a disaster,” Hamman said. “I mean they are literally a disaster. But we pump money in every single year, millions of dollars. And we get COVID funding. The thing people don’t get with these grants is they’re just like a loan, they come with conditions. And you got to do stuff like put a mask on your face forever. ... We have to get away from all the federal stuff and take it back within the county because, if not, then who’s funding our schools — us or the federal government?”

During closing remarks, Hamman said that the Board of Supervisors can and should make more budget cuts.

“Fire and rescue, police their budgets will not be cut — not one dime,” Hamman said. “I’ll give you my word right now they will not be cut by one dime. What will be cut is nonsense. There’s a ton of it and we all know it. At the end of the day everybody knows it. In the back of our minds we all know it. There’s a balance of what’s right and what’s wrong and what’s gray. Right now we have a Board of Supervisors that signs off on budgets. They don’t dig in deep enough, in my opinion, and there’s too much waste. There’s too much nonsense that we can’t afford.”

Registered voters in District 5 were allowed to ask the candidates questions.

The candidates were asked about how active they should be with the schools. Morris said that he does think it’s important to attend school functions when invited.

“I don’t set school policy,” Morris said. “I’m not going to micro-manage schools systems, but I’ve got to have the respect from the school board member that gets elected and vice versa,” Morris said. “I never turn down an invitation, unless I’m sick or something, to a school activity. I was at a tailgate party last Friday night with the FFA in Strasburg. I’ve never missed an FFA banquet in Strasburg since I’ve been elected. If you attend school functions, the people get a sense of that’s someone that cares about the schools — I can talk to them.”

One voter asked about getting involved with things like the mask mandate for schools. Morris said he would not do that, but Hamman said that he put a Facebook post up supporting the students who protested the mask mandate in August.

“The bottom line for me is it’s a matter of liberty,” Hamman said. “ ... It was my opinion that they were doing the right thing and I chose to stand with them. If you don’t agree with it, that’s fine. I understand and I respect that. But the point is that as a supervisor — I’m not a supervisor at the moment by the way — I would have done that whether I was running for this or not.”