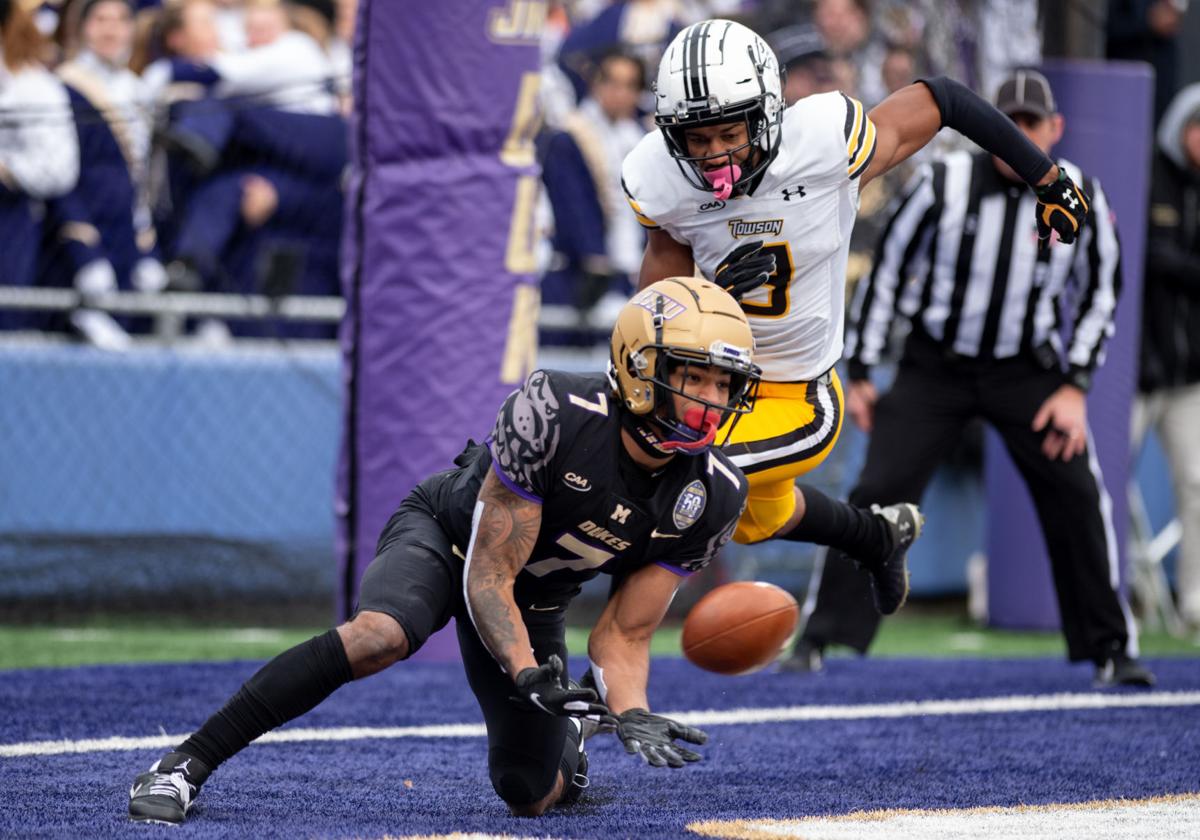 James Madison wide receiver Antwane Wells Jr. (7) reaches down for a touchdown catch during the first half of an NCAA football game against Towson in Harrisonburg on Saturday. 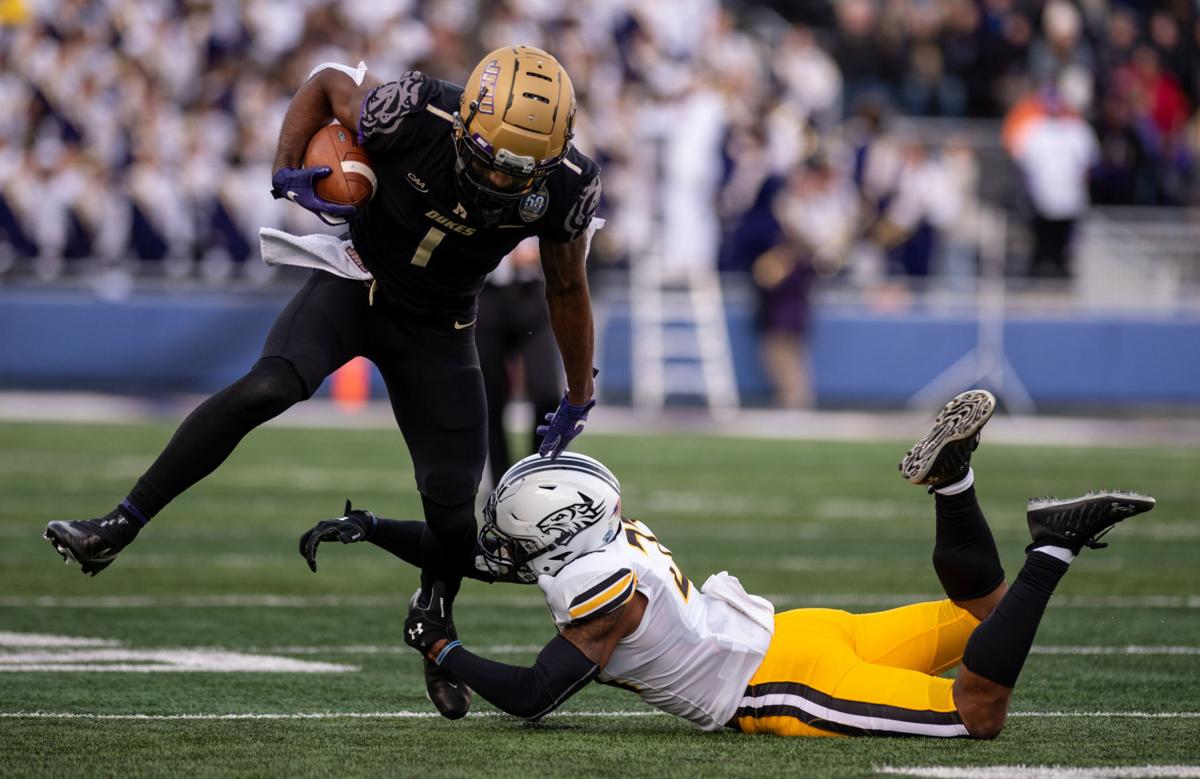 James Madison wide receiver Scott Bracey (1) evades a tackle from Towson cornerback Jirhe Love (23) during the first half of an NCAA football game in Harrisonburg on Saturday.

James Madison wide receiver Antwane Wells Jr. (7) reaches down for a touchdown catch during the first half of an NCAA football game against Towson in Harrisonburg on Saturday.

James Madison wide receiver Scott Bracey (1) evades a tackle from Towson cornerback Jirhe Love (23) during the first half of an NCAA football game in Harrisonburg on Saturday.

James Madison didn’t look in the rearview mirror as it sped out of the CAA Football conference, pounding Towson 56-10 to close out the regular season Saturday at Bridgeforth Stadium.

The Dukes (10-1, 7-1 CAA) clinched a share of the conference crown and made a final emphatic statement before Sunday’s FCS Playoff selection show. JMU entered the day ranked second in the Stats Perform FCS Top 25 poll and was essentially assured a national seed and first-round bye with the victory.

JMU also received some help from No. 7 Montana, which knocked off No. 3 Montana State on Saturday, giving the Dukes an even stronger case for the No. 2 playoff seed in their final season as a member of the CAA and the Football Championship Subdivision.

“We’ve been No. 2, I don’t see why we wouldn’t be two and have all home games (in the playoffs),” JMU coach Curt Cignetti said after guiding the Dukes to their sixth conference title in the past seven years. “Of course last spring we were No. 1 in the country and beat a Top 25 team, then somehow dropped to No. 3. Figure that one out. But I expect us to be No. 2.”

Redshirt-senior quarterback Cole Johnson helped rewrite the school record book, completing 21 of 25 passes for 363 yards and six touchdowns, matching his own single-game record. That gave him 32 scoring throws for the season, topping Vad Lee, who threw 30 touchdowns over the course of 13 games in 2014.

Running back Solomon Vanhorse found the endzone three times, once each rushing, receiving and on a kick return. Wideout Antwane Wells Jr. also had three touchdown grabs and the Dukes went four-for-four with touchdowns on red zone attempts.

The JMU defense had four takeaways and sacked Tigers quarterbacks three times as the Dukes starters shut Towson down in the second and third quarters.

The Dukes owned a 7-0 lead before their offense ever took the field with Vanhorse finding a seam up the middle to take the opening kickoff 94 yards for a score. It was Vanhorse’s first career kickoff return for a touchdown and JMU’s first since 2019.

“The return was actually supposed to be to the right, but I saw the hole in the middle,” Vanhorse said. “They left a big crease in the middle and they let me do what I do, basically.”

It wasn’t long before JMU had clicked in all three phases of the game. Diamonte Tucker-Dorsey came up with an interception for the Dukes on Towson’s first possession, setting up Johnson and the offense at the Tigers’ 26-yard line.

Five plays later Johnson hit Wells near the back of the end zone for an eight-yard touchdown pass that had the Dukes ahead by 14 points less than four minutes into the game.

“Every week we’re showing Cole he’s got a strong group of receivers here,” Wells said. “We can’t be guarded and we’re going to prove that every week.”

Towson (4-6, 3-5) caught a break on its next drive to make sure the Dukes couldn’t put the game out of reach quite so early. It appeared JMU had thrown Tigers’ running Jerry Howard Jr. down at the line of scrimmage, but Howard landed on a Dukes defender without ever touching the turf and bounced back up for a 40-yard gain.

The Tigers took advantage with an eight-yard touchdown pass from Chris Ferguson to Caleb Smith to cut JMU’s lead in half midway through the opening period. Towson’s threat to make a game of it was short lived, however.

Johnson was absolutely on fire in the second quarter, hitting Kris Thorton in stride for an 83-yard touchdown strike to open the period, one of four touchdown passes in the quarter. By the time the first half ended, Johnson had matched his own school record with five TD tosses in the half.

“Understanding what works for us and how to exploit defenses in certain ways, overall as a collective unit we’ve been hitting our stride,” Johnson, who now has 30 more touchdowns than interceptions, said. “We’ve been so comfortable that we knew what was going to happen when we see certain coverages.”

JMU’s 42-7 halftime lead only got uglier before the Dukes took Johnson and several other starters out of the game as the fourth quarter began.

“We wanted to have a dominant four-quarter performance today and we got it,” Cignetti said. “We emptied the bench in the fourth or it could have been worse. We took it to them pretty good.”