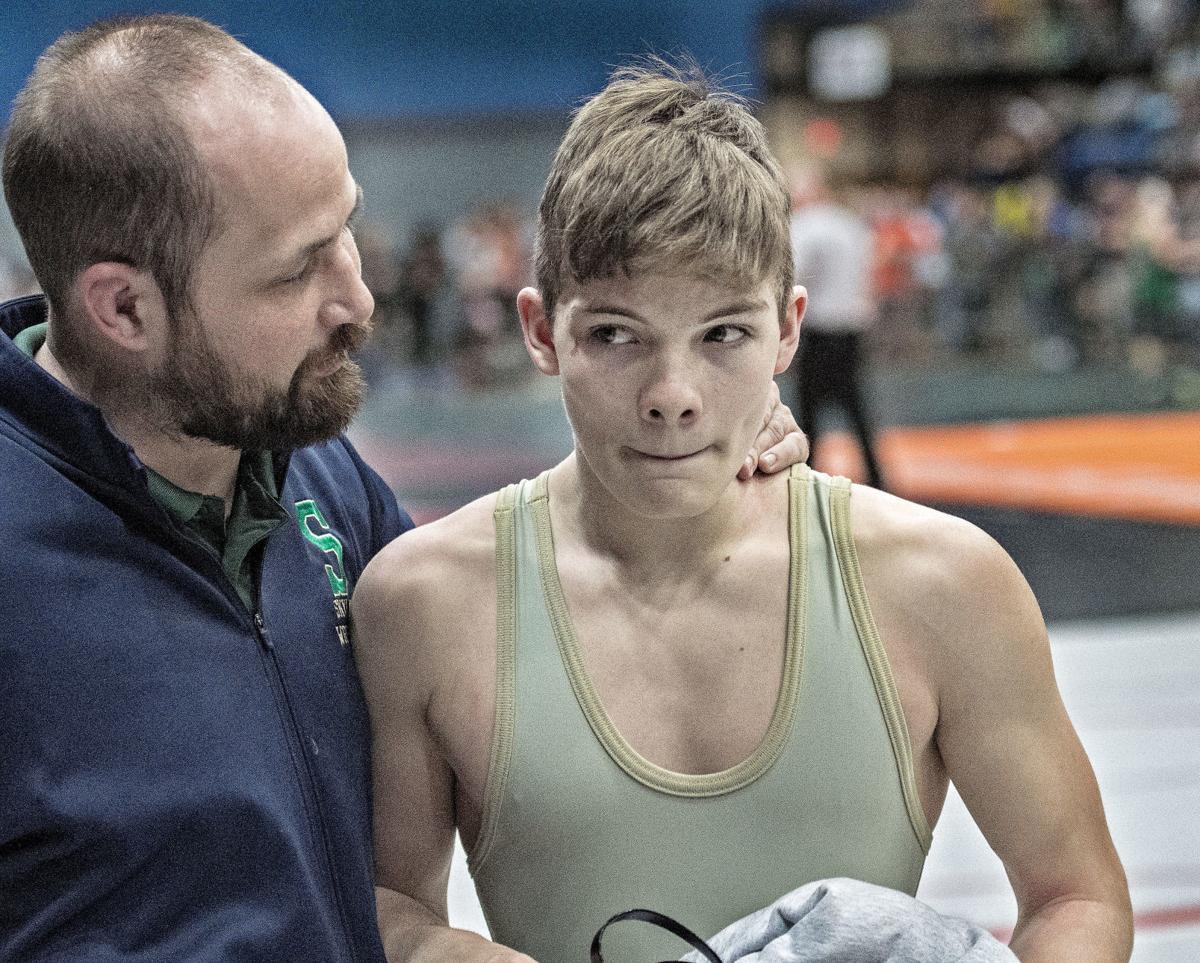 Skyline coach Kyle Symons congratulates Tyler Davis after winning his consolation finals by a pin against Garrett Good of Brockville in February in Salem. Davis placed third in the Class 3 state tournament. 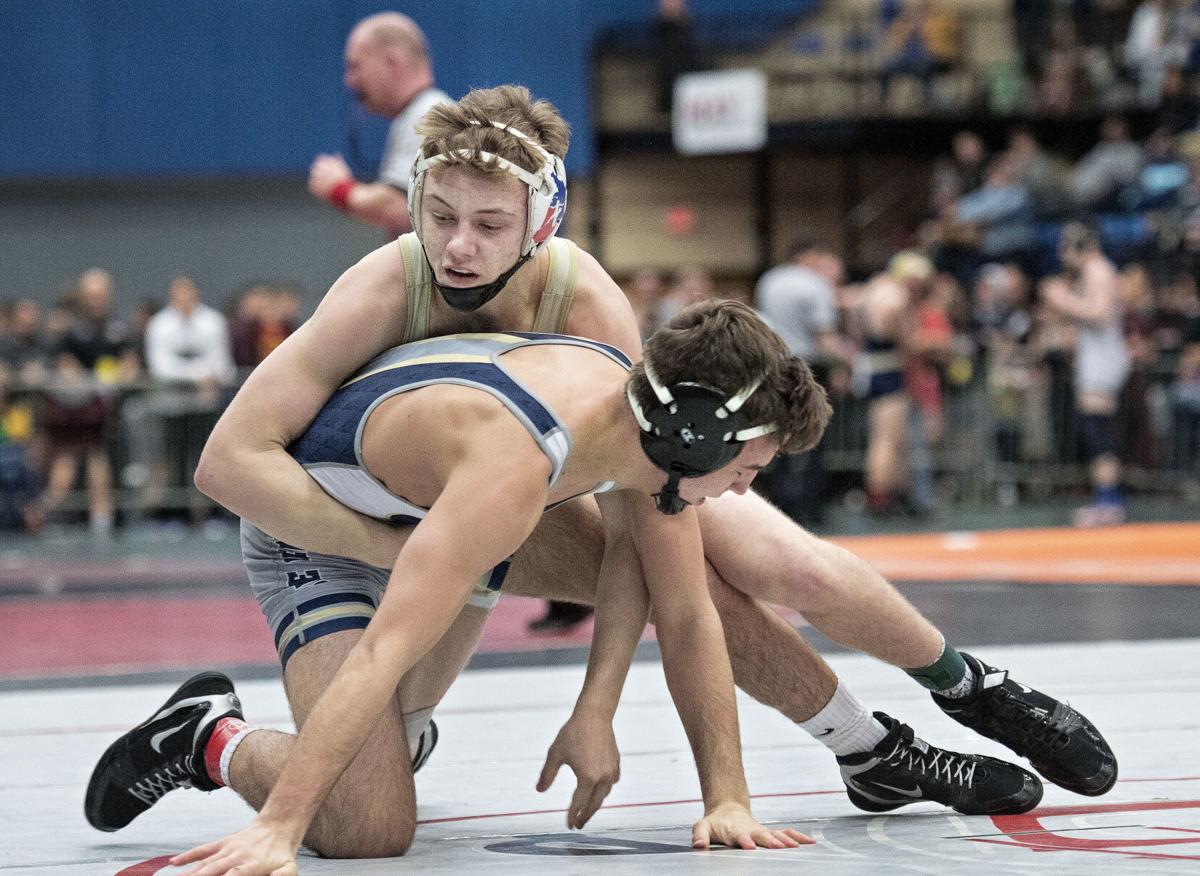 Skyline coach Kyle Symons congratulates Tyler Davis after winning his consolation finals by a pin against Garrett Good of Brockville in February in Salem. Davis placed third in the Class 3 state tournament.

FRONT ROYAL — Skyline’s 2018-19 wrestling season, the first under head coach Kyle Symons, ended up as one of the most successful years in program history last winter, with the Hawks bringing home a Region 3B runner-up trophy and finishing fourth at the Class 3 state tournament, their best-ever finish.

The Hawks, whose starting lineup from last season remains largely intact, are aiming even higher in their second year under Symons.

Senior Ethan Gue spoke for all of his teammates last week when he listed Skyline’s goals for the 2019-20 season: win a Northwestern District title, win the program’s first regional championship and place among the top two at the state tournament, a feat that would net the Hawks their first team trophy at the state level.

In short, the Hawks want to have their best season ever.

“They have it in their minds that they want to be the best team this school’s ever seen, but with that comes a lot of pressure that goes with it,” Symons said last Wednesday. “But at the same time they know the capability’s there. Some of the stuff we’re shooting for from a team standpoint, they know they’ve got to put in the work to be able to do that. They know that we’ve got an opportunity to win regionals this year and we want to be able to come home from states with a team trophy, but even with that, that’s bare minimum from where we’re at. We’re trying to win a team title at all levels and to do that we have to approach it right.”

So far, the Hawks have shown the correct approach, according to their head coach.

Symons said that in the three weeks that Skyline has been in the wrestling room for official preseason workouts, Skyline’s wrestlers have produced a job-like atmosphere in the practice room. The Hawks are focused on the task at hand, he said, seem to realize the work it will take to cross their loftiest goals off the list come February and are holding themselves accountable in practice.

“I was actually really surprised at how we’re doing,” senior Morgan Robinson said of his early impression of this year’s Skyline squad. “Randomly I look up and everyone’s like two times better than they were last year. Even I was actually surprised with myself, I’m just a lot better. I think state champ is gonna be the goal for every single person in this room, to be honest. I don’t really know how we’ll do as a team, I’m not sure, but I know that a lot of individuals will do really well.”

Individual success on the wrestling mat will add up to team-wide success, and the Hawks certainly look like a squad built to make some noise this season.

Junior Tyler Davis — a state runner-up as a freshman two years ago and a two-time regional champ at 106 and 113 pounds — and seniors Brandon Ahlemann (126), Anthony Domino (145) and Ethan Gue (220) each won individual Region 3B tournament titles while Skyline finished second to Brentsville in 2018-19. Robinson, a regional runner-up, joined that quartet in earning a medal at the Class 3 state tournament in Salem.

Symons noted that Ahlemann and Robinson, who have a combined record of 266-66 in their high school careers, could become the first wrestlers in Skyline history to win medals at the state tournament in all four years, should they achieve that feat this winter.

Skyline’s seniors, who have been working for the past three years to get to this moment, would love nothing more than to unseat Brentsville at the regional level and challenge the likes of Christiansburg and New Kent in the state tournament.

“After this, high school wrestling’s over,” said Ahlemann, who has won back-to-back regional titles at 113 and 126 pounds but hasn’t finished higher than third at the state tournament. “Some of us are gonna go on to college and wrestle and some of us aren’t. Either way, we’ve missed out on what our goals were. I mean, we expected to win state titles and we haven’t accomplished that, so this is the last year, win or lose. I’d like to end it off with a state title and I’m sure all the other seniors would too.”

In all, Skyline returns eight of its nine state qualifiers from a year ago, a list that includes sophomore Josh Domino, senior Wyatt Spiker and junior Chris Moin.

Symons noted that Josh Domino should be improved after failing to win a match at the state tournament as a 106-pound freshman last season and added that Moin, who wrestled at 195 last year and is one of the Hawks’ handful of late arrivals from the football team, looks like a better athlete than he was last season. Symons also said sophomore Alex Sotelo has “improved a ton” and mentioned junior Brayden Williams as another who looks primed to take strides this season.

Symons noted that three freshmen — lightweights Hunter Salomon and Phoenix Alyea, and Dustin Gue — had success at the middle-school level and could jump into the starting lineup and do some “really good things” this season.

“The way it’s designed, we want our guys to make jumps, leaps and bounds, and we had a lot of guys that were in here in the offseason putting in really good work. They’ve improved,” Symons said. “Those guys are hungry. Last year, some of those guys either didn’t qualify for states or they were 1-2 at states, 0-2, that type of range. There’s not a person in this room right now that was in our lineup last year that doesn’t have the expectation to place. We have 14 kids up and down the lineup that their goal is at least to place at the state tournament. If we can meet 75, 80 percent of that, we’re in pretty good shape. Last year, we’re fortunate enough to have six state placers. I think there’s definitely some capability for some more and we’ve got some guys with intentions of winning.”

The leadership dynamic also changes a bit for the Hawks, who have gone from having one senior on their roster to seven this season.

“Grady was a great captain for us and he did a great job, but I think our seniors this year, we’re a good group,” Ahlemann said. “We’ve got seniors all throughout the lineup so there’s guys that can connect literally to every weight class. That’s good because you have leadership in every position there. I think the seniors that we have, they’re good people and they’re obviously good at wrestling. I think from a leadership standpoint this is probably the best year I’ve been here (for), so I’m looking forward to the season.”

Given Skyline’s success last year, the Hawks figure to have a target on their backs in the Class 3 Northwestern District and in Region 3B, something that wasn’t necessarily the case last season.

“The expectations might be higher but they’re higher because these kids are putting in the work they need to,” Symons said. “It’s not anything that’s outside pressure. It’s pressure they’re putting on themselves, but they’re doing the work that’s associated with that pressure. Like to me, that pressure’s not a real thing unless you allow it to be. They don’t feel that pressure because they’re putting those expectations on themselves. Our expectation as a coaching staff isn’t any different than what it was last year. We want to improve every day in here and we want to compete as best we can with the top programs. That was our goal all last year and we beat some really good teams along the way and we lost tight to some really good teams along the way. It’s a daily expectation that these guys put in the work that they know they’re capable of, and as long as they’re meeting that daily expectation, they know that they’re prepped right for those big-match moments.”