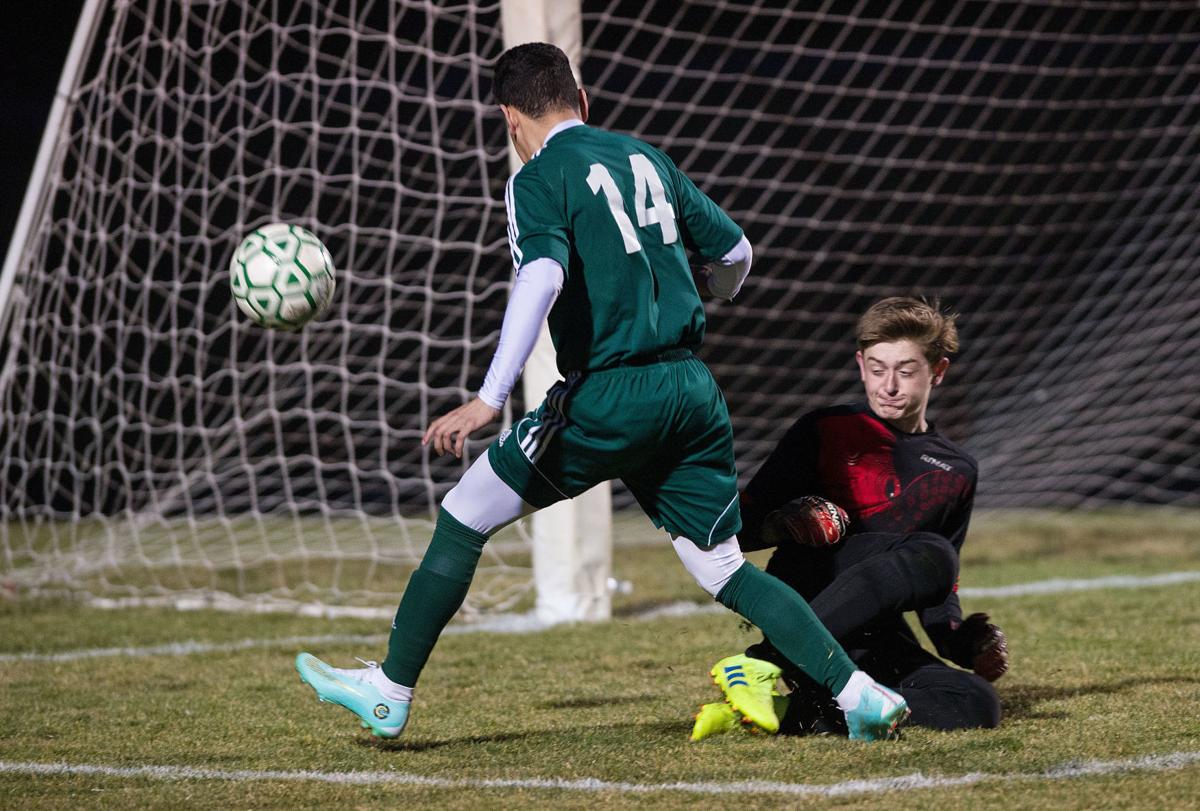 Strasburg goalkeeper Daniel Eyring thwarts a scoring attempt by Skyline’s Julian Sanchez during a game last season. Eyring was one of two seniors on the team this season. 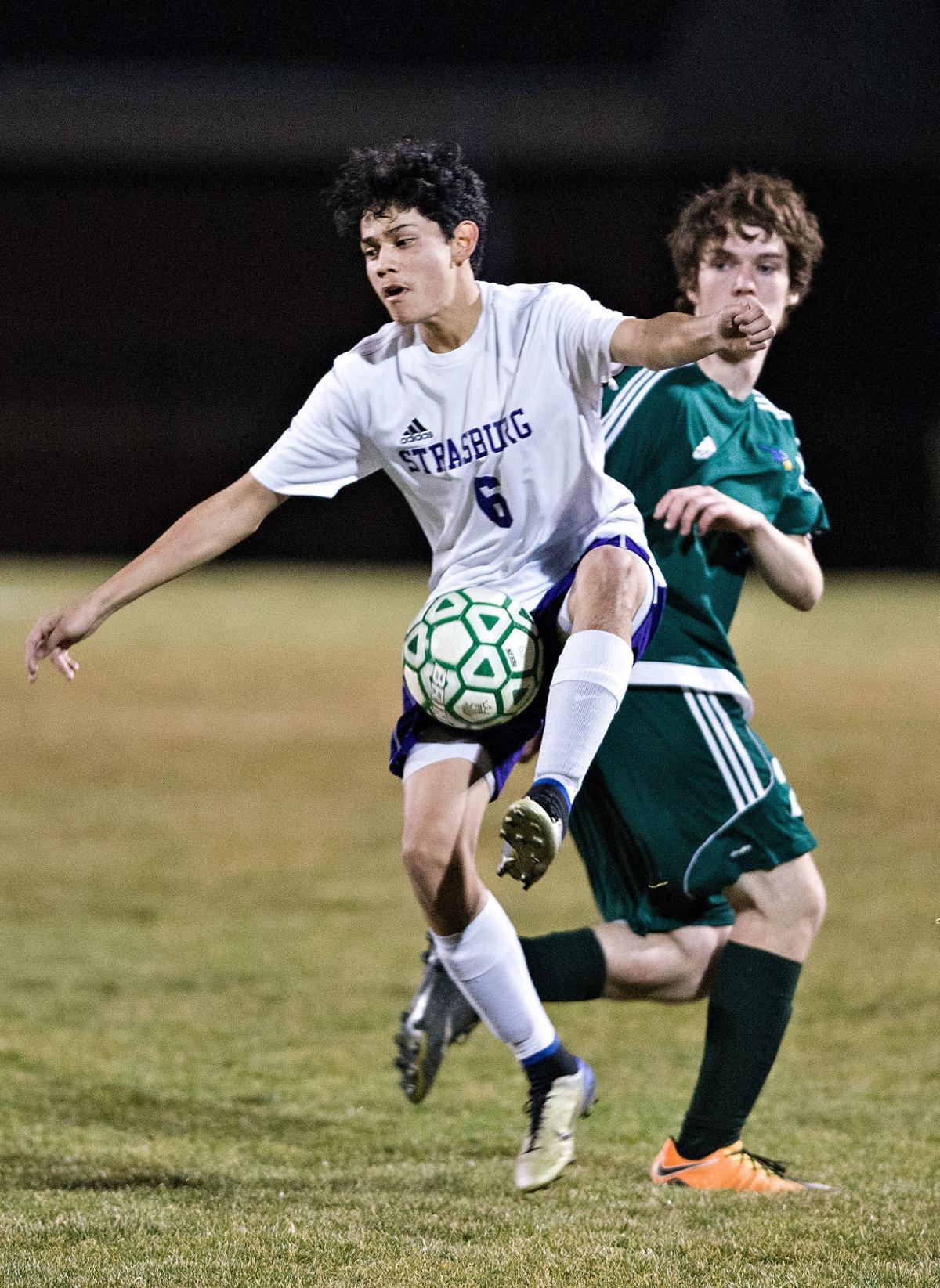 Strasburg’s Christian Marquez kicks the ball as Skyline’s Lukas Leon-Nolan defends in a game last season. Marquez is one of two seniors on the team this year and showed strong leadership for the team before the COVID-19 pandemic ended the season.

Strasburg goalkeeper Daniel Eyring thwarts a scoring attempt by Skyline’s Julian Sanchez during a game last season. Eyring was one of two seniors on the team this season.

Strasburg’s Christian Marquez kicks the ball as Skyline’s Lukas Leon-Nolan defends in a game last season. Marquez is one of two seniors on the team this year and showed strong leadership for the team before the COVID-19 pandemic ended the season.

Strasburg's boys soccer team only had two seniors on this year's squad but they were both valuable to the team's success.

Daniel Eyring and Christian Marquez were big leaders on the team and first-year coach Betsy Munson said she doesn't know what she would have done without them.

"They both really showed a lot of leadership," Munson said. "I can't say enough about those two guys. I only had three weeks with them, but I am grateful that we got to spend a little bit of time with these guys."

Munson said that she has a small car and Eyring volunteered to bring the equipment to practice at Signal Knob Middle School every day because he had a pick-up truck.

Munson said they both did a lot of little things that really meant a lot. As they would break from the huddle they would usually say '1-2-3, Rams.' However, Marquez decided they should add '4-5-6, family.'

"The past years of the teams that we had maybe the bonds wasn't as tight," Marquez said. "There was a difference between the classes ahead and the classes below. So I wanted to put in the '(4-5-6) family' because all of us as a team were pretty close and pretty tight. So I wanted to make it seem a little more special because this team – we wanted to work hard and put a name out there for all of us."

Marquez has played at forward the past several years, but Munson said she was playing him more on the wing this season and he had no problem with the switch.

Marquez said some of his favorite memories from the team were beating Madison County in dramatic fashion twice in the Bull Run District tournament. He said his other favorite moment was scoring a goal on his best friend's, who had passed away, birthday.

Marquez said he's played soccer since he was in fourth grade and he loves everything about the game.

"I like getting out on the field and just running," he said. "Letting go of everything that's outside of the field. And just playing with my team, because I just like working with my team and getting things done."

Eyring started as the varsity goalkeeper last year for the Rams. He had 90 saves and one shutout last season.

He said that he's played soccer for a long time and he enjoys the team aspect of it.

"The team bonding would be the best part for me, and always having to work as a team," Eyring said. "It's more of a team sport."

Marquez said he and Eyring have a good relationship and were a good team as seniors.

"I played soccer with him since we were little," Marquez said. "He used to be my goalie back then as well. I have a pretty good connection with him. I think that it's pretty unique that it's only two of us that are seniors, and that me and him have a good bond. We have a good bond with the lower grade people on our team. I think that's what really makes us together. I think that's really put us together this year because we were making pretty good progress as a team overall until (the COVID-19 pandemic)."

Eyring, who is planning on enlisting in the Army, said he's learned a lot from playing soccer that he can take with him in his future.

"I learned a lot of leadership skills," he said. "I learned that team work definitely will always work better than trying to do it yourself. I learned that a team can be one of the better things that you can ever have."

Marquez is planning to attend Marymount University in Arlington and play for the men's soccer team there.

He said he is excited that he still play soccer in college.

"I'm very excited," Marquez said. "I still have that in the back of my head, because I'm so thankful that I still have more years to be able to play."