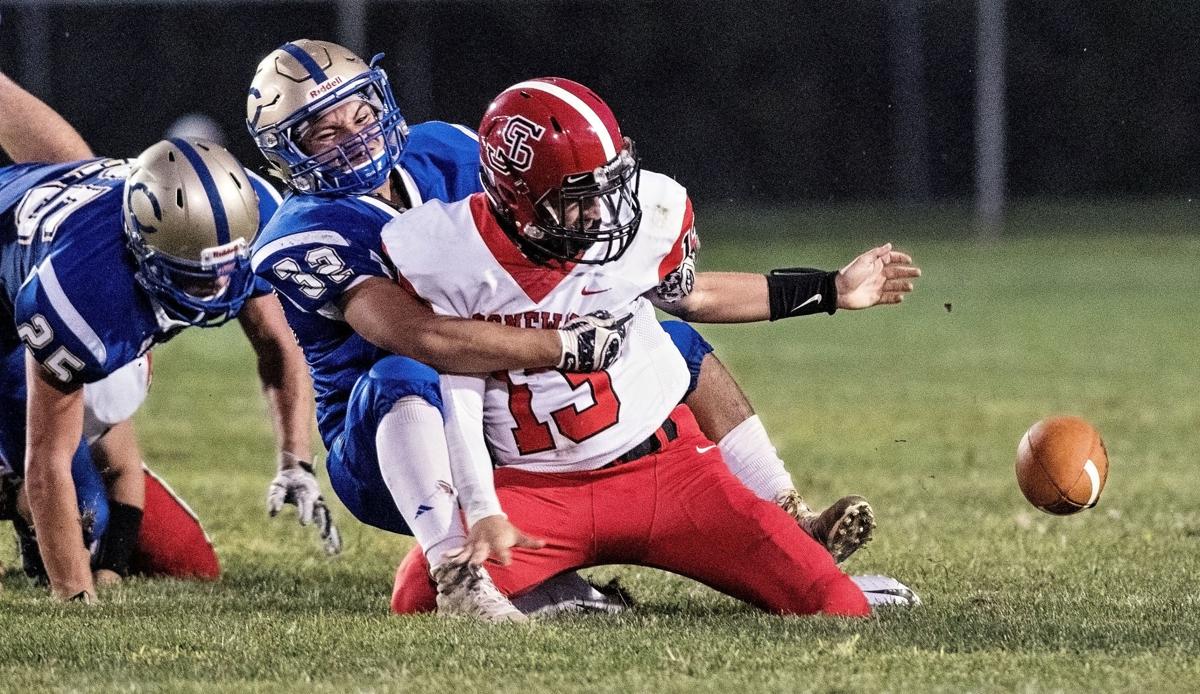 Central’s Gerson Sorto Lopez forces a fumble as Stonewall’s Jacob Lemon watches the ball roll out of his hands during football action Friday night in Woodstock. 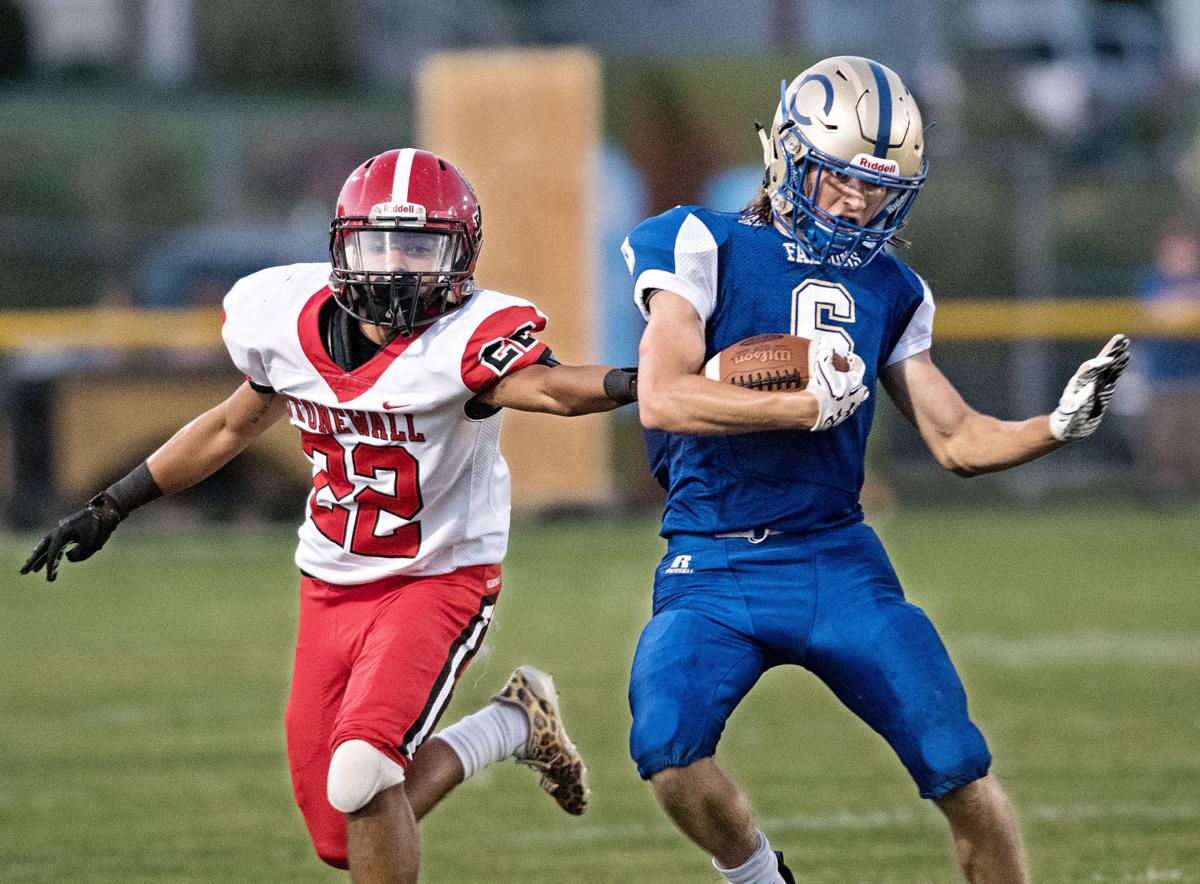 Central’s Landon Shockey tries to avoid a tackle as Stonewall’s Tyler Vanderpuye pushes him out of bounds during first half action Friday night in Woodstock. 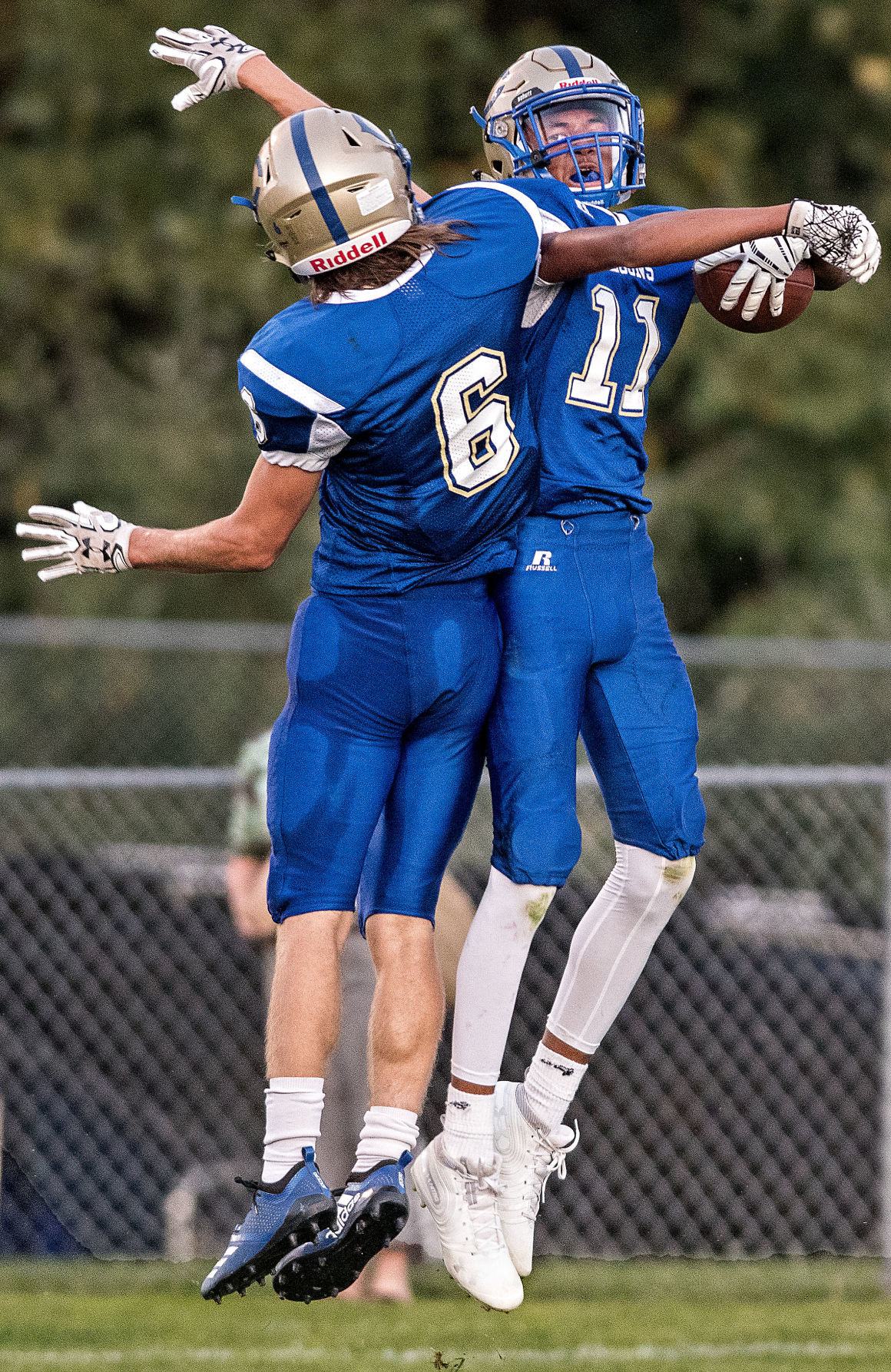 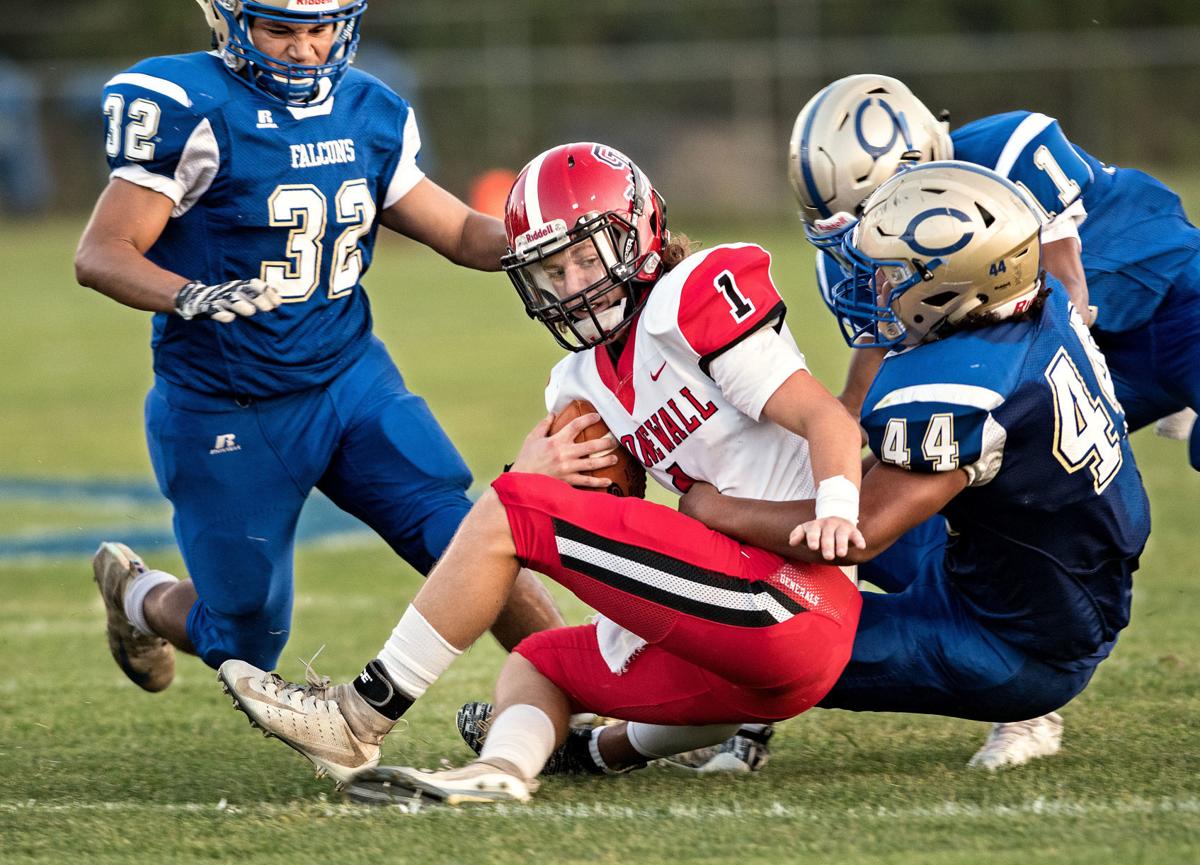 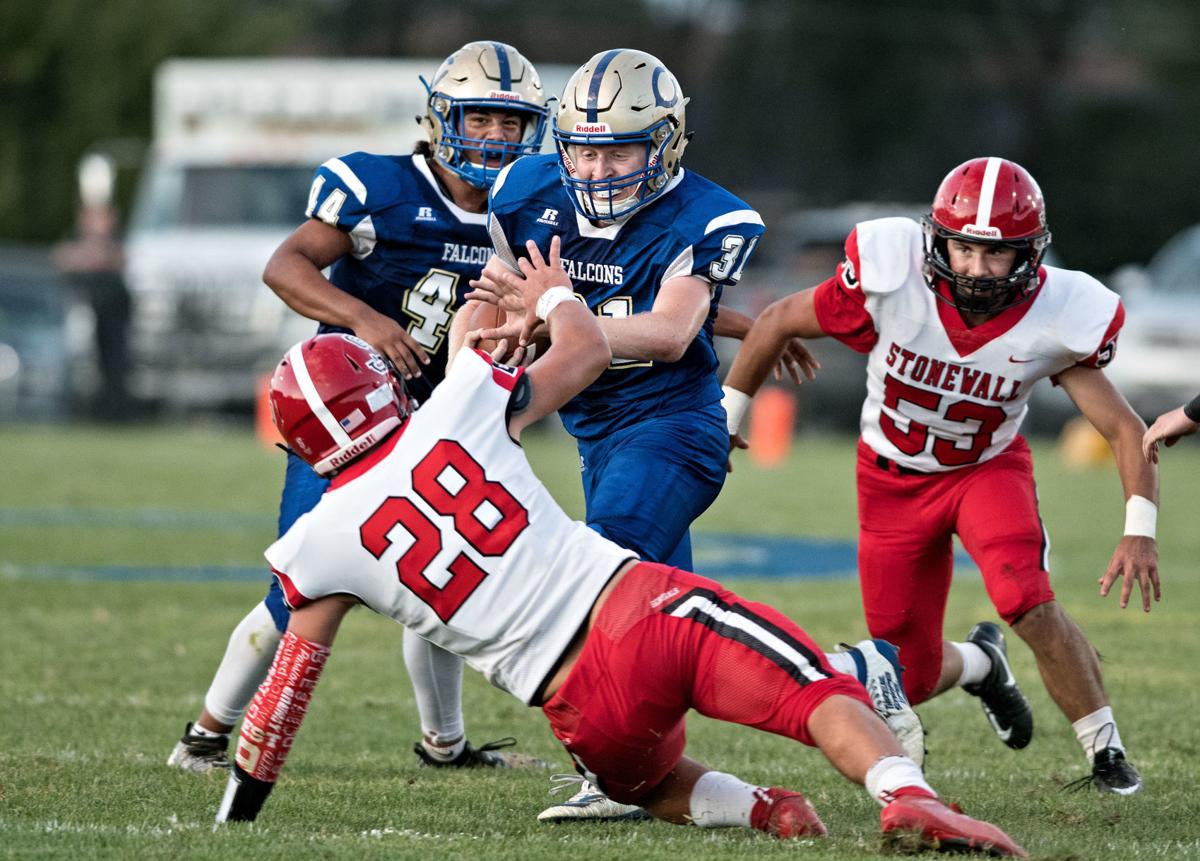 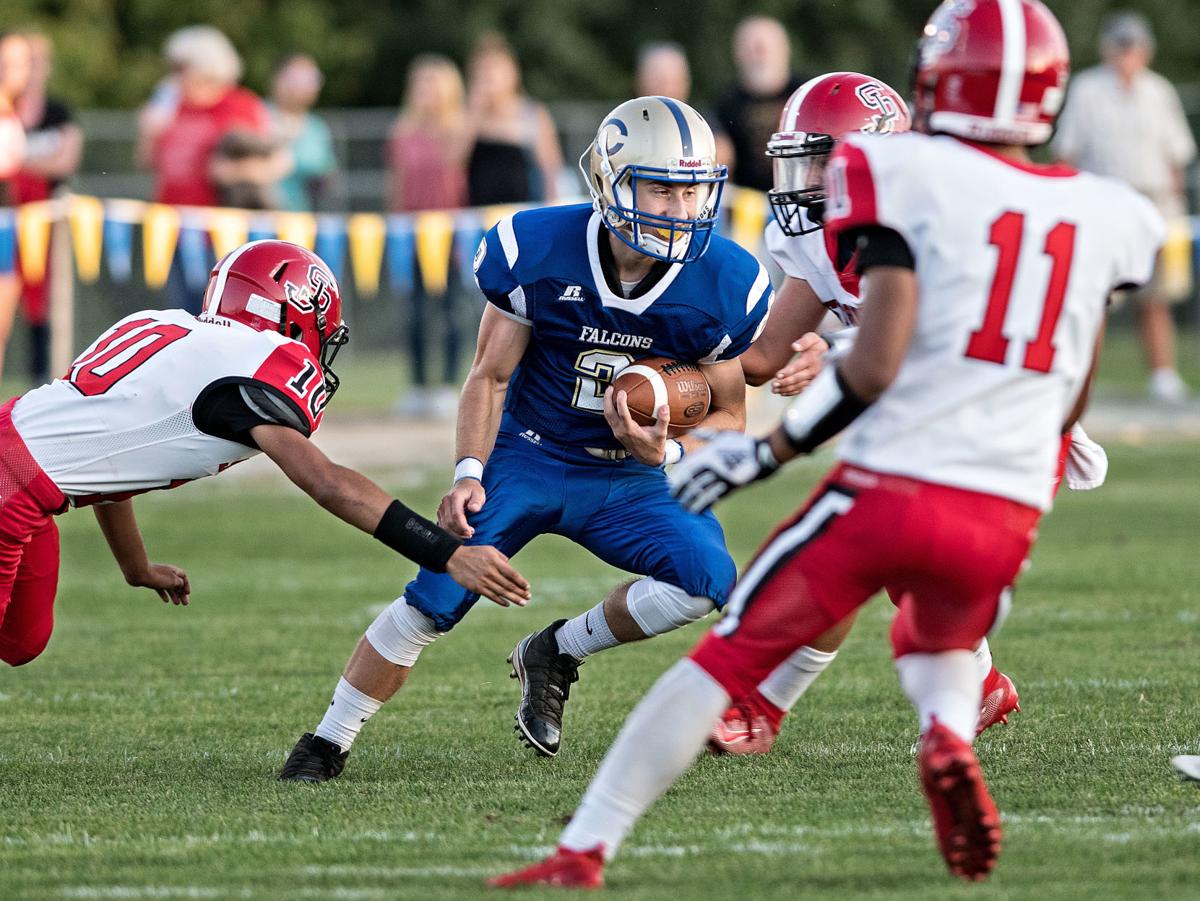 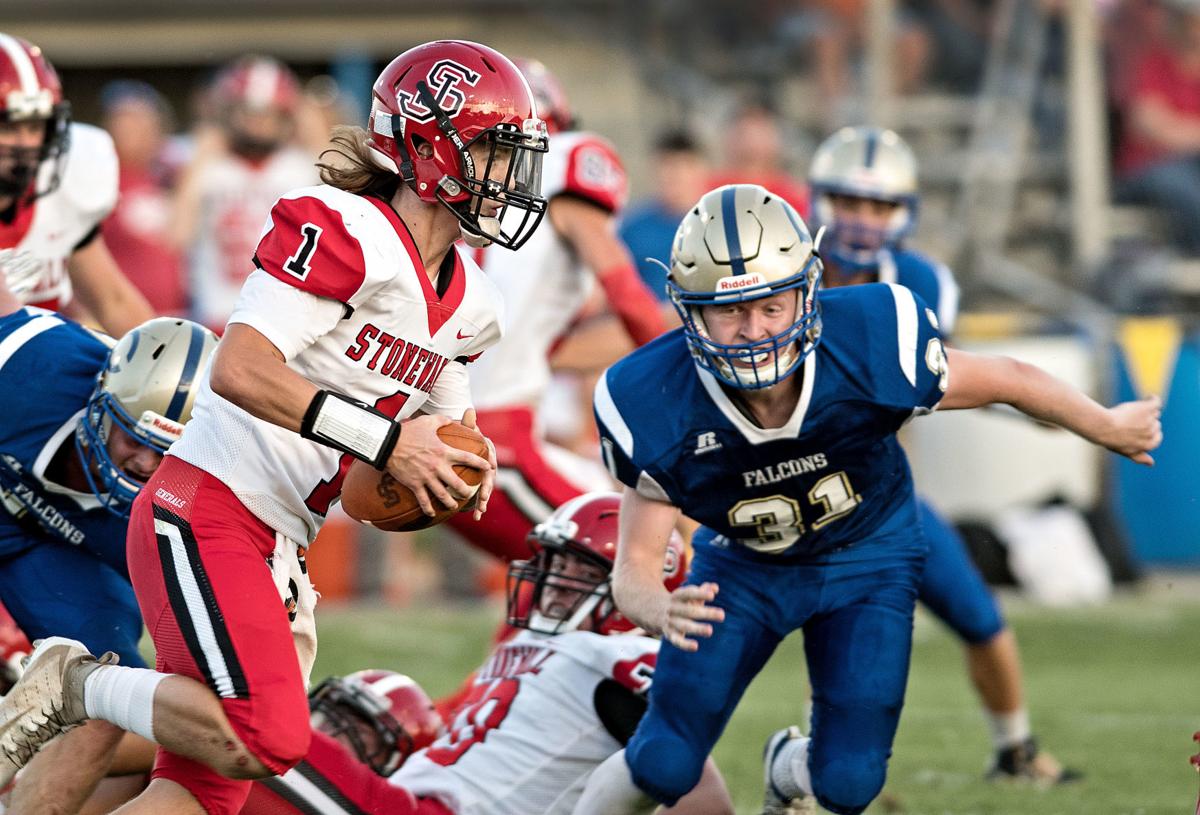 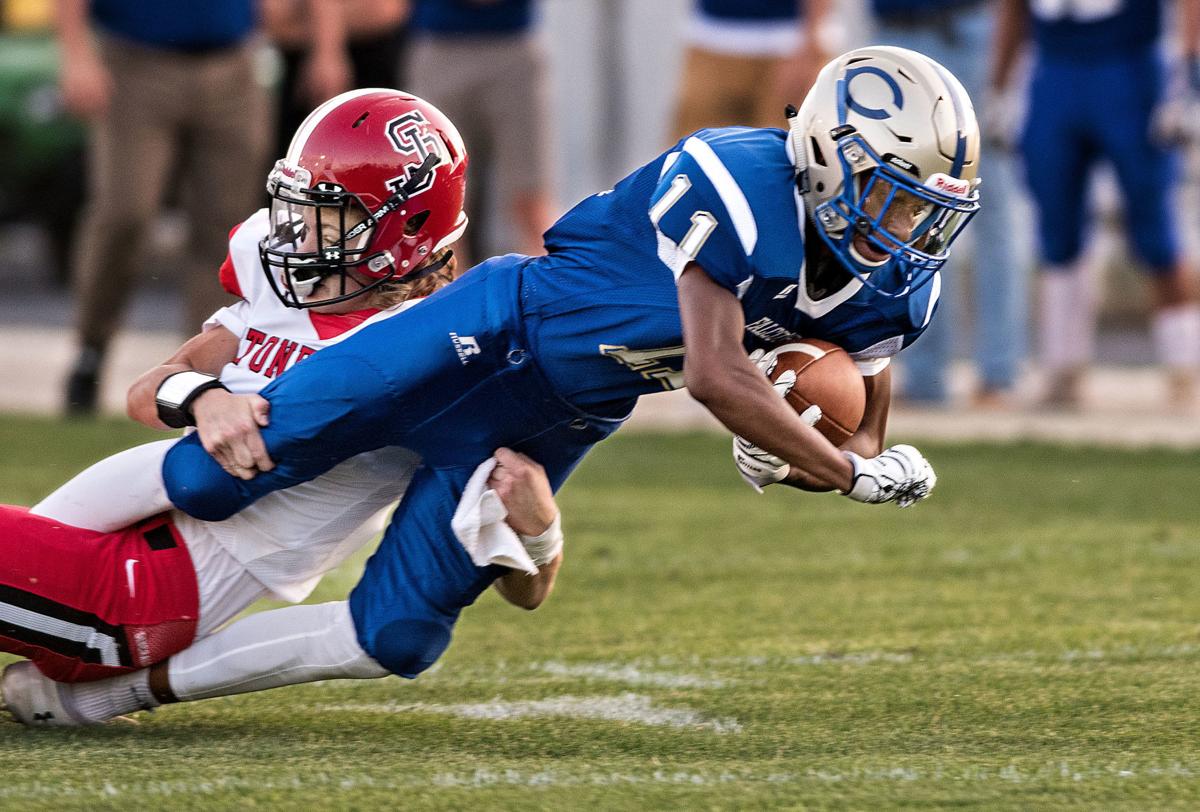 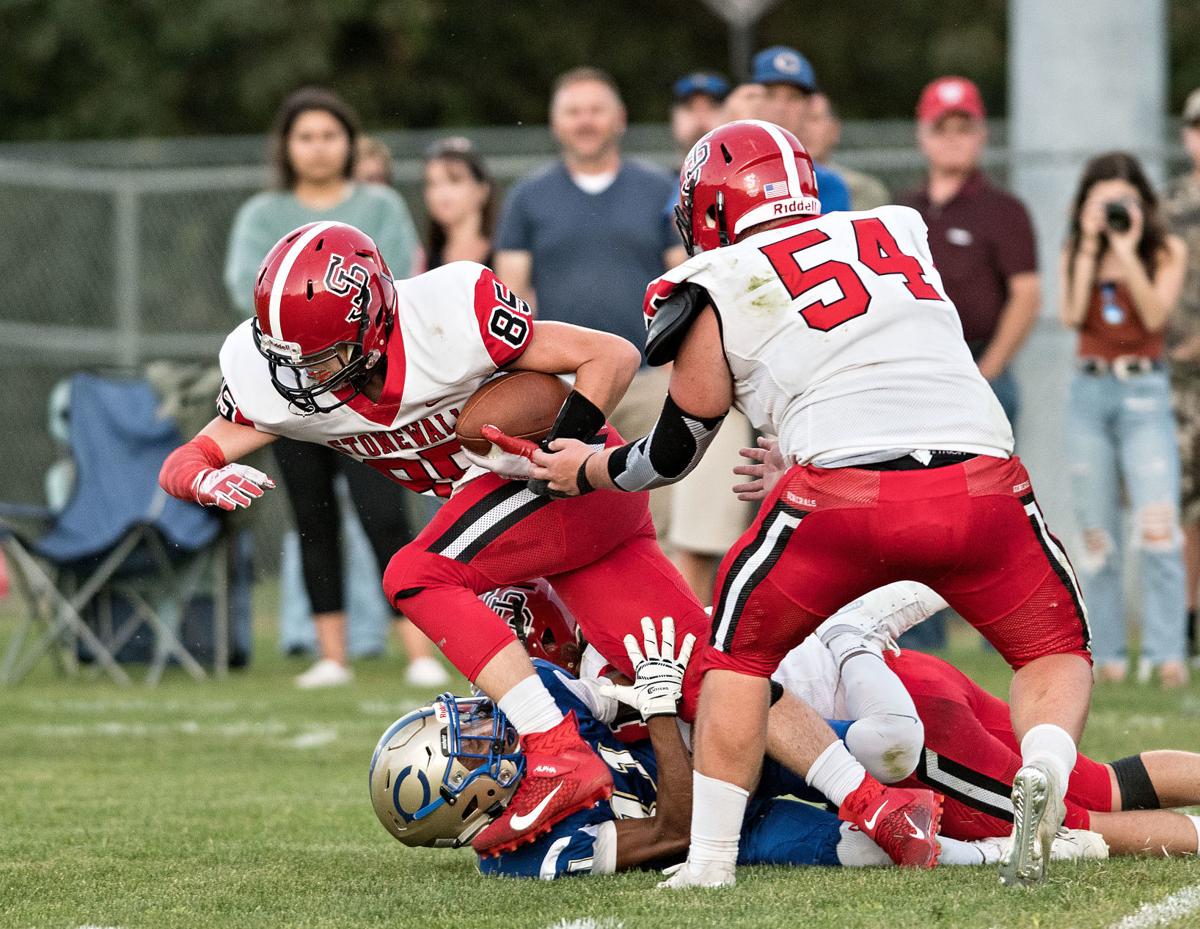 Stonewall’s Justus Proctor comes up with an interception as Central’s Brevin Scott pulls him down on the tackle during last week’s football game in Woodstock. 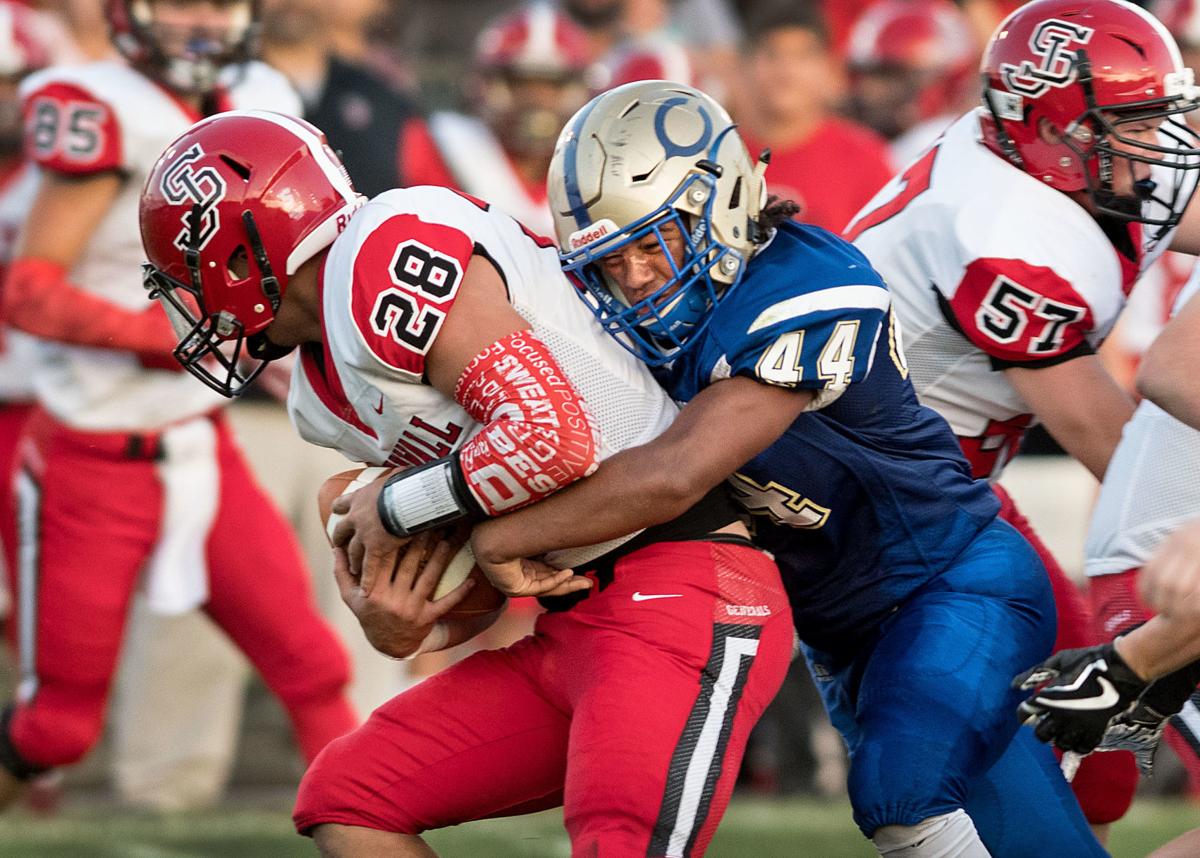 Central’s Gerson Sorto Lopez forces a fumble as Stonewall’s Jacob Lemon watches the ball roll out of his hands during football action Friday night in Woodstock.

Central’s Landon Shockey tries to avoid a tackle as Stonewall’s Tyler Vanderpuye pushes him out of bounds during first half action Friday night in Woodstock.

Stonewall’s Justus Proctor comes up with an interception as Central’s Brevin Scott pulls him down on the tackle during last week’s football game in Woodstock.

The Falcons, eager to bounce back after a Week 1 loss to Luray, romped past Stonewall in their home opener on Friday night, piling up eight touchdowns en route to a 55-8 feel-good win that Central hopes will get it back on track.

Central (1-1) has now won eight straight games over Stonewall (0-1) and has beaten the Generals by an average of 40 points over the last seven meetings. The loss was Stonewall’s 39th in a row and the first this season after the Generals had a bye in Week 1.

“It was a big win,” Falcons senior quarterback Kelan Hoover said. “I mean, last week we all thought we played hard and played good, but I think this week coming in we knew we were gonna put our feet on the pedal even more. We were just gonna push it. The scoreboard did the talking.”

On a night that saw eight Falcons contribute to the team’s eight touchdowns, Hoover was Central’s brightest offensive star. The senior, making his second varsity start, completed 9 of 14 passes for 144 yards, two touchdowns and an interception. He ran for 55 yards and another score, an impressive 20-yard scramble during which Hoover tip-toed along the sideline while avoiding a tackler before diving across the pylon to send the Falcons into halftime with a 35-0 lead.

“I was talking about it all week, I wanted to play as hard as I could,” Hoover said. “My first home game starting, I just wanted to show out and I think I did pretty good.”

Hoover completed passes to five different players, including a 44-yard touchdown strike to a wide-open Brevin Scott (three catches, 62 yards) midway through the second quarter and a 23-yard scoring toss down the seam to tight end Logan Yew on the first drive of the third quarter.

“Kelan played big tonight,” Falcons head coach Mike Yew said. “... Kelan’s got a college arm, there’s no question in my mind. He’s definitely a DIII quarterback or maybe a little higher, and when he gets in a system that really can teach him all the ins and outs of what’s going on, he could be a college quarterback, there’s no doubt in my mind. He’s got a Saturday afternoon arm.”

Hoover paced an offensive outing that saw Central outgain the Generals 365-161 in total yardage. The numbers weren’t even that close, as 89 of Stonewall’s yards came on its final drive of the game against Central’s second-team defense.

The Generals’ triple-option offense, led by fullback Rion Dennison’s 55 yards on 10 carries, finished with 123 yards rushing on 35 carries (an average of 3.5 yards per rush). Central held Stonewall to 31 first-half yards and recovered three fumbles on the Generals’ first six possessions.

Stonewall quarterbacks Jacob Lemon and Austin Ritchie, who rotated series throughout the game, combined for four pass completions on eight attempts in the loss. One of those completions went to an ineligible receiver — Stonewall starting center Jacob Stephens — and both of Ritchie’s completions came on the final drive, including his 16-yard touchdown pass to Erik Barnes that was tipped by a Central defender at the goal line.

“When they run that option we’ve got to make sure they can’t establish the fullback,” Mike Yew said. “I thought we did a pretty good job of that, and then the second part of it was the quarterback, and I thought we did a good job with that. Our game plan was to make them pitch it or throw it, and we thought if we got to that point we were OK.”

Stonewall, no doubt willing to do whatever it took to end a losing streak that started back in 2015, gambled early when it went for it on fourth-and-1 from its own 30-yard line on the game’s opening drive.

Falcons sophomore linebacker Isaiah Dyer knocked the ball loose from Lemon’s grip at the line of scrimmage — “I just kind of threw my shoulder in there to the ball and it just kind of popped out,” Dyer said afterward — and Central recovered at the 32. The Falcons were in the end zone nine plays later when Chris Conner ran it in from 3 yards out.

Central’s defense, which also scored a touchdown on Landon Shockey’s 6-yard fumble return in the second quarter, helped its offense with short fields all night. The Falcons’ worst starting field position of the game was their own 35, and four of their nine possessions began inside the Generals’ 40.

Stonewall’s best starting field position, meanwhile, was its own 27, and the Generals didn’t cross the 50-yard line until their final drive.

“It was really a chance for us to come out here and prove our talent and show what we can do,” Dyer said.

“It’s a rivalry, we’ve got to do what we can do. Kelan came out and had an awesome game. Our running backs came in, hit the holes. The offensive line came out, did their job. We won on the defensive side.”

Central scored touchdowns on seven of its first eight drives (the Falcons ran out the clock on their ninth possession), the lone exception coming on the Falcons’ second possession of the game when Hoover’s pass from the Stonewall 13 was tipped and intercepted by Justus Proctor.

The loss was certainly a disappointing one for the Generals, who felt they could be more competitive against their county rival this season and expected a better offensive showing in what is the third season running head coach Pete Lampman’s triple-option.

“Back to the drawing board, keep learning. I just don’t know,” Lampman, whose team scored just 69 points in 11 games last season, replied when asked what he makes of Stonewall’s continued struggles to run the option effectively. “Quite honestly I’m at a loss right now. I have to go look at the film and see what we did. I mean, I know what it was, more or less — reads. In the past they just physically pounded us. This year that was not the case. I mean they’re good, obviously. We’ve just got to play better. I don’t know. I don’t know where we go.”