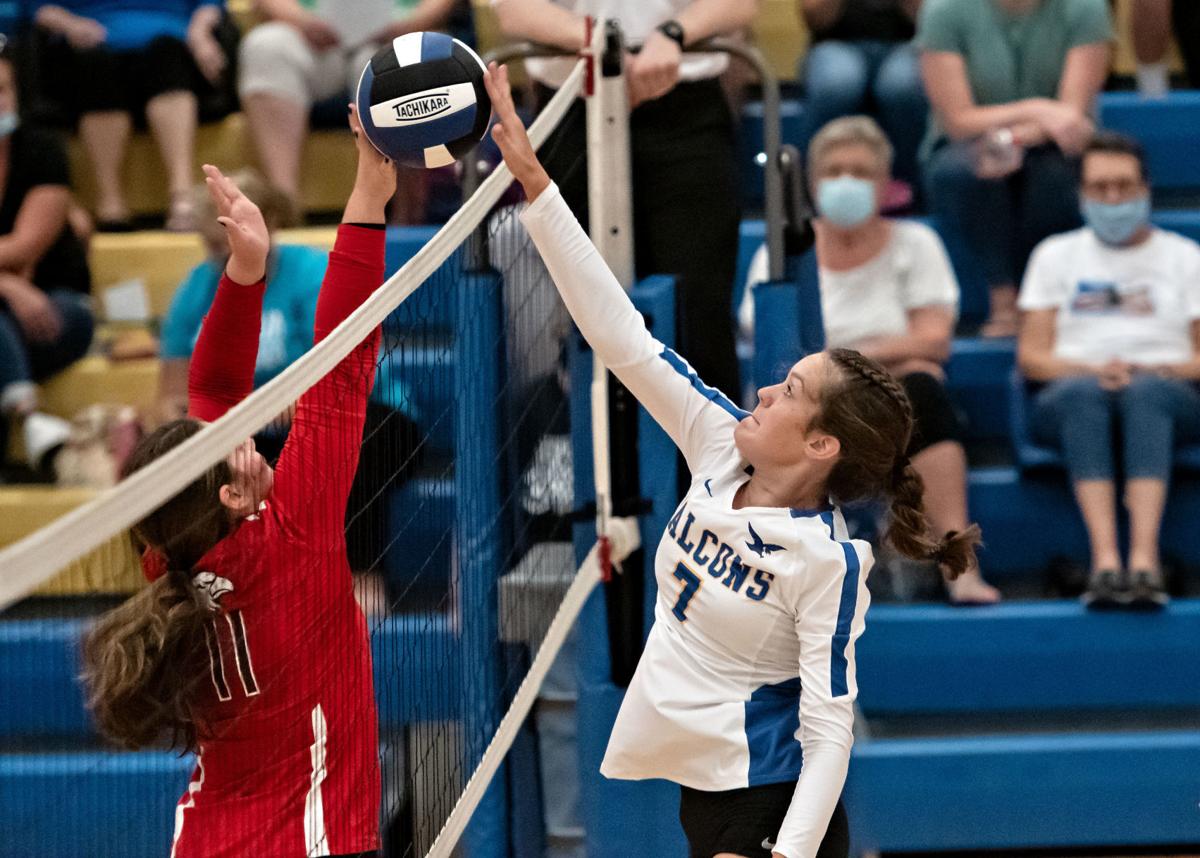 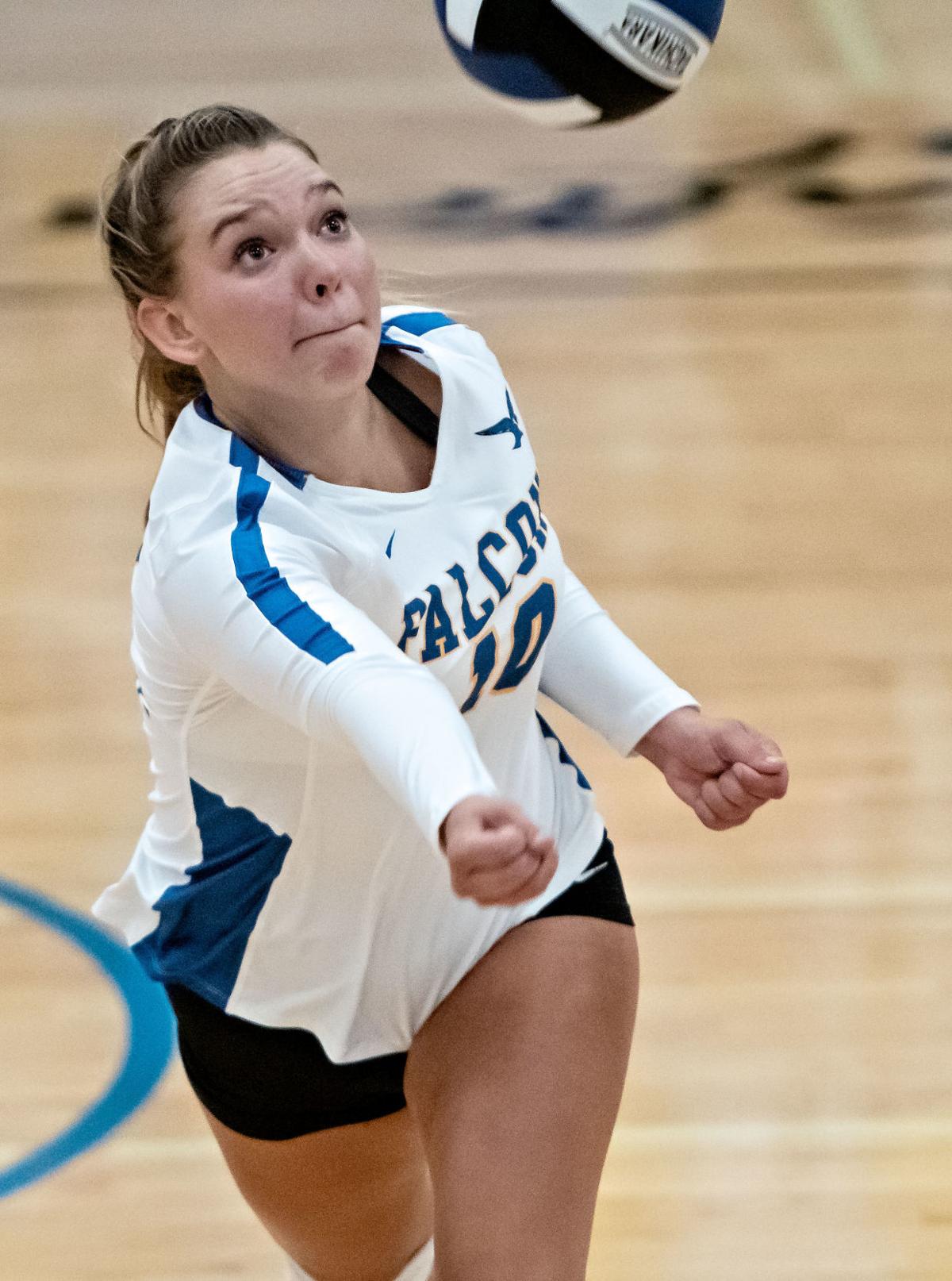 Central’s Erika Hutton attempts a hit after chasing down the ball.

Central’s Bailey Spiggle hits the floor as she connects on a dig. 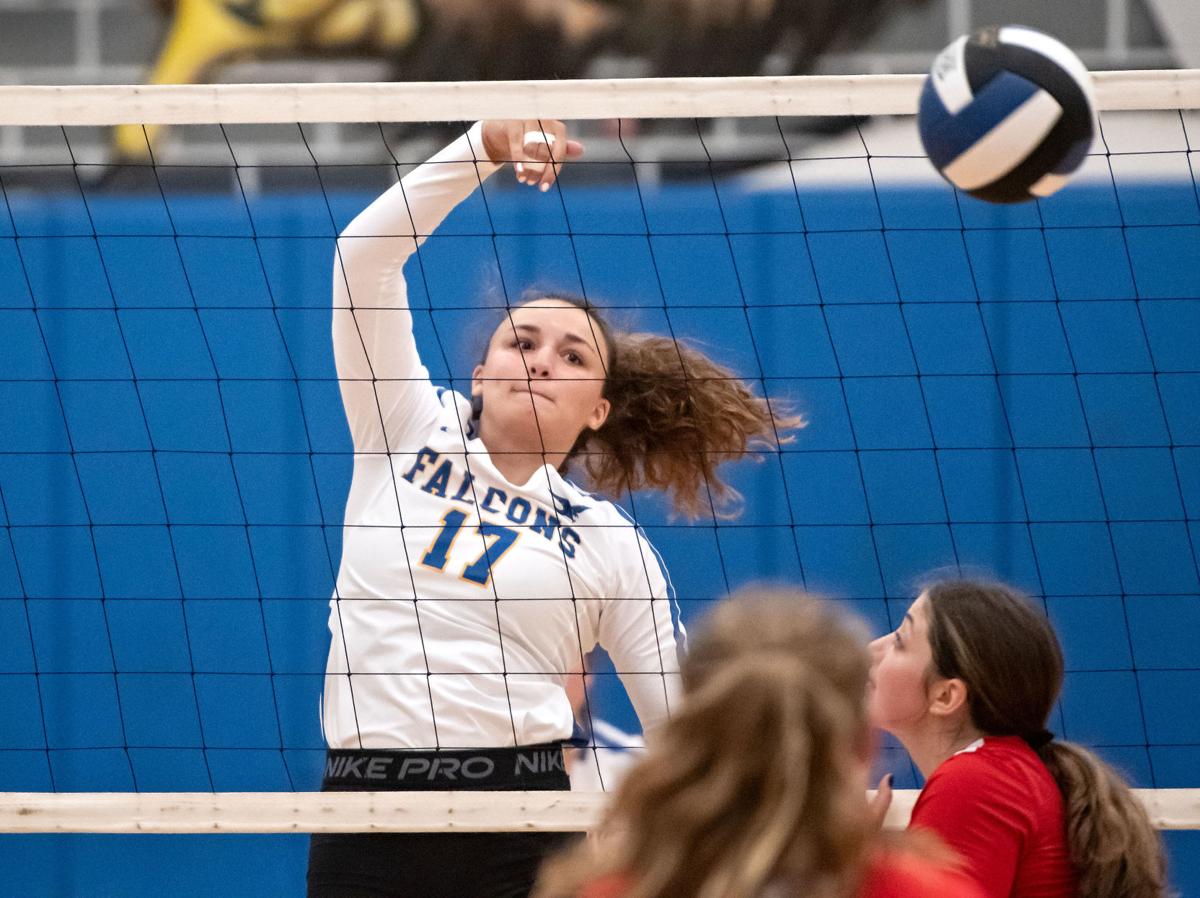 Central’s Ella Toothman goes up for a kill. 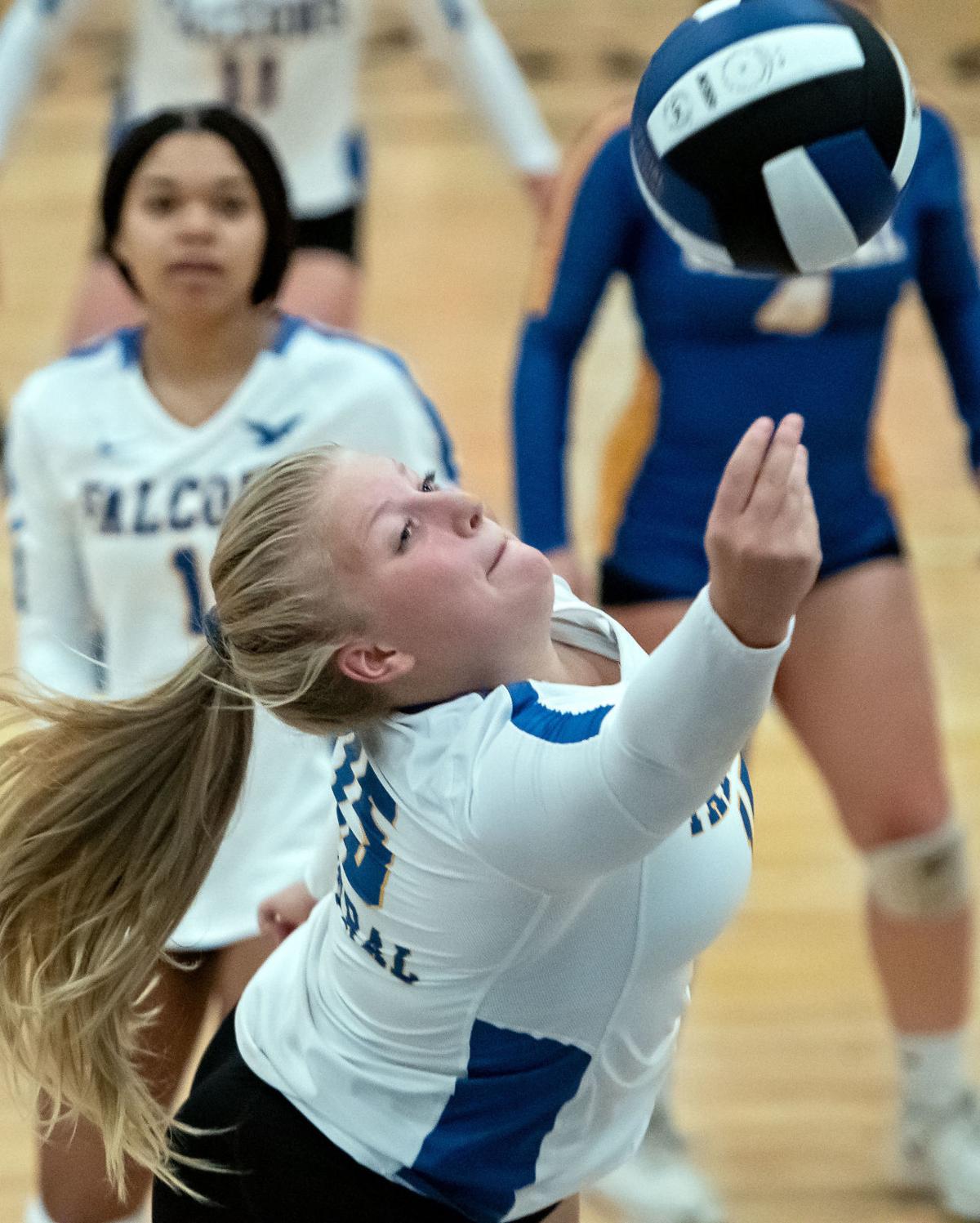 Central’s Emily Funkhouser reaches back for a save. 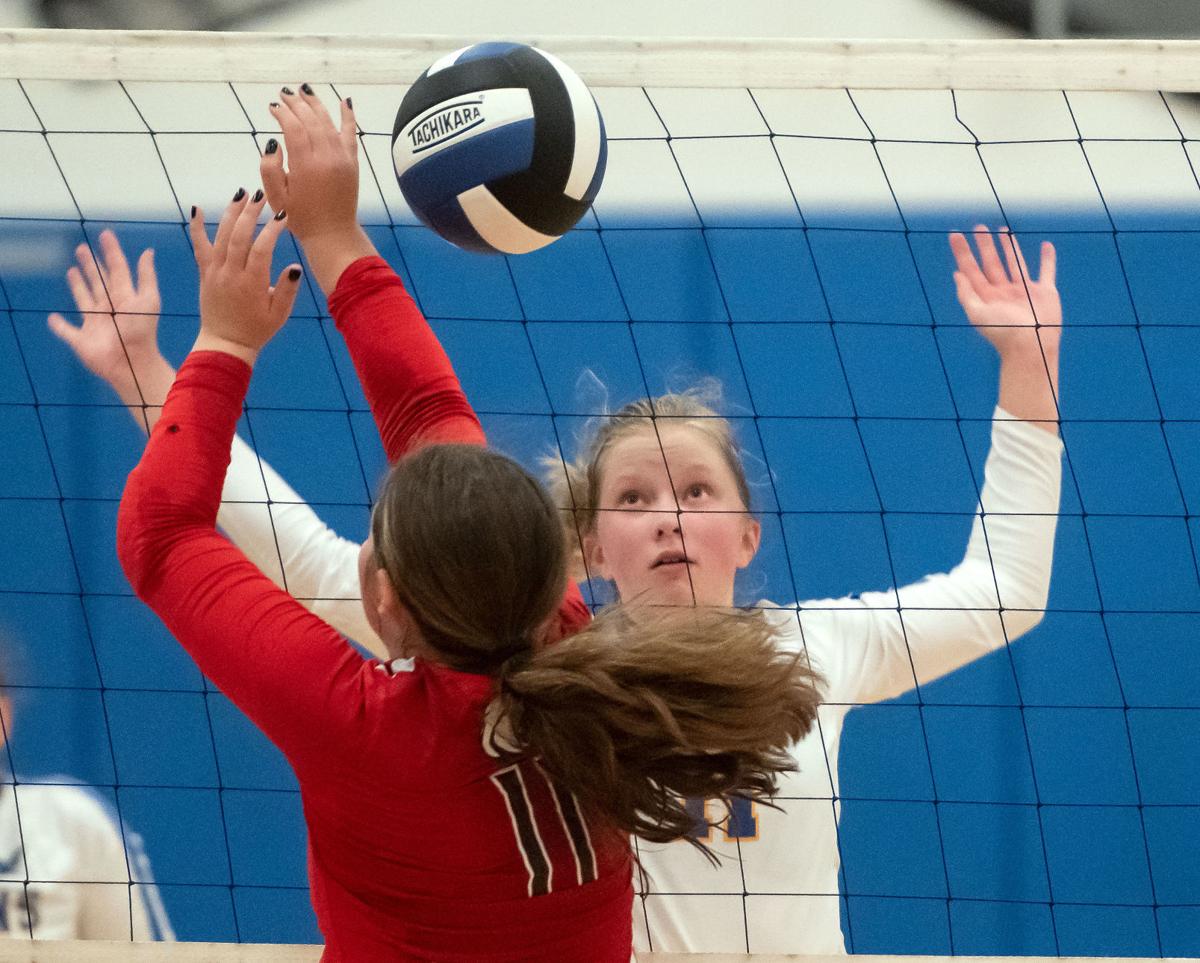 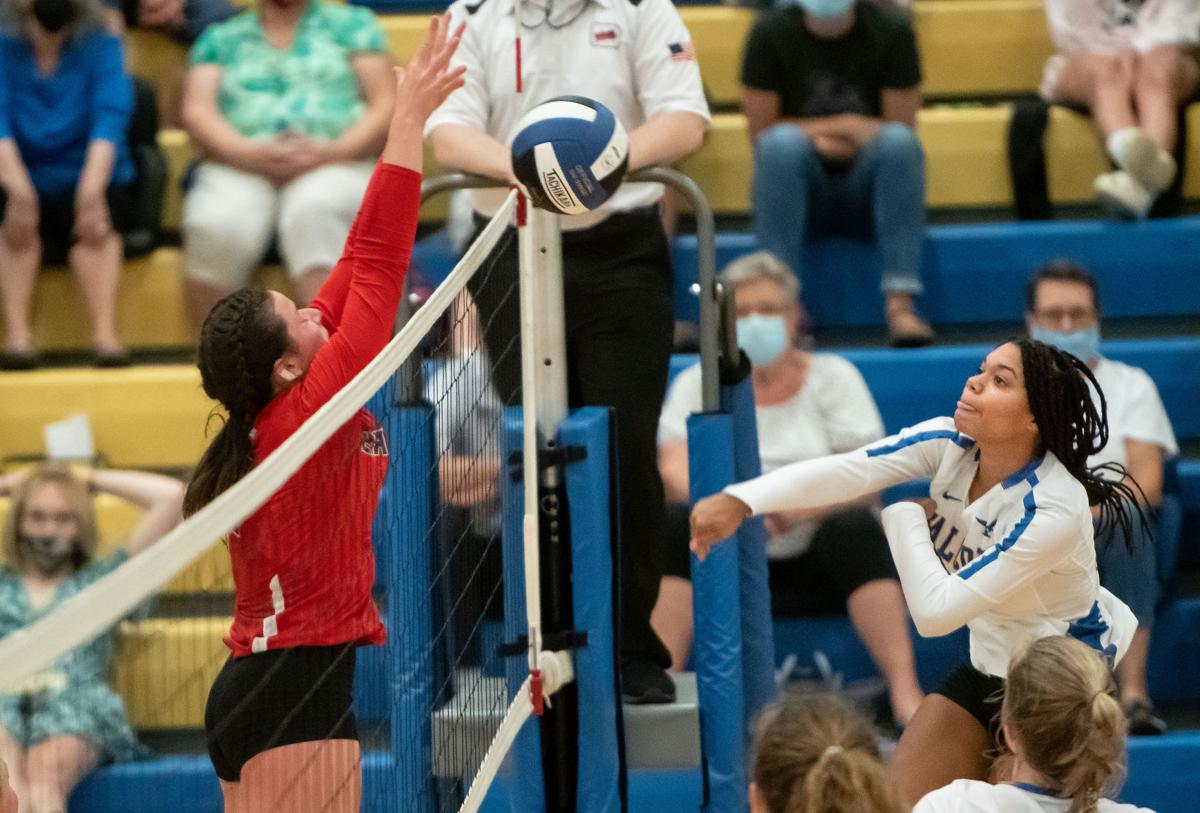 Central’s Nevaeh Strother goes up for a kill as East Rock’s Margo Fox leaps for the block.

Central’s Erika Hutton attempts a hit after chasing down the ball.

Central’s Bailey Spiggle hits the floor as she connects on a dig.

Central’s Ella Toothman goes up for a kill.

Central’s Emily Funkhouser reaches back for a save.

Central’s Nevaeh Strother goes up for a kill as East Rock’s Margo Fox leaps for the block.

WOODSTOCK — A clash between Bull Run District volleyball frontrunners on Monday night left Central looking up at East Rockingham in the league standings.

The Falcons, unbeaten entering Monday’s home match, suffered their first loss of the season as East Rockingham rallied for a 3-1 (17-25, 25-21, 25-20, 25-19) win on the road to seize sole possession of first place in the early stages of the district race.

Central (5-1, 3-1 Bull Run) looked strong early and used a 12-1 run midway through the first set to ultimately lift itself to a 1-0 match lead, but East Rock responded with three straight victories — including a late rally in the fourth and final set — to pick up a key road win.

“In that first set we were kind of doing everything right,” Falcons third-year coach Ashlie Clar said. “We were being very aggressive on offense and then after that our serve receive went downhill pretty fast. I don’t know how many times I said it but I said if we can’t serve receive we can’t do anything else. We can’t give free balls to a good team like that or they’re gonna put the ball away, and that’s what they did.”

It was the fifth straight win for the Eagles (6-4, 4-0), the last four coming against district competition.

“I don’t even know that there’s really words for it, how big this match was for us,” East Rock first-year coach Jonathan Williams said. “To get the win here, I mean it doesn’t solidify anything but it gives us a good step ahead in this district because that team (Central) and there’s like one or two other top teams in this district that are gonna be kind of feisty, us included. To get this win was huge. And make no mistake, Central is a legit team. They’re really good.”

A 1-0 deficit after a rally in the opening set fell short didn’t faze the Eagles, who led wire-to-wire in the second set to even the match and take back the momentum.

The Falcons, who trailed by as many as six points in the second set, made a game of it by twice cutting East Rock’s lead to two late. Trailing 20-15, Central used two kills by sophomore Peyton DiNardo — who led the Falcons with 14 kills in the loss — and an ace from Viliane Luyando Disdier to pull within 20-18. When down 23-18 a few points later, Central got consecutive kills from senior Bailey Spiggle, DiNardo and senior Ella Toothman to again pull within two points before the Eagles, coming out of a timeout, closed out the second set with a kill from Alliyah McNair and a Central attack error.

Central led by three points early in the third set but, like in the previous game, attempted to rally from down six points late in the set and couldn’t complete the comeback.

With East Rockingham up 21-15, the Falcons used a 4-0 run to pull within two points. Both teams traded points to make it 22-20 before Eagles sophomore Kate Simpkins closed out the win with a kill and back-to-back aces, the second of which handcuffed a Central back-row defender to give East Rock a 2-1 match lead.

“I told them we want to get up in the beginning and stay up, we don’t want to let them back in there because it’s so tough to finish out a hard set like that, going back and forth,” Clar said. “We couldn’t close it out. We couldn’t put pass, set, hit, all three together, and that’s what killed us.”

Central, trying to force a decisive fifth game, held a 16-10 lead in the fourth set but lost its offensive rhythm from there and failed to record another kill. After Keeyarra Dodson-Perez’s block on a free ball gave the Falcons an 18-15 lead, East Rockingham closed out the set with a match-clinching 10-1 run.

McNair, a freshman, had four kills and a block during the Eagles’ final scoring binge.

“It showed me they have the confidence to rely on each other,” Williams said of East Rock’s rally in the fourth set. “Volleyball being a team sport, no one player out there is gonna do anything and no one player is gonna lose the match either, so they know that they can rely on each other to get them through and pick each other up. Alliyah got real hot and there was no reason we should set anybody else besides Alliyah and Margo (Fox) in that set, and part of that is what we train in practice. … We train (setter Madelyn Williams) just to set the outside, set the right side, to spread that offense, and it works. It tires out the middles on the opposite team and then we open up the holes and just let them go to town.”

Simpkins led East Rock with 13 kills, while McNair and Fox each had 10 kills and Williams had 36 assists.

The Falcons returned to action at Clarke County on Tuesday to continue a week that features three district matches.

“We’ve got to let this one go, learn from our mistakes and what we did and move on from here,” Clar said of Monday’s loss. “There’s nothing we can do about it now. I always say volleyball players have to have a short memory. We always have to think, ‘next point, next point,’ or we’re gonna just keep going downhill.”