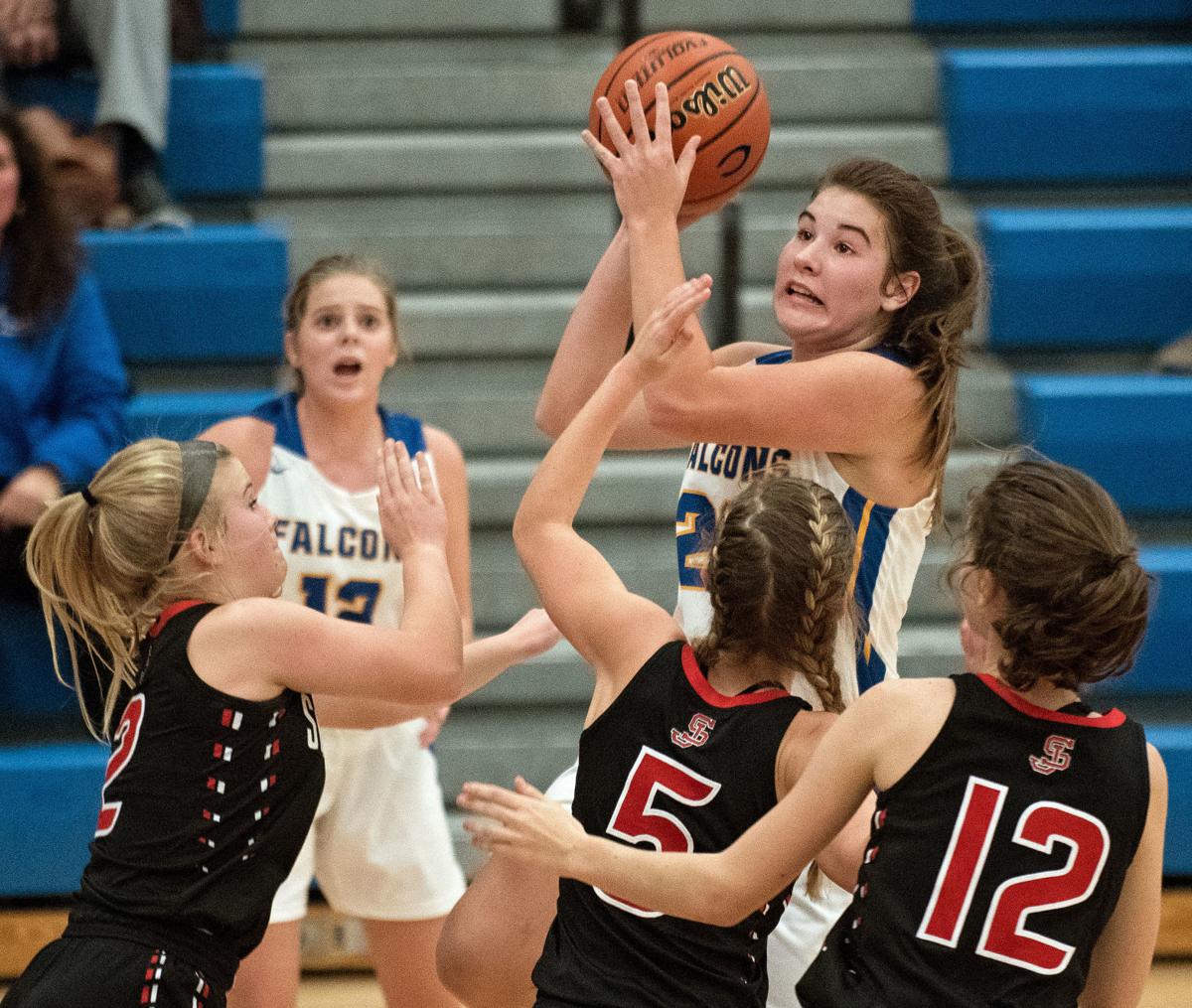 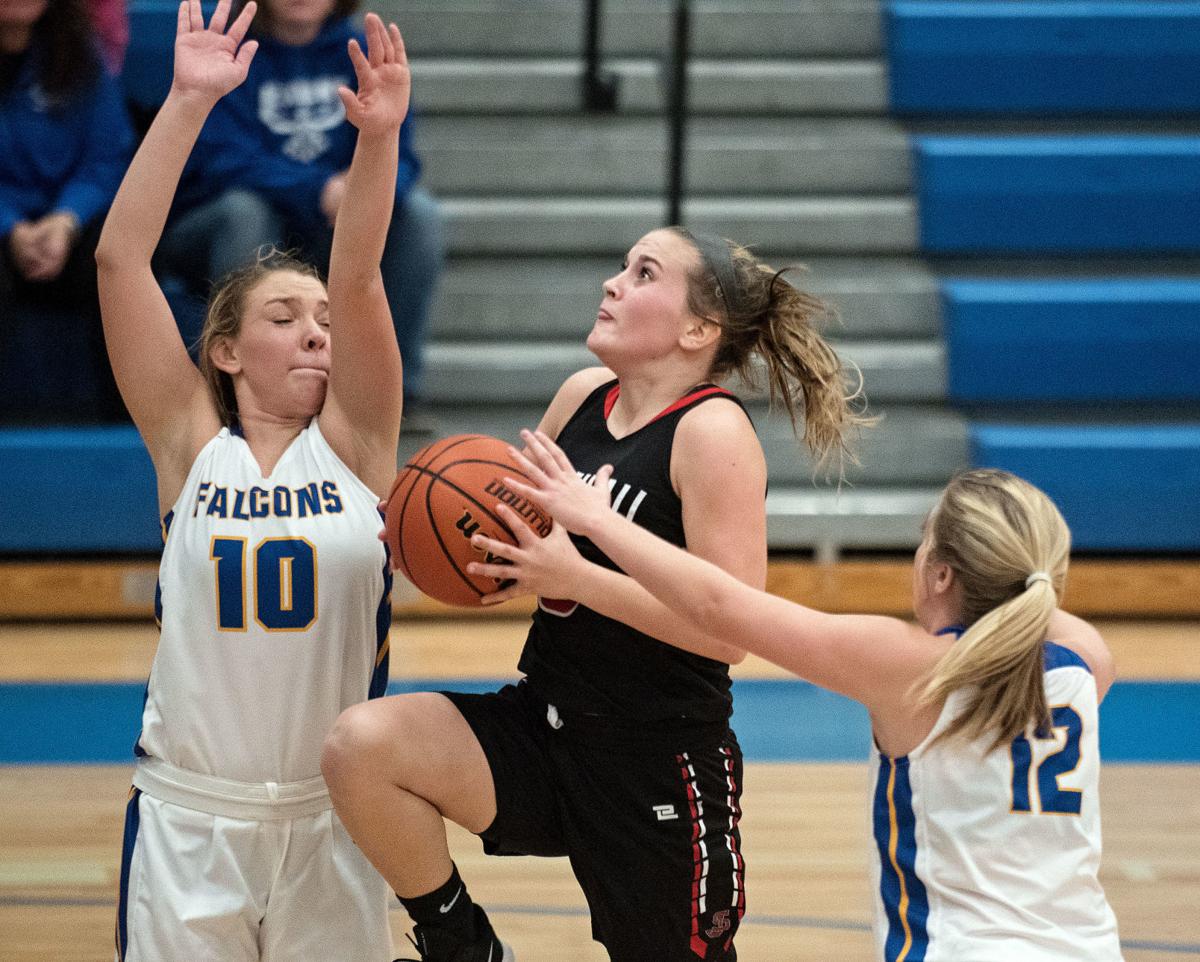 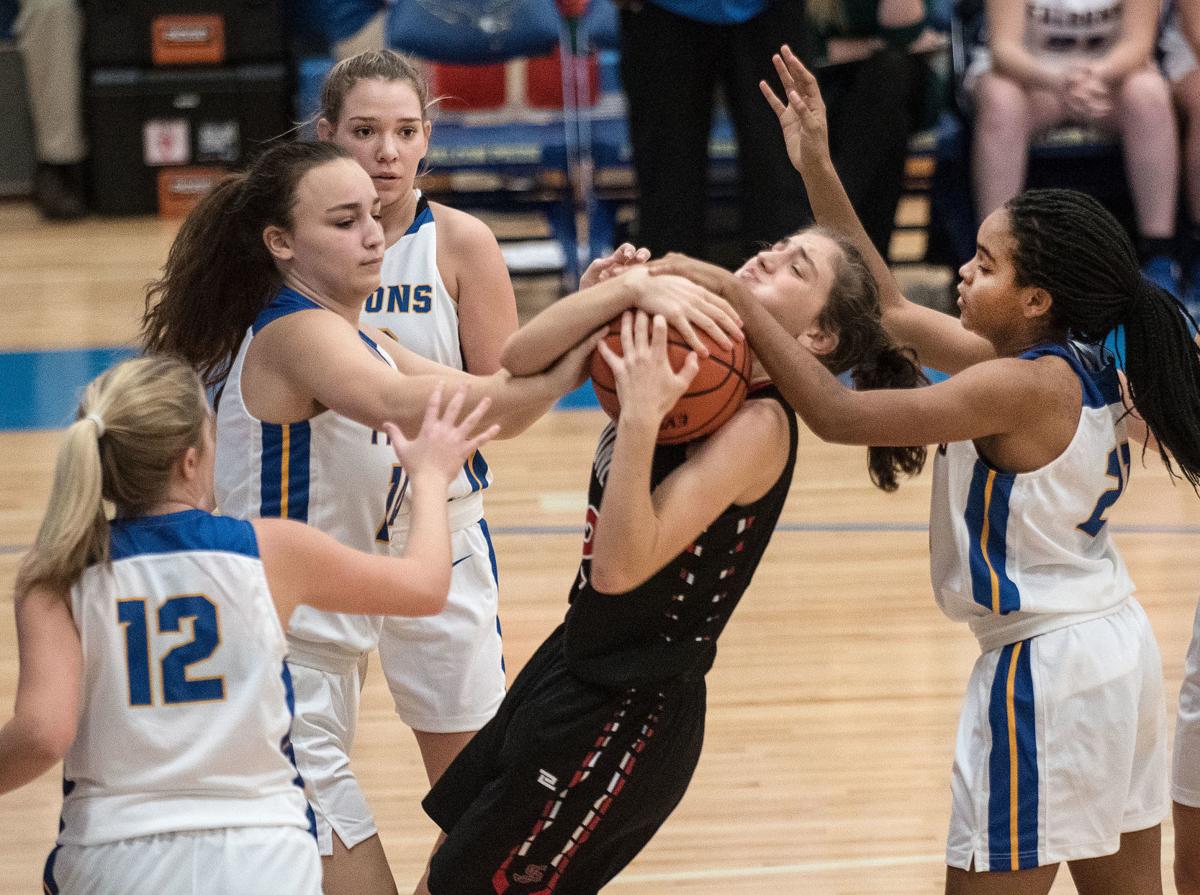 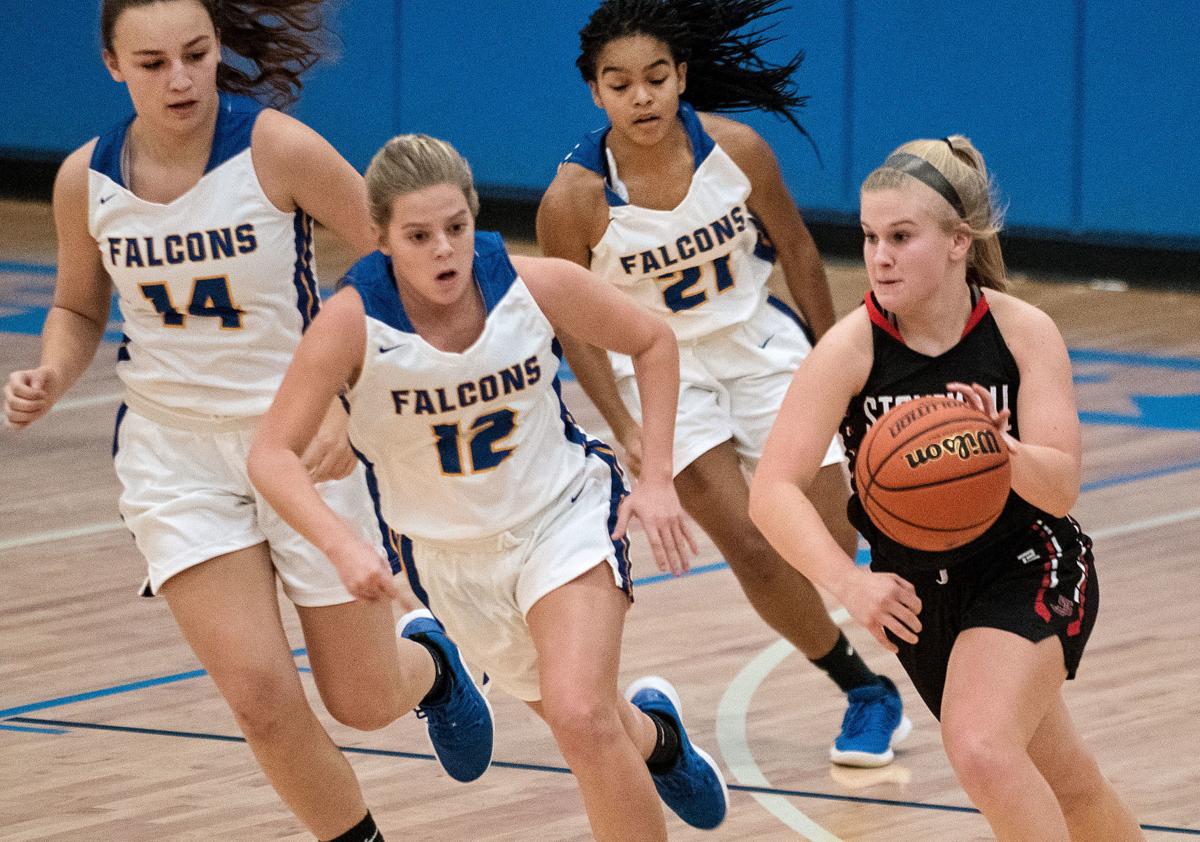 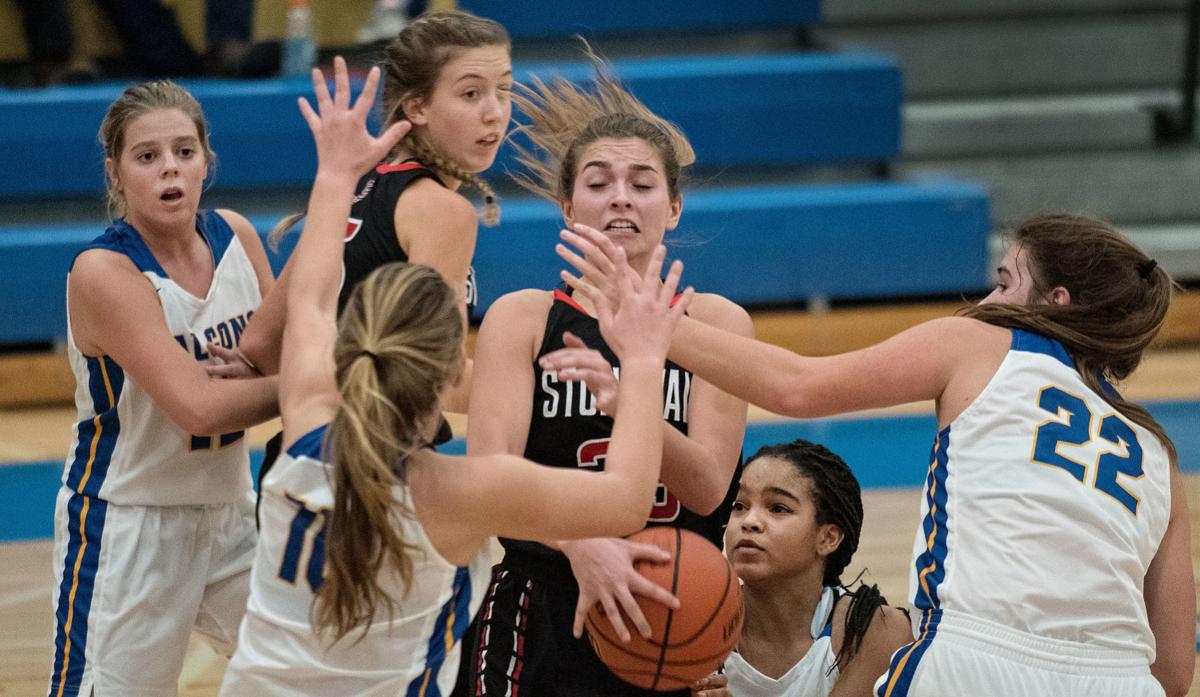 Stonewall’s Morgan Gibson looses the ball as she is surrounded by Central defenders during girls basketball action Tuesday night in Woodstock. 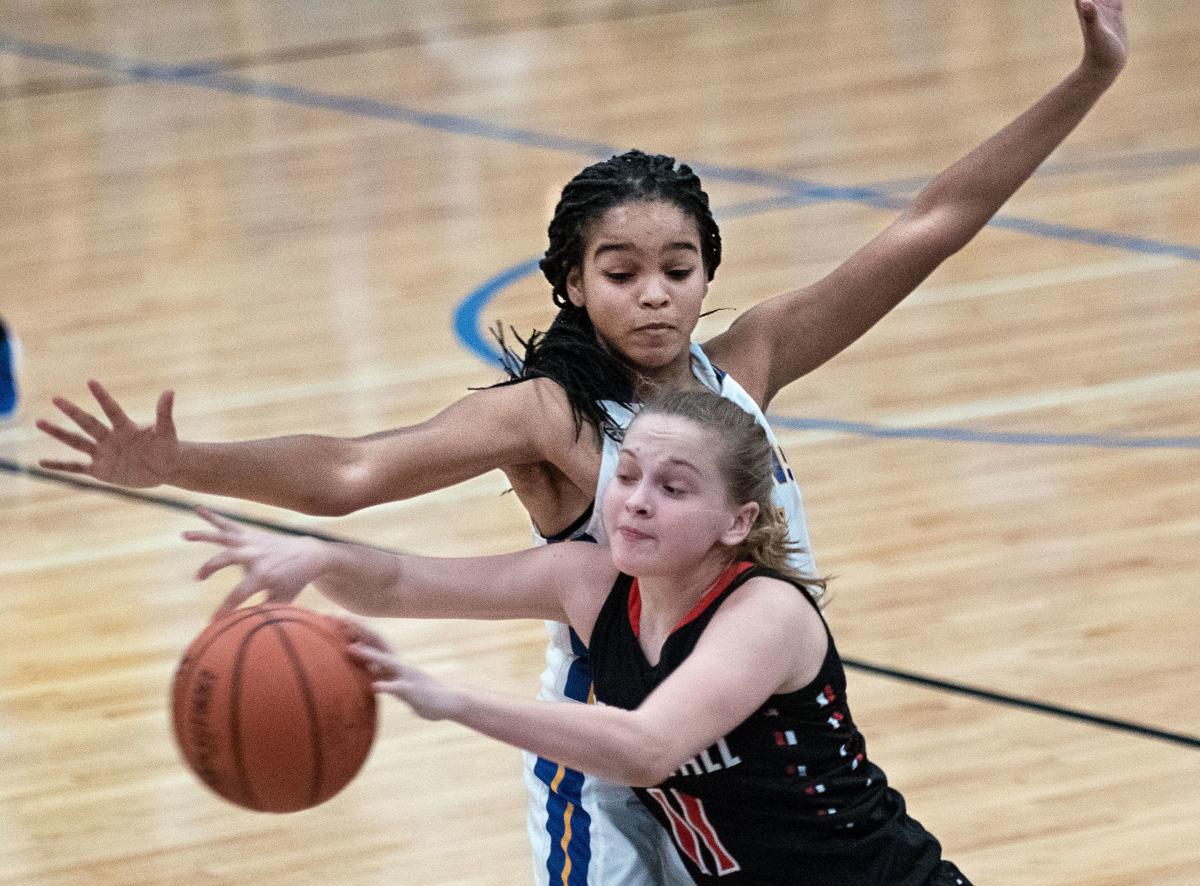 Stonewall’s Morgan Gibson looses the ball as she is surrounded by Central defenders during girls basketball action Tuesday night in Woodstock.

WOODSTOCK — Points have been hard to come by for Central’s girls basketball team this season, but the Falcons may have found a solution to their offensive struggles against Stonewall Jackson on Tuesday night.

There’s a popular school of thought in the basketball community that playing good defense often translates to success on the offensive end, and Central gave credibility to that line of thinking against the Generals.

The Falcons forced Stonewall into 32 turnovers in their second meeting of the season, and the end result was a 63-42 win over their county rivals that avenged a 10-point loss to the Generals just over a week ago and gave Central its first victory of the season. It was easily the best offensive outing of the season for the Falcons (1-4), who entered the contest averaging just 35.5 points per game.

“When you start playing good defense, it makes it fun,” said Falcons head coach Bryan Scott, a self-proclaimed defensive guy. “It seems like shots start falling when you’re playing good defense. Everything, the whole game just starts clicking, you have less turnovers, and just have fun. I think that’s where it starts, on defense.”

Full-court pressure was the key for the Falcons, who used a 1-2-1-1 zone to harass the Generals — a 1-4 squad with its own issues on offense — into 12 turnovers in the first period alone and 21 in the first half and left Stonewall head coach Jeff Burner admitting afterward that his team was outplayed and outcoached in every facet.

Central scored 19 of its 21 points in the first period on possessions following a Stonewall turnover and made its first six shots from the field en route to opening up a 17-3 lead five minutes into the game.

“The defense really gets us going,” said Falcons senior Maria Marston, who had three of the Falcons’ 12 steals. “After the defense we just get into game mode like that and offense takes care of itself.”

Seven of the Generals’ turnovers in the loss came before they could get the ball across the halfcourt line. At one point in the first period, Stonewall turned the ball over on seven straight possessions.

“We tweaked a couple things in the press,” said Scott, who praised the performance of his entire squad and noted the particularly strong defensive outings from senior Maya Frye-Williams, who held Stonewall leading scorer Kylene Franklin in check for most of the night, and senior guard Olivia Wightman. “I thought about backing out of it after they broke it pretty easily the first two times. I really thought about getting back out of it but then something just kept telling me no, stick with it, and it turned. We started to get some turnovers and that was big.”

Marston and Frye-Williams played monumental roles in pulling the Falcons out of their early season funk and combined to outscore the Generals by themselves.

Marston, the team’s leading scorer from a year ago, had 22 points and nine rebounds in the win, and Frye-Williams ended the night with a game-high 24 points and a handful of assists.

Frye-Williams, who attacked the basket early and hit some jumpers later on in the game, was efficient from the floor and made her first nine shots before finishing 10-for-13 from the field.

Central ended the night shooting 46 percent from the floor, though that number was 59 percent through three periods before the Falcons emptied their bench in the fourth. The Falcons had already set a new season-high for points scored at the end of the third quarter.

“It felt amazing. I’m proud of what we did as a team tonight,” Frye-Williams said of the offensive outburst. “We definitely showed out.”

Stonewall, which started two freshmen on Tuesday, continues to suffer from its own bouts with inconsistency on offense. The 32 turnovers against Central were bad enough, but the Generals compounded the issue by shooting just 27 percent from the field while making 14 of 28 free throws.

Freshman Mya Councill, who finished with 16 points, was the only double-digit scorer for the Generals, who have scored fewer than 10 points in 10 of 20 quarters played this season.

“But the other thing is we’ve got to become a better defensive team than we are right now,” added Burner, whose team has allowed Central’s two highest-scoring outings this season. “We gave up way too many points tonight. We just have got to be better. We’ve got to be more physical. We’ve got to be a tougher team. It’s what it is.”