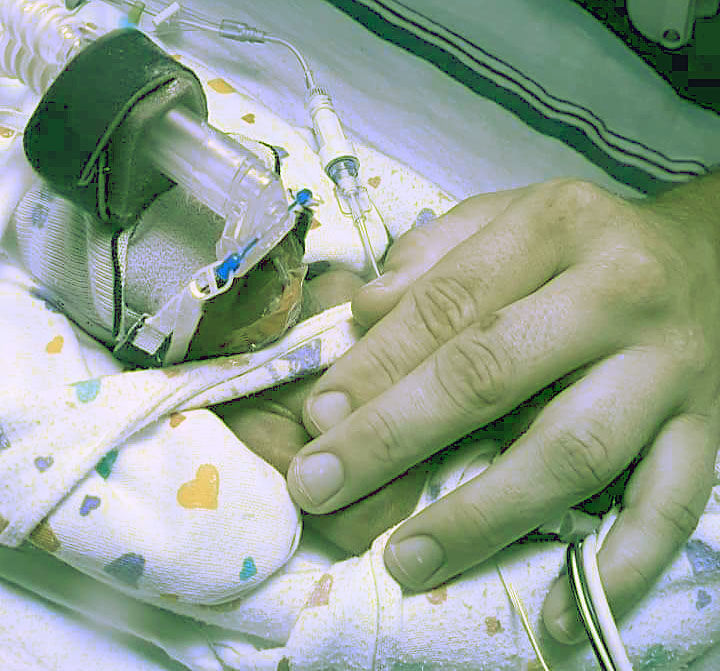 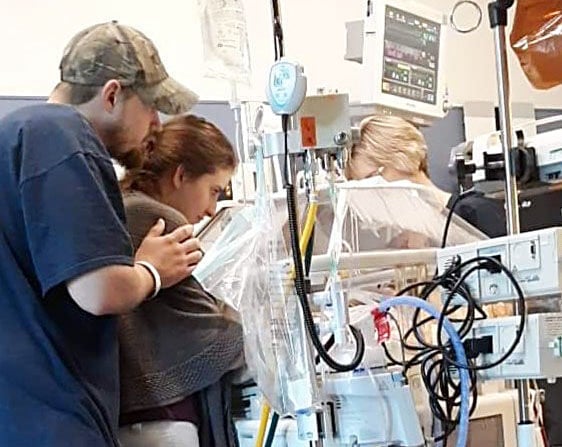 Ortiz, 18,  gave birth on Sept. 13 to a girl, Annalyn Grace Orndorff, in the parking lot of the 7-Eleven convenience store and gas station on Old Valley Pike. Orndorff, 28, was with her.

Ortiz, who was released from the hospital after a couple of days, said Annalyn is feisty and doing well.

The baby is breathing on her own but is on a machine to help, the family said.

Ortiz had been experiencing pain and cramping all day. Orndorff convinced her to go to the hospital. As they were driving to Winchester Medical Center, Ortiz asked Orndorff to stop at the 7-Eleven so she could use the bathroom.

Ortiz went into the store. Ortiz said when she got back inside the Jeep Liberty she felt a gush and intense pain. She was able to slip out of her pants in time to see Annalyn being born.

“The baby landed in my hands,” Ortiz said.

Ortiz did not know she was pregnant. The petite Ortiz had a tiny bump and took several pregnancy tests. The tests were negative.

Ortiz said she could not comprehend what had just happened and asked herself ‘where did this baby come from'?

Bystanders were alerted by Kirsten’s scream and Logan’s shouts for help.

“These amazing, wonderful people rushed over and saved her life,” Ortiz said.

A few bystanders took the baby from Ortiz.

Annalyn was not breathing.

A woman and a man came up. The woman suctioned the baby’s airway. Those two bystanders got the baby breathing.

Crawford said the family knows the names of the bystanders but said they wanted to remain anonymous.

Strasburg Police Chief Wayne Sager, who responded to the scene, took off the shirt he was wearing for the baby to use until blankets were found by the store owner.

Ortiz said she was confused and scared. She did not get to see or hold her baby until later at the hospital.

She and Orndorff have been spending all their time at the newborn intensive care unit, or NICU, at Winchester Medical. Ortiz has not had a chance to talk to the bystanders.

“I want to thank them for saving my little girl’s life. What do you say? I can’t thank them enough,” Ortiz said.

Doctors estimate the baby was born at 29 weeks. She weighed just under 1 pound 10 ounces, Ortiz said.

Annalyn lost a couple ounces in the first couple days, which doctors told the family is not unusual, but she is now at 1 pound 11 ounces, the family said.

Doctors told the family the baby could remain in the hospital through November.

The family will be ready when she comes home.

“My heart is filled. I still can’t believe she is here,” Ortiz said repeatedly using the word "amazing" to describe Annalyn being in their lives.

“She is so tiny. She snuggles up to your chest. It’s amazing. I keep saying to her ‘I love you’,” Ortiz said.

“That is what she is, amazing,” Crawford said.

“She is our baby but she is the community's baby as well. She is a little miracle baby in that there were people who were there who kept her with us,” Crawford said.