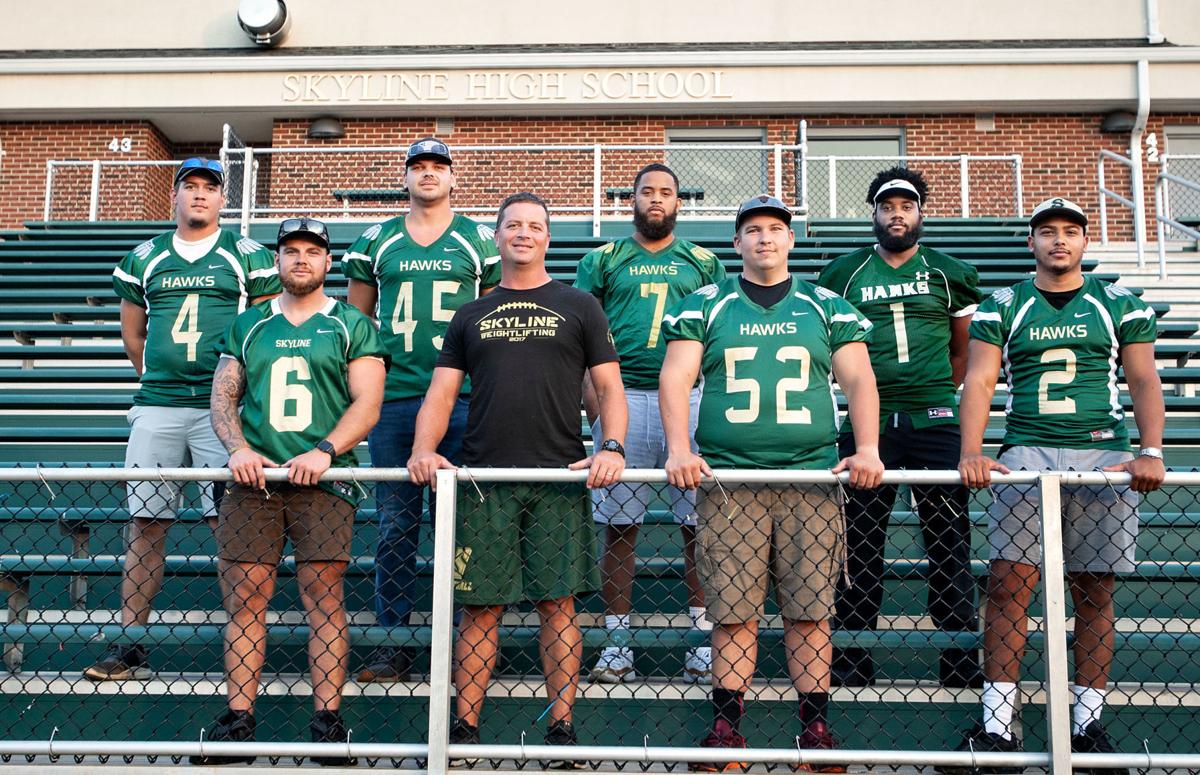 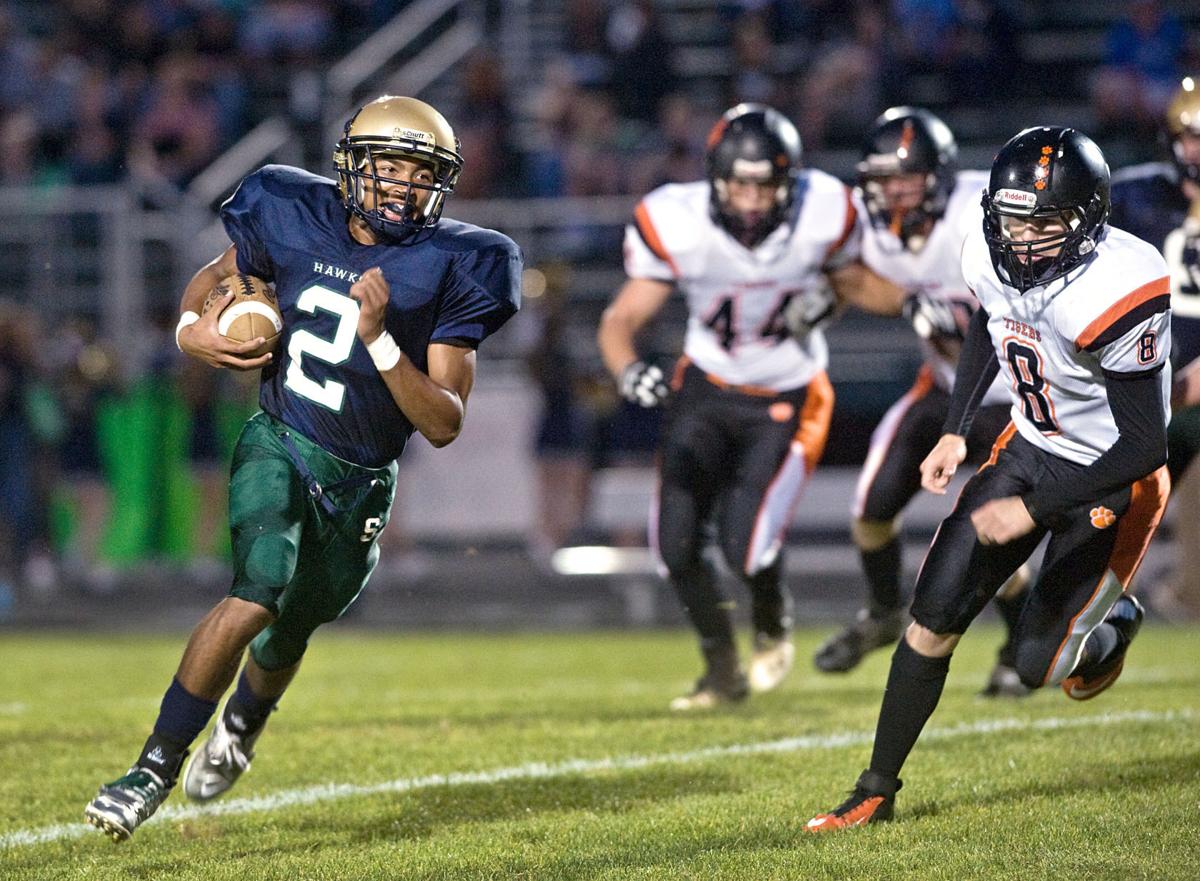 Skyline's Kylmen Breeden races to the outside as Brentsville's Seth Rollins, center, and Fuzz Loa, right, take chase during their September 2012 match. 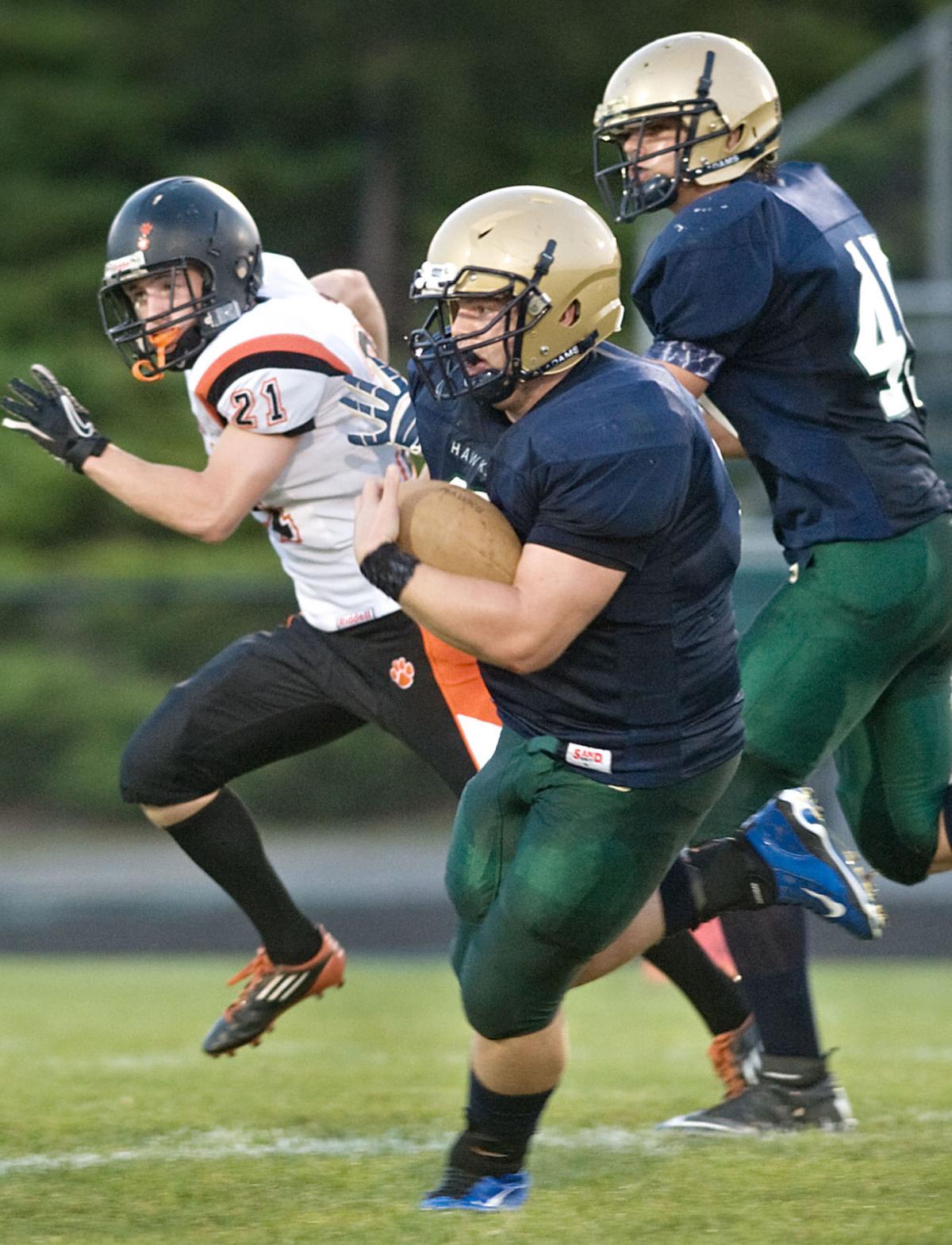 Skyline’s Chris Grady cuts across the field for a big gain as Brentsville’s Dylan Walls defends during their September 2012 match.

Skyline's Kylmen Breeden races to the outside as Brentsville's Seth Rollins, center, and Fuzz Loa, right, take chase during their September 2012 match.

Skyline’s Chris Grady cuts across the field for a big gain as Brentsville’s Dylan Walls defends during their September 2012 match.

FRONT ROYAL – Skyline head football coach Heath Gilbert, standing outside the school building atop a hill that overlooks the Hawks’ football field, recently recalled his mindset following the All-Northwestern District meeting at the conclusion of the 2011 regular season.

The Hawks hadn’t been world-beaters that season – they were 4-6 in 2011 – but they had won a share of the Northwestern District title for the first time in the program’s then very short history, losing only to Handley in four district games. Gilbert remembered being “so upset” by the results that had come out of that all-district meeting, ones that he felt hadn’t appropriately recognized the Hawks for the season they had just completed, that as he was leaving he thought, “Wait till next year. It’s gonna be on.”

“And it was,” Gilbert added nine years later.

Thus began Skyline’s transition from a so-so season to one that can quite fairly be considered the best in the football program’s 13-year history. The Hawks of 2012 more than doubled their win total from the previous season – in fact, their 10 wins easily eclipsed their combined total (six) in 2010 and 2011 – and played like a team loaded with veteran players.

Nick Helmick, one of the 15 seniors on that 2012 squad, recalled that “we all had the same mindset” as Skyline prepared for the season. Marcus Turner remembered summer weightlifting that offseason drawing a level of commitment he’d never seen before as part of the program, and Gilbert, who awards black T-shirts to all of his players who attend every summer workout each season, noted that he gave out 50 such shirts that summer, an enormous number for a program that has struggled at times to consistently get its players into the weight room.

The Hawks, who were returning most of their starters from the 2011 season, probably knew good things were in store in 2012 if they put in the work. Many of the upperclassmen also were motivated by the prospect of extending their playing careers beyond high school.

“Everybody had intentions of going to play after high school,” said Chris Grady, one of around 10 Hawks from the 2012 team who went on to play football in college at various levels, “so we all just kind of held each other to that.”

Kylmen Breeden said the Hawks could tell as early as 7-on-7 competition that summer that something good was brewing. By the time Skyline began its official preseason practice, the offense – which for the first time was going all-in on the read-option game that would serve the Hawks so well in 2012 – was humming.

“Going into two-a-days, our whole offense could score,” said Breeden, one of a slew of weapons at the disposal of dual-threat quarterback Aaron Jeremiah that included fellow receivers Turner and Hunter Stewart, Helmick at tight end and backfield mates Grady and Dayvon Haight. “We had our line, they were solid, and all of them could move. The offense we were running, we knew we could spread them out. And then with Aaron and the read-option just coming out, he was magical.”

Skyline’s 2012 season began with a bang as the Hawks’ showcased their big-play ability from the opening kickoff – quite literally. In the season opener at home against Mussleman (West Virginia), Haight housed the opening kick to start things rolling in appropriate fashion.

The Hawks would go on to down Mussleman, 41-28, in a game that several Skyline players said years later they weren’t “supposed” to win. It was the first of four straight victories as the Hawks romped through the first quarter of their schedule.

As Skyline expected, the offense was soaring.

“Everybody knew how to do anything,” said Jeremiah, noting that Breeden served as the team’s “Wildhawk” quarterback and then-sophomore Jerrius Baltimore made valuable contributions at QB. “It worked no matter what we did.”

The Hawks had a serviceable passing game with Breeden and Helmick serving as Jeremiah’s primary targets, but Skyline’s forte was an explosive running game built around the deceptiveness of the read-option.

As is the case with such an offense, the success began with Jeremiah’s ability to make the appropriate reads with the ball in his hands, and Breeden recalled several instances during the 2012 season in which the referees blew a play dead because they incorrectly identified the ball carrier.

“Aaron probably had the best reading ability for a high school quarterback that I’ve seen,” said Zach Blair, Skyline’s standout linebacker who was named the Daily’s Defensive Player of the Year that season.

Skyline’s wealth of weapons made its offense even more dangerous. Haight, who finished just shy of 1,000 yards in the regular season, and Breeden each averaged over 11 yards per carry in 2012, and Jeremiah, Baltimore and Grady each finished with at least 250 yards rushing. In 10 regular season games, the Hawks averaged nearly 260 yards rushing per contest, and at the end of their 12-game season – which included two Group AA, Division 3 playoff games – they were scoring 32.7 points per contest.

Breeden credited the blocking for allowing Skyline’s playmakers to do what they did best, and Jeremiah said the Hawks’ offensive line – which included Chase Clatterbuck, Ronnie Clifton, Anthony Meador, Travis Siever and Brendan O’Conner – was an intelligent group that could adjust blocking assignments on the fly. A lot of times, Jeremiah noted, the linemen needed to know who not to block in order for a play to work.

“Everybody knew what was going on,” Siever said. “I remember at times throughout the season the coaches (had) two plays and were like, ‘Alright, pick one. Get to the line and you guys make the call at the line and run it.’”

“That was probably the first year playing with coach Gilbert where you could tell (the coaches) trusted us a lot too,” Grady added. “He would literally ask us, ‘What do you want to do here?’”

To add onto the high football IQ, the Hawks also had confidence.

Those types of things happened regularly on defense, too. Turner, a defensive-back-turned-linebacker, recalled a couple times during 2012 when he called an interception return for a touchdown moments before it happened, including one such instance against Brentsville.

“They only ran like two or three formations,” Turner said. “We were all back there in the huddle and I was like, ‘Pick-six coming up.’ Zach hit somebody and the ball kind of tipped off their fingers, I caught it and ran it back.”

Many of the same names that excelled on offense were mainstays on the defense. Helmick, Siever, Grady, O’Connor and Jonathan Kisner led the charge up front, Blair, Gerren Butler, Chaz Rutherford and Turner roamed the middle of the defense at linebacker and Haight, Breeden, Jeremiah, Stewart and Marquise Lewis resided in the secondary.

Though the Hawks gave up some points – their quick-hitting offense didn’t do the defense many favors – they forced 20 turnovers in the regular season. Blair, who would be named the Region II Defensive Player of the Year, was the biggest disrupter of the bunch and finished the regular season with 131 tackles, 13 tackles for loss, four interceptions, seven forced fumbles and two fumble recoveries.

“I would probably just credit a lot to Steve Burton,” Blair, who is playing professional football in Finland, said of Skyline’s assistant coach. “I think coming into it, he knew he had a lot of two-way players. … But it was like with how fast our offense scored, it was like we were able to manage games where we didn’t give up a lot of big plays and we forced a crap-ton of turnovers that year too. Overall, I think it was just a matter of getting off the field because our offense didn’t care about time of possession.”

Blair recalls the Millbrook game – during which the Hawks built a commanding lead and nearly squandered it in the fourth quarter after Jeremiah was ejected for throwing a punch – standing out in that it was the first contest after Skyline’s first loss of the season to Kettle Run and proved that the Hawks could bounce back after getting knocked down.

But it was another Northwestern District win – against Sherando on the road on Oct. 26 – that the Hawks unanimously agreed sits atop the highlight reel of the 2012 season. That game, a 28-21 win, gave Skyline the outright district title for the first and only time in program history.

It was a dramatic contest that went down to the wire. Despite losing Breeden to an injury in the game, Skyline peppered the Warriors with big plays and ended the night with over 430 yards of offense, nearly 380 of that coming on the ground. Jeremiah kicked off the scoring with a 40-yard TD run, Haight torched Sherando with a 93-yard scoring run and Baltimore, orchestrating Skyline’s “Horseman” package, was a dynamic changeup at QB in the second half.

As good as Skyline was that night, Sherando nearly matched the Hawks point for point. Only when Jeremiah tackled Josh Ojo inbounds on a second-down screen pass from the Skyline 8 as the final seconds ticked away did the Hawks seal the deal. Sherando, trailing by a touchdown, rushed to the line to get a final play off but wasn’t able to beat the whistle.

“After every game we said, ‘Check. Check. Check,’ until we beat Sherando,” Helmick recalled. “In the last seconds when Aaron tackled him (inbounds), they weren’t able to get the last play off and we all ran down the field screaming, ‘Checkmate.’ And everyone was jumping and hugging and everything else. That was probably one of the best memories of football that I think I have.”

It capped a district slate that included victories over James Wood, Millbrook and Handley. Blair said the feat showed the “heart of Front Royal.”

“I think it’s one of the first times in the county history they beat all the Winchester teams in the same season,” Helmick said.

Following the Sherando win, Skyline picked up other notable victories against cross-town rival Warren County (in a nailbiter) and Loudoun Valley (in a blowout) in the regular-season finale and the first round of the Region II, Division 3 playoffs, respectively. The latter was the program’s first postseason win.

The Hawks’ season ended in the second round of the playoffs with a second loss to Kettle Run, which ended up reaching the state semifinals that fall for the second season in a row. The Cougars were the only team to beat Skyline in 2012.

Yes, Skyline was talented that fall. But a couple of Hawks also noted that no one on the team cared who was seizing control of the spotlight. They all wanted to make big plays, and they were more than willing to share the opportunities to do that and trusted each other to get the job done.

“They were all-in together and that was special,” Gilbert said. “And you can see their bond, how that translated on the field and through our play. Being all-in together is so important.”

That season, it led to a 10-2 season, the program’s first and only outright district title and its first-ever playoff victory.

“They put us on the map in a lot of different ways,” Gilbert said.