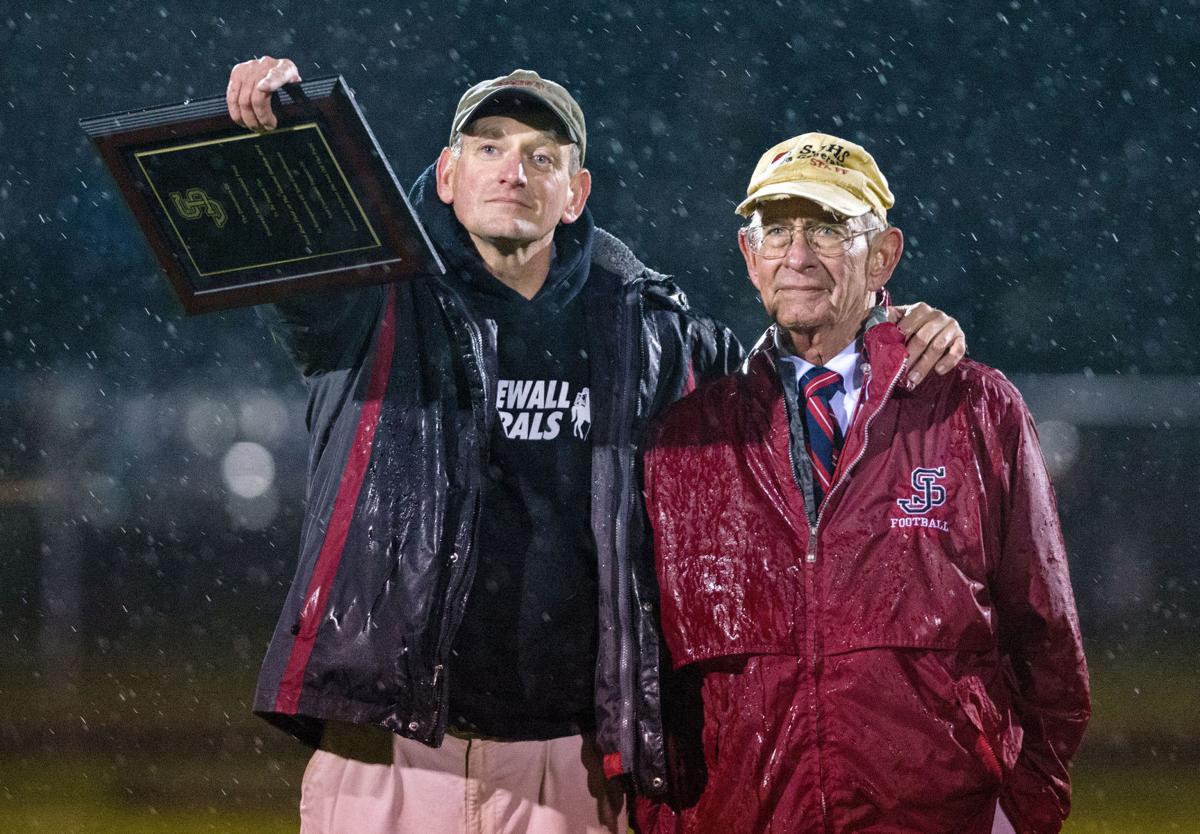 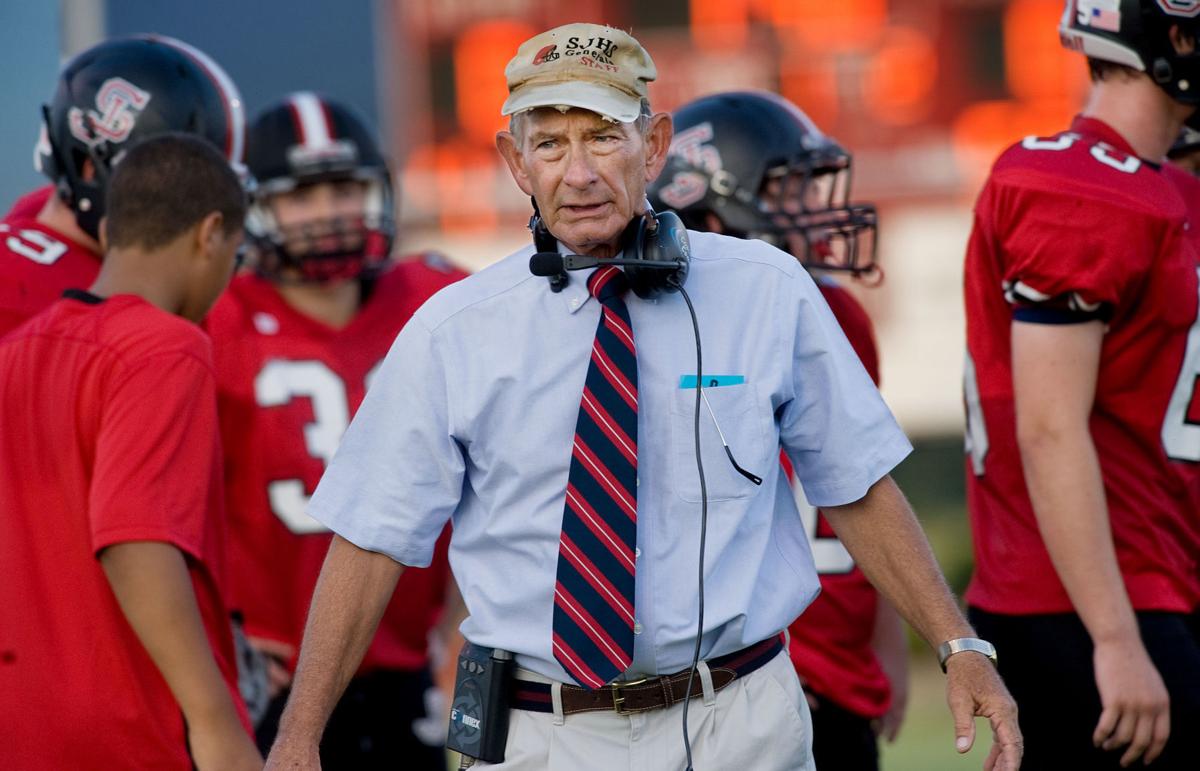 Stonewall Coach Dick Krol walks back to the sideline after a timeout during the game on Sept. 5, 2014 against Central High School. Rich Cooley/Daily

Stonewall Coach Dick Krol walks back to the sideline after a timeout during the game on Sept. 5, 2014 against Central High School. Rich Cooley/Daily

Editor’s note: The following story ran in The Northern Virginia Daily on Nov. 29, 1996.

Dick Krol is forever adjusting his Stonewall Jackson ballcap. He’s had the one he wears now for only a year or two, but already it has split wide open at the seam around the edge of the bill because of the constant fiddling. The hat has frayed beyond repair and it’s time for a new one.

Krol’s career pursuits have been that way. When the situation has worn thin, he’s found something new and better.

Krol came out of Robert E. Lee High School in Staunton in the early ‘60s, straight into the University of Virginia’s engineering program. He played on the freshman football team. The next season he practiced every weekday and stood on the sideline every Saturday. Those things he did well. The classroom, though, was his weak spot. He flunked out and found a job.

Then he was drafted into the Army and made a map maker.

“People laugh when I tell them that,” he said. “But it was important because a lot of maps we had were out of date and useless.”

Krol never laughed about his job because it meant he didn’t have to go into the combat in during the war in Vietnam. If fighting got anywhere near where he and his map-making crew were, they were evacuated.

“They wouldn’t let us carry weapons,” he said. “We carried a T-square.”

Krol completed his 730 days of required service and came home to Virginia. Being away had given him time to think about what he would like to do for the next 50 years.

“The only thing I think of that I enjoyed without reservation was my career as an athlete,” he said.

So Krol, who was by then older than most college students, went to Bridgewater College to play football as a 175-pound tackle for coach John Spencer. He also knew he wanted to coach, so he became a teacher.

“John Spencer was extremely good to me,” Krol said. “He gave me a lot of opportunities that others wouldn’t.”

Krol had moved on well from his days at U.Va. Degree in hand, he looked for his first teaching and coaching job. He found it in a little place called Clifton Forge in 1971. It was the perfect place for him. He loved football and the town was rabid about it.

Krol spent seven years there, the last two as head coach, and he has never seen anything since like the rivalry between Clifton Forge and Covington. Covington loved its football team as much as Clifton Forge loved its team, and every year they played proudly for the Little Brown Jug.

Then the winning tradition was closed down. Consolidation came to Alleghany County and that meant a bigger school. Instead of getting only a new hat, Krol got a new job as well. I’ve always liked the small-school atmosphere,” he said.

Krol ended up on the Northern Neck at Lancaster High School where the football was weak, but the Chesapeake Bay fishing was strong. It took a few years, but Krol was able to build enough discipline into the program to make it a winner. In his eighth and last year,” the Red Devils finished 9-1 and lost to Surry County in the first round of the playoffs.

Then Krol began the process that led him to Stonewall Jackson.

Eleven years ago he took the head coaching job at Natural Bridge. A year later he became disillusioned and quit coaching and teaching. He went right back to Lancaster County to paint and fish.

As the summer of ’87 wore on, Stonewall Jackson High School was looking for a new football coach. The principal, Bill Sprinkle, heard about Krol and called him. The fish weren’t biting much anymore, so Krol bit on Sprinkle’s offer and got a new hat to wear.

“The painting and fishing was nice,” he said. “But August was coming.”

Krol took the job not knowing anything about Stonewall’s history. The Generals had never had a winning season. His first game showed him why.

Stonewall was at Rockbridge County near his old stomping grounds of Clifton Forge. The Generals threw a 68-yard touchdown pass to take the lead late in the game. But Rockbridge came right back to score with 36 seconds left to break a 20-game losing streak.

Krol also didn’t know about what had happened the previous season. Kelly Dawson, the team’s quarterback, died one night from a ruptured spleen after a game.

“I’d heard about it, but I didn’t know it was this school,” Krol said.

Krol’s first senior class had been Dawson’s class. Many were reluctant to play that fall. Krol understood their reluctance, but he managed to get most of the players to play again. And many of the parents were apprehensive. They didn’t want something tragic happening to their son. Nothing close to the Dawson tragedy has happened since.

Only good things have happened to the Stonewall football program. The best thing is Saturday’s Division 1 state semifinal game against Surry County in Windsor.

Krol is at a small school he doesn’t want to leave. He’s been the right man for the job, leading the Generals to their only three winning seasons and only two playoff berths in the last four years. His record at Stonewall is 46-57, but he is 27-16 the last four years.

“People told me, “You can’t win here,” Krol said. “That bothered me. We may not become a Strasburg or a Notre Dame, but you can win here.”

Krol’s first job was to teach the Generals how to win. He was able to because he never accepted losing. Several times after games he felt the Generals should have won during his first few seasons, Krol told reporters, “No comment.”

“I’m not intense,” he said. “I think I’m sort of laid back and calm. I don’t know how I’m perceived. Just because I’m not a smiler doesn’t mean I’m sour. But a lot of people perceive a non-smiling face as an unhappy one.”

His players, he believes, see him differently. Spend some time in the locker room and you will see a coach who knows how to joke with his players after practices and games.

Eventually, just as Krol thought, the players began to believe they could win. Three years ago, they beat Strasburg to share their first district title. They believed they could win that game because the two previous seasons the Generals had lost close games to the Rams. And what happened in last week’s Region B championship shocked everyone but the Generals. The same team that had been manhandled 38-18 in the ninth game of the season came back to beat Strasburg 21-8.

“It’s not something you bash into them,” Krol said of winning.” It’s something that comes with time and sweat.”

From his first day on the job until now, Krol has wanted to be with his players. He becomes attached to every new group that comes along and wants to see them graduate. And by the time they do, he’s already hooked on the next group.

“I don’t know that I do anything for the kids,” he said. “But they’re doing a heck of a lot for me. I have no intentions of going anywhere else.”

Right now, Krol has no intentions of getting a new hat, either.

Whether Krol is wearing a new hat or his current one next year, he will be coaching football under it at Stonewall, not painting and fishing every day.

“I could see me on a river bank fishing,” he said. “But even fishing every day can get old. And that’s hard to say.”

What’s not hard to say is that Dick Krol loves being a football coach no matter what his hat looks like.