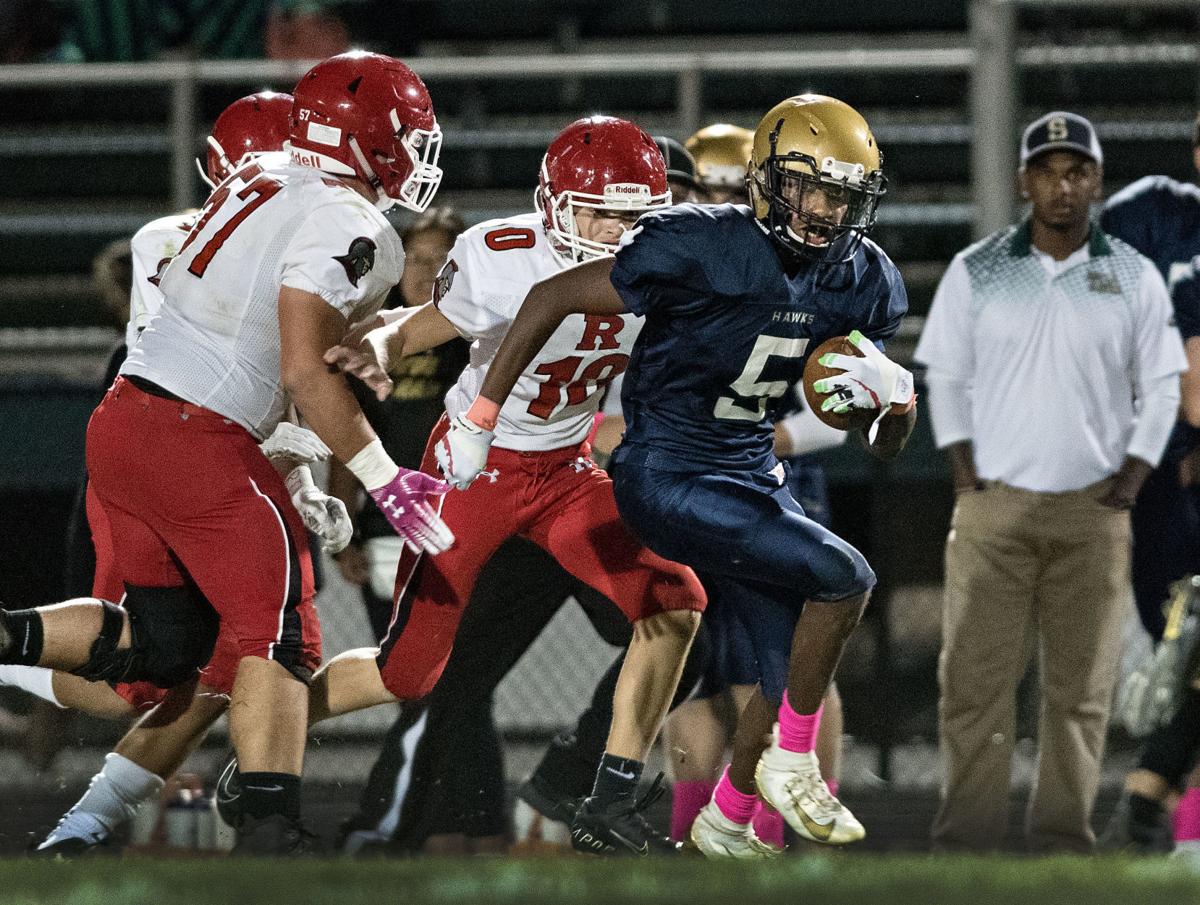 Skyline’s Marion Haley, right, is pursued by Riverhead’s Colin Armstrong, left, and Isaiah Dunlap, center, after receiving a pass during their Oct. 4 game in Front Royal. Haley set the school record for catches (70), receiving yards (1,149) and receiving touchdowns (18) this season. 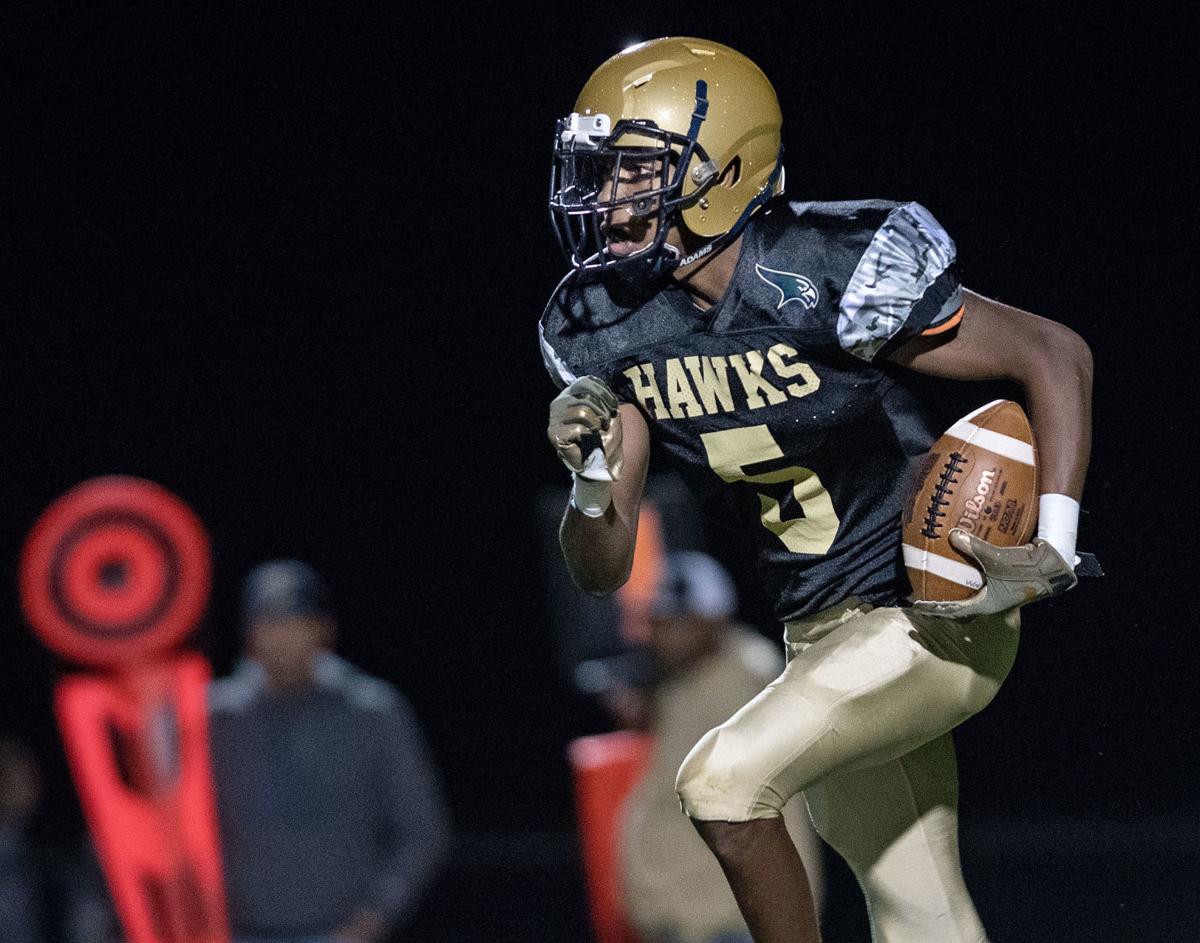 Skyline’s Marion Haley runs for yardage during their Oct. 18 game against William Monroe in Front Royal. Haley led the Hawks to a 6-6 record and the Region 3B semifinals.

Skyline’s Marion Haley, right, is pursued by Riverhead’s Colin Armstrong, left, and Isaiah Dunlap, center, after receiving a pass during their Oct. 4 game in Front Royal. Haley set the school record for catches (70), receiving yards (1,149) and receiving touchdowns (18) this season.

Skyline’s Marion Haley runs for yardage during their Oct. 18 game against William Monroe in Front Royal. Haley led the Hawks to a 6-6 record and the Region 3B semifinals.

Haley had two high school friends who passed away. One, he said, was one of his closest friends and one was someone he had classes with, and so he asked his mom if he could transfer to another school. They decided to transfer crosstown to Skyline and the move paid big dividends for the Hawks’ football team this season.

“I wanted to start a new life and see how it goes here,” Haley said of the move. “I’ve been having a great year. It’s fun. I enjoy it a lot.”

Haley, The Northern Virginia Daily’s 2019 Offensive Football Player of the Year, had a monster year and broke several school records. He finished the season with 70 receptions for 1,149 yards and 18 touchdowns.

Haley said he was surprised at how strong of a season he had.

“I was very surprised at first,” Haley said. “I could have done better. I feel like I could have caught all the passes that got thrown to me, blocked more and helped the team out more aggressively.”

“In practice, we were like ‘we’re either really bad or Budder’s really good,” Gilbert said. “We were seeing it right away. He’d catch the ball and then boom he was gone. He had that side-step move and he was zooming.”

Gilbert said that Haley is smart and was able to learn Skyline’s playbook quickly and even helped some of his teammates out by explaining some of the plays to them.

In the first two games of the season, wins over Independence and Broadway, Haley had 12 catches for 271 yards and six touchdowns. Gilbert said after that opposing teams realized they needed to put more focus on Haley. Gilbert said the Hawks had to start moving him around and make it tougher for teams to defend him.

“It was kind of like a chess match every week,” Gilbert said. “After the first couple games people realized ‘OK you better have a plan for Budder and if not he’s going to torch you.’”

Haley said that he had several memorable moments from the season. One of them was the win over William Monroe in the Region 3B playoffs, when the Hawks won 42-20 and avenged their regular-season loss to the Dragons.

He said his favorite catch of the season came against Handley. The Hawks were facing a fourth-and-long and went for it, and Haley made a diving catch on a ball thrown by Skyline sophomore quarterback Blake Appleton and made the first down.

“Blake overthrew me; I dove for it,” Haley said. “That hurt me a lot because it hurt my stomach and everything, but that was the hardest catch I ever caught during a game. I actually liked it and enjoyed it. It was very fun.”

He had 18 touchdown catches but Haley said his favorite one came against his former teammates at Warren County in a 39-8 win to end the regular season. He said he still stays in touch with some of the players, including Bryce Post, Kohl Baugher and Karenzo Hogue. Haley said it was fun playing against them.

One friend that Haley already had when he came to Skyline was Appleton. Haley said that he and Appleton have been best friends since third grade and have what they call that “B and B connection” on the field.

“We grew up with each other,” Haley said. “We fight a lot but it’s fine. It’s just love and friendship – that’s what friends do. This is my first year actually playing with him in high school ball and we had fun together. We have more goals to beat and records to beat together.”

Haley said that he got the nickname “Budder” from his mom when he was a baby.

“She said I looked like a butterball turkey,” Haley said. “That’s why she calls me Budder. It just stuck and then all my friends and family started calling me that.”

Haley said that his family has played a key role in his success in sports. His father Leroy played basketball at Warren County, and two older brothers who played sports at Warren County.

“We’re very competitive,” Haley said of his brothers. “We talk a lot of stuff and say who’s better. But I think I’m personally the best out of all of us. I look up big to them. They’re always there for me, and I like that. It’s just motivation for me and they push me a lot.”

Gilbert said that Haley has a great attitude and that he certainly can play in college. Gilbert said what level Haley plays at will depend on how hard he is willing to work on the field and off the field and academically.

The Hawks finished 6-6 this season and advanced to the Region 3B semifinals. Haley said for next year he just wants to break his own records and for the team to have even more success. He said he believes the team can go far if they work hard.

“We just need to play as a team and work harder, and just focus and listen to the coaches more,” he said.