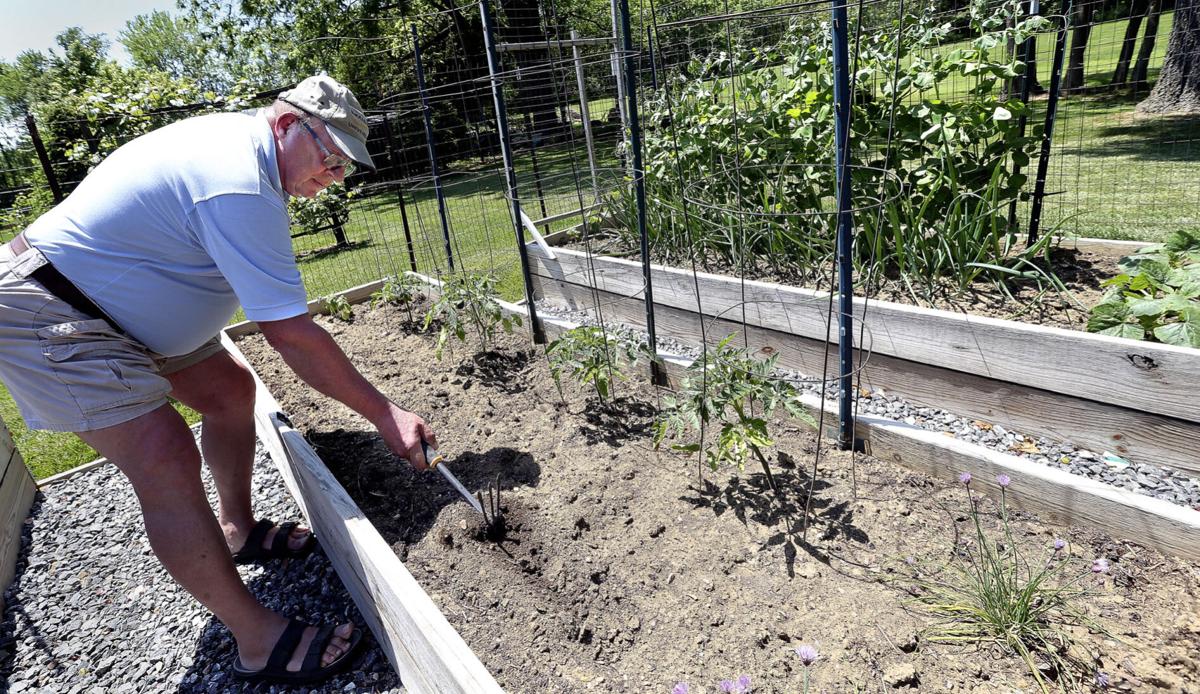 Frederick resident Rich Sankovich is shown making a line in one of his nine raised bed gardens for his granddaughter, Lana, 5, to plant carrots in. 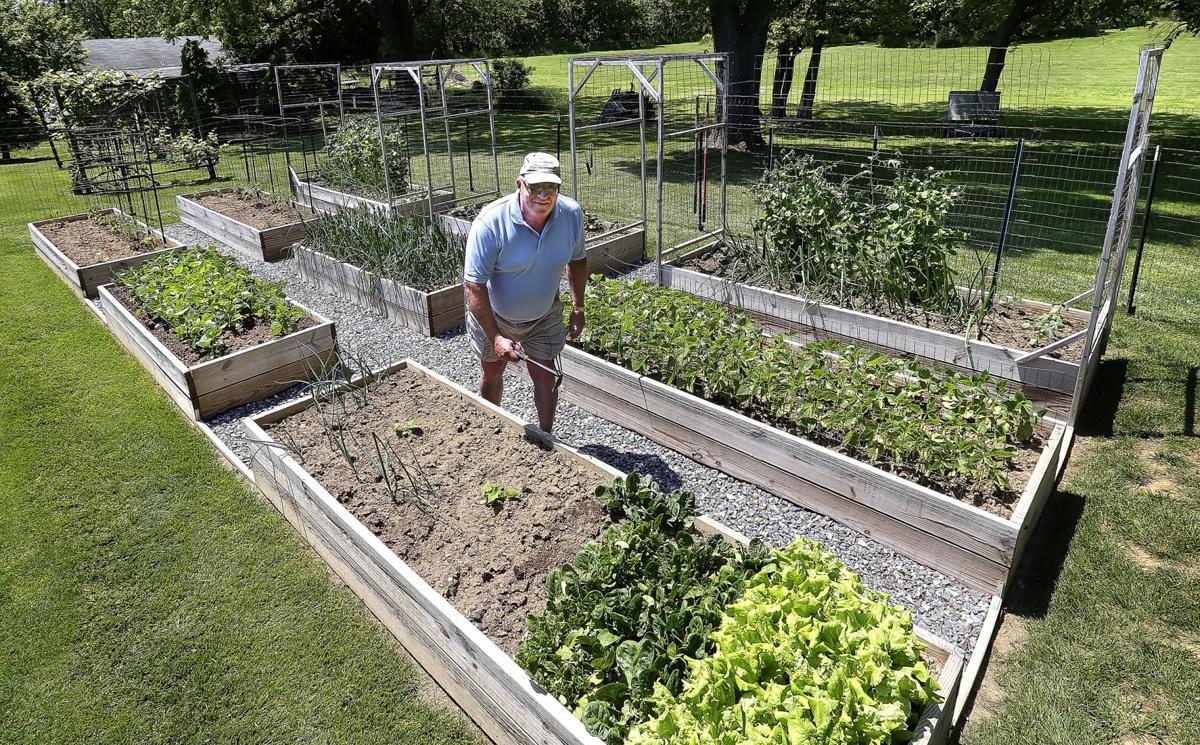 Frederick County resident Rich Sankovich works in the nine raised beds in his back yard. 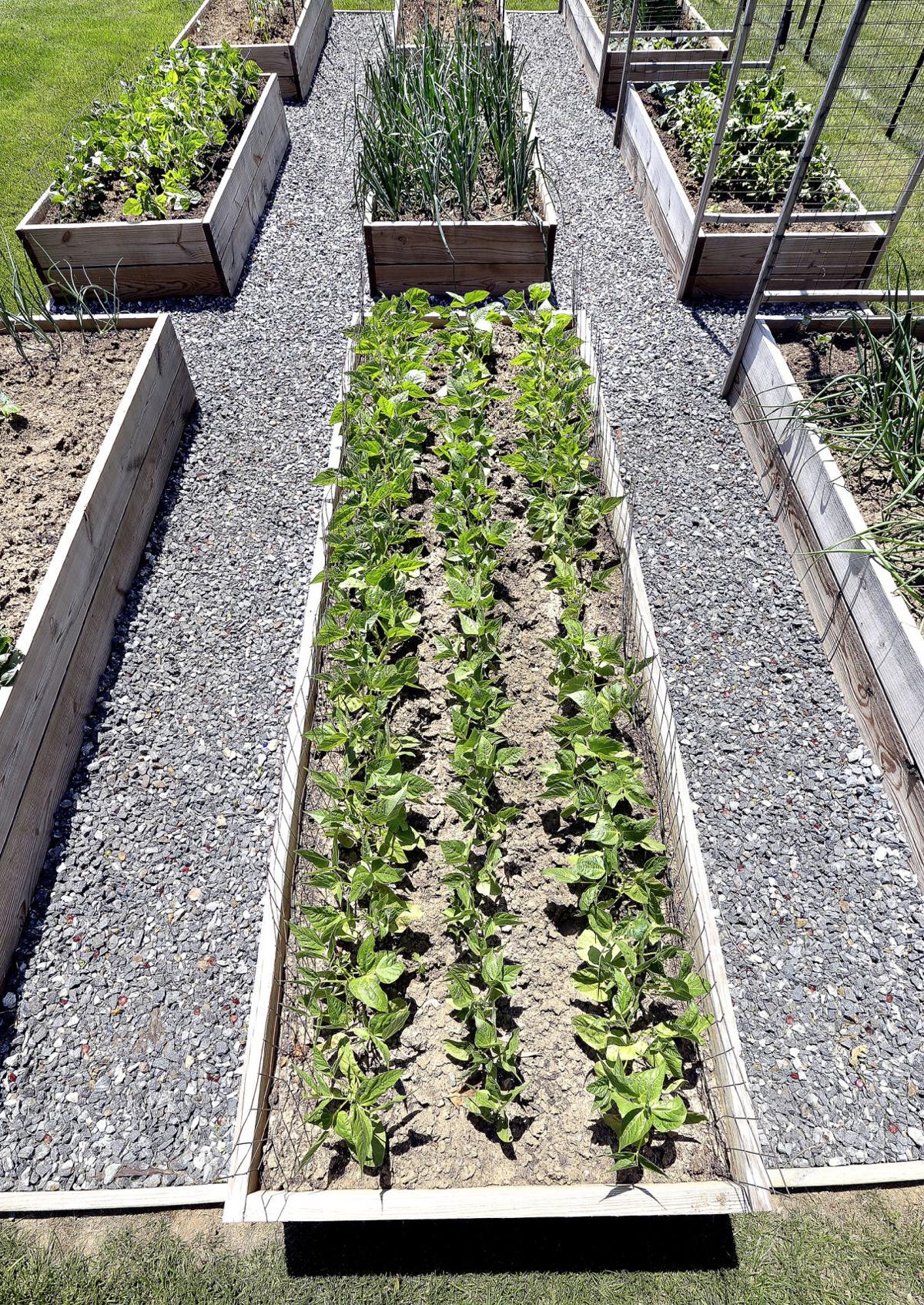 Frederick resident Rich Sankovich is shown making a line in one of his nine raised bed gardens for his granddaughter, Lana, 5, to plant carrots in.

Frederick County resident Rich Sankovich works in the nine raised beds in his back yard.

After years of bending down to tend to his traditional vegetable garden, Rich Sankovich decided that he’d had enough.

“I grew tired of the constant rototilling, weed pulling, crop loss and the sheer amount of labor I was putting into gardening before, during and after the season,” said Sankovich, who lives off Middle Road in Frederick County.

This year marks the third that Sankovich has grown vegetables in his raised bed garden. He grows beans, onions, snow peas, squash, tomatoes, cucumbers, beets and peppers and will plant carrots with his granddaughter soon and said the raised beds take up about a third of the space of his previous garden but still produce the same amount of vegetables with better quality.

His previous garden came with the hassle of digging through clay and rocks, but the raised beds eliminate those issues.

When he built the beds, which take up about 252 square feet, he found he’d need about a foot of dirt in each bed for the vegetables to grow. A quick estimate showed he’d need about 12 tons, or 24,000 pounds, of sifted topsoil.

He had the topsoil delivered and placed in his driveway. He said he and his wife, Barbara, filled one bed a day for nine days to complete the work one October.

In addition to the topsoil, Sankovich uses mushroom compost as the lone fertilizer for his garden. Rather than simply placing the compost on top of the dirt, he said he rakes it in with his topsoil “so the roots could get to the compost quicker.”

None of the work involved needing a rototiller, he said.

Sankovich said he has been involved in developing conservation areas and projects — soil, water, air, power, fluids, natural gas and recycling — since 1981. He’s also been a member of the Winchester-Frederick County Conservation Club for over 25 years, on the  board of directors for 10 years and the club's secretary for the past nine years.

Raised garden beds have been known as being environmentally friendly and praised for their versatility in the fact that they can be placed almost anywhere as long as certain city or county codes allow it.

Not only are they known to cut out the work that goes into maintaining a flat garden while being “environmentally responsible,” but they can also help keep down water costs for those hooked up to city or county water supplies.

Sankovich said one reason that could be the case is because you’re able to water the beds and the plants more efficiently in a raised bed.

“The saturation planting practices, you’re not watering empty dirt. You don't have all that waste in space,” he said. “If I had lived in the City of Winchester or (had been) tied to Frederick County water and sewer, the savings from water and sewer alone would be substantial as the cost of sewage is at least five times the cost of water.”

Not only can you potentially save on some utility bills, but your wallet will feel better in terms of overall upkeep, Sankovich said.

“The cost to buy the materials and screened topsoil and fabricate the frames with my labor was offset and slightly more than the cost of a new 5 to 7½ horsepower rototiller, as I’ve owned six rototillers and borrowed two more than once over the past 42 years, plus paid to have them serviced multiple times,” he said. “I wish I had started the raised beds 43 years ago.”

Sankovich, who began his love for gardening around the age of 8 while tending his father’s garden in Johnstown, Pennsylvania, wrote a book detailing the process that he used to construct and maintain his nine raised beds. The 23-page book, “Simplistic Raised Bed Vegetable Garden,” will be self-published and could be made available on Amazon soon.