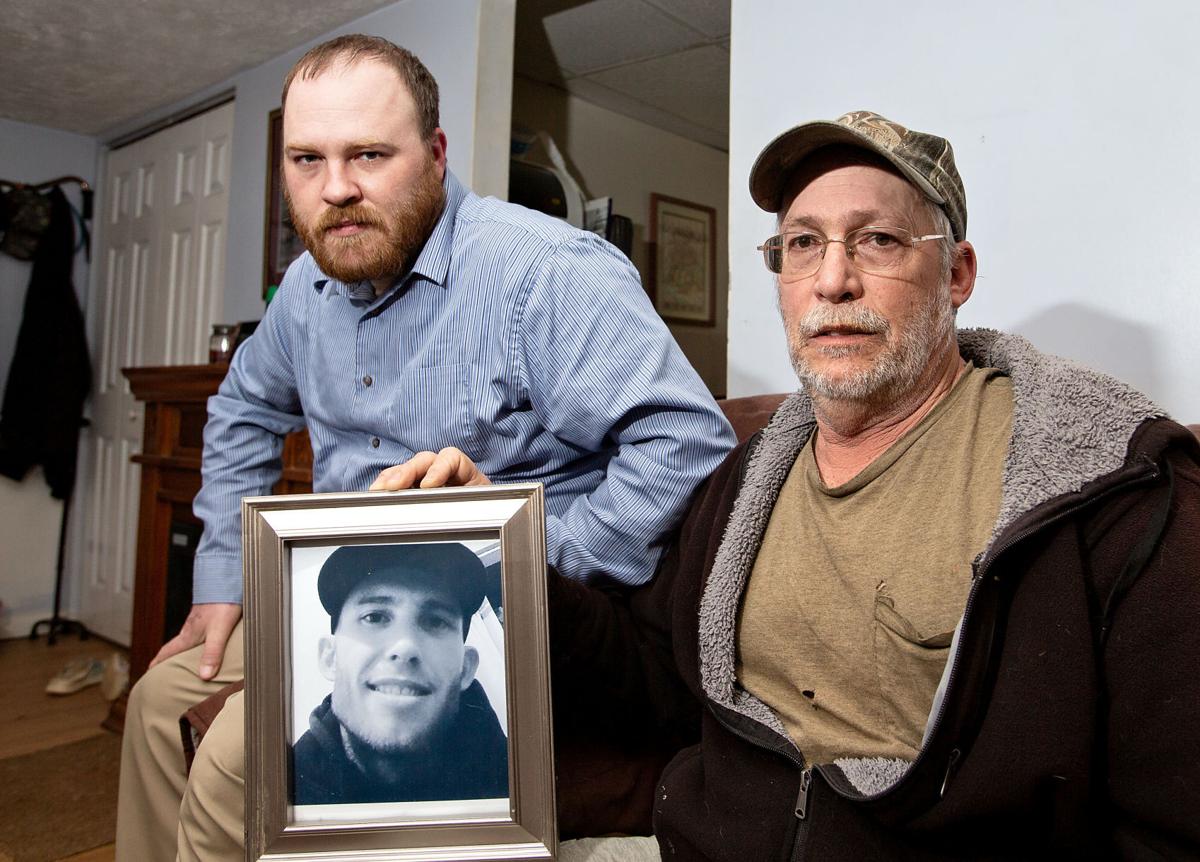 Stephen Smith (left) and his father Steve hold a photo of Stephen’s brother Kevin, 37, in their Front Royal home on April 2. Kevin Smith has been missing since January 2020. 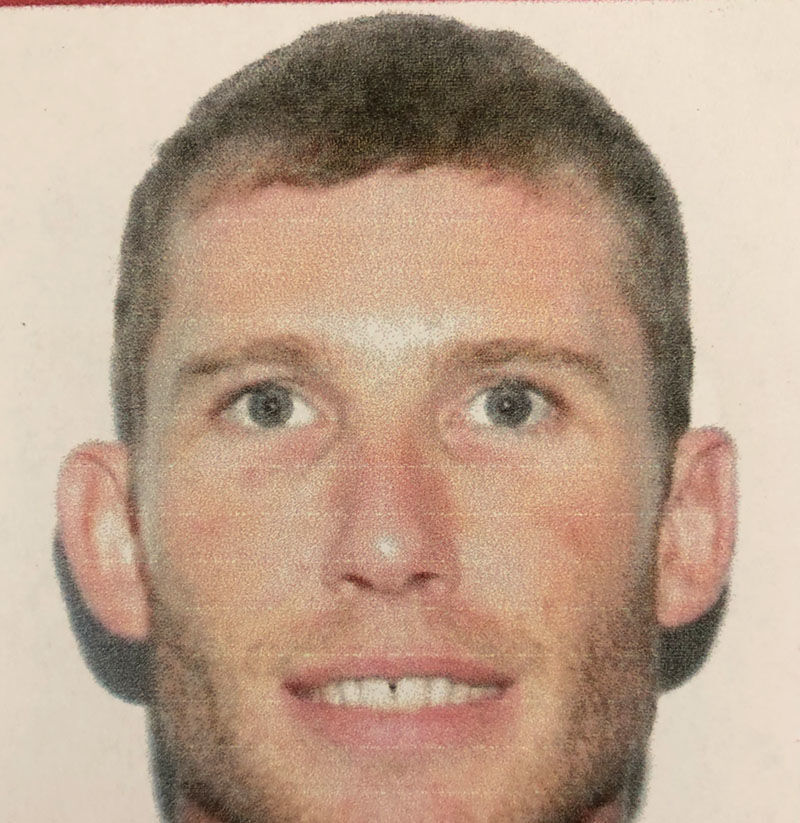 Terry Smith can picture her son riding a three-wheeled bike down a hill with his two daughters in the middle.

“The girls would be just a scream at the top of their lungs, just as happy as they can be," Smith said. "They'd just be wantin' to go again with him."

That’s a memory Terry Smith has of her son, Kevin Smith, who has been missing from Front Royal for a year and three months.

Kevin Smith, a son, brother and father of two children, was last seen on Jan. 19, 2020, according to the Front Royal Police Department. His 37th birthday was in March.

Terry Smith, 57, and Kevin's father, Steve, 60, said prior to his disappearance, he had completed a 6-month prison sentence for violating the probation he was on for drug charges.

He was headed toward Maryland with two guys from Winchester and a woman from Warren County when they stopped in Centreville to fix a flat tire, his parents said.

He walked away from the group, "and then was never seen again," Terry Smith said.

After releasing information about Kevin Smith's disappearance and media attention afterward, Front Royal Police Capt. Crystal Cline said her department has no leads or updates about what might have happened to him.

"No one has come forward with any credible leads or information to determine exactly where he is...nothing," Cline said. Her department would welcome any information, as small as it may be, as it could break the case wide open, she said.

Kevin Smith was initially listed as missing under suspicious circumstances, as opposed to endangered circumstances, according to a previous Northern Virginia Daily news article.

It wasn't unusual for him to stay with friends, not at the house, and he always called his mom to let her know where he was at and what he was doing, Terry Smith said. The family reported him missing after not seeing him for a week and not being able to get in touch with him by phone, Terry Smith said.

"So when he didn't answer his phone for me, then that's when I knew something was wrong," she said.

Fairfax County police canvassed the area where he was last seen. They looked in homeless shelters in that area and found no trace of him, Terry Smith said. Video footage showed Kevin Smith in the Fairfax County area before he left without a trace, a Front Royal detective told the Northern Virginia Daily about a month afterward.

Kevin Smith's father wonders if the people who were with his son knew what happened and aren't saying anything.

"I think they're holding back. I think it's just a matter of time before one of them talks," Steve Smith said.

But “the people he was with were cooperating,” Terry Smith noted, explaining they visited the Smiths' home looking for him a few days after he walked off.

The family has received several tips and passed them on to Front Royal police detectives, but nothing has panned out. The tips range from potentially seeing him somewhere to people saying he’s in a trunk somewhere, Terry Smith said.

“We get the bad stuff, too,” Terry Smith. She’ll go visit anywhere he might be, noting that her son's looks are unusual.

The police have been doing the best they can, Terry Smith said, noting different detectives have been assigned to the case after others have been promoted or moved on to other cases. Each new detective assignment, she said, brings a fresh perspective to the case.

The people Kevin Smith was last with have been interviewed several times, Cline said, adding that it's frustrating that people haven't come forward with information about what happened.

“As time goes by, it gets less and less in the forefront,” Cline said, noting the pandemic happening last year as well as other matters. “Someone somewhere knows something. That's just frustrating. I would love to give the family answers.”

Terry Smith said she has communicated with The AWARE Foundation, a Roanoke-based organization that posts flyers and news articles about missing people on social media.

Kevin Smith did have a drug problem, which in addition to interactions with the legal system led to some distancing from his brother, Terry Smith said. She described him as a quiet, reserved boy while growing up who started to come out of his shell more and became very friendly and sociable as he grew older.

"Kevin's had his trouble. He's got his demons, of course. But Kevin's always been the type of person, no matter what, he'll give you the shirt off his back,” Terry Smith said. “There's no way he would want to take off and not be here for his little girls."

Growing up, he played soccer and Little League baseball, appearing in several all-star games and throwing a no-hitter in one of them. In his later years, he enjoyed the outdoors, like floating down the Shenandoah River with a friend, Terry Smith said.

He appeared to be getting back on track after the drug use, his brother Stephen Smith, 39, of Front Royal, said. A father of two himself, he and his wife have been in communication with the mother of Kevin’s kids, whom they stay with, Stephen Smith said. He will help with having Kevin's kids visit their grandparents and keep Kevin's side of the family in their thoughts, Stephen Smith said.

“The biggest joy I would have is for his daughters to see him again,” Stephen Smith said. “They just want their daddy.

“I would love nothing more than to just give him a big hug right now. Just tell him how much I miss him," he said.

"It's been absolutely devastating, mainly the closure for my mom and dad,” Stephen Smith said.

Having a service or vigil to remember Kevin Smith had not crossed her mind, Terry Smith said, as by having one, that would indicate he’s not coming back. She’s hoping he wasn’t harmed and is all right, she said. If for whatever reason he is deciding not to return home, she hopes that he changes his mind and does so,

"It's like anything with the grieving process, I guess. It gets a little easier over time,” Terry Smith said. “It's always there. We're always thinking about him...we're still trying to find him, of course; we're always going to try, but we know we're not so naive to things that the longer it goes on, that the harder it's going to be."

Smith is described as white, 6-feet, 3 inches tall with hazel eyes, short brown hair and a scruffy beard. The Front Royal Police Department can be reached at 540-635-2111 if anyone has any information on the case.