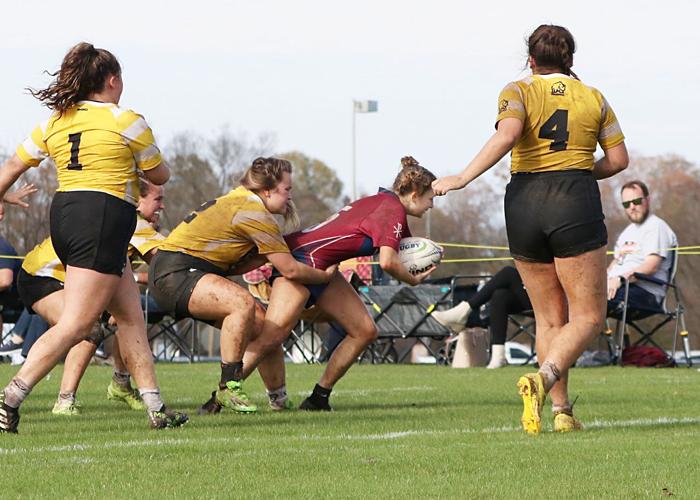 Front Royal resident Logyn Shollenberger, center, prepares to score during a game for Lee University this season. The senior and her Lee University teammates will be playing in the women's rugby small colleges national semifinals in Houston, Texas, on Dec. 3 and 4. 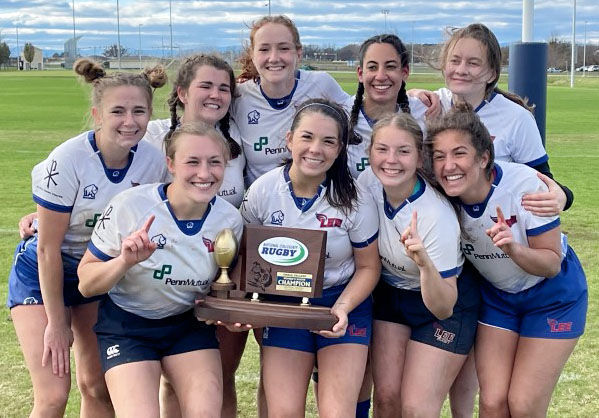 Front Royal's Logyn Shollenberger, back row far left, and her senior teammates pose for a picture after winning the women's rugby small colleges regional title on Nov. 13 in Culpeper. 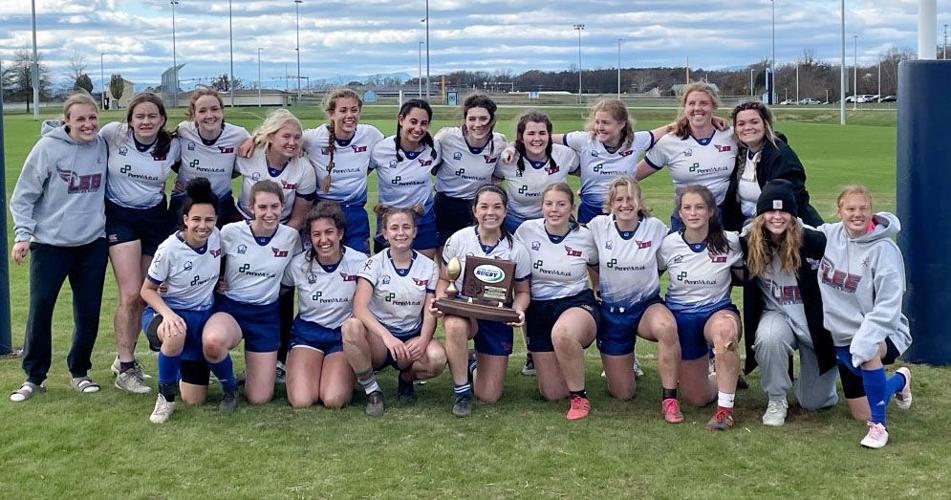 Lee University's women's rugby team with their trophy after winning the regional title at Culpeper on Nov. 13.

Front Royal resident Logyn Shollenberger, center, prepares to score during a game for Lee University this season. The senior and her Lee University teammates will be playing in the women's rugby small colleges national semifinals in Houston, Texas, on Dec. 3 and 4.

Front Royal's Logyn Shollenberger, back row far left, and her senior teammates pose for a picture after winning the women's rugby small colleges regional title on Nov. 13 in Culpeper.

Lee University's women's rugby team with their trophy after winning the regional title at Culpeper on Nov. 13.

Logyn Shollenberger wasn’t planning on playing sports in college when she went to Lee University. But last year she decided to give women’s rugby a try and it’s paid off for her and Lee University, which is located in Cleveland, Tennessee.

The Front Royal native and 2020 Fresta Valley Christian School graduate and her Lee University teammates will be playing in the 2022 National Collegiate Rugby Women’s small colleges final four in Houston, Texas, on Dec. 3 and 4.

“It is a huge accomplishment to be able to play in the final four,” Shollenberger said. “And I am beyond ecstatic about the opportunity to play with this team.”

Shollenberger said she missed playing sports and decided to give rugby a try last season.

“My friend and I had gone to a men’s rugby game and decided that we wanted to try the sport out for ourselves,” Shollenberger said. “So we went to practice the next day and fell in love with the sport. I missed playing a sport competitively and being part of a team and rugby filled that role for me.”

Shollenberger said she loves playing with her teammates and enjoys the atmosphere of the sport.

“The thing I enjoy the most about playing rugby is the atmosphere that surrounds the sport and the girls I get to play with and against,” Shollenberger said. “I have played many sports up to this point, but none of them have the community that rugby has. We have people cheering us on and watching our games from all over the place and in all stages of life. The girls I play with are amazing women and I learn something new from them every day. The girls I play against are all supportive and very talented. It is a tough sport to play and can get rather competitive, but at the end of the day everyone is understanding and usually friendly.”

Shollenberger plays at fullback for the Flames. She said she loves playing at that position.

“Being a fullback and being in charge of the whole field can be stressful at times, but I enjoy getting to see my team flourish,” Shollenberger said. “I feel like I have greatly improved on my chase tackles in the backfield and my offensive play is getting to a place where I feel confident. One of my favorite things to do is just outrun the other team and juke a few girls out in their back field. Nothing beats the feeling of breaking a girl’s ankles. I am still learning a lot about the game and my position, but I definitely think I have stepped up and made myself useful on the field and I cannot wait to continue to learn and grow as a player.”

Shollenberger said the Flames are undefeated this season. She said she was a little nervous at the start of the season, but they’ve had some players step up after losing players to graduation.

“The girls really stepped up and our freshman have made major impacts on the team,” Shollenberger said. “Watching the team grow has meant so much to me as a player and as an athlete and the success we have achieved thus far is a blessing, but we have worked so hard for it. It has been an honor to watch the team make it this far and continue to learn new skills and improve every game.”

The postseason started for the Flames on Nov. 12 and they beat St. Bonaventure 31-10 in the first round. Then on Nov. 13 they beat East Stroudsburg 36-17 to advance to the final four. The first two rounds were played at the Culpeper Sports Complex in Culpeper.

Shollenberger said it was nice being close to home.

“Being able to play close to home is a wonderful feeling,” Shollenberger said. “I had the best game of my life that first game and getting the opportunity for friends and family to come watch and support me is such a blessing, because they already do so much in my life and I would not be who I am today without them.”

Shollenberger said it was an amazing feeling watching the final seconds tick off the clock and celebrate going to the final four.

“When those final minutes were ticking off the clock in the final regionals game, I was filled with excitement and a sense of pride for both myself and my team because I knew we were going to Houston to win a championship for our school,” Shollenberger said. “I cannot even describe how amazing it felt and the pure joy and pride that ran through my body.”

Shollenberger said she’s really proud of her squad, and the season has been filled with many memorable moments, including wins over some D1 colleges.

“Some memorable moments so far have been watching our freshman step up to the plate and show us all how talented they are, in their respective positions,” Shollenberger said. “And watching one of my teammates, Ava Zopf, absolutely break this girls ankles on the sideline. She slid a solid five feet and Ava went on to score a try.”

Lee University will play St. Scholastica on Dec. 3 at 10 a.m. in the first semifinal. Endicott plays Northern Michigan in the other semifinal. The championship game will be held on Dec. 4 at 10 a.m.

Shollenberger said the team will need to play together, but she’s confident they can win the national title.