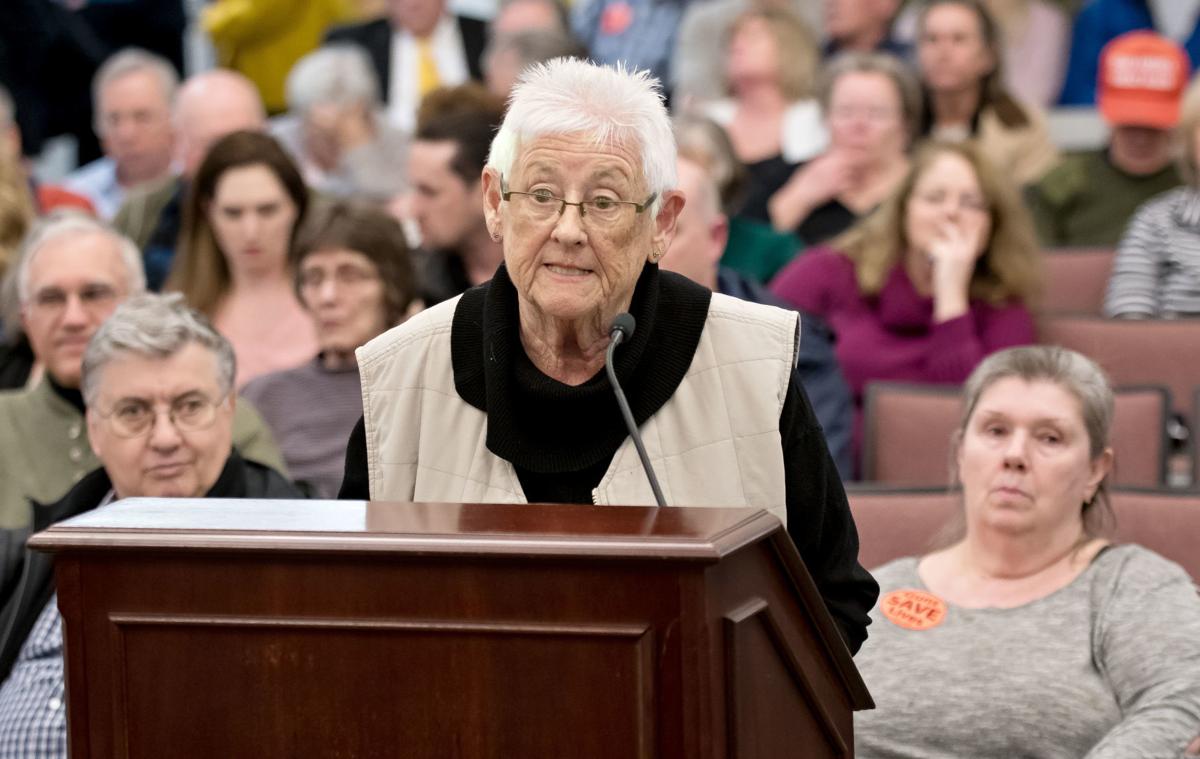 Resident Marie McDaniel speaks during the public comments period during Monday night’s Town Council meeting in Front Royal.  She called the Visitors Center "Front Royal’s heart and soul" and encouraged the council not to “lose it.” 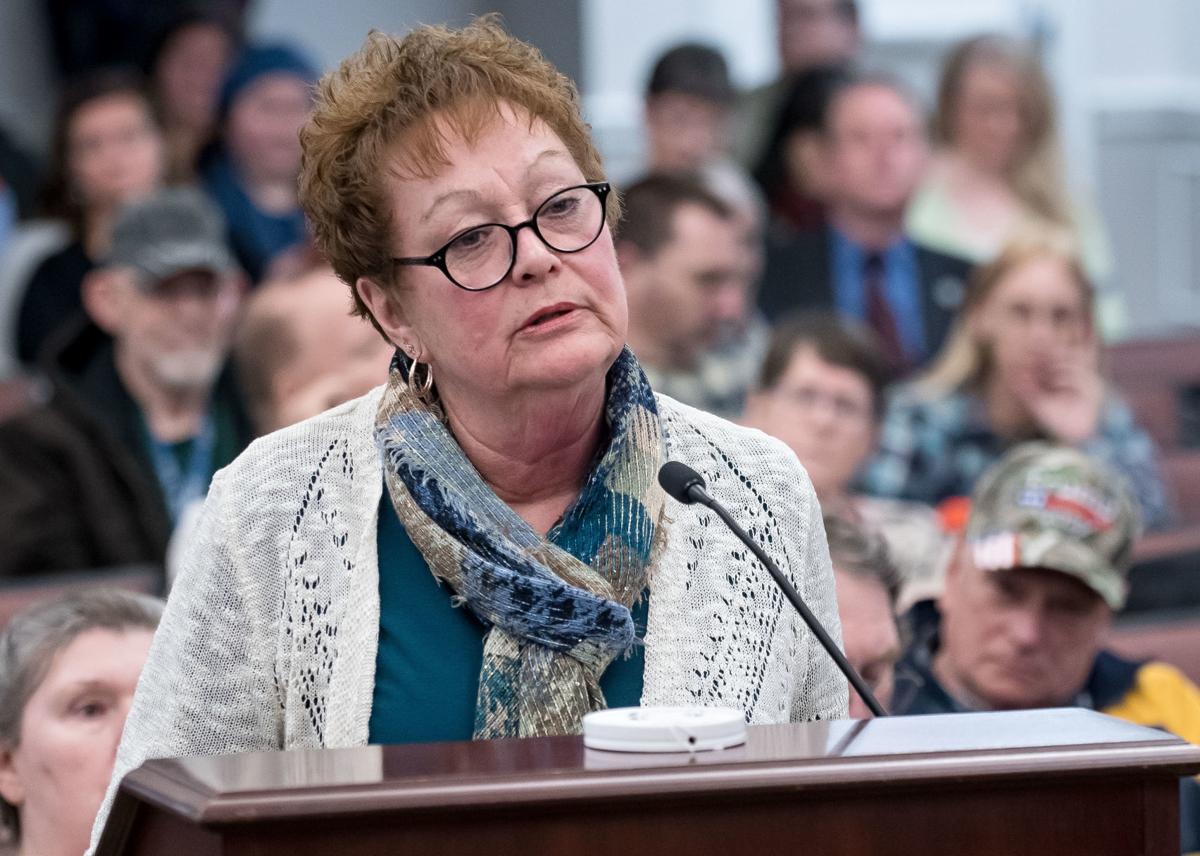 Janice Hart speaks during the public comments period at Monday's meeting. She called the staffing “fiasco” a “very clever disguise.”

Resident Marie McDaniel speaks during the public comments period during Monday night’s Town Council meeting in Front Royal.  She called the Visitors Center "Front Royal’s heart and soul" and encouraged the council not to “lose it.”

Janice Hart speaks during the public comments period at Monday's meeting. She called the staffing “fiasco” a “very clever disguise.”

FRONT ROYAL – The Town Council on Monday heard from over 20 citizens, most of whom expressed umbrage regarding Interim Town Manager Matt Tederick’s budget proposal that includes the outsourcing of tourism to a private entity.

Others terminated include planning and zoning employees and the town’s engineer. The budget also proposes a half-cent real estate tax decrease and that $29 million be dedicated to infrastructure improvement.

During a Monday comment period that spanned about 1 1/2 hours, Jim Hart said Tederick reminds him of the famous puppeteer Jeff Dunham, at which point Town Councilman Jake Meza interrupted with a “point of order.”

“Guess who his puppets are?” Hart responded.

“All I’m saying is Tederick is controlling what you all say,” Hart responded.

Janice Hart said the staffing “fiasco” was a “very clever disguise” and the town’s true focus is providing water for a parcel of land near the Target shopping center. She also theorized that consolidation of the town and county governments is “near and dear” to Tederick. She claimed that Tederick and all council members desire consolidation because “each of you stands to gain from this in one way or another.”

Meza again brought forth another “point of order,” noting that some citizens’ language violates “proper rules of decorum.” He noted that Robert’s Rules of Order – a set of policies for governmental meetings - states that speakers must maintain a courtesy tone “and should avoid injecting a personal note” while never attacking or making “any allusions as to the motives” of council members.

Stephen Schlesinger said he had “this great thing all written out” but Meza “had to ruin it for me” through his point of orders. Schlesinger then said that “Mr. T” is “a very narrow-minded individual.” Tewalt told him to “say what you have to say but I don’t want it in that tone of voice nor do I want it addressed to Mr. Tederick.”

Schlesinger went on to voice opinions opposing the proposed outsourcing of tourism.

Bruce Rappaport agreed that he “had some other things that I wanted to say” before Meza read Roberts Rules of Orders. Rappaport said “in censorship we trust” – a reference to the “In God we trust” on the wall above the council’s dais. Referencing manufacturing experience, he said the town would lose control of tourism with “horizontal integration."

“When you go horizontal, you’re really at the mercy of your suppliers and your contractors and you never really know what you’re gonna get, sort of like a box of chocolates,” he said.

Rappaport added that outsourcing would open up doors to possible “fraud and corruption” and any private entity would prioritize profit above residents’ needs.

Ben Ranieri thanked Meza for bringing up Roberts Rules of Order because “you all sit up here getting railed against for an hour-and-a-half.” While he does not agree with all of the council’s decisions, he said he believes “you have our best interest at heart.” He added that “hundreds” of county residents support the council’s decisions and he wanted to serve as a voice for those did not attend the meeting.

“You all are very capable people and I expect you to take everything that these good people have told you into consideration and make the decision from there,” he said.

Marie McDaniel, who moved to town about a year ago, said the area has become special to her as everyone has been very welcoming. To give back, she decided to volunteer at the Visitors Center, which she said is “Front Royal’s heart and soul” and encouraged the council not to “lose it.”

Sonja Carlborg said Tederick’s budget proposal was a “classic sales technique” in which his suggestion fell between “two extremes.” She added that the proposal invoked a “false sense of urgency” and a “lack of alternatives.” She also noted that a tax cut now may mean a large increase in the future.

“I’m no budget expert but if even an amateur can pick up these red flags...better go back to the drawing board. I want to see people on my council that I can trust,” she said.

Melanie Salins compared Tederick to “a house sitter” who decides “to start knocking down walls and renovating the house.” She also compared him to a chef who serves someone’s favorite meal on a garbage can lid instead of a plate. She suggested that the town ask for citizen input regarding how taxpayer money is spent.

“The community wants to focus on healing but now this happens… This constant chaos is like continuously picking a scab and never allowing it to heal. You can’t earn the trust of the public if you constantly put them into a frenzy of chaos,” she said.

Gary Kushner said an interim town manager should prepare options for a permanent manager. Kushner added that Tederick should be directed to only identify potential areas of change that would later be considered by his replacement.

"Such actions would contribute to regaining public trust and reducing unnecessary drama in our community," Kushner said.

Not all of the speakers spoke negatively about Tederick and the proposed budget.

Amber Morris complimented the council for working toward the betterment of the town. She read the definition of “manager” by saying: “It’s a person responsible for controlling or administering all or part of a company or a similar organization.” She said she appreciates Tederick not “just sitting there” and “twiddling” his thumbs while waiting for his replacement.

“My apologies that you’ve seem to become the Trump of Front Royal. You’ve come in to do a job that you were asked to do, you were appointed to do. You were asked to clean some stuff up, you worked at the discretion of the council and there’s conspiracy theory after conspiracy theory and downright accusations and personal attacks thrown at you every single day no matter what you’ve done since you’ve been in your position,” she said.

She added that she appreciates “the budget being scrubbed” and elimination of “any vigorous spending” before a tax increase is considered.

“Letting employees go is never easy and almost never personal. It is and was a business decision,” she said.

Wendy Kurtz noted that Tederick “is very well respected in this community” and “people were begging him to run for mayor, and I’m not going to sit here and listen to people be disrespectful.”